Listen while you read! Mark Kemp, Our State’s official soundtrack maker — and a former music editor at Rolling Stone — curated this tribute with a selection of Cat’s Cradle performers from the 1970s to the present.

To play Cat’s Cradle, one child creates a symmetrical mesh of webbed string on both hands — a cradle — then transfers it carefully to the hands of another player. It’s an ancient game that can go on for as long as a player can form a new shape with the string, never losing the original connections. 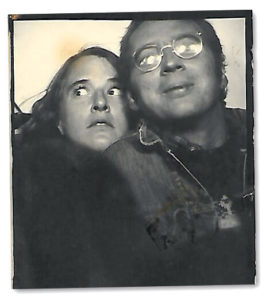 It all started with the vision of Marcia Wilson, pictured with business partner Bill Smith. photograph by Bill Smith

In Chapel Hill, a different kind of Cat’s Cradle becomes a web of music, passing hand to hand and changing shape across the years, but never losing its original connections, nurturing a generation of musical artists who spread their talents far and wide.

It begins with the vision of Marcia Wilson, a young woman from the Eastern Shore of Maryland and a granddaughter of Julius Forstmann, who made his fortune with a New Jersey woolen mill. Greenwich Village in the 1960s is exploding with a revival of folk and traditional music, fueled by singer-songwriters and acoustic bands. Wilson checks out the lively music scene with her brother Stevie and is inspired to open her own club — and, on the advice of friends, explore college towns in the Southeast. She opens Cat’s Cradle in Chapel Hill with two partners, Mike Cross and Larry Reynolds, both well-known local songwriters. She finances the project with a modest inheritance.

“It started out in the basement of a furniture store — Ogburn’s furniture market,” recalls Bland Simpson, who plays the Cradle often over the years. The store, which fronts Franklin Street, is built into a hill so that the basement, large enough to hold an audience of about 60 at card tables with mismatched ladderback chairs, opens onto Rosemary Street on the north side. The space is spartan with no decor, just a small stage in a corner and a piano tucked offstage. “It was just like, you know, they moved the old furniture out one day, and there was a music club there the next day,” Simpson says.

Chapel Hill is hungry for such a venue. Besides fraternity house parties, only a few clubs in the vicinity offer live music — such as Cafe Deja Vu and the Pier, along with the Frog and Nightgown, a jazz room and restaurant, at The Village Subway in Raleigh. Cat’s Cradle becomes an immediate hit, popular with both musicians and music lovers. “As far as a venue out in the community,” Simpson says, “the Cradle was pretty central.”

Wilson’s original partners soon leave the business, and she is joined by Bill Smith and composer Jim Wann. Initially, “we were dreadful businesspeople,” Smith later writes in Chapel Hill magazine. “We bounced checks, and our taxes were always late. The beer companies made us pay in cash.” The lion’s share of the cover charge always goes to the performers.

Before long, the Cradle faces eviction for being too loud. A builder, George Tate, comes to the rescue, offering space in a new building that he is erecting a block or so down Rosemary Street. Beginning in 1973, that space becomes home to the expanded Cat’s Cradle, behind Dip’s Country Kitchen, a soul food restaurant — “a match made in heaven, I always thought,” Smith writes.

“You went to the end of the alley, you faced right, came in the door, and you’re right in the bar,” Simpson recalls. A window provides a view of the music room, accessed by a separate door. Patrons can hang out in the bar and converse with friends without interrupting the performers. Inside the main room, a builder has crafted hexagonal dark wooden tables. 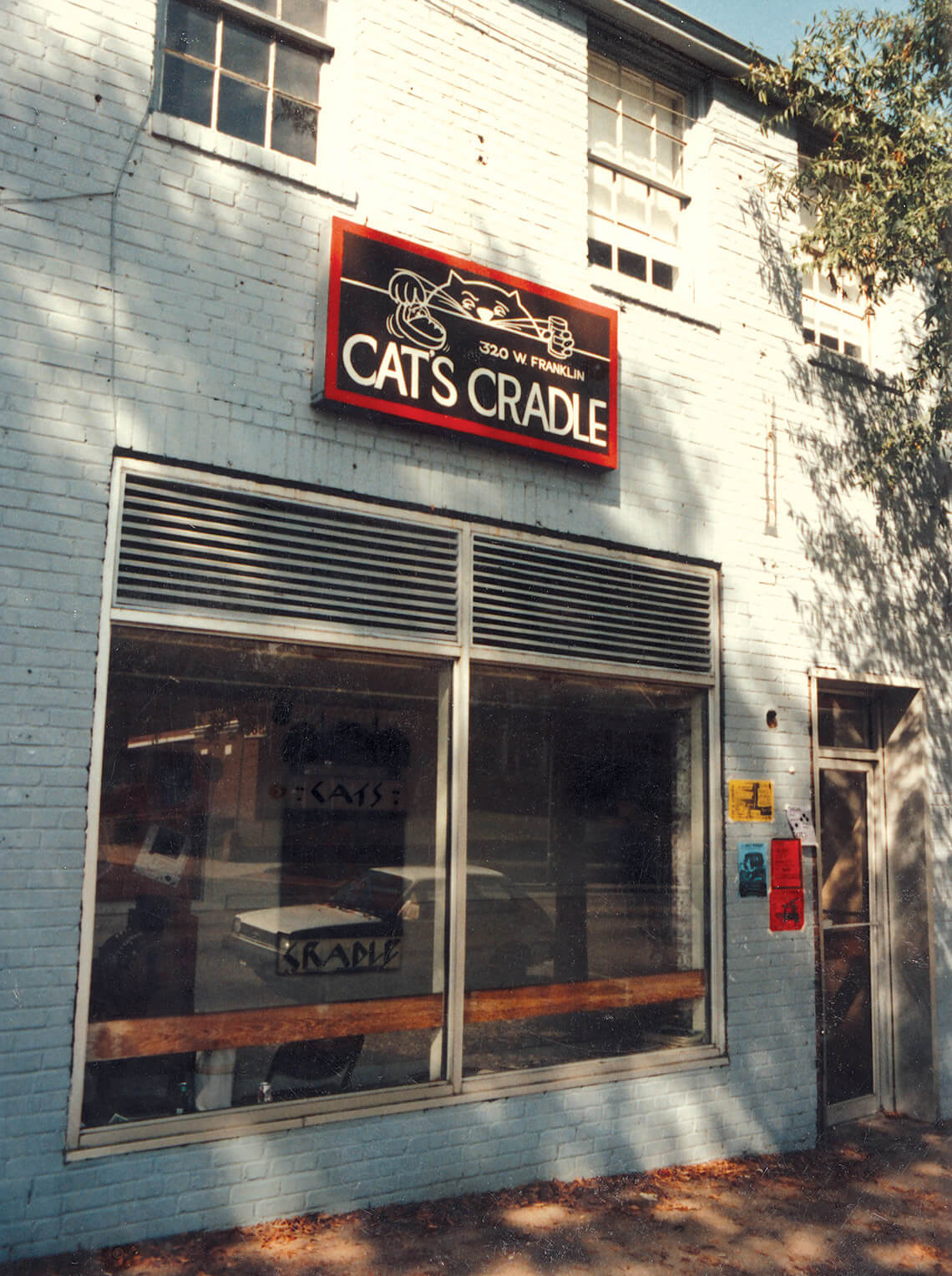 Whatever its address, including this 1983 location on West Franklin Street, Cat’s Cradle drew fans and musicians alike photograph by CHAPEL HILL HISTORICAL SOCIETY

On many weekends, the Cradle features national touring acts such as the Roche sisters, Ranger Doug and Riders in the Sky, Hazel Dickens and Alice Gerrard, Dave Van Ronk, Tracy Schwarz of the New Lost City Ramblers, and Taj Mahal.

More than just an entertainment venue, the Cradle is a social hub, a place where fans call out song requests to the bands on stage, peppering the applause with good-natured heckling, as Simpson recalls. “If you yourself were up there and you’d just done a sweet run on the guitar, somebody might yell out, ‘Pretty good, Phil — now take your gloves off!’ ”

Marcia Wilson is a lively, gracious presence at the club, her hair often pulled back in a ponytail. Though not a professional musician, she loves to sing. “Marcia had a beautiful voice and would perform occasionally herself,” Smith recalls. “She had perfect pitch and was a master at harmonies. Marcia was a wonderful, goofy, generous soul.”

“She sang with a funny group of friends and fellow travelers, and they called themselves the Nicotones and Natal Throes,” Simpson remembers. “They had a nutty repertoire.” One of their most popular numbers is “Lili Marlene,” the old World War II standard. The Nicotones often perform with the Everyman Theater Company, which produces offbeat versions of classics like Shakespeare’s As You Like It.

More than anything, the Cradle is a place for young performers like Simpson to mature on stage. “Everybody was trying stuff out and working stuff up,” he says. “It was home base.” 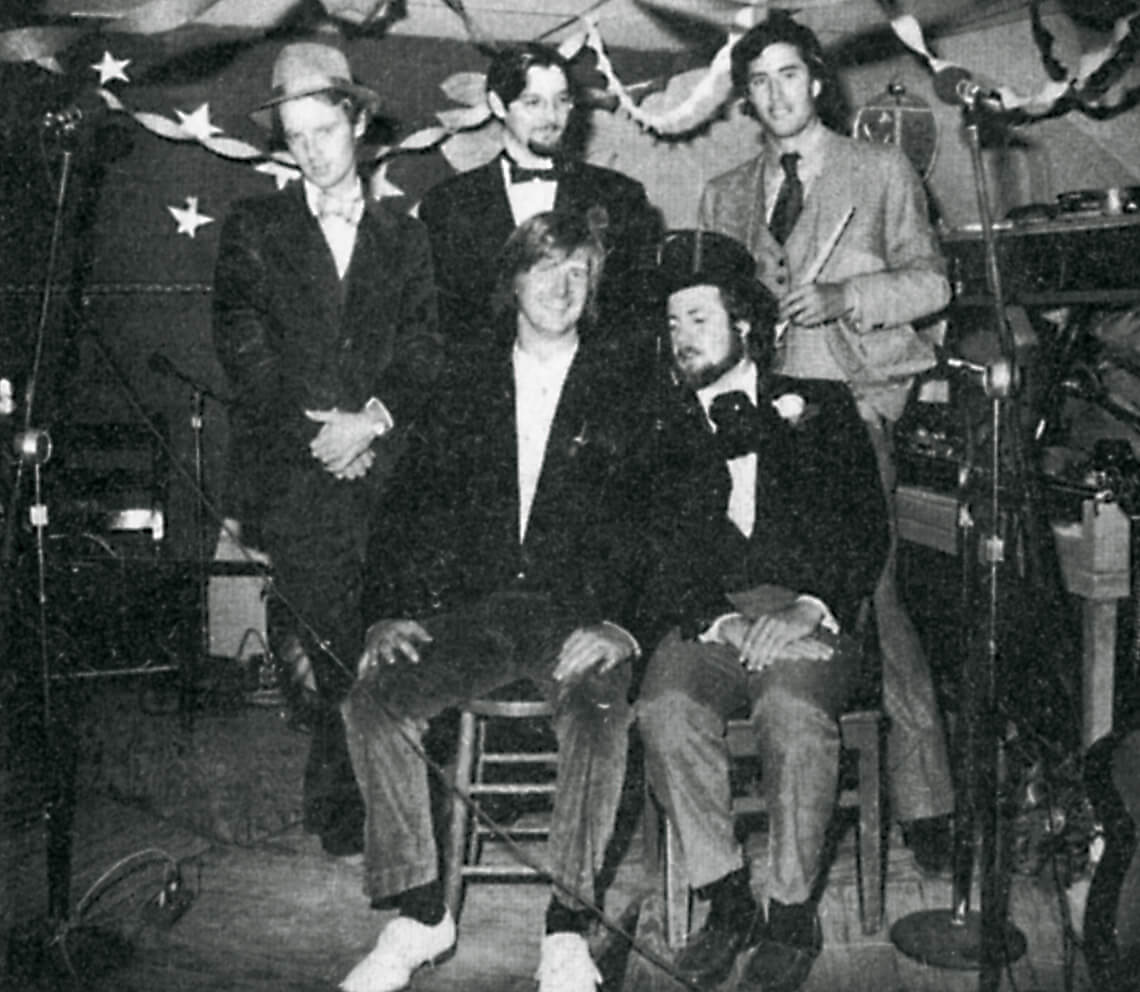 In 1974, Simpson and Wann team up to write a musical based on the life of Jesse James. They try out their new material at the Cradle, shaping a narrative in songs for friends and fellow musicians until they have created a complete show called Diamond Studs. That fall, Southern States Fidelity Choir combines with The Red Clay Ramblers to stage a handful of performances in Chapel Hill before taking the show to the Chelsea Theater Center’s Westside Theater, an off-Broadway venue in New York City.

“‘Diamond Studs,’ which is something called ‘a saloon musical’ … turned up trumps with five aces and a full house of jokers,” writes New York Times reviewer Clive Barnes. “It is unadulterated delight … what a lovely legend it is to spend an evening with.” The review exults “in the musical richness of this funny and sassy score” and awards the players a sincere if backhanded compliment: “The actors are musicians. They act horrifically, but they play like angels auditioning for Gabriel.” Barnes predicts that the show “will deservedly become a cult.”

Eventually, Wann moves to New York, and David Robert takes his place in the Cradle partnership. Then, on November 13, 1979, Marcia Wilson is killed in a car crash in Wilkes County. She is just 31 years old. Her death comes as a devastating blow to the Cradle’s tight-knit community.

Robert enlists two new partners: Walter and Virginia Penley. Meanwhile, friends and musicians gather at Cat’s Cradle for a memorial service. Someone remarks that there are lots of missing faces, musicians who knew Marcia well and played the Cradle regularly. “I remember someone making the point that the Ramblers were on the road; I think Arrogance — Dixon’s band — was on the road,” Simpson remembers. “People who would have been there couldn’t be there because they were out on tour, and I remember someone making the point that it was a tribute to her — to Marcia — and to the club that some of the people, some of our friends who would have very much liked to be there, were on tour, that the club helped propel them into the broader world. I mean, this is not hindsight — this was something we felt in the moment.”

To Simpson’s mind, the success of Diamond Studs began at the Cradle, where he and the other musicians tried out the songs, honing their performances, incubating the show among friends and neighbors before taking it to New York. “To accomplish it — you know, the distance is 525 or 535 miles from Chapel Hill to 43rd Street and Ninth Avenue,” he says. “But in terms of how close was the Cat’s Cradle to the old German Baptist Church that had become the Westside Theater, the distance was not very far at all.”

No longer an out-of-the-way college town, Chapel Hill is now a coveted stop for national touring bands — and has sent its own musicians, nurtured at the Cradle, out into the world. In the 1980s, the venue changes hands again when Frank Heath takes it on, stabilizing the business model and eventually moving it to an expansive new home in Carrboro. Defying the odds, it keeps growing in stature and reach. Bluegrass, folk, old-time, and country-rock shows expand into more experimental genres including punk and indie-rock, with shows over the years by The dBs, Superchunk, Squirrel Nut Zippers, Carolina Chocolate Drops, Hippo Campus, alt-folk-rockers Thao & the Get Down Stay Down, psychedelic soul group The Black Pumas, all-female AC/DC cover band Shoot to Thrill, and many others. In 2019, the Cradle celebrates its 50th birthday with a series of performances by an eclectic mix of hometown bands, including Steep Canyon Rangers (bluegrass), Solar Halos (metal), Archers of Loaf (indie rock), and Flyin’ Mice (blues rock). The towns of Carrboro and Chapel Hill jointly declare 2019 the “Year of the Cradle.”

And the music plays on.