Capt. James Edward Reeves had not been scheduled to fly today — Wednesday, September 11, 1974. But he plans to spend his 49th birthday — next Friday — with his family and has traded shifts for this midweek trip and another so he can spend his birthday weekend at home. He’s an experienced hand with nearly 9,000 command hours under his belt.

After flying empty from Atlanta, Eastern Air Lines Flight 212 takes off on time at 7 a.m. from Charleston, South Carolina, with Reeves in command, bound for Chicago by way of Charlotte — one of Eastern’s hubs — and authorized to follow an “instrument flight rules” flight plan. The McDonnell Douglas DC-9 “Whisperjet,” with its two rear-mounted engines, carries 78 passengers and four crew members. Reeves’s copilot is 36-year-old First Officer James M. Daniels Jr., who has logged more than 3,000 flight hours, 2,693 of them in the DC-9. Responsible for cabin safety and service are two experienced flight attendants: 25-year-old Eugenia Kerth and 26-year-old Colette Watson, who today marks her sixth anniversary with the company. It’s a short hop, but the flight attendants serve beverages en route.

“Those boys were precious,” Watson recalls. “One of them asked me for hot chocolate, and I remember thinking, Oh my gosh, the gear’s going down any minute. But I got it for him and took it to him.”

Around 7:22 a.m., the traffic control center in Atlanta radios clearance for Flight 212 to descend to 8,000 feet, and within a minute, the autopilot disengages with an audible sound. First Officer Daniels now takes manual control of the aircraft. For the next few minutes, Captain Reeves responds to directions from Charlotte Approach Control, confirming altitude and approach path. The crew completes a quick in-range checklist.

At 7:25, Atlanta clears Flight 212 for final approach to Runway 36, where five other planes have landed so far this morning. But in between the crew’s technical conversation about adjusting course headings and setting flap angles, there’s a steady stream of talk — what the National Transportation Safety Board (NTSB) will later describe as “conversations not pertinent to the operation of the aircraft.” It goes on: “These conversations covered a number of subjects, from politics to used cars, and both crewmembers expressed strong views and mild aggravation concerning the subjects discussed.”

While the pilot and first officer are conversing, an altitude alert tone signals that the plane is now approaching 6,000 feet. The controller advises the pilot to make a left turn, then directs the aircraft to descend and hold at 4,000 feet. They cross the Ross Intersection, the fix point for final approach, five miles from the runway. The captain calls out the correct minimum altitude required at that point in the glide path — “Ross, five point five, eighteen hundred.” But he is reading the figure from altimeter No. 2 — 1,800 feet — which indicates altitude above sea level. Altimeter No. 1 displays the altitude above field level. The touchdown zone for Runway 36 at Douglas Municipal Airport is 726 feet above sea level.

Reeves begins to see landmarks through holes in the thick ground fog. “Carowinds,” he says.

Daniels responds, “Ah, that tower, would that tower be it or not?” referring to the 340-foot-tall observation tower at the amusement park.

“Carowinds,” Reeves replies. “I don’t think it is. We’re too far, too far in. Carowinds is in back of us.”

Daniels says, “I believe it is.”

The captain now agrees, “… that looks like it. You know it’s Carowinds.”

Reeves lowers the landing gear, and they complete a pre-landing checklist.

A few seconds later, the terrain warning sounds a steady alert tone along with blinking lights — then goes silent. As the NTSB report later makes clear, “The tone and the lights are continuous until canceled by either pilot.”

The DC-9 Whisperjet rushes past its designated final approach fix toward Runway 36 with an airspeed of 168 knots — and, with the flight crew somehow unaware, already 450 feet below the minimum altitude for a safe landing.

The NTSB recovers the final moments: “According to the CVR, at 0733:52, the captain said, ‘Yeah, we’re all ready,’ followed shortly thereafter by ‘All we got to do is find the airport.’ ” Five seconds later, Daniels responds, “Yeah.”

Then, both men shout. The CVR records impact. 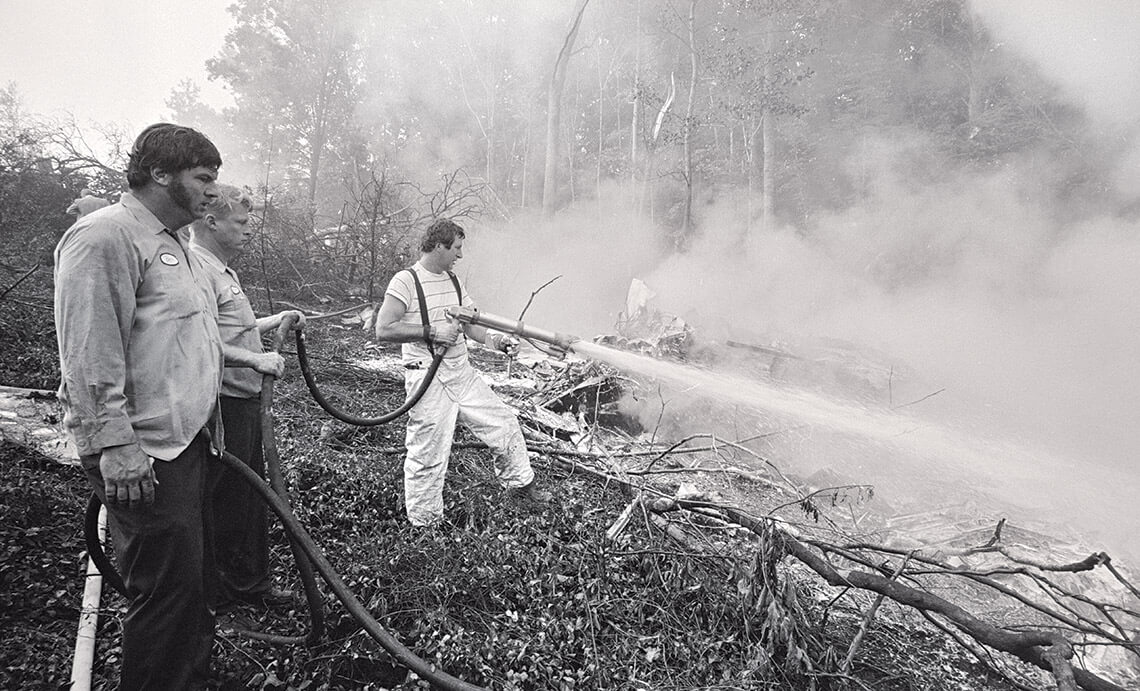 After the crash, the National Transportation Safety Board reported that the Steele Creek Volunteer Fire Department got the fire under control in a matter of minutes. Photography courtesy of THE DON STURKEY PHOTOGRAPHIC MATERIALS (P0070), NORTH CAROLINA COLLECTION, UNC-CHAPEL HILL LIBRARY

Watson, belted into the jump seat behind the cockpit, remembers the terrifying moment: “All of a sudden there was a huge jolt, and the airplane hit and bounced back up twice. And my first thought was, ‘The gear has collapsed’ … I’m looking out at the first-class cabin, and it was already on fire and getting all smoked up, flames everywhere. It was really, really, really a frightening experience to know that all those people were just on fire.”

The DC-9 strikes a grove of small trees 3.3 miles short of the runway. It careens nearly 200 feet across a cornfield into larger trees, the right wing shearing off and leaking fuel. The tail section breaks off. The forward cabin slams to a halt almost a thousand feet beyond the point of initial impact, already burning, the two exit doors blocked by a tree and the ground, the overwing exits blocked by burning jet fuel. The exit in the tail section can be opened, but survivors in the rear of the aircraft are thrown free or escape through holes in the wreckage.

First Officer Daniels suffers “severe impact injuries to both legs and minor body lacerations.” Watson survives the crash with minor injuries. With the galley and forward doors blocked, she tries to jerk open the door to the cockpit — secured against skyjackers by a latch that can be opened only from inside. Daniels releases the latch. Watson and a 45-year-old business passenger named Francis C. Mihalek enter the cockpit.

“I knew that the captain was dead because I heard his death rattle,” Watson recalls. The left window exit is open, and Mihalek — badly burned and lacerated, one arm broken — squeezes through. “He went out that window leg-body-leg, and he stepped on the tree trunk that was blocking my forward passenger door,” Watson recalls.

She scrambles out next and enlists the aid of a commuter who has seen the crash and stopped to help. They reach into the cockpit and haul Daniels out to safety. Then, Watson attends to other injured passengers. She recounts, “I saw a young girl, maybe 18, 19 years old, and she had beautiful red hair, and it was singed to the roots.” Watson lays her down on a passenger’s coat. “She said, ‘I want my mama,’ and she said, ‘Will you pray with me?’ And we said the Lord’s Prayer together.” The young woman dies a week later. 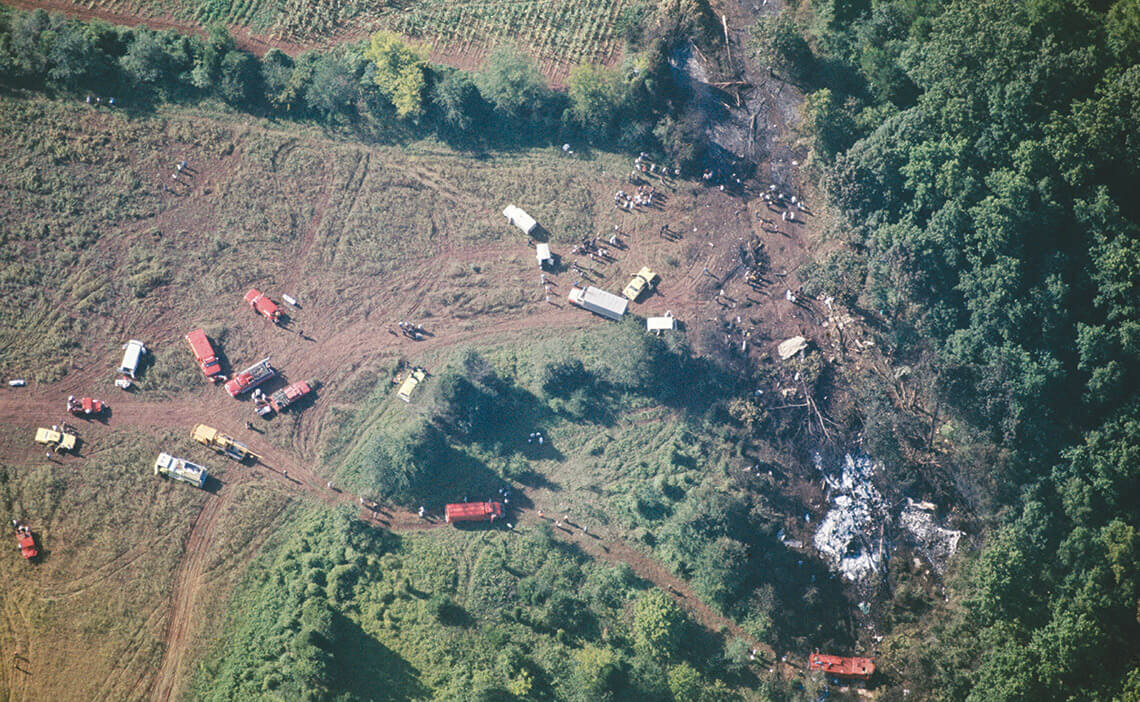 An aerial shot of the crash site shows the aftermath of the accident. Within 45 minutes, all survivors had been removed to local hospitals. Photography courtesy of THE DON STURKEY PHOTOGRAPHIC MATERIALS (P0070), NORTH CAROLINA COLLECTION, UNC-CHAPEL HILL LIBRARY

In all, 72 people are killed, though many survive the initial crash. One of them hangs on for 29 days after the crash before succumbing to “impact injuries and severe burns.” The NTSB calculates the grim tally: 32 are killed on impact — all of the others die from burns, smoke inhalation, or a combination of injuries.

At 7:40, airport emergency services arrive and notify firefighters and rescue crews from the Steele Creek Volunteer Fire Department, who bring the intense fire under control in a matter of minutes and remain on the scene for about three hours. It takes about 45 minutes for ambulances to transport all of the survivors to hospitals.

The crash of Eastern Air Lines Flight 212 is one of the worst in the state’s history, and at the center of the calamity lies a mystery, articulated in the NTSB report: “The Board has been unable to determine the precise reason for the almost total lack of altitude awareness on the part of the crew throughout the approach.”

The extensive experience of both pilots may have worked against them: Rather than being laser-focused on a difficult landing in fog, they seemed, according to the NTSB, to exhibit an attitude that was “lax” and “casual.” Indeed, First Officer Daniels testifies, “The only thing I can say is everything appeared to be normal.”

Ultimately, the NTSB cites the probable cause of the crash as “the flightcrew’s lack of altitude awareness at critical points during the approach due to poor cockpit discipline …”

Unfortunately, the Board finds, such “serious lapses in expected professional conduct” are all too common — as demonstrated by five previous approach accidents. It recommends new protocols to the FAA. The result is the “sterile cockpit rule,” finally codified in 1981: Below 10,000 feet, conversation or other activity not directly related to the operation and safety of the aircraft is prohibited.

The rule is designed to focus a flight crew’s full attention during the critical phases of takeoff and landing, the most potentially dangerous of any flight.

But no rule can bring consolation to the loved ones of those lost on Flight 212. Sylvester Reeves, Captain Reeves’s father, tells a reporter from the Associated Press, “That boy was my pride and joy … For some time now I have had some funny dreams and premonitions, and I just had a funny feeling something was going to happen.”

The Courage to Fly

In an interview with writer Philip Gerard, former flight attendant Colette Watson discusses the tragedy of September 11, 1974, and how it’s taken years to heal from the trauma of the crash. Eventually, she returned to her job with Eastern Air Lines. “When you go through something like this,” she says, “if you don’t face your fear, you’re going to be fearful of everything.”

Find the story at ourstate.com/courage-to-fly.

Coming in October: A flood of urban strangers arrive in Appalachia.