Harvey Gantt was the friendly kid who handed out apples to his playmates when they got bored, just to keep them hanging around, shooting marbles in his yard in Charleston, South Carolina. “I like being around people,” he explains to an interviewer with the Southern Oral History Program years later — after he has made history as the first Black mayor of Charlotte.

His affable manner — an ability to get along well with nearly anybody and an instinct to bring people together — will serve both his artistic talent and his steadfast determination to succeed at his chosen profession: architecture. And it becomes one of his greatest assets as a politician and leader. He maintains, “I just always have this confidence that if I can get you to sit down and look you in the eye, we can talk; we can get to know each other.”

“I just always have this confidence that if I can get you to sit down and look you in the eye, we can talk.”

Gantt was born on Yonges Island near Charleston, the first of five children. The family moved to the city, where his father worked as a rigger mechanic at the navy yard during the war years. They first reside in public housing, then in a home that Gantt’s father built by hand, learning carpentry as he went. Gantt recalls, “Probably I got my first interest in architecture by remembering that he built the house himself and … the house sort of grew with our family.”

His teachers saw his promise early — they skipped him past first grade and enrolled him in second grade. And when they noted his constant doodling, rather than punishing him, they praised the quality of his drawings and encouraged him.

“I’m one of those fortunate people who early on recognized that I wanted to be an architect, and that was in ninth grade,” he tells interviewers. “I can’t even remember wanting to do anything else other than design things for people.”

Charleston, like the rest of the south, was a segregated city. Schooled by his father, a member of the NAACP, Gantt took an interest in the strange contradictions of the world around him. Their neighborhood was integrated, yet kids of different races were not supposed to play together — a rule impossible to enforce. White and “Colored” drinking fountains in public spaces reminded everyone of the separation.

At the all-Black Burke High School, Gantt and a cadre of friends were inspired when four students from the Agricultural and Technical College of North Carolina staged a sit-in at the Woolworth lunch counter in Greensboro.

The Charleston County School Board had recently banned students from taking part in any demonstrations during school hours, but on the chosen day, April 1, 1960, Burke was closed because the teachers were attending a meeting in Columbia. The initial plan was to stage the sit-in at Woolworth, emulating the A&T students. But, wary of events in Greensboro repeating themselves in Charleston, police were stationed outside of the department store, so the students reverted to plan B — the lunch counter at S.H. Kress & Co. on King Street. They were refused service. Orderly and courteous, they recited Psalms and the Lord’s Prayer and sat tight, even when workers poured ammonia on the countertop in an effort to drive them out.

“We trained ourselves to resist the ridicule we would experience.”

“We sat down at S.H. Kress’s lunch counter, after planning to do so for about three or four weeks in selecting our students very carefully,” Gantt recounts. “We trained ourselves to resist the ridicule we would experience.”

The Charleston Post and Courier details what happened next: “Police Chief William F. Kelly ordered the building cleared at 4:45 p.m. after an anonymous caller told police a bomb was scheduled to go off any minute … A search of the building failed to reveal a bomb. Kelly ordered a security guard placed around the building last night.” Police arrested all 24 of the demonstrators and held them in the courthouse before releasing each to their parents on $10 bail and $24 total court costs, paid by the Charleston branch of the NAACP.

The sit-in ignited the Charleston Movement — more sit-ins and a boycott of stores that would not hire Black workers — which would eventually help end segregation in Charleston.

After graduation, Gantt won a scholarship to Iowa State University, an integrated school — an impossibility in his home state. He reasoned that because most architects were white, he would need to have access to both white and Black mentors to get the best education in the field. But the only other Black students he saw there were athletes. Standing in line to register for classes, he himself was assumed to be a football player, which he found degrading.

Before long, he applied to Clemson University, which offered an excellent architecture program.

“I mean, there are times when truth itself sort of snaps its head straight up in my face and you know that you’ve got to go in a different direction,” he explains. “And it was nice to make that decision on a 23-below-zero day in Iowa.”

But when Clemson received his transcripts from all-Black Burke High School, where he had graduated second in his class, the university rejected him. Gantt turned to Matthew Perry, the lawyer who had helped him and his classmates with their sit-in arrests, and filed suit — backed by the NAACP Legal Defense Fund. Gantt lost the suit but won on appeal, and thus became the first Black student enrolled at Clemson. Before long, he was joined by Lucinda Brawley, a young woman he had met while speaking to local high schools — the first Black woman to attend Clemson. Their friendship blossomed into love, and they were married in the fall of 1964. 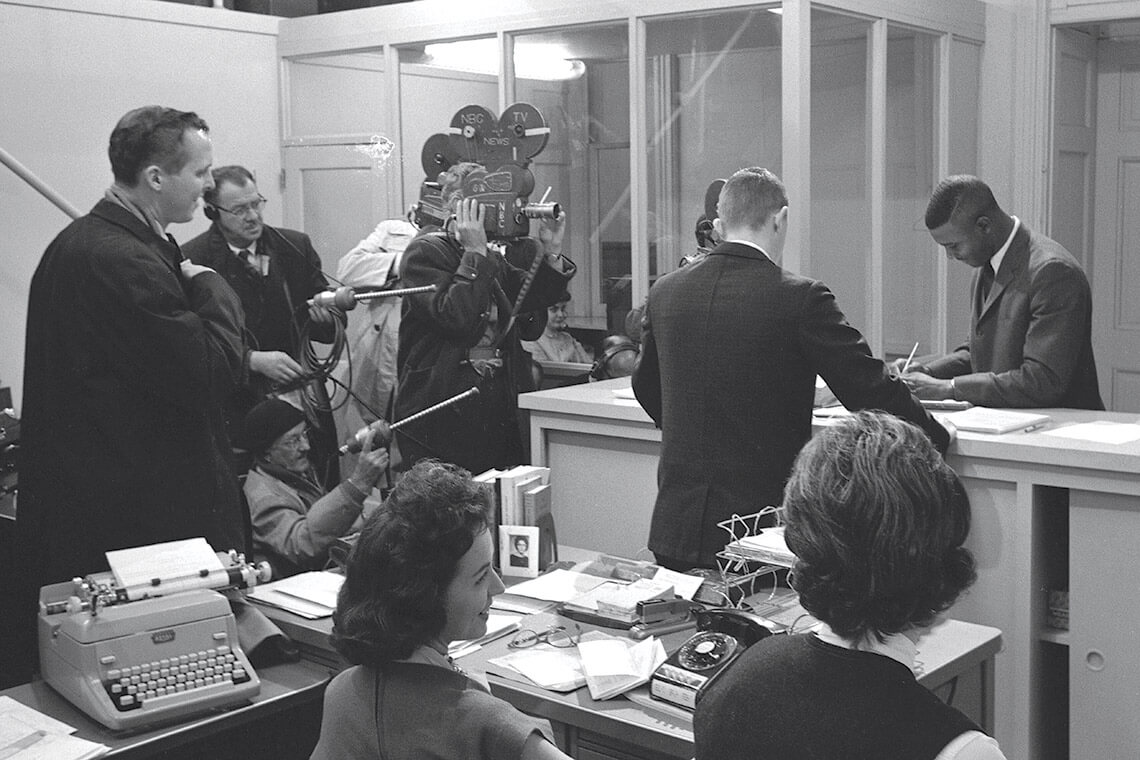 On January 28, 1963, news crews looked on as Gantt filled out paperwork to become the first Black student to attend Clemson University. photograph by CHARLES MOORE/GETTY IMAGES

The following spring, Gantt graduated third in his class of fellow architects, then joined the firm of Odell Associates in Charlotte. “The first time I saw Charlotte I fell in love with it,” he says. “It just had an air about it that said, ‘Hey, here is a place that’s growing. You might be able to grow with it.’”

He went on to earn a master’s degree in city planning from the Massachusetts Institute of Technology, then worked for about 18 months as senior planner on the Soul City project — Floyd McKissick’s quixotic attempt to create a model integrated city in Warren County. “Floyd’s idea of a new town where you built an economic base as an alternative to the welfare state appealed to me,” Gantt recalls. Ultimately, the project was doomed by lack of business investment and hostile press. Gantt returned to Charlotte in 1971 to partner with Jeff Huberman in Gantt Huberman Architects.

Gantt joins a task force addressing planning and development in the city, and soon he is a recognized leader — and appointed to fill the unexpired term of Fred Alexander, the only Black member on the city council. That appointment leads to three more elected terms, and he is named Mayor Pro-Tem in 1981.

In 1983, Gantt is elected Charlotte’s first Black mayor with 52 percent of the vote and serves two terms. Ironically, many of the same white people who vote for segregationist Jesse Helms for Senate also vote for Gantt — a contradiction that Gantt does not find so surprising. “What I’ve noticed in Charlotte is that people believe me, they don’t agree always with me. But when I say it, they believe it, they don’t believe I’m putting them on,” he tells an interviewer with the Southern Oral History Program.

“Some people are always trying to tear things down. I’m an architect, and we build things.”

Under Gantt’s leadership, encouraging cooperation rather than confrontation, Charlotte prospers. He works to preserve neighborhoods and revitalize the downtown center. He leaves behind a citywide recycling program, a balanced budget, and a new NBA basketball franchise, the Hornets.

Gantt’s philosophy of leadership is straightforward: “When you’ve got the people sort of working together, you can get them to put away their thing for our thing, that is, the city.” He aims to turn hard-won racial and social progress into durable institutional change.

In 1990, he challenges three-term incumbent senator Jesse Helms on health care and education. “Some people are always trying to tear things down,” Gantt says in his campaign ad. “I’m an architect, and we build things.” Helms unleashes a series of television ads that stoke white voters’ fears about losing their jobs to affirmative action. 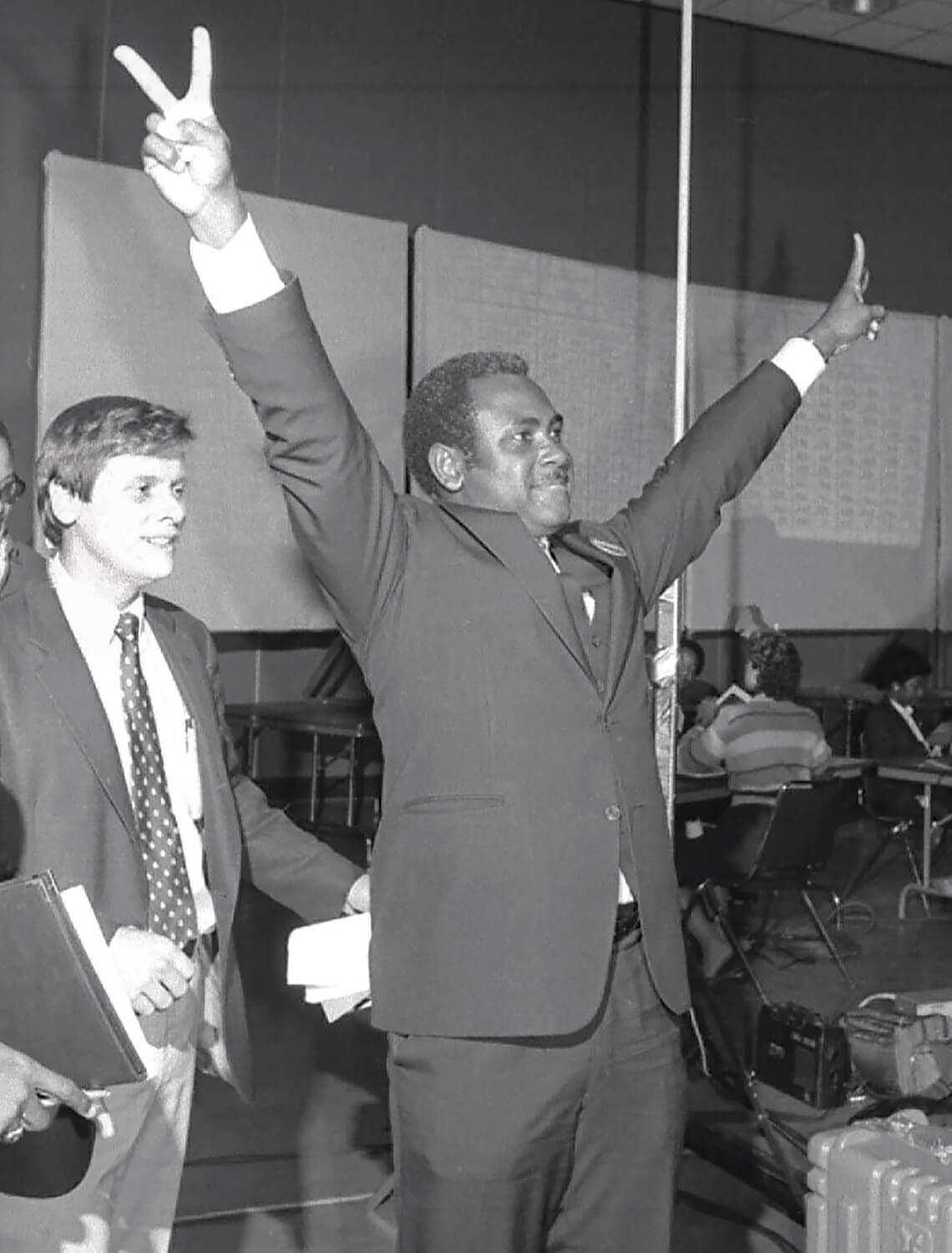 Behind in the polls until the ad runs just before the election, Helms claims a narrow victory. Still, Gantt wins 47 percent of the vote.

Gantt’s reputation in his city remains as durable as the many signature structures he designed. The Charlotte Post honors him with its 2007 Lifetime Achievement Award, and Center City Partners gives him its 2008 Vision Award. Perhaps most significant is the Harvey B. Gantt Center for African-American Arts + Culture, which opens in 2009.

Gantt writes about his initial reluctance to have his name so prominently featured, but ultimately accepts it. “I thought about the enormous history of the residents of the historic Second Ward community of ‘Brooklyn,’ where the Gantt Center now stands,” he writes. “Brooklyn residents often referred to the old Myers School as the ‘Jacob’s Ladder School.’ Its skyward stairway was a visible reminder of the importance of aspiring to greater things and a good education. Not just teachers, but an entire community rallied behind the youth, molding bright minds.”

Encouraging their resolve, letting them doodle their way into their own grand designs.

Coming in December: A white Christmas on the coast.