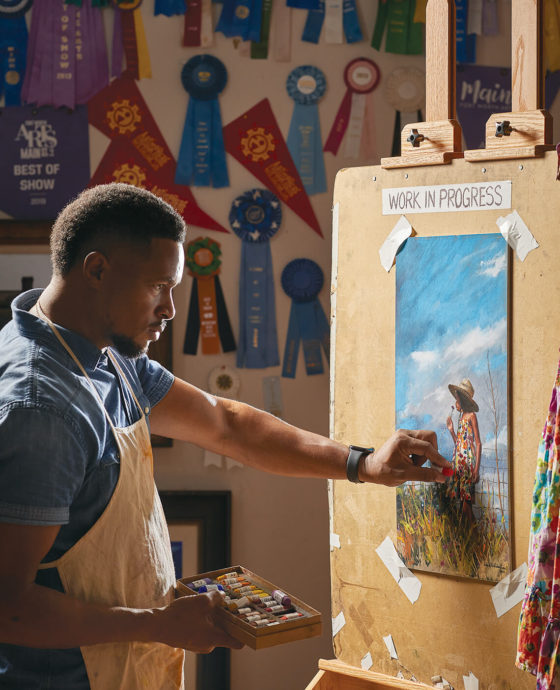 To this day, Richard D. Wilson Jr. regrets letting go of the original. It was not a painting but a photograph — a snapshot of an 11-year-old posing in the hallway of South Edgecombe Middle School in Pinetops. Behind him was a Black History Month bulletin board displaying his drawings of Frederick Douglass and Dr. Martin Luther King Jr. At the top were the words, “Future artist Richard Wilson.” The photo has been lost to time, but even after more than 35 years, the image has never left him. It was proof that others could see in Wilson what he longed to see in himself. “That blew me away,” he says. “I was like, ‘Wow. They really believe in me.’”

Those words of affirmation proved to be prophetic. Today, the 48-year-old artist, perhaps best known for his realistic pastels, has made a name for himself far beyond his native eastern North Carolina: Wilson counts baseball great Hank Aaron and singer Gladys Knight among his collectors. In a studio tucked inconspicuously behind his family’s brick ranch home outside of Greenville, Wilson, whose muscular build is more suggestive of an athlete than an artist, is wearing a black T-shirt featuring his work that pays homage to prizefighter Jack Johnson, and a gold necklace with a pendant shaped like a paint palette.

As Wilson opens up about his life and his work, a recent landscape titled A Window Into the Past — reminiscent of his grandmother’s home in the Martin County community of Robersonville — peers out from behind his shoulders. Almost as numerous as the paintings that surround him — Southern scenes, historical figures, ballerinas fashioned after his three daughters — is the collection of ribbons tacked to the wall. A former National Arts Club Award winner and recipient of the Pastel Journal Founder’s Award in memory of Maggie Price, Wilson took top prize last year at more than a dozen juried exhibitions across the country.

The awards started coming decades ago, when Wilson was growing up about 20 miles northwest of here. In the Edgecombe County community of Conetoe, his father, Richard Sr., worked for a local clothing manufacturer and hand-painted signs for extra income. Young Richard watched and sometimes helped his dad, who had begun college as an art major before switching to math with the hope that it would lead to a more lucrative career. “He used to sit at the table and draw me and my brothers, and we looked like we were about to come off the paper,” Wilson remembers. “That just sparked an interest in me.”

He was still in elementary school when he began getting recognition as an artist. By high school, his art teacher, Martha deWitt, landed Wilson his first commissioned work: a portrait of a football teammate who died in a car crash. The boy’s mother was so moved by the depiction of her son that she gave the young artist four times his $25 asking price. 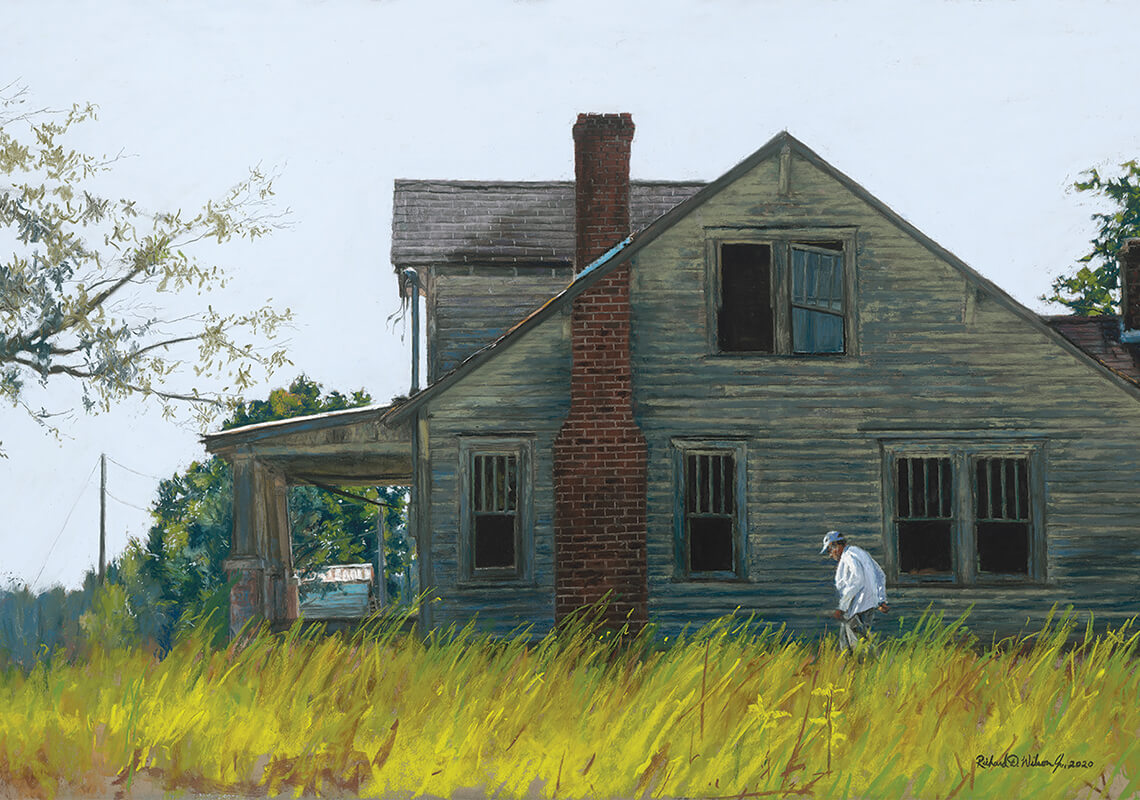 A Window Into the Past (above) is based on Wilson’s memories of his grandmother’s home in Robersonville. He named Jiyah (below) for one of his daughters; the piece is part of Wilson’s “Southern Girl Series.” painting by Richard Wilson 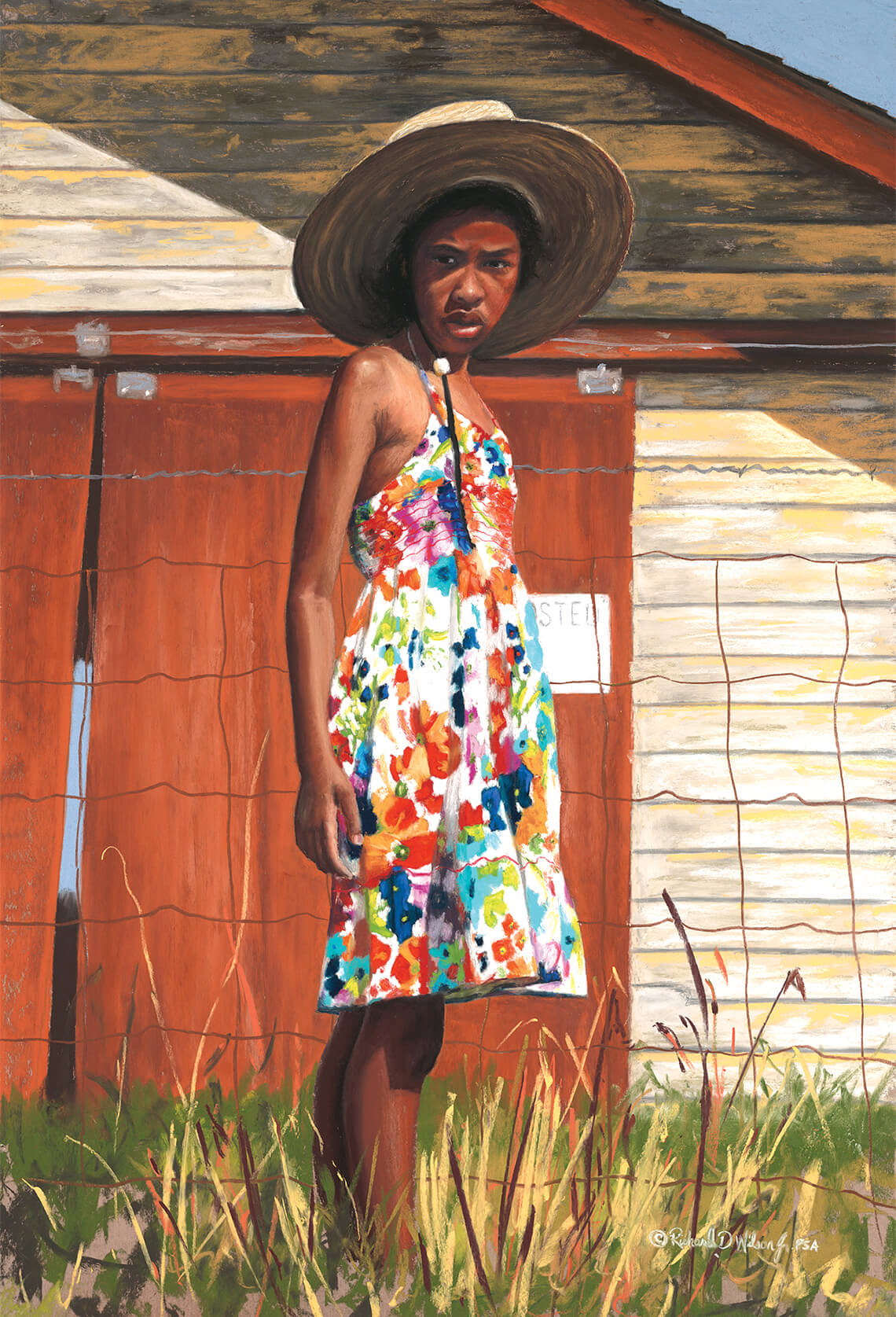 Wilson’s teacher was not surprised that he did such a masterful job working in colored pencils. “It didn’t take me long to assess his innate ability,” deWitt says. “He had that spark, that drive. He always longed to become an artist outright. I never had any doubt that Richard would achieve his goal.”

Wilson wasn’t as certain. In 1990, he enrolled at what is now Barton College to study communication arts, but he left after two years to work as a graphic designer. Later, to support his wife and daughters, he worked a series of unfulfilling jobs, from manufacturing power cables to delivering office furniture. He sought portrait commissions on weekends and drew sketches in the cafeteria during lunch breaks. “People would say, ‘Man, why are you working here?’” Wilson says. “It would be like they’re stabbing me when they’re saying that. It felt like there was nothing I could do about it at that time.”

Frustration builds in his voice as Wilson recalls standing between the loading dock and the railroad track outside of the Edgecombe County factory where he worked, feeling trapped in a place where there was no outlet for his talent. “I was just so miserable I used to cry,” he says. “I would just look up in the sky and say, ‘God, there’s got to be something better than this.’”

Landing a new job in graphic design seemed like an answer to his prayer, but it was short-lived. After pulling together $1,200 to participate in Atlanta’s 2005 National Black Arts Festival, he learned that the job had been outsourced. Had he not paid his entry fee in advance, he would have canceled. “But I’m thankful that it happened that way,” he says.

Wilson brought in an eye-opening $9,000 at that first show. Using a benefit from his job compensation package, he pursued a degree in advertising and graphic design from Pitt Community College in Winterville. Still hoping for a career in fine arts, he turned class projects into opportunities to market his paintings.

Though he graduated at the top of his class in 2007, Wilson did not attend the ceremony. Instead, he traveled to New Orleans, where he was making sales at an art show when a former professor called to invite him to return to PCC to teach drawing. Considering it a more secure plan for supporting his family, Wilson eventually agreed. But after seven years in the classroom, positioning students to pursue their passions, it was time for Wilson to take a chance on his. “It was just a burning desire in me saying, ‘I can’t let it go. I can’t shake it,’” he says. “So this is what I’ve got to do.”

Wilson’s first show after resigning his post in 2014 brought in more than his yearly salary as a teacher, signaling that the artist, at last, was on the right track. As he explains the internal conflict he faced in that decision, he points to his popular painting Faithful Journey, which illustrates the courage required for him to take that step.

The painting, displayed in his studio, is of a reluctant boy being led along railroad tracks by another child determined to reach their destination. In wide-eyed uncertainty, the boy has turned to look back. “The little boy that is looking back, that is a voice that was speaking to me when I was making the decision to quit my job, knowing I have a family,” he says. “The little girl pulling him forward is saying, ‘Let’s go. It’s going to be all right.’” 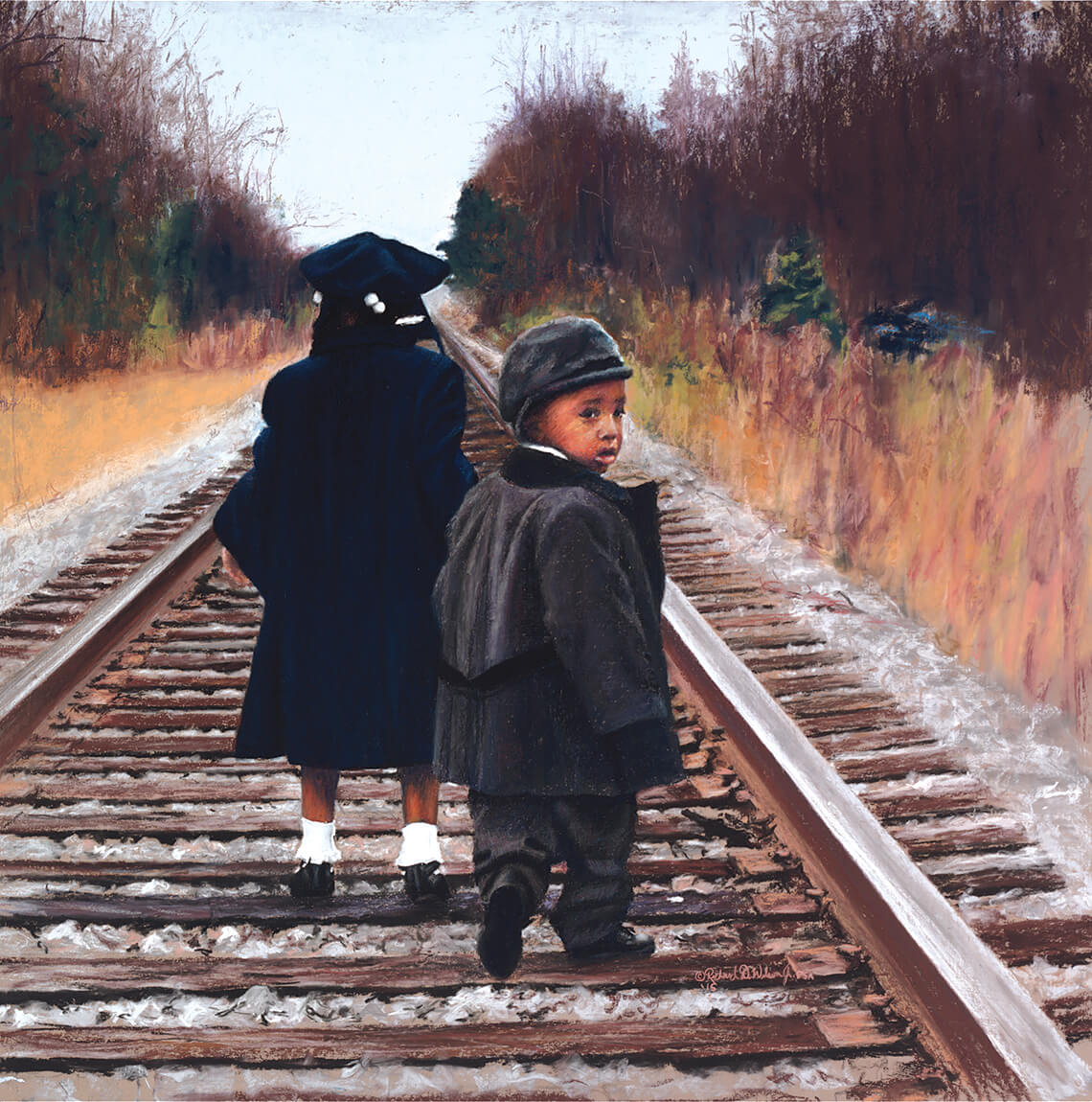 The journey that Wilson chose to take in rural eastern North Carolina has depended on faith — in himself and in the art-loving world. In Faithful Journey, he depicts a child not so sure of his future destination. painting by Richard Wilson

Although the stories that Wilson’s paintings tell are not just for the young, children are frequent messengers in his work. His daughters and nephews are depicted in many paintings, whether the subjects are delicate dancers or broken-down barns. But better-known faces, including jazz great Louis Armstrong and golf legend Charlie Sifford, also make their way into Wilson’s work.

His “Shadow Series,” launched in 2008, brings the aspirations of children and the accomplishments of their heroes together on a single canvas. The works have included famous athletes like Jesse Owens, Jackie Robinson, and Michael Jordan, along with trailblazers Barack Obama and Bessie Coleman, the first Black woman to hold a pilot’s license. In the foreground of each painting is a child with a big imagination and feet still too small to fill the shoes of those who stand behind them. “We need to be inspired,” Wilson says. “That’s what my work is about, especially the fact that I use children. I feel like we need to put positive images in front of them and let them know that they can be somebody.”

With the “Shadow Series,” the former educator also aims to teach a bit of history by weaving in little-known facts about famous figures. A painting of a boy standing in front of a weathered fence with boxer Joe Louis painted on it includes a toy 1952 Chevrolet truck with a golf ball in back, recalling the year the former world heavyweight champion became the first Black golfer to compete in a PGA-sanctioned event.

Like the kids depicted in Jack Johnson (above) and In His Shadow (Michael Jordan) — two works in Wilson’s “Shadow Series” — the artist dreamed of making an impression on the world. Today, Wilson has achieved that dream with his art. painting by Richard Wilson 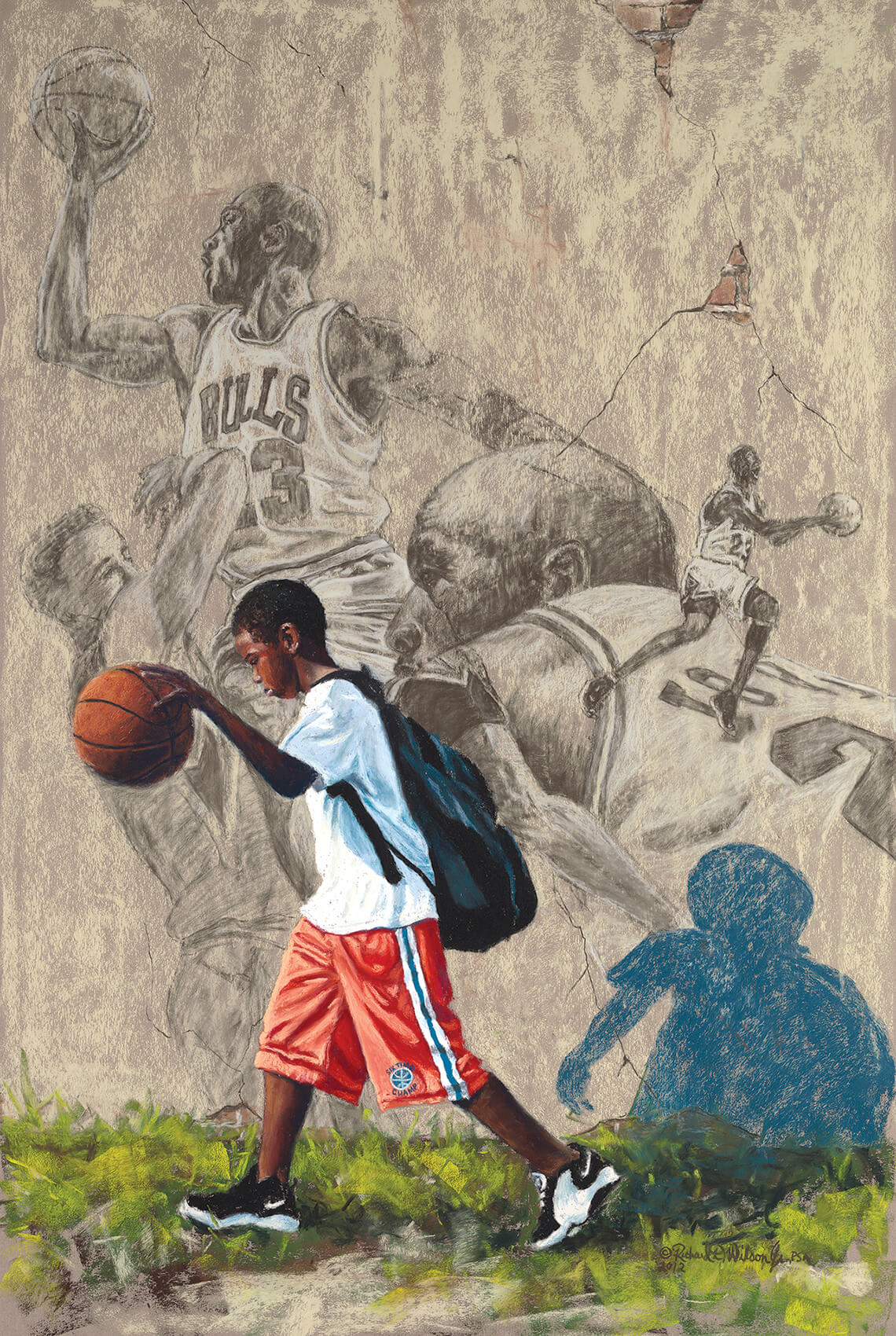 In Jack Johnson, a boy’s oversize boxing gloves show the date of Johnson and James J. Jeffries’s 1910 “fight of the century,” which is represented by faded headlines on worn newsprint. The artist was offered $60,000 for the original, which features the boy craning his neck to glimpse a stitched leather boxing bag hanging just out of reach. Wilson turned down the money in the hope that the piece might one day find its place in a museum rather than a private collection.

“When you go to museums, you never see African Americans,” says Wilson, who is spending some time in his studio researching educator and civil rights activist Septima Clark for another portrait in his series. “I felt like my part was to just put it out there.

“I’m sure there’s somebody just like me that had a talent but didn’t know what to do with it,” he says. “By seeing me, it might give them hope.”