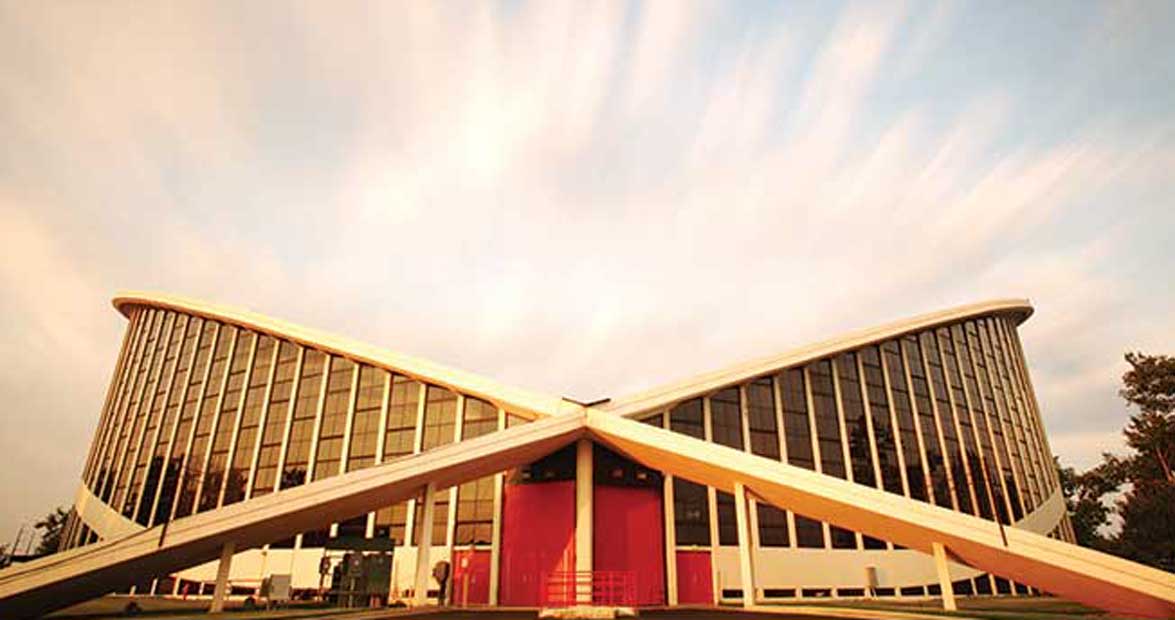 EDITOR’S NOTE: This story was originally published in the October 2013 issue of Our State.

Everybody at the fair meets at the waterfall.

With good reason. The waterfall at the North Carolina State Fairgrounds is wonderful — it’s tall, it’s soothing, and at night, it lights up in pretty colors. Which makes it a shock that of the two structures at the fairgrounds’ central spot, the waterfall is by far the least interesting.

The other is Dorton Arena, which everybody kind of knows about, but nobody really knows about. Yet Dorton Arena happens to be the most architecturally important and influential building in Raleigh, and probably in North Carolina. By a lot. In 2002, its 50th birthday, the arena was dedicated as a National Historic Civil Engineering Landmark, although it’s been on the National Register of Historic Places since 1972. Among architectural types, it’s been famous for way longer than that. When construction was complete in 1952, it won First Honor Award of the American Institute of Architects and the Gold Medal in Engineering of the Architectural League of New York. Five years later, the Milan International Exposition of Modern Decorative and Industrial Arts and Modern Architecture exhibited a model, and the American Institute of Architects called it one of the 10 buildings constructed in the 20th century most expected to influence the future of architecture. Which is exactly what happened, but — Dorton Arena? Our little Dorton Arena? Where Kellie Pickler sang?

You recognize it, of course: It’s the one with the crazy saddle-shaped roof — a hyperbolic paraboloid, as it happens. You might not call it that, though. It is actually sometimes called the “paraboleum,” a word invented either in 1948 by its designer, Matthew Nowicki, acting head of the North Carolina State University Department of Architecture, or by a contest of State College English majors in 1965 — depending on which story you believe. Nowicki (pronounced no-VIT-ski) died in a plane crash in 1950, before construction even began. But it was built, and the world took note.

North Carolinians don’t fuss much about it. If you’ve lived in Raleigh long enough, you probably remember when sportswriters made an effort to get people to call Dorton “The Chip,” or sometimes “The Big Chip,” because to modern eyes, the roof of Dorton Arena looks like nothing so much as a giant Pringles potato chip. Sports guys called it The Chip when the IceCaps — Raleigh’s popular East Coast Hockey League franchise that predated the National Hockey League’s Carolina Hurricanes — played there during the 1990s. The building is not air-conditioned, so the IceCaps used to skate around in the swirling fog that resulted from the surface of the ice meeting warm, humid Carolina spring weather. The ’Caps are long gone: If you want to see sports now, you’ll go see the Carolina Rollergirls roller derby team. It’s hot and humid, but you won’t see fog.

You also might have seen the old ABA Carolina Cougars play there in the early ’70s, and no doubt you’ve seen plenty of might-bes and has-beens there on State Fair evenings, though the George Joneses and Tammy Wynettes of this world have played there, too, as did — believe it — Jimi Hendrix (April 11, 1969).

Now forget all that. Because nothing that ever happened inside Dorton Arena is as important as the arena itself — specifically, how the place works. It all comes down to that Pringles roof, resting atop arcing steel cables suspended from the sides of the building.

As striking as Dorton Arena is from the outside, with its crossing arcs and swooping roof, to stand inside is to enter a kind of warped space. You notice the way the ceiling bends and twists into a saddle, the way the windows and seats climb and fall in a gentle curve, following the shape of the roof. What you may not notice, though, is what made the building a breakthrough. The building’s curves come organically from its construction. Dorton Arena was the first permanent building in the world to support its roof by suspended steel cables, which hang in tension from two 90-foot parabolic concrete arcs that cross, each set at an angle with their feet buried deep in the earth. It’s a little like a suspension bridge, but think instead of an open bear trap, only with the hinge partway up the jaws. That is, the two arcs lean away from each other, their legs crossing about 26 feet above ground, held in place by the steel cables up top — and by more steel cables encased in concrete a dozen feet below ground, holding together the arcs’ feet. The enormous concrete arcs are thus self-supporting, needing no additional columns.

You realize what a dazzling feat of engineering this is once you understand what’s happening. The hanging ceiling meant that the building needed no internal columns, which made it perfect for its function as the State Fair livestock-judging pavilion it was designed to be. It was dazzling enough that when Nowicki died, his drawings — which originally showed no walls or windows at all, just an open-air roof and startling girders angling away from the roof — were too challenging for the people charged with actually building the thing. “The columns were put in just to shut [critics] up,” says facility engineer Bill McClure, who’s been looking after Dorton since 1988. The columns along the sides of the building actually support almost no weight — they just hold up the windows.

McClure tells the story about how the building almost didn’t go up at all. He says the general contractor, William Muirhead of Durham, told him a story and made him promise to retell it. It seems a highway patrolman brought Muirhead the completed contract and escorted him to the worksite, where he was instructed to begin construction. “He got a wheelbarrow and a hoe and dug a hole and poured a little concrete” under the watchful eye of the trooper, McClure says. And when Muirhead drove home, he heard President Truman announce, as a result of the Korean War, a suspension of construction on all projects that had not yet been started. “I’ve been sharing that story for years,” McClure says. “As I promised.”

Dorton went up at a time when Raleigh — and North Carolina — wished to project an image of boldness and advance. “Raleigh’s population was something like 65,000 people,” says Roger Clark, professor of architecture at the NCSU College of Design. “Suddenly here was this building that really spoke of progress and modernity, this emblem that existed in a tobacco-road small town.”

“It could only have evolved in Raleigh immediately post-World War II,” agrees College of Design Dean Marvin Malecha. “The country was surging, here comes this architect from Poland, who really represents this feeling of optimism. It was a real liberal moment: Architecture was making a new way of thinking about things.”

The building has had just as much influence as the American Institute of Architects thought it would. The Ingalls Rink at Yale University (often called “the Yale Whale”), designed by Nowicki’s friend Eero Saarinen, pays obvious homage to Dorton, as does the Saddledome in Calgary, Canada, Clark says. He also notes Saarinen’s similarly spreading design for the Dulles International Airport terminal in Washington, D.C. And even the Gateway Arch in St. Louis is little more than a large version of one of Dorton’s self-supporting arcs. You could call it a block off the old chip?

Malecha sees Dorton’s influence everywhere he looks. “It’s not just a building for Raleigh,” he says. “It’s a statement of Raleigh for the world. A symbol of the progressive attitude, a willingness to explore new ideas. It’s this pure expression of a spirit of the new, the open. You can look at the wonderful new art museum or the new [NCSU] library or the new airport. All of them owe homage to Dorton Arena.”