Along the counter, the salt-and-pepper shakers are palm-size pairs of brightly glazed ceramic tents and campfires, foxes and chickens, and cars hauling camper trailers. The high, swivel counter stools are leatherette, with backs for leaning. Beneath the airy, A-frame timbered ceiling and beside windows open to the breeze and view, tables are arranged on a speckled green-and-gray-checkered floor. Mason jar water glasses sit on paper place mats with fun facts on the front for grown-ups, and activities on the back for the kiddos.

This plain mountain eating establishment, a not-quite-luncheonette and not-quite-diner, hasn’t been designed to resemble a retro restaurant of the ’50s. This is The Bluffs, on Milepost 241 of the Blue Ridge Parkway near Laurel Springs. And as it was then, so it is now. Which is why people often cry when they walk through its door. 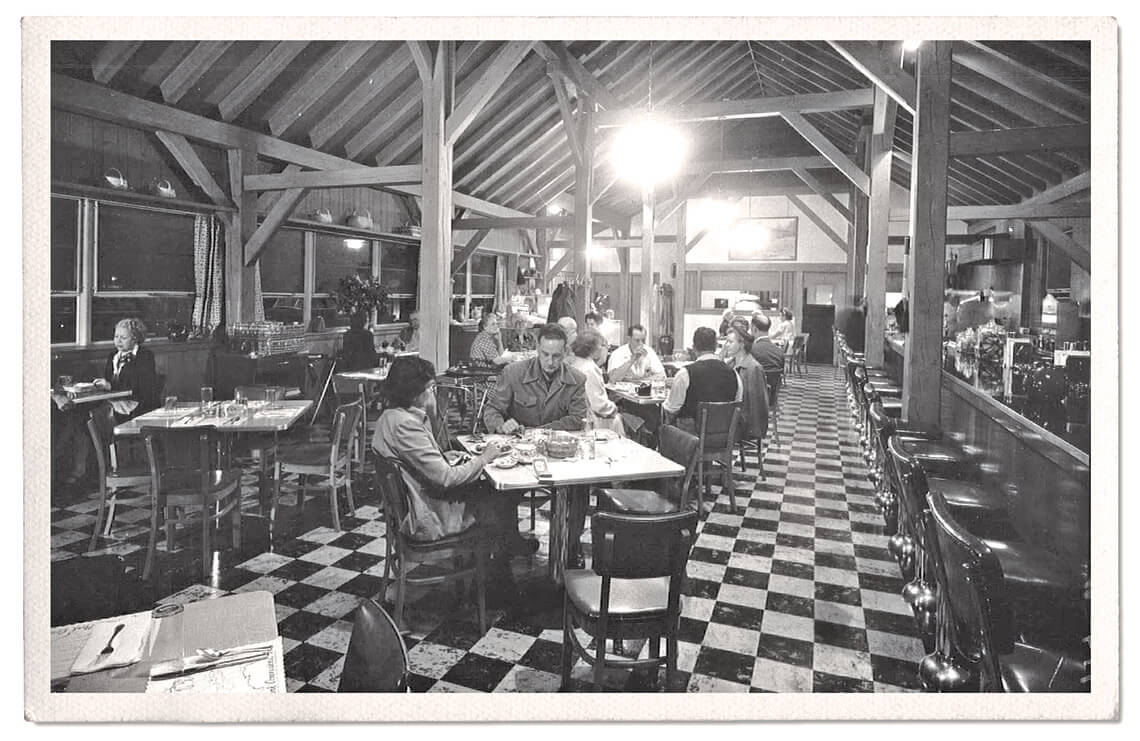 Old photographs of The Bluffs — like this one, from 1952 — helped re-create the original look of the tile floor, stools, and lunch counter. Photography courtesy of National Park Service

Sometimes, something treasured — a locket, a deed, a tobacco barn — doesn’t begin as a treasure. The Bluffs began in the spring of 1949 as the first restaurant on the Blue Ridge Parkway. Named for the 1,000-foot cliff within Doughton Park and once associated with The Bluffs Lodge, the restaurant was originally a coffee shop and gas station. Doughton Park wasn’t even called Doughton Park yet, and The Bluffs was an oasis on the parkway, which was still under construction. Just as it is today, the next parkway eatery in North Carolina was more than three hours away, at the Pisgah Inn in Canton. By the ’50s and ’60s, when road trip vacations were at their height, The Bluffs was routinely so mobbed that park rangers had to direct traffic, as depicted in black-and-white photographs. 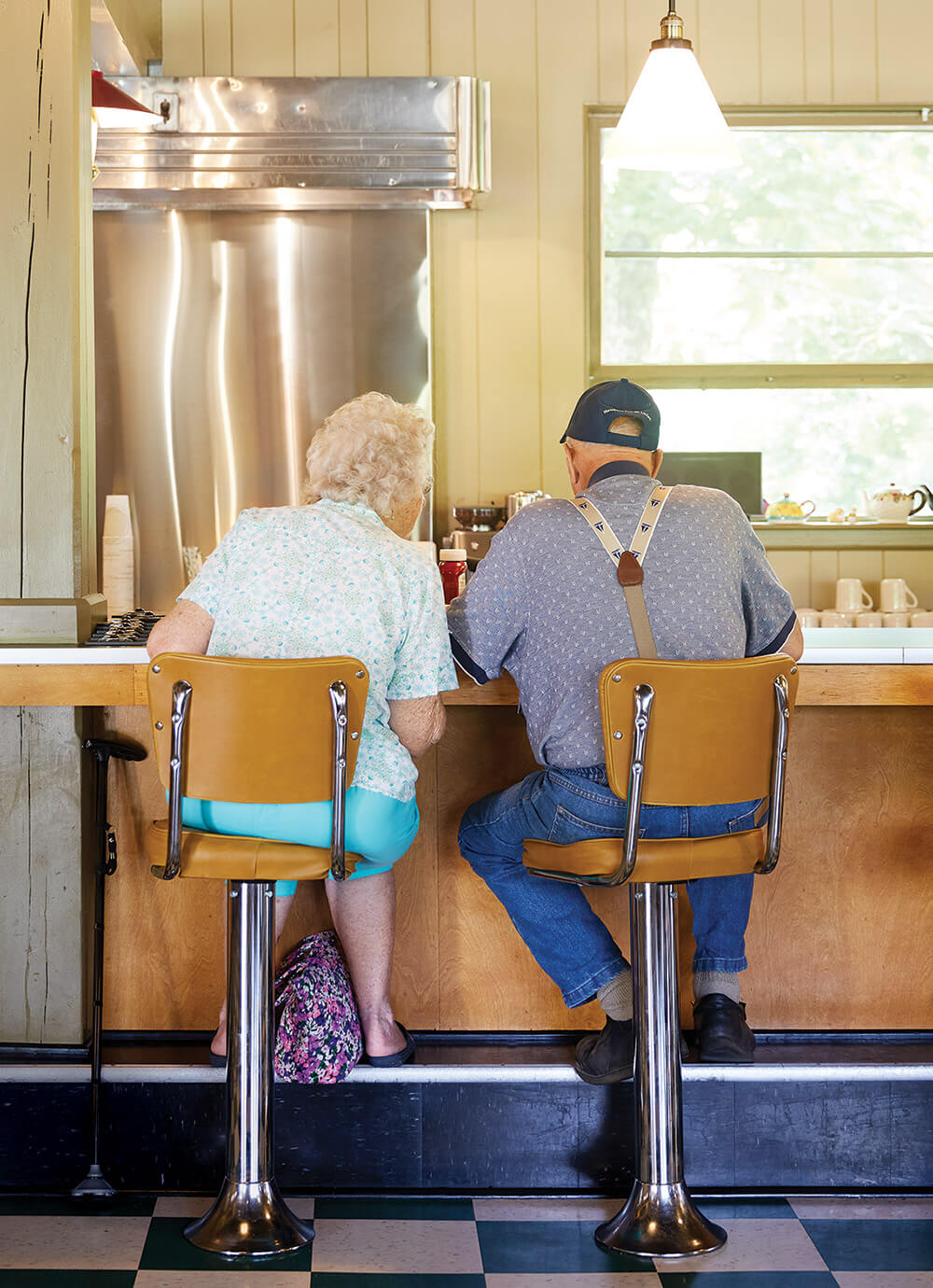 Carol and Mack Weatherman — visiting from Jonesville — know that the unassuming stone building on the Blue Ridge Parkway promises a comforting meal and a hot cup of coffee. photograph by Stacey Van Berkel

And then, in November 2010, after 61 years, The Bluffs closed. The restaurant’s operators didn’t renew their contract with the National Park Service. Waitress “Miss Ellen” Smith, a 61-year employee, took off her apron for the last time. Generations mourned, left with nothing but their memories to console them.

The building languished, fell into disrepair. The roof leaked, the tile floor molded, and the plumbing and electrical systems became outdated. But affection for The Bluffs, and what the restaurant meant to so many people — a gathering spot on annual summer visits, morning coffee for locals, a camper’s respite promising a homestyle meal — never waned.

In 2016, fundraising efforts through the Blue Ridge Parkway Foundation began. It would take nearly a million dollars to restore the restaurant. “A community of stewards saved The Bluffs,” says Jordan Calaway, chief development officer for the foundation. Public funding assisted, of course, from the State of North Carolina, the Appalachian Regional Commission, and the National Park Service, but Calaway was “as happy to get a wad of ones from someone” as she was to receive a check for $10,000. Some 500 individuals responded, such as the woman from Maine who’d visited every summer with her parents and donated as a way to honor them.

Blue Ridge Parkway explorers stop for a meal at The Bluffs just as they did decades ago. photograph by Stacey Van Berkel

Dollar by dollar, donation by donation, word of mouth and devotion to a place and time allowed repairs and interior reconstruction of The Bluffs to begin in 2020. Photographs were consulted, and historic features were preserved, like the timber frame construction held together by carved pegs hewn on-site. The brass light fixtures with aluminum shades from 1949 were saved, refurbished, rehung.

Craftsmen and carpenters arrived, some whose parents or grandparents had worked on the parkway during its original construction. Now in her 90s, Miss Ellen herself came to the site to provide details of how the interior had looked during her half-century-plus of waitressing. And they achieved it all during a pandemic. On May 27, 2021, The Bluffs reopened, and the news was joyously heralded in the Watauga Democrat, the Wilkes Journal-Patriot, the National Parks Traveler website, and more.

The Blue Ridge Parkway Foundation sought new operators for The Bluffs, and found them in Sharon Pinney from Boone and Chef John Gamradt, who have 35 years of restaurant experience between them. A dedicated “people person,” Pinney lives with her dogs and two children in a 10-person tent in nearby Miller’s campground on the weekends. Truly. Her daughter can wave at her grandpa in Colorado every day via the webcam at The Bluffs’ entrance. Pinney can’t help but tear up as she relates the moments when patrons from years past cry with joy at rediscovering The Bluffs, and pose for pictures holding menus. 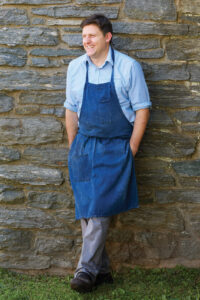 Like the parkway drive itself, the restaurant’s pace is leisurely, relaxed. From 8 a.m. to 8 p.m. between May and October (The Bluffs closes in the winter because “when it’s dark on the parkway, it’s really dark,” Pinney says), breakfast, lunch, and dinner are served. The basics are back, from the “sweet tater” pancakes, cathead biscuits, and berry cobbler to collards and the famous fried chicken, which, like a chocolate soufflé at a white-tablecloth establishment, takes 30 minutes to prepare. But it’s worth it: You’ll want to press your fingertips to the crumbs so as not to miss a speck of that golden perfection. The fried tomato BLT is slathered with pimento cheese that melts into the toasted organic sourdough slices for a soft, salty, crunchy delight.

Still, it’s 2021, so Chef John wanted “a bit of an uptick” in the menu, meaning that the shrimp and grits is served with shishito peppers, the fried okra comes with a cilantro-lime aioli, and a blackberry balsamic chicken salad is on offer. After an eight-mile hike — or even a two-miler — wanderers want a beer, and “end-to-enders,” as the folks who are covering all 469 miles of the parkway are called, deserve a glass of Chablis when they stop for the night. So, in a first for The Bluffs, wine and beer are available, too. One waitress, dressed these days in a T-shirt and cutoffs instead of the uniform of the past, has just finished a lesson in latte prep at the fancy espresso machine.

I can remember the precise color of the round, spinning, vinyl seats at the Rexall Drugs lunch counter in Rutherfordton. “How can you remember that?” my sister asks with astonishment. “How can you not?” I reply with equal astonishment. These are the kind of memories behind a groundswell of emotion that became a groundswell of hope, and then dollars, and then determination. While it has nothing to do with religion, the story of The Bluffs is a story of resolve and revival and resurrection. 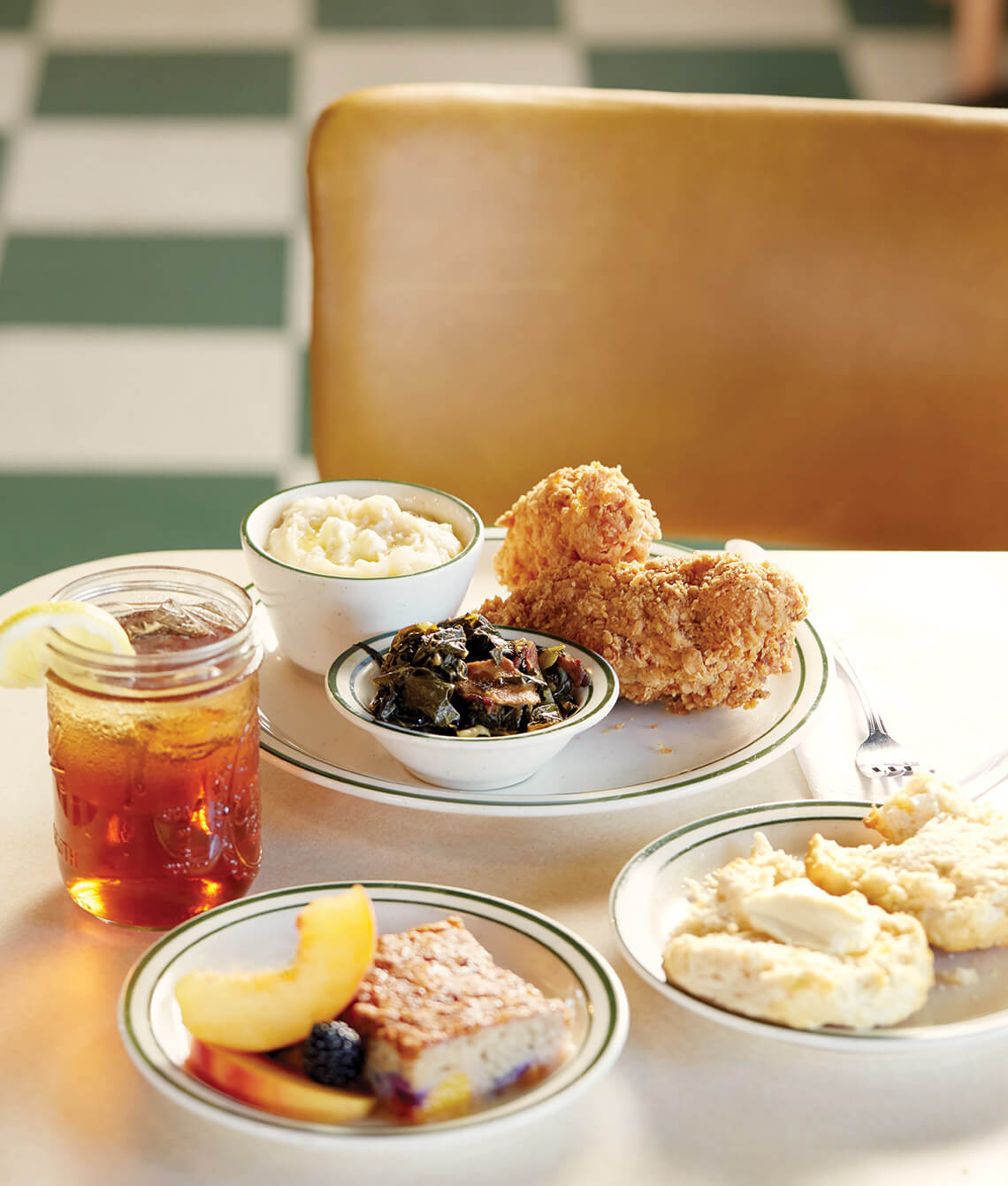 You know who owns The Bluffs? The same people who own the Blue Ridge Parkway. You, me, America’s citizenry. As a mere building, a wayfarer’s pull-off, there’s nothing magical about the humble simplicity of The Bluffs. Like the parkway itself, its beauty and significance lie in the simple fact that it is solid and true and unchanged and beloved. Loyal to its beginnings, as its customers are loyal to it. One of them has brought in a flat of milkweed seedlings to attract butterflies outside. The tray of spindly stems sits on the counter with the old-fashioned syrup dispensers and those salt-and-pepper shakers. If you should find a pair of ceramic motorcycle salt and peppers, take it to The Bluffs when you go. One’s putt-puttering into the parking lot now.

Do you have memories of The Bluffs and the Blue Ridge Parkway in the early days? We’d love to hear! Share your recollections at editorial@ourstate.com.