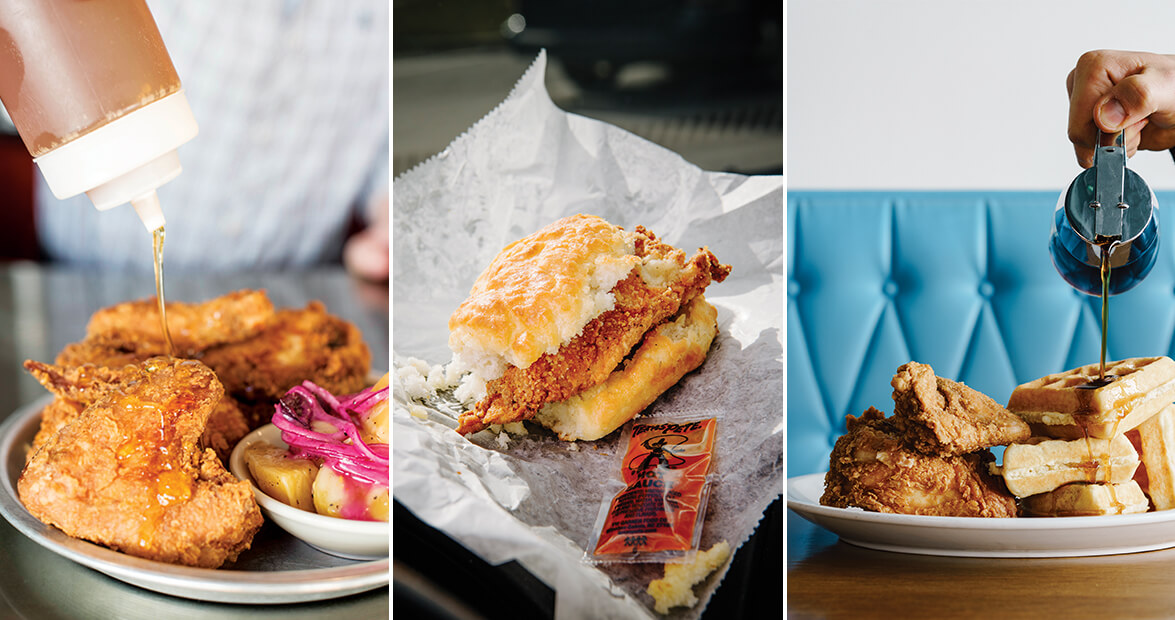 Might as well hang up the family skillet. There’s a great big world of fried chicken just waiting for you to take a bite: tucked inside biscuits in Asheville, drizzled with honey in Raleigh, served cold with summer corn in Belhaven. From chefs’ tables to take-out boxes, we ate our way across the state in search of the best places to satisfy that anytime, anywhere hankering for Southern fried perfection.

Now that chicken biscuits have been spied in NYC and LA, culinary trend-spotters think they’ve discovered something new. Bless their hearts. We’ve long known that one of the best ways to eat a piping hot fried chicken fillet is inside a biscuit so large we need to use both hands and more napkins than we can count.

Dallas Famous Chicken & Biscuits • Apex
The fried chicken for these biscuits comes from the same supply used for their plated meals, which means it’s a juicy piece that’s pulled from the bone just before it lands on the biscuit. Among the charms of this approach: You can get flavorful dark meat on a biscuit, a rare treat.
1101 East Williams Street, (919) 362-0051

Sunrise Biscuit Kitchen • Chapel Hill
The queue of cars awaiting a turn at the drive-through window can cause a traffic jam, especially on Tar Heel game days and alumni weekends. Fans note that the ratio of chicken to biscuit is pretty even, ensuring a bit of both in every bite. The biscuit, hash brown, and sweet tea combo is a popular order. But don’t forget a cinnamon roll made with biscuit dough to snack on later.
1305 East Franklin Street, (919) 933-1324 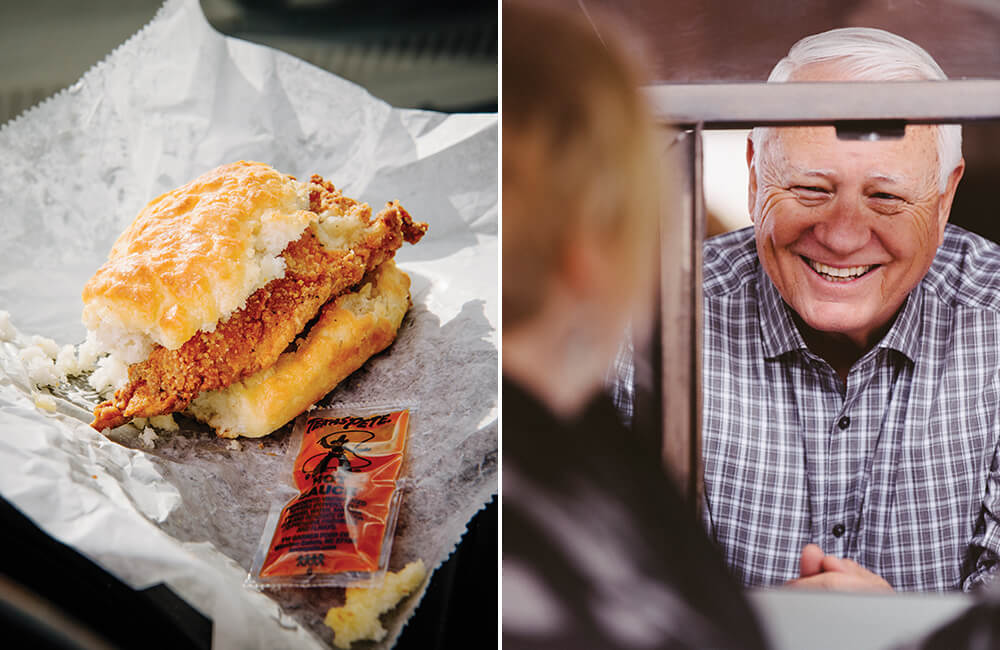 Time-Out • Chapel Hill
It’s hard to say whether they sell more chicken biscuits before or after dark, but late-night revelers find comfort and joy in these renowned chicken-Cheddar biscuits served 24 hours a day. Each huge square biscuit is filled with an equally huge piece of chicken; the crunchy batter pokes out from the edges as if chickens really did have fingers.
201 East Franklin Street, (919) 929-2425

Rise • Durham
Known for their doughnuts — and the line for those doughnuts — this North Carolina-based franchise also draws a crowd for its biscuits, in particular the fried buffalo chicken biscuit, which is a fried piece of chicken dipped in not-too-spicy sauce and garnished with buttermilk blue cheese and shaved celery.
8200 Renaissance Parkway, (919) 248-2992;
(Nine other locations, including Raleigh, Charlotte, Carrboro, Holly Springs, Morrisville, and Greensboro)

A cousin of the chicken biscuit and barbecue sandwich, yet appreciably different from both, a perfect handmade chicken sandwich is a prized offering. No uniform fast-food versions here.

Buxton Hall • Asheville
Pimento and American cheeses, pickles, and creamy white barbecue sauce adorn this buttermilk fried chicken sandwich. Buxton’s take is as clever as it is tasty: White barbecue sauce, which is intended to accompany chicken instead of pig, hails from northern Alabama and is an anomaly in North Carolina.
32 Banks Avenue, (828) 232-7216 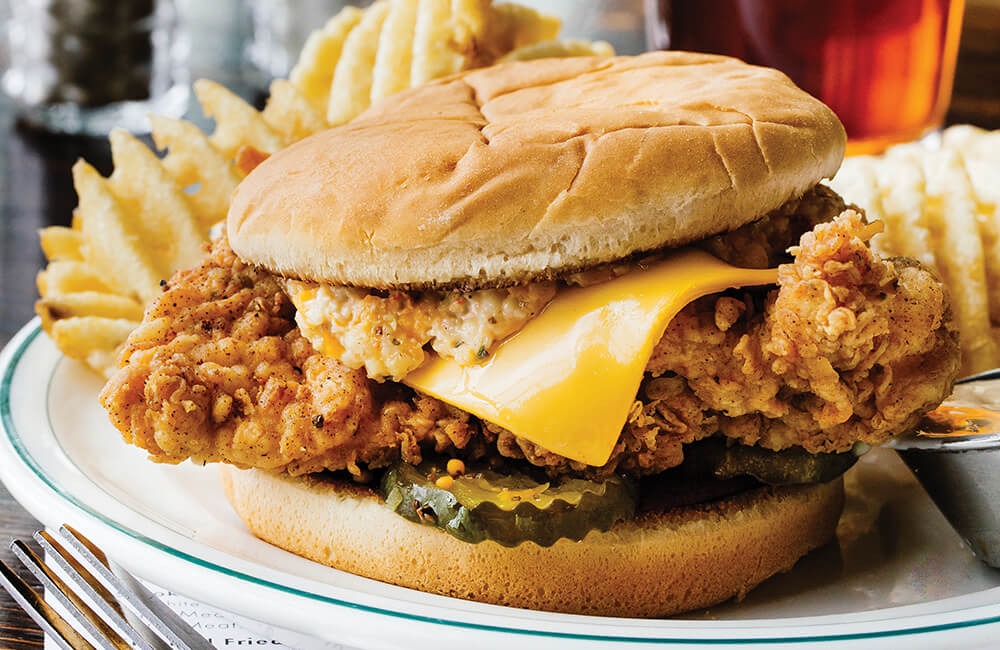 M Kokko • Durham
In a compact space tucked almost out of sight in downtown Durham, something exciting is happening in the world of fried chicken sandwiches: Korean-style. This KFC (short for Korean Fried Chicken, of course) has a distinctive crust — substantial, yet light, eggshell-thin, and crisp — and is served on a soft bun with a light garlic-based aioli and pickles.
311 Holland Street B, (919) 908-9332

Sometimes it really is the destination, not the trip, that matters. A drive to these legendary places for a fried chicken dinner feels like a pilgrimage.

Mama Dip’s • Chapel Hill
Decades before celebrity chefs became household names, Mildred Council, a k a Mama Dip, was known by almost every student who passed through UNC and craved the comfort of home-cooked soul food. Fried chicken has been a fixture on Council’s menu since her restaurant opened in 1976, and it earns a spot on many national lists of the best fried chicken. Mama Dip’s has a bustling take-out business, but the chicken never tastes better than when enjoyed at the restaurant.
408 West Rosemary Street, (919) 942-5837

The Derby Restaurant • Mount Airy
Designed to resemble a derby hat, this round building has served as a hometown institution for folks in and around Mount Airy since 1937, but it’s a destination for travelers seeking a home-cooked meal, too. Now under the watch of a third generation, this family-owned business offers fair warning that their weekday fried chicken requires a 20-minute wait, which is a sure sign that someone is cooking chicken to order. The same deliciously crispy bird is available as a Sunday special, as well.
1901 South Main Street, (336) 786-7082

Some eaters are content to let a fine chicken dinner linger only in their memories. Others prefer to feel the burn for days. Shockingly spicy fried chicken has developed a cult following in the past few years. These firebirds are so closely associated with a certain Music City that some people refer to this type of chicken as Nashville hot chicken. However, North Carolina has a say in these matters, too.

Rocky’s Hot Chicken Shack • Asheville
They refer to their diners as “heat seekers,” and their sliding scale of spiciness starts at zero and peaks at XX-Hot, or “Mount St. Hell No!” Even though their hottest version has been described as “face-melting,” all of their chicken begins as a classic version and escalates from there. Plain or hot, it’s often called addictive.
1455 Patton Avenue,
(828) 575-2260; Arden location, (828) 676-3222

Beasley’s Chicken + Honey • Raleigh
This downtown eatery is known for their fried chicken that comes on plates, biscuits, and waffles — all topped with a drizzle of honey, a tribute to chef and owner Ashley Christensen’s beekeeping dad. To spice things up, order the Hot Chicken sandwich — fried chicken piled high with Carolina Reaper hot chili oil, pickles, and buttermilk-herb dressing.
237 South Wilmington Street, (919) 322-0127

It’s been said that the best reason to fry chicken is so that you can eat it cold the next day — ideally on a picnic or standing in front of an open fridge on a hot summer night. Cold fried chicken is considerably different from hot: The crust becomes more bread-like and the meat firmer and more toothsome. While there’s room for both kinds in this world, only a few restaurants put chilled chicken in the spotlight.

Spoon River Artworks and Market • Belhaven
Only steps away from the Pungo River, this artfully decorated restaurant on the Inner Banks draws visitors by land and by water, including boaters en route along the Eastern Seaboard and those who float over from neighboring counties on Pamlico Sound. Come summer, the chef sometimes offers a plate of cold fried chicken served with local sweet corn
and herb compound butter.
263 Pamlico Street, (252) 945-3899

No one can say for sure who first served fried chicken and waffles, but the combo took off during the Harlem Renaissance, when jazz musicians and revelers needed either a very late dinner or a very early breakfast after a show. Over time the dish migrated south and became a North Carolina classic.

King Daddy’s Chicken and Waffle • Asheville
Fried chicken comes “regular” or “heirloom” (a more flavorful breed of bird), and is cooked to order in an iron skillet, requiring a 30-minute wait. Choices abound: There are a half dozen other versions of chicken on the menu, from wings to livers to pulled chicken bathed in white gravy. Five types of waffles are served with sorghum or maple syrup. And something you don’t often see: gluten-free options for both the chicken and the waffle.
444 Haywood Road, No. 101, (828) 785-1690 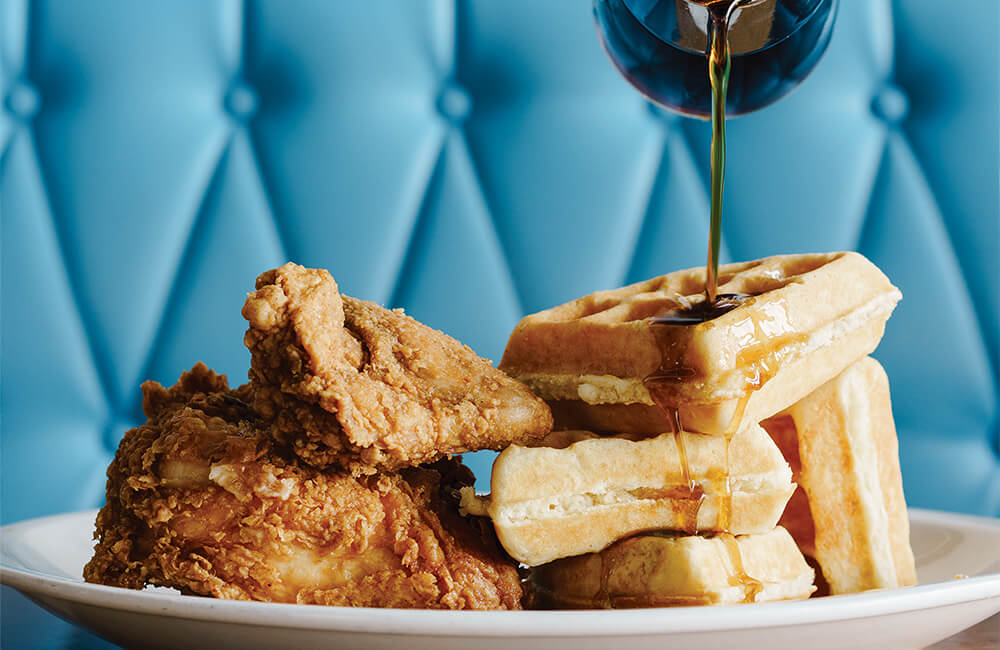 A sweet-and-savory pair: King Daddy’s, a West Asheville hotspot, is the latest venture from the chef and owner of nearby Early Girl Eatery. photograph by Johnny Autry

Vidalia Restaurant & Wine Bar • Boone
The chicken and waffles here are fancier than most: The chicken is battered, the waffles are sweet potato, the gravy is sawmill, and the crowning touch is a side of cane syrup infused with North Carolina’s own Defiant single malt whiskey, made a couple of hours away in Bostic.
831 West King Street, (828) 263-9176

Places that serve family-style — heaping platters of fried chicken and bowls of sides passed around the table — feel like a dinner at Grandma’s.

Rhubarb • Asheville
On the first Sunday of each month, lauded Southern chef John Fleer serves an old-fashioned but updated three-course Sunday supper. Chicken brined in sweet tea — a much-copied technique invented by Fleer — is often given a tangy accompaniment: bread-and-butter pickles or sweet-and-sour collards. Innovation is always on the menu.
7 South Pack Square, (828) 785-1503

Dan’l Boone Inn • Boone
Located in one of Boone’s oldest buildings, this High Country standby has been serving three squares for 58 years. Guests queue up for the fixed-price menu that includes fried chicken plus at least two other meats, multiple sides, biscuits, a dessert, and a beverage. It’s like having an all-you-can-eat buffet brought to your table.
130 Hardin Street, (828) 264-8657 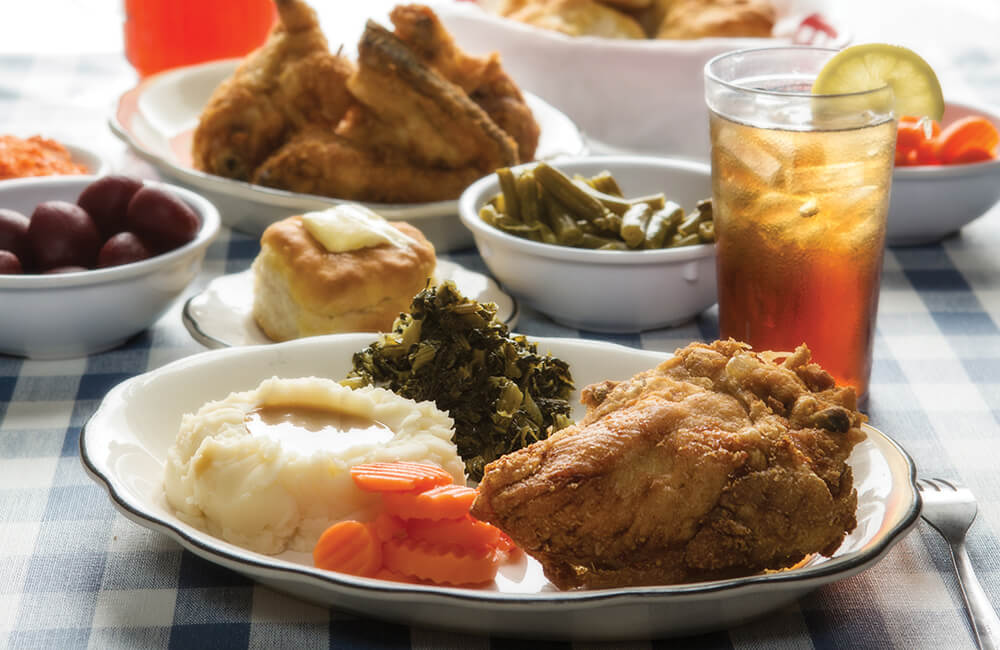 Julia’s Talley House • Troutman
Step onto the porch of this gray clapboard house, and you’re home for dinner. There’s always fried chicken to pass around family-style or in the cafeteria-style buffet line.
305 North Main Street, (704) 528-6962

This fried chicken may be spiffed up by pedigreed chefs, but beneath the frills is an honest bird with amazing fixin’s.

Acme • Carrboro
Chef and owner Kevin Callaghan draws inspiration from the seasonal rhythms and flavors of the Piedmont to create riffs on Southern dishes. The crust on his fried chicken is full of finely chopped pecans and is served with mushroom gravy and traditional sides, such as butter beans and mashed potatoes with dinner, and rice with brunch.
110 East Main Street, (919) 929-2263 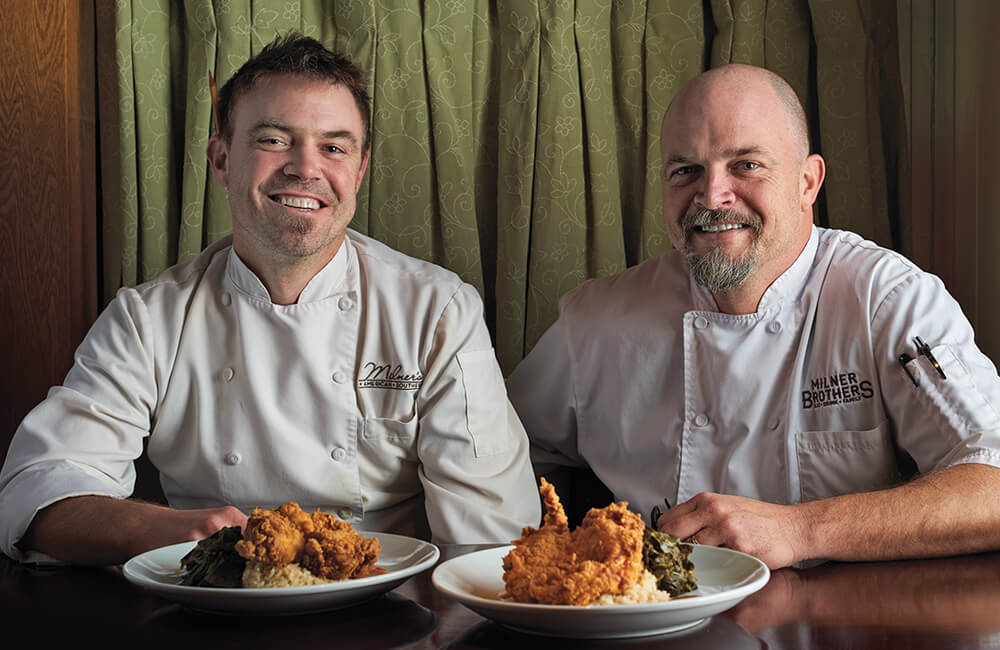 Milner’s American Southern Cuisine and Cocktails • Winston-Salem
The food at Milner’s has a Low Country point of view, a nod to both brothers’ time spent cooking on the Charleston peninsula. Chefs and co-owners John and Buddy Milner have garnered a following for their buttermilk fried chicken served with Carolina Gold rice, collard greens, and tomato gravy.
630 South Stratford Road, (336) 768-2221

Traditional is in the eye — and taste buds — of the beholder. Flour dredge and a skillet, or batter and a deep fryer? People will mutter under their breath and air grievances over such things, but few would argue that the best fried chicken, no matter the style, is the kind that most closely resembles their grandmother’s, or the first bite that made them think, Ah, yes.

Magnolia 23 • Asheboro
The chicken is pan-fried, and the down-home sides are made from family recipes, such as stewed potatoes and crowder peas. It’s the type of small-town place where the original owner walks around to say hello and check on things, even though he’s now retired and has turned over the keys to his daughters.
23 South Fayetteville Street, (336) 672-2300 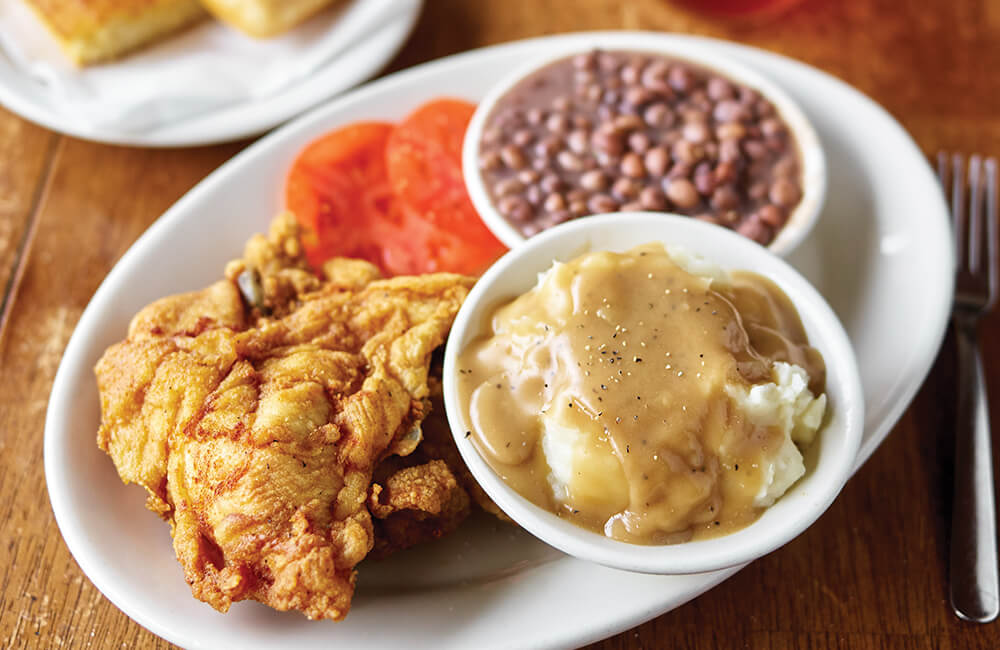 Fried chicken isn’t picky about its companions. Any of the sides from the Magnolia 23 roster will do just fine. photograph by Joey Seawell

South 21 • Charlotte
This old-fashioned drive-in with curb service dates back to 1955. It’s perhaps better known for burgers, but insiders know never to overlook their golden fried chicken. Guests can eat in their cars, although the staff reminds folks that they’ll box up take-home orders.
3101 East Independence Boulevard, (704) 377-4509

Lucky 32 • Greensboro
This restaurant was among the first to call itself farm-to-table with an emphasis on local ingredients. Both locations have skillet-fried chicken specials — a breast, leg, and wing fried in rendered lard, served with mashed potatoes, giblet gravy, collard greens, and cornbread for sopping — available Wednesdays in Cary and Sundays in Greensboro.
1421 Westover Terrace, (336) 370-0707;
Cary location, (919) 233-1632

Mountain Fried Chicken • Winston-Salem
Mountain Fried claims to know the secret to fried chicken that “isn’t greasy.” They’ll even let you in on the secret: a pressure cooker. Here, chicken comes by the piece or as part of a plated meal, which includes two of 14 different side dishes. Take out, eat in, or get dinner delivered.
5954 University Parkway, (336) 767-1676;
507 Akron Drive, (336) 767-1675;
Locations in Clemmons and Hickory