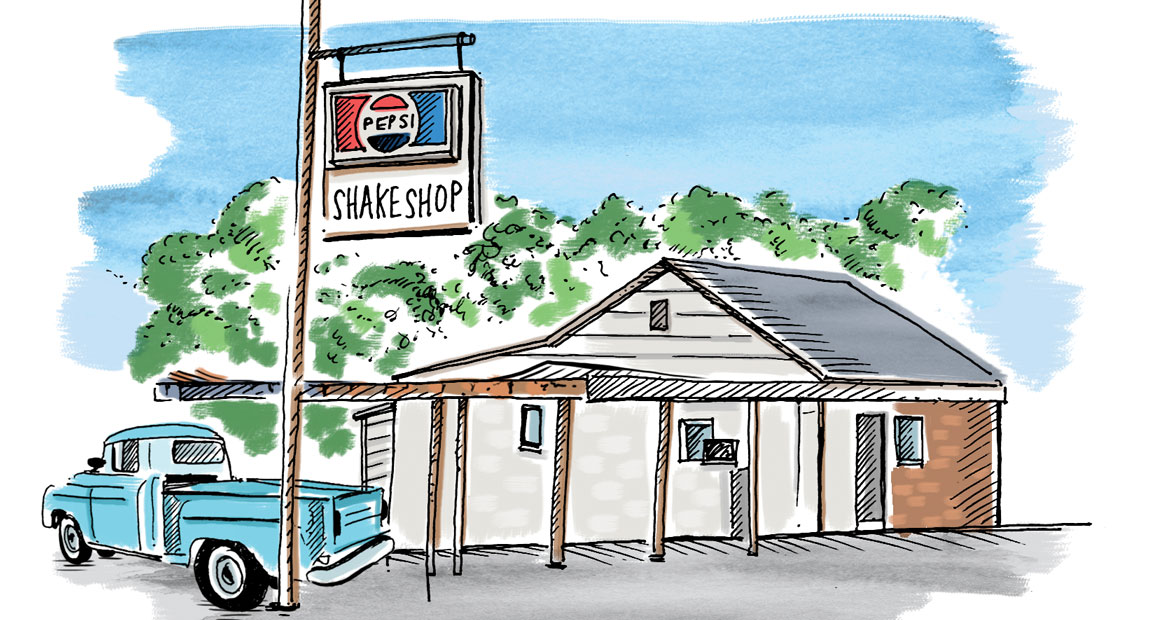 Slow down as you drive along Church Street, because you might think the building that’s home to the Shake Shop is abandoned, what with the wavy, corrugated metal roof — low enough to touch if you’re sitting on a car hood — flaking rust chips and all. Plus, on the Pepsi-logoed sign, “Shake Shop” is painted in a font that’s no longer in style, one best described as “Jaunty ’50s.” Then there’s the window AC unit propped up with a wooden pole. But hanging over the pitted, pebbly parking lot is the aroma of fryer and grill, an instantly familiar scent that makes you instantly hungry.

“It was 50 years last year,” owner Kyle Jarrett says, that his father, George, known to everyone as Duck, purchased the Shake Shop from his partner. The Peeler family of Cherryville originally built the grill in 1943. But Jarrett’s family has been in the burger biz since 1936, when his grandparents ran the Wayside Inn, another Cherryville dive in this textile town that’s storied for its one-time grills.

When textile mills and Carolina Freight employed hundreds, first and second shifts meant hungry folks were coming into the Shake Shop  all day, calling in orders for 60 or 70 sandwiches at 7 in the morning. The mills are gone now, and Jarrett, 55, opens for lunch, closes for two hours, and then opens again for supper at 4:30. Shakes were phased out when fast-food franchises arrived in town.

What does the Shake Shop serve, then? A lotta burgers. Literally. The laminated, single-sided menu touts the Lottaburger. Lottafish, too. “Lotta” means a style unique to the Shake Shop, and to Cherryville: slaw, tomato, and pickle. The origins of the Lottaburger name are in some dispute, but there’s no question about what it is: two burgers cooked on a flattop grill and served inside a hoagie-type bun. With slaw, tomato, and pickle. Only. “People will say, ‘I don’t eat slaw,’ ” Jarrett says, but, “my grandfather started that in the ’30s. When I was a kid, people came up here to get a burger, and you got it the way they fixed it, and if you didn’t like it, you took it off yourself.” 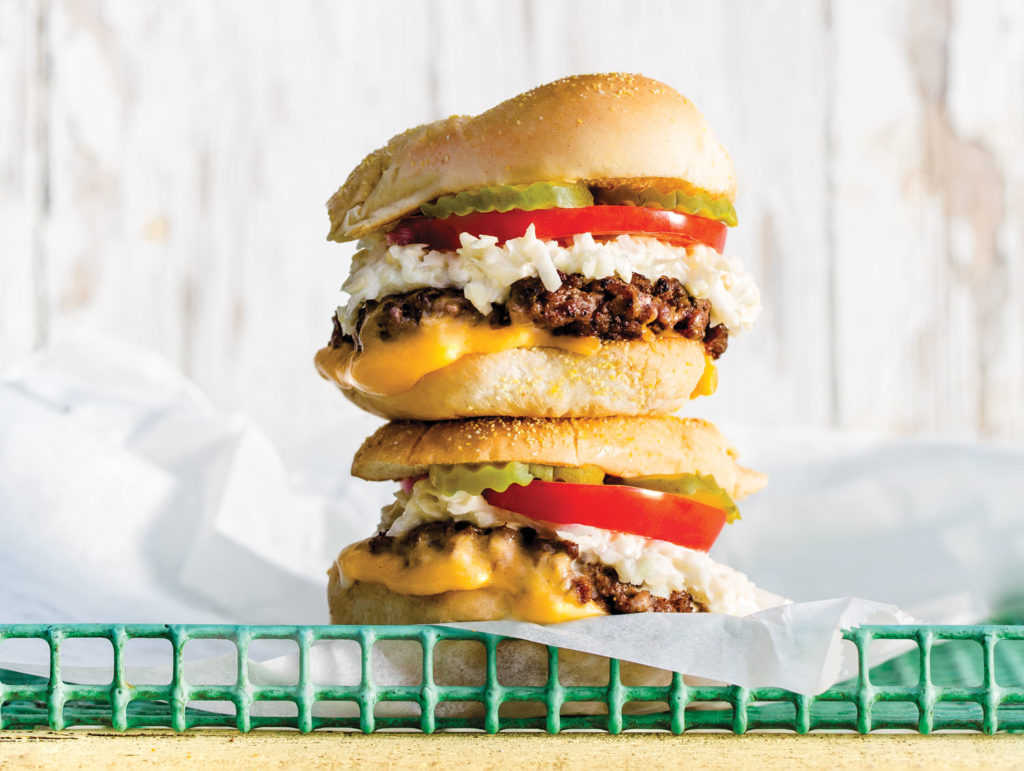 The Shake Shop’s signature meal, a Lottaburger, is stacked with slaw, tomato, and pickle. photograph by Tim Robison

Don’t take it off. The combination of pickle and tomato, mayonnaise-y shredded cabbage, and loosely packed meat on a squishy — rather than crusty — bun means that the result is soft, with a comforting combo of slight slaw chill and juicy hot beef.

Nobody will tell you that you can’t add ketchup to your burger, but a handwritten sign on the wall reads, No special orders on FF or OR. FF I can figure, but OR? “Onion rings,” replies Stacy, one of a trio of busy waitresses. All three wear black Shake Shop T-shirts, pull back their blond hair in banana clips, and add “darlin’ ” and “sweetheart” to every sentence they utter. One works entirely for free; she just likes hanging around the people.

Presumably, the customers calling at noon to place take-out orders for their suppers hours from now aren’t making special requests.

Customers stand 12 deep waiting for their food, or sit in one of the five booths with Formica-topped tables, or on a counter stool. They pay at the glass-fronted counter, and they pay cash only. Because of bounced checks? Yes, says Jarrett, but for a kindhearted reason: “If someone’s check bounces, they’re embarrassed to come back, and I can’t stand that.” Along the same lines, a toasted cheese sandwich is still on the menu. In the past, patrons who couldn’t afford hamburgers got bologna sandwiches. And patrons who couldn’t afford bologna ordered toasted cheese sandwiches, in which a slice of cheese is laid right on the grill and fried no differently than a hamburger patty. The cheese is topped — also right on the grill — with the bottom half of a bun, so the bread gets good and grilled, greasy and cheesy. 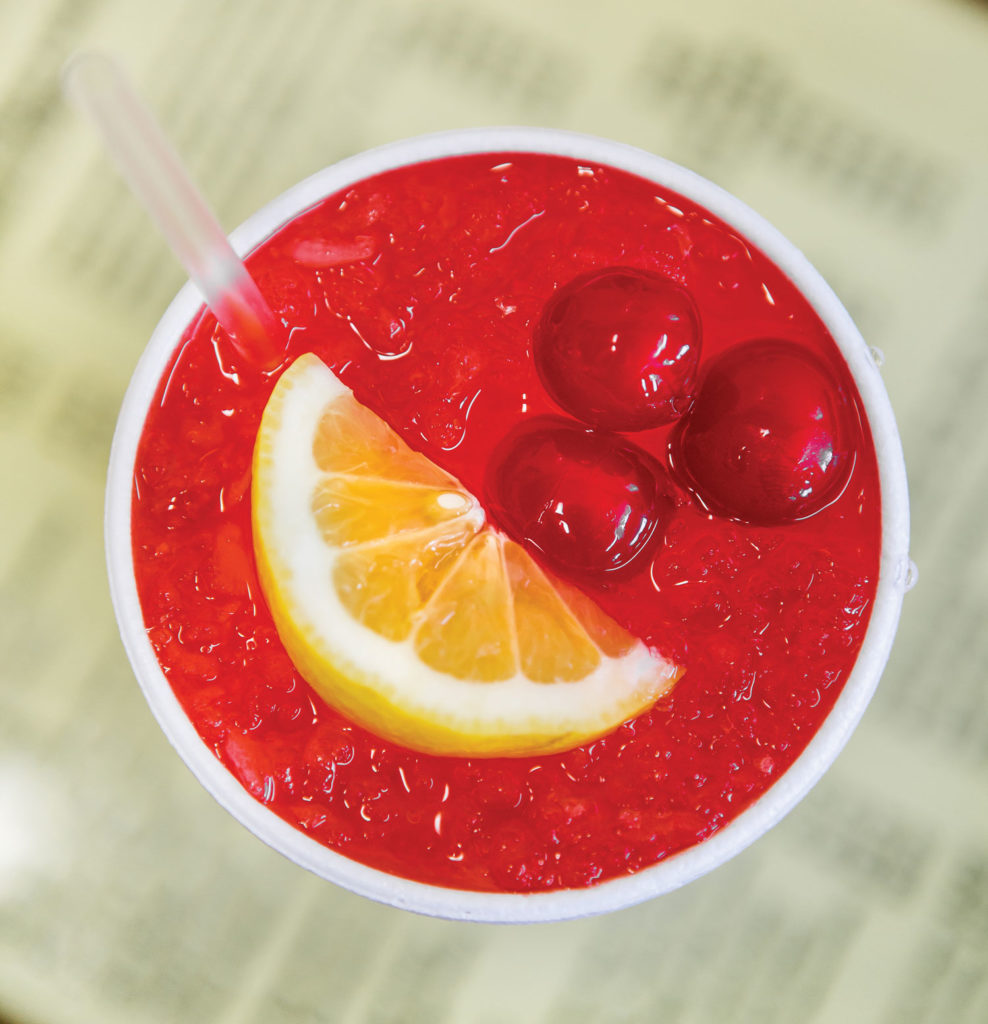 What to drink with your burger: a Cherry Lemon SunDrop. photograph by Tim Robison

The window unit hums like a generator. A newspaper sits on the counter for anyone eating alone. The TV sports rabbit-ear antennas, and the customers sport tattoos and high heels, baseball caps and business suits. A waitress delivers a Cherry Lemon SunDrop, a drink whose hue appears nowhere in nature and whose ingredients, naturally (or not), are SunDrop, cherry juice, candied cherries, lemon slices, and lemon juice. “Y’all be good,” she calls to a customer leaving with his bag of burgers. “They don’t know how,” another waitress retorts.

“I’m blessed,” Jarrett says of his customers. And the Shake Shop? It’s not just a burger joint to him. “It’s your life,” he says.