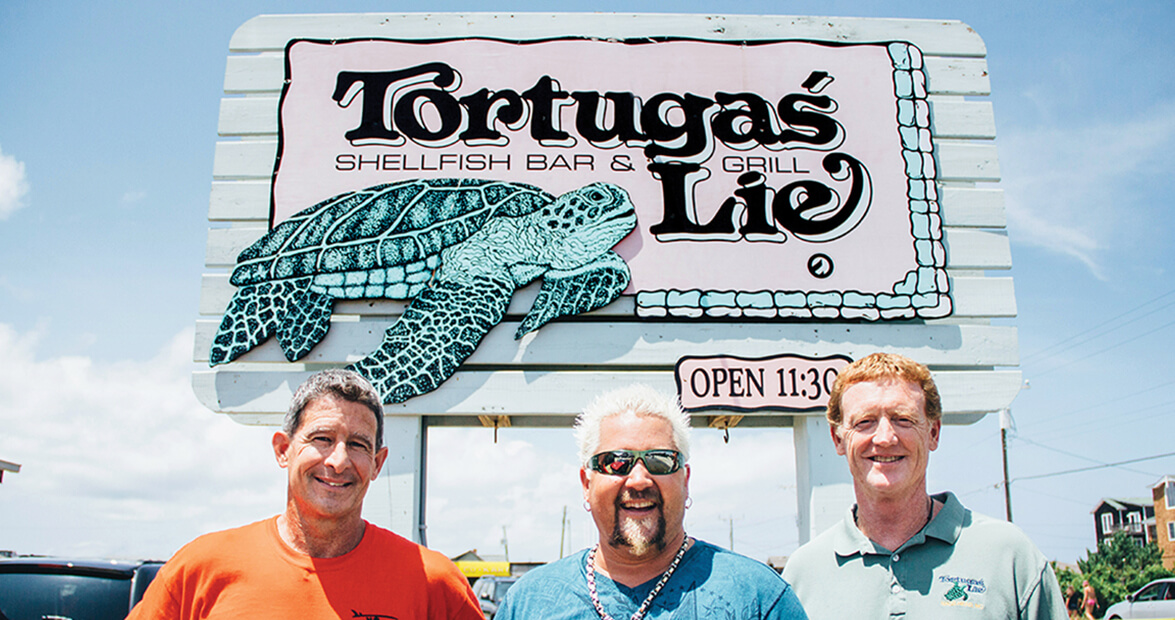 When you see Guy Fieri, you notice him, even if you don’t know who he is.

Rob Crenshaw, chef and owner of Cabo Fish Taco in Charlotte, sorta knew. “I think I recognized that guy’s face from TGI Friday’s or something,” he says.

Fieri, if you don’t know, is the spiky-haired, Flavortown!-shouting, red Camaro-driving, bold flavor-seeking host of Diners, Drive-Ins and Dives, now in its 10th year on Food Network. He is one of the least subtle beings you will ever encounter. Hence, in an era when people’s first reaction online is to ridicule, Fieri’s a lightning rod. Meet him, though, and your opinion changes. “Other than the car and the outfit situation, he’s not a celebrity,” Crenshaw says. Fieri is down to earth. He jokes with the kitchen guys. And he knows his way around: Knives. Refrigeration. Prep. Kitchen flow. “He’s not a prop,” Crenshaw says. 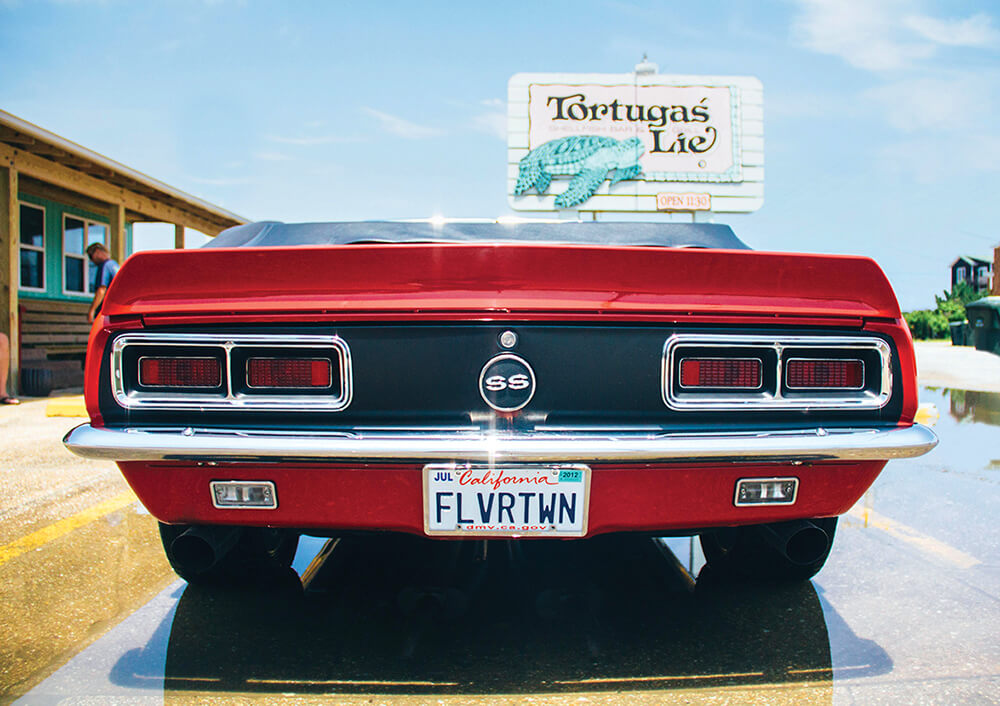 Fieri is also an avid collector of American cars. photograph by Daniel Barlow

And for a man who practically glows in the dark, Fieri is a surprisingly effective wingman in the kitchen. On the show, he takes a supporting role as sous chef. When Fieri visited Cabo Fish Taco, he made the preparation of the barbecue mahi tacos easy for the audience to understand, while also giving credit to Crenshaw’s culinary skills.

As cooked red peppers go into a blender: “You roasted those yourself?”

“Who came up with this recipe?” Fieri asks.

At the end, Fieri takes a dramatic bite. “The slaw by itself has huge flavor,” he says. “The white sauce: huuuuge flavor.”

Roll your eyes if you want. The ratings don’t lie. Diners, Drive-Ins and Dives, or “Triple D,” as it’s known, has long been one of Food Network’s most successful shows, and does for small, mom-and-pop joints what an invite to Johnny Carson’s couch once did for comedians. Over its run, the show has featured more than 800 restaurants, including more than two dozen in this state, with more North Carolina episodes in the works. Episodes are rerun on Food Network for years, with each broadcast bringing a spike in sales for the featured eatery.

At South 21 Drive-In in Charlotte, they sell more onion rings every time their episode airs. At the Outer Banks Brewing Station, they’ll get an uptick in business in the normally dead 3 p.m. hour. At Tortugas’ Lie in Nags Head, which is already busy during the summer, they notice swarms of people during the off-season whenever their episode is on. For each of these places, it’s been at least four years since their episode premiered. And it’s still paying off. Brewing Station co-owner Karen Loopman-Davis puts the show’s business bump into tangible terms: “It was my kid’s college fund.”

Not bad for someone who had never heard of Diners, Drive-Ins and Dives when its producers first called her. “My husband and I don’t have TV,” Loopman-Davis says. “We had to look up what it was.” 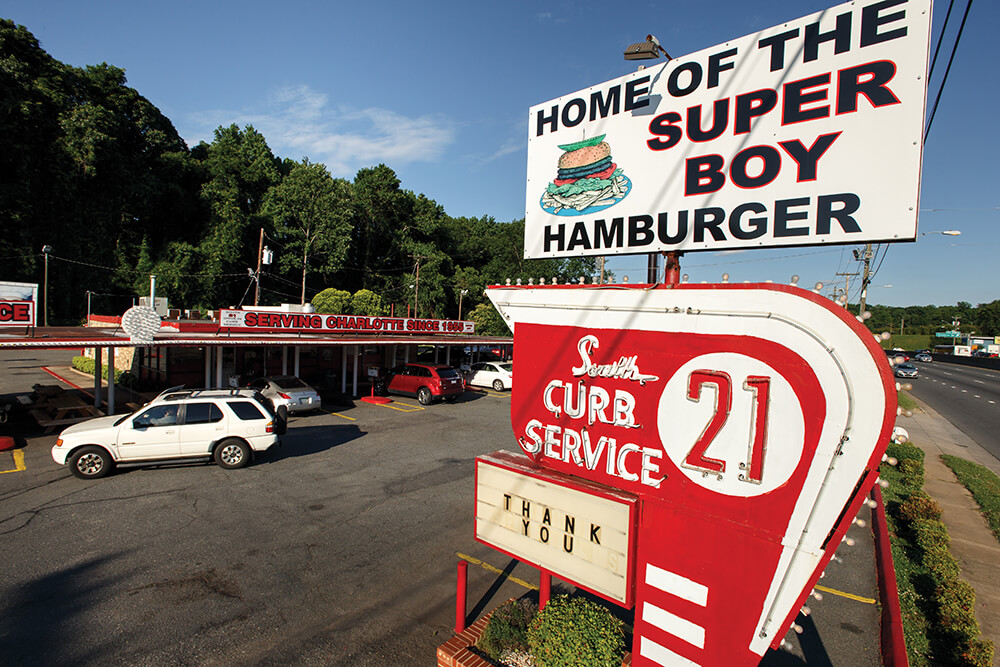 Before filming, Every restaurant goes through several phone interviews, some as long as three hours. The producers want to make sure the food isn’t canned, frozen, or premade; good health inspections are crucial. “They wanted you to be totally legit,” Crenshaw says. “They can talk to you and figure out if you’re in it for the money.”

Producers convince wary restaurateurs that shutting down for the better part of two or three days will pay off handsomely months down the line. The show, not the chef, picks the dish that’ll be featured on TV. Food is made for a second time. Or a third. While filming, employees have to wear the same clothes for several days so that the shots are consistent. Seasonal decorations come down. When Fieri arrives, he usually spends a few hours, at minimum, at each restaurant, shooting scenes with the cooks, and talking with hand-picked family members and customers who serve as extras. He’ll sometimes shoot scenes at three or four local restaurants in one day, signing autographs along the way. “He’s just goin’,” says Bob Sanders, co-owner of Tortugas’ Lie.

“He doesn’t eat as much as it looks like he ate,” says Maria Housiadas of South 21 Drive-In.

“He ate everything,” Crenshaw says.

Months after filming, the show airs, and the restaurant gets mobbed by new customers. Most of them order the dish that Fieri ate, regardless of whether it’s a dish that the restaurant’s known for. At Tortugas’ Lie, a place beloved for seafood, Fieri ate the jerk chicken. “I’m glad they picked it,” Sanders says. “It’s overlooked.” At South 21, Fieri requested the Super Boy burger, but asked for it Carolina style, with slaw, mustard, and onions. That version isn’t on the menu, and still isn’t. Housiadas can spot out-of-towners and doesn’t wait for them to order. Instead, she just asks them up front: Do you want it like it was on the show? The Brewing Station added the shrimp and grits that Fieri ate to their lunch menu because people started demanding it all day, even though it had been only on the dinner menu. “We had to add it,” Loopman-Davis says.

Of course, some places say no when Triple D calls them. They just don’t want to throw off a delicate balance of profit and word-of-mouth popularity. And other places fall victim to the same problems that befall, say, lottery winners. In 2007, The Penguin Drive-In in Charlotte became the first restaurant in North Carolina to be featured on Triple D, but the ensuing fame and crush of customers exposed a rift between the managers who ran it and the family who owned it. After an uproar, the managers left in 2010 and the place closed for good in 2015.

Those problems are outliers, though, because the show itself is rooting for the places it features to succeed. It makes economic sense. Triple D’s true value comes not from new episodes, but from reruns. If a joint closes, that’s one episode that can’t re-air and make more money.

In that way, Triple D and the places it features are more similar than they may realize. The key to the show, and to your favorite diner, local bar, or greasy spoon, is repetition. Sure, you might remember the best meal you’ve ever had, or the best steak you’ve ever eaten, or the most elegant ambience you’ve ever experienced. But diners, drive-ins, and dives aren’t meant to be tried once and forgotten. They’re meant to be visited again and again. Their food is comfort food. Their customers are loyal regulars.

And when Fieri eats that food, word gets out. Quickly. While the show was filming at Tortugas’ Lie, a friend of Sanders saw Fieri walking on the beach. He was hard to miss, but easy to approach. “You going back up to Tortugas’ to eat?” the friend asked. Fieri’s response was playful: “Hell, I can’t get in that damn place!”

No wonder. Earlier that day, Fieri had taken a big bite of the “Pork Antonio,” a North Carolina chop with a Jamaican twist. With his mouth still full, Fieri couldn’t resist the praise: “That’s like big-restaurant good.”