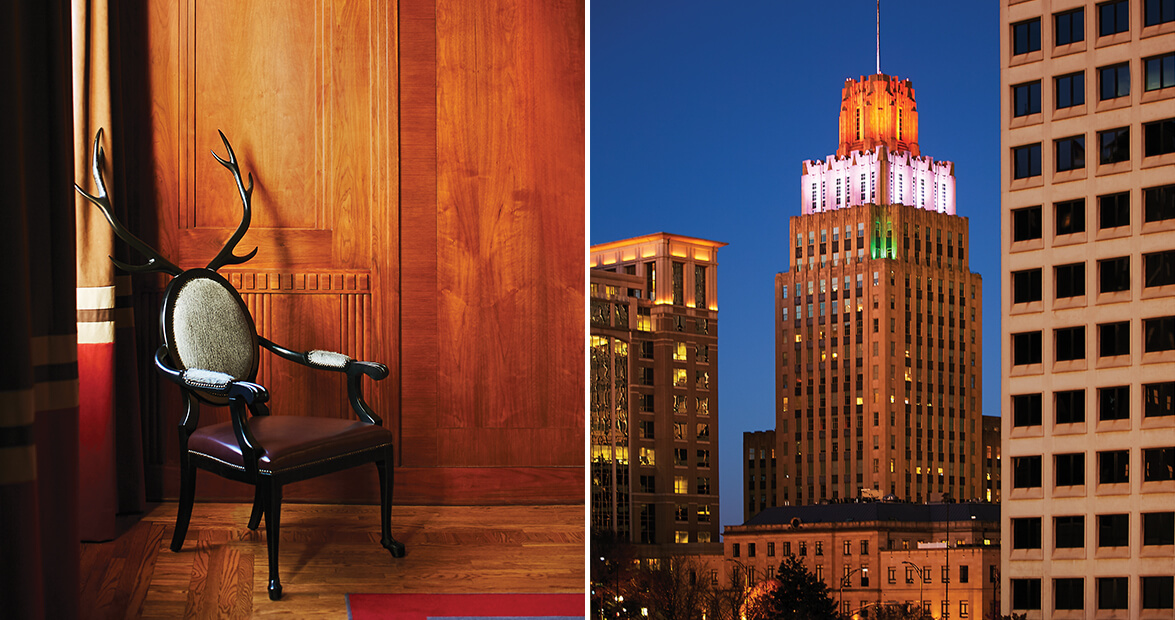 Fifty people were invited to the grand opening of a new hotel in Winston-Salem in 2016. Two hundred showed up, most just wanting a look inside. One of them was Dr. Lou Gottlieb, who, decades before, had his ophthalmology office on the 12th floor of the high-rise. Back then, a patient coming in for a new set of glasses would sometimes push the wrong button in the elevator and be spit out into the office of the chairman of the R.J. Reynolds Tobacco Company.

The Reynolds Building, now home to The Cardinal Hotel, was once the company’s headquarters. It’s an Art Deco palace of Indiana limestone, polished brass, and corporate intrigue. No expense was spared. One year, the company tore up the sidewalk and installed heating coils underneath because a snowstorm had made the concrete slick. The building had its own small army of plumbers, carpenters, and electricians, as well as a tight security force. After Dr. Gottlieb noticed a pair of glasses missing from a display case, the company posted a guard in his office 24 hours a day for a month. They nabbed the thief: a repairman who’d pocketed some specs during his monthly after-hours visit.

In 2014, RJR sold the building to PMC Property Group, which started converting upper floors into 120 luxury apartments. Kimpton, which operates 62 boutique hotels nationwide, made lodging out of the lower six stories. Winston-Salem was then the smallest city in which Kimpton operated, and they weren’t entirely sure what to expect. They knew they’d get business from Reynolds American (RJR’s parent company), whose headquarters are in the tower across the plaza. People would stay there for Wake Forest University football games and commencement ceremonies. And they’d get travelers to the High Point Market. But when The Cardinal officially opened last April, the first month quickly sold out. Some surprising guests had booked rooms: locals. 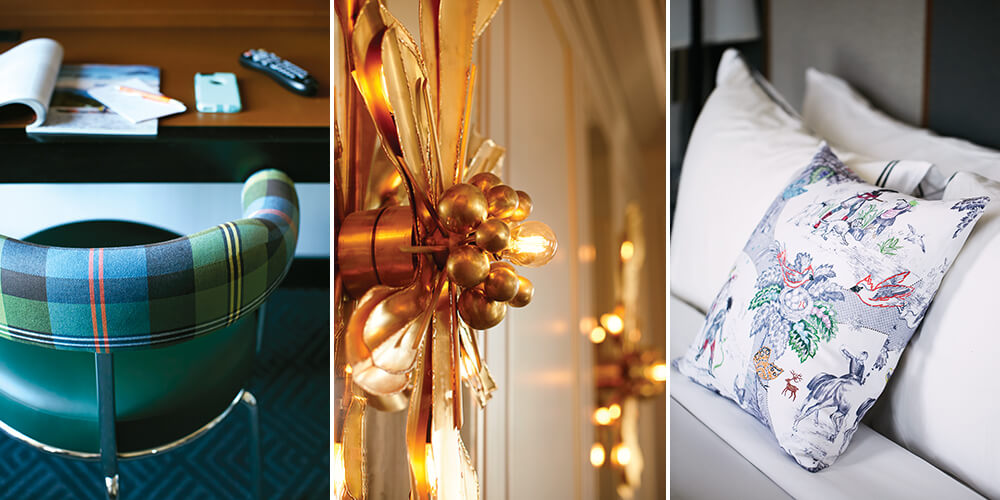 At The Cardinal there are North Carolina touches hidden in plain sight, including the state bird and other symbols on pillows, Carolina Tartan on chairs, and magnolia-inspired light fixtures. photograph by Stacey Van Berkel

Locals like Marty Haynes and his wife, Karen, who live only eight miles away. Curious to see what had become of Marty’s former office on the fourth floor, they stayed at the hotel to celebrate their 30th wedding anniversary. The first thing Marty did when he entered the lobby was look up. The brass tobacco leaves that ran across the ceiling, between the brass elevator doors, were still there. (“They didn’t do a thing to it,” he says, proudly.) So was the gray marble. The hotel rooms above were modern, but the lobby was still distinctly Reynolds.

The building became a fortress. You could see it from anywhere in town, except from the inside.

R.J. Reynolds died in 1918. But it would take another 41 years before the portrait of another chief executive was hung next to his in the boardroom. That gesture speaks to the enduring power of the man who transformed sleepy Winston-Salem into a company town. Railroad cars brought in tobacco. Factories and smokestacks rose. The Camel cigarette was born. As the company steadily grew, swallowing up acre after acre and covering them in bricks and glass, Reynolds made his design preference known: All company buildings, including offices, should look the same.

Bowman Gray Sr., who eventually became the company’s chief executive, did not share that philosophy. In 1927, he wanted a new headquarters. The building was to have, according to the architect, “an effect of conservatism along with attractiveness, [avoiding] flashiness.” The end result: a 22-story limestone ziggurat with more than a thousand windows. Construction crews tore down what had been Winston-Salem’s town hall, and what went up in its place took shape with astonishing speed. Eleven months after the first piece of steel was placed, the Reynolds Building opened in April 1929 — six months before the stock market crashed. The ensuing Great Depression seemed to have surprisingly little effect on leases. 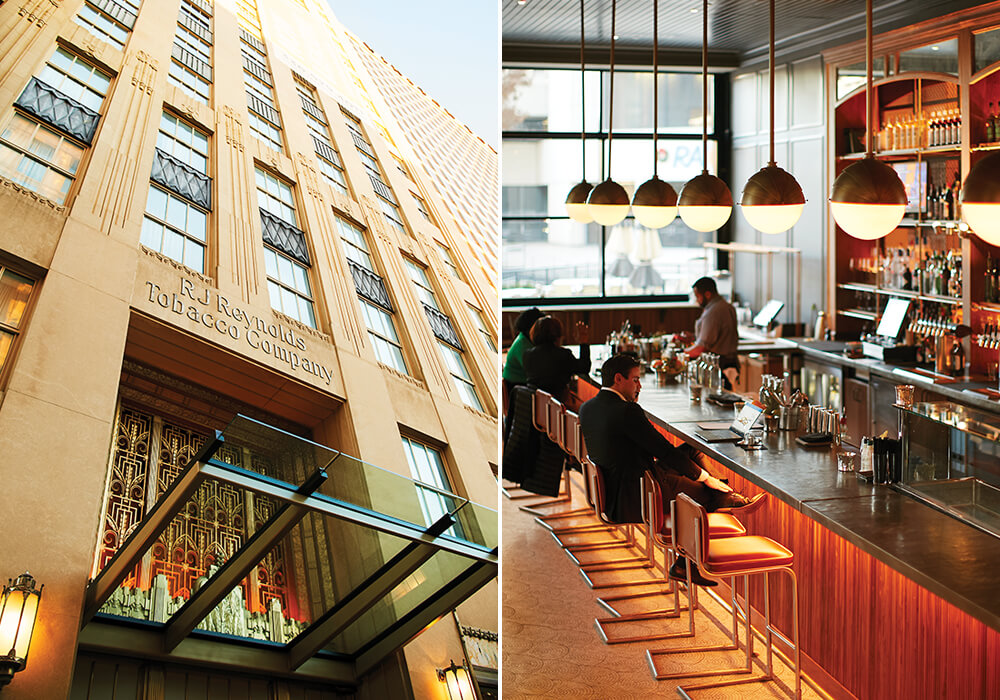 The elegant Katharine Brasserie and Bar, named for the wife of R.J. Reynolds, features a raw bar and French fare with a Southern twist. photograph by Stacey Van Berkel

Long before that, though, the building was seen as a metaphor. “It stands as a symbol of stability, an impressive monument indicative of the whole industry’s progress,” reads one account from 1931. The New York architecture firm that designed it used it as inspiration for the Empire State Building, and on the Reynolds Building’s 50th birthday, the New York doppelgänger mailed a card to its Winston-Salem counterpart that said, “Happy Anniversary, Dad.”

At first, RJR only occupied a handful of floors, including the ones at the top, while the rest were home to banks, barbers, brokers, doctors, and dentists. But slowly and steadily, the company grew bigger and more cloistered, and eventually it took over the rest of the space.

One of the last outside tenants, a 93-year-old architect who’d moved into the building in 1929, moved out in 1982, just as the turmoil surrounding tobacco companies started to crescendo. Soon, it became impossible to get on an elevator in the Reynolds Building without going through tight security. 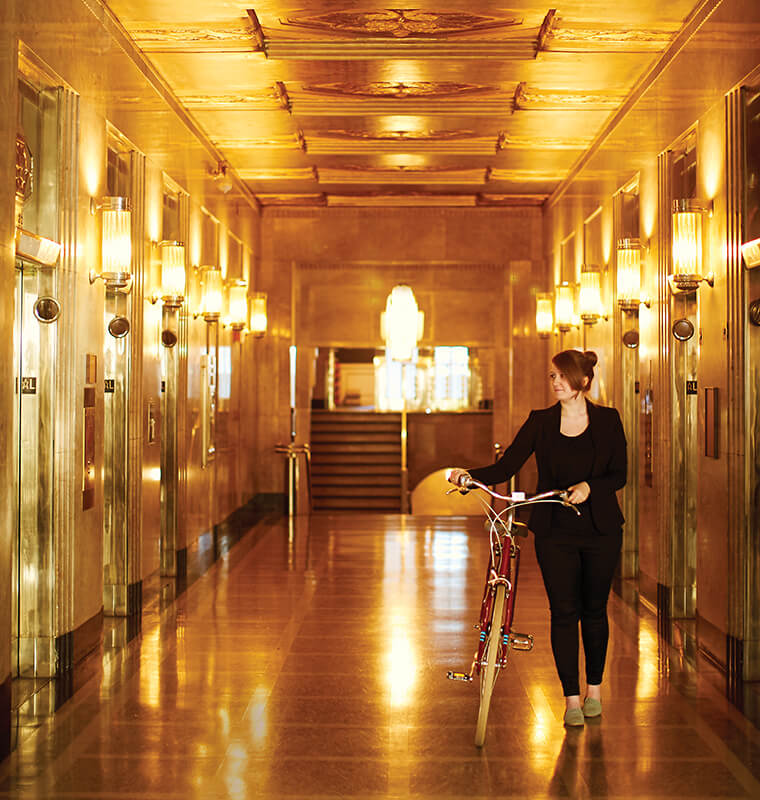 The waiting area for the elevators looks the same as it did in the building’s heyday, full of brass and marble. photograph by Stacey Van Berkel

The building became a fortress, and only tobacco company employees or guests could make it past the lobby. You could see it from anywhere in town, except from the inside. “Very few people in town had been in it in recent years,” says Chris Jordan, a local historian who, until recently, worked for the New Winston Museum. “It was much less accessible in the last 20 years.” By 2010, RJR had moved the last of its employees out of the old building.

Even when it was vacant, the building remained a fascination. Now, a combination of pride and curiosity is luring people inside again. And those who used to spend their days here now come to spend the night.

Eric Stewart remembers walking into the building for a job interview in 1988. This is awesome, he thought. This is where I want to work. He took a position as a supervisor at RJR’s massive Tobaccoville plant before a promotion put him in the Reynolds Building itself. “To have your office in that building, you knew you had accomplished something,” he says. Moving up in the company literally meant moving up through the glass, marble, and teak interior. “And the higher up you got, the prettier it got,” he says.

On the top floor, The Cardinal has turned the wood-paneled and chandeliered executive offices into conference rooms. Little has been done to Bowman Gray’s spacious inner sanctum. The small fireplace is intact and the ceiling still soars. The dark wood is as stately as ever.

The 20th floor treats guests to a 360-degree view of Winston-Salem: look east to the sprawling former cigarette factories, which have been repurposed as restaurants and research labs. To the south, Wachovia Bank’s former headquarters is now the tallest building in town, rising 34 stories. Next door, to the west, is Womble Carlyle Sandridge & Rice, the state’s largest law firm. To the north is Wake Forest University’s Wait Chapel, with its steeple perfectly positioned in front of Pilot Mountain. It’s safe to say that none of these things would be here without R.J. Reynolds, whose portrait, along with Colonel Winston’s, is woven into the carpet in the boardroom and mezzanine. 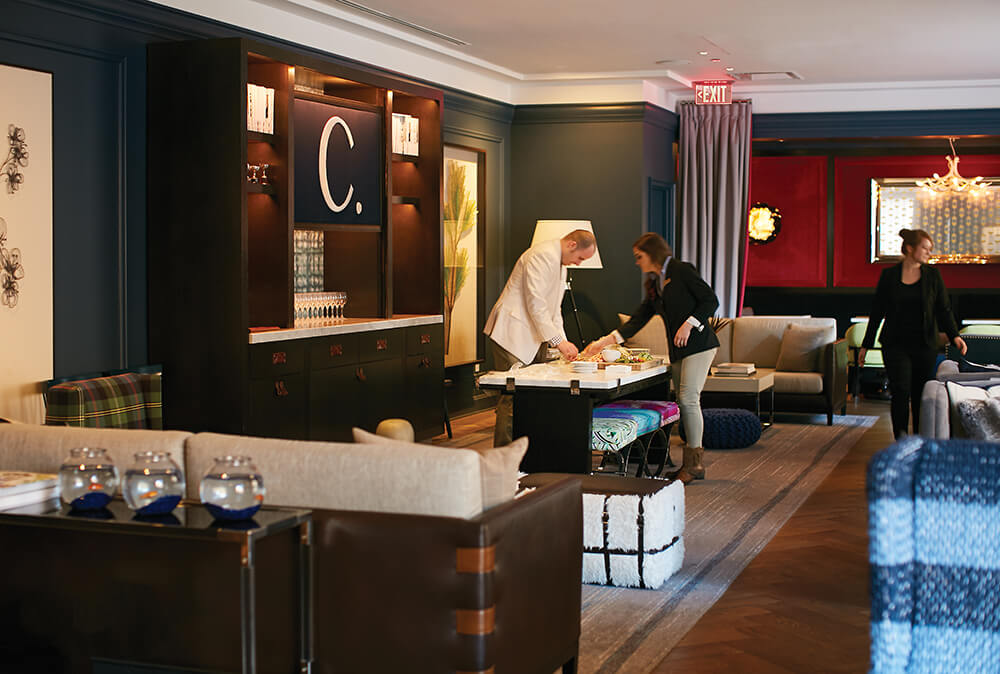 Every Kimpton hotel has a comfy communal space called the “living room,” which is tailored to each city. photograph by Stacey Van Berkel

The Cardinal (named for the state bird) is full of little North Carolina touches. Throw pillows in the guest rooms are adorned with the Plott hound and the eastern tiger swallowtail, the state dog and butterfly. In the lobby, or “living room,” Moravian cookies and sweet tea are set out. Adorning the wall is a longleaf pine branch created from matchsticks. The furniture is upholstered in Carolina Tartan. A conference room has words from Maya Angelou’s “Still I Rise” stitched into the carpeting. In all, 42 distinct North Carolina artifacts are strewn throughout the property. One employee said she’d considered making the list into a scavenger hunt for guests.

There are modern touches, too, from the design of the guest rooms, to the French-themed Katharine Brasserie and Bar (named for Reynolds’s wife), to the boiler room turned into a rec room that’s full of flat-screen TVs, games, a bowling alley, and an adult-size slide. But it’s not the facelift that’s the draw; it’s the soul of the place that was a symbol of what Winston-Salem was, and still could be. “It feels like a big-city place,” Jordan says. He, too, has spent the night. “You feel like justice was done to the building.”

And in that way, the place is intact. It still stands for something. Dr. Gottlieb had been back in the building a few times since he moved his practice out in 1981. His former office is gone — turned into apartments. But as he walked through the rotating brass-and-glass doors and laid his eyes on the gray-and-gold lobby, a feeling came over him: It’s still beautiful, he says. “It was like an old friend.”