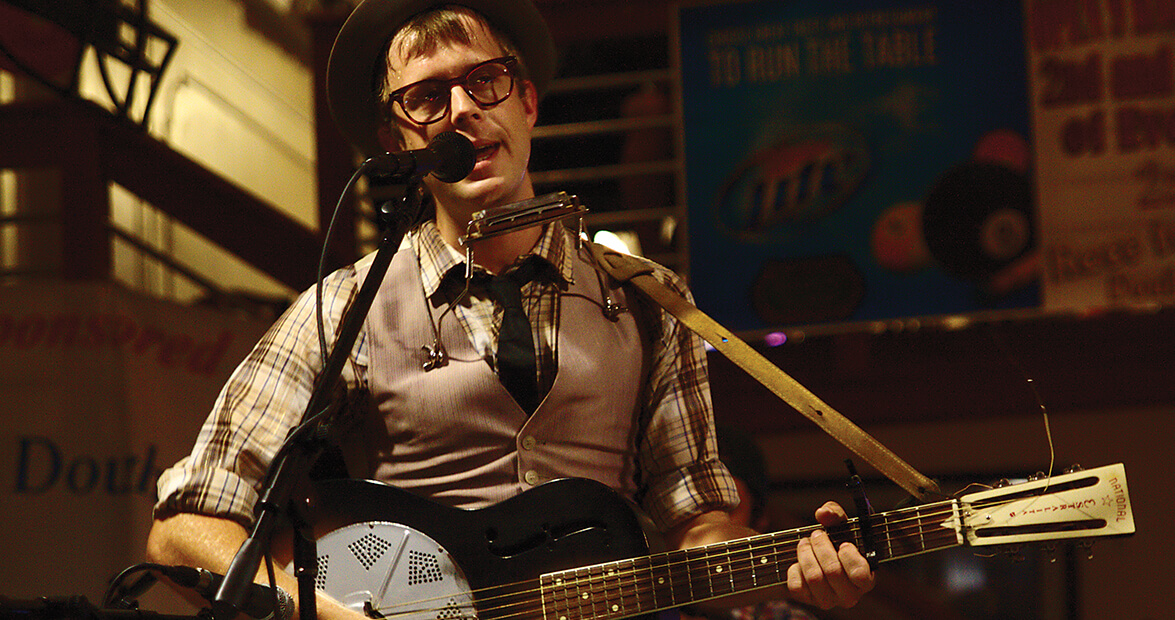 It’s Saturday night at the Altamont Brewing Company in Asheville. The lights are low, and Woody Pines takes the stage in his suit and bow tie.

Pines plays his mix of jazzy old-time and country blues music through an old accordion amp from the ’50s. Onstage, he speaks like an auctioneer. “You might think that a lot of these songs are about cheatin’, lyin’, stealin’, chewin’ tobacco,” he says. “They are.”

The banjo player and bassist on either side of him don’t move around much, but Pines can’t stand still. He bobs his head and slides his feet, dancing as much as the tiny stage will allow. The audience sways along with beers in hand. And because Altamont is the kind of laid-back place where people wheel their bikes inside, someone’s brought their beagle in with them. At one point, the little dog wanders onto the stage. It’s a lively scene.

“We’re glad to be home in front of a hometown crowd,” Pines says.

Pines has traveled many miles to get here. He grew up in New Hampshire and received his first instrument, a Sears drum kit, from his parents at 8. Learning to play the drums was a good foundation, he says, that gave him the rhythm he needed later when he learned guitar, piano, harmonica, banjo, and fiddle.

After he graduated from high school, Pines went to Eugene, Oregon, where he played in a jug band called the Kitchen Syncopators. After a couple of years, they left the rainy Northwest for New Orleans, where they could play on the sidewalk all winter. In 2003, Pines parted ways with the band to play old-time fiddle in Asheville. He found balance working at a bed-and-breakfast, where he gardened in the morning, and “cast spells” with airy music at night.

But he isn’t here much these days. He played about 200 shows around the country and in the United Kingdom last year.

“If I didn’t have such an idyllic place to come back to, it wouldn’t feel as good,” he says. “It reminds me of home.”

Pines grew up on folk music, but he wasn’t happy singing every word and playing every note exactly as those old songs called for; it didn’t capture the joy of the early recordings. “I’m not afraid of change,” he says. “What I loved about the old jazz was the spirit of it.”

At first, Pines felt guilty about changing the songs. But then he came across a Doc Watson interview, one where Doc described himself as a “tamperer.” He realized he could take the best of the traditional songs he’d grown up with, and infuse them with a modern sensibility.

“If there’s a lyric I can’t relate to, I change it,” Pines says. “You have to sing about stuff you believe in.”

When he was a teenager, Pines journeyed to see some of his favorite musicians — Ramblin’ Jack Elliott, Pete Seeger, Utah Phillips. It made him think about reinvention.

“The rest of the world envies that about America, that we have so much space where we can recreate ourselves,” he says.

Woody Pines, the character, is one among many in the American narrative. Pines, the man, believes that these characters can live together somewhere. And maybe, in a small town on a highway, there’s a bar. John Henry is there, and Mark Twain. And Woody Pines is there, too, wearing his three-piece suit and getting ready to make people dance. 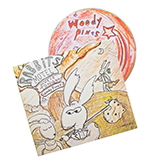 Woody Pines has released several recordings of traditional songs, but his recent album, Rabbits Motel, is mostly original material. The record is firmly rooted in Pines’s adopted home: it’s named for his favorite, though now defunct, soul-food restaurant in Asheville; and one of the songs, “Addicted to Blood,” is a nod to nearby Bat Cave and Transylvania County. Another, “Train That Carried My Gal,” was made famous by Doc Watson.