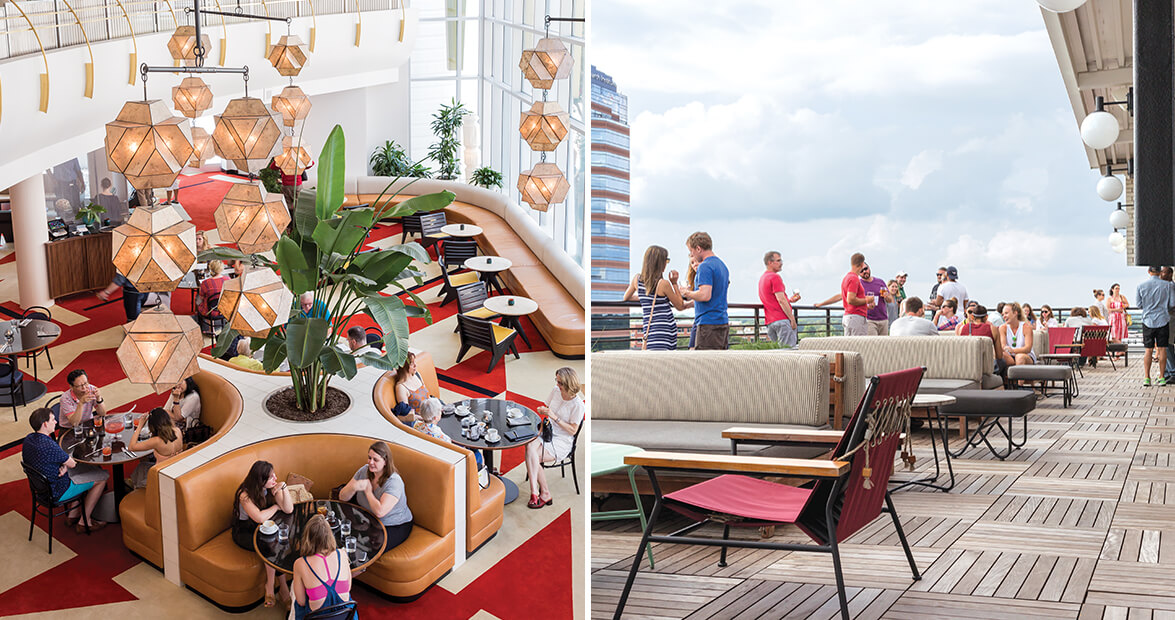 Yes, there’s a whole hotel here, but at The Durham, the place you want to be is on top. Six stories up is the wooden-floored, open-air rooftop bar, where bartenders mix fancy cocktails to accompany beef tartare and picnic eggs. In the off-hours, it’s used for yoga. Tonight, it’s packed with people — kids who surely had their IDs checked, an older couple talking intensely on a gray couch, a woman looking pensively off into the distance. At some point, every person leans against the rail and looks out at the panoramic view of the nearby brick and limestone buildings, where old and new Durham meet.

The hotel part is below: 53 guest rooms with local touches. The bedspreads are handmade by Raleigh Denim. The snacks are “locally curated.” Everything else is mid-century modern: the low-slung beds; the small couches; the boxy red nightstands; the white and gray walls; the deep blue carpet; even the outside of the building itself, where a round stairwell is sheathed in white, and “The Durham” runs down the side of the building in individual block letters.

On the bottom floor, the lobby feels like it was plucked out of the 1964 World’s Fair. It turns from coffeehouse to restaurant at night, where waiters in dark jeans and chic denim shirts take orders for oysters. James Beard Award-winning chef Andrea Reusing designed this culinary experience. At least 90 percent of her food is locally sourced — at any given time, the menu might include braised greens from Pittsboro, eggplant from Hillsborough, and chicken from Rutherfordton. With just a little prodding, a couple sitting in a soft leather booth shares a 28-ounce steak, along with Baked Alaska for dessert.

This place was built in the late 1960s. The 1980s savings and loan crisis knocked out the first bank that was here as a tenant, and a 2008 merger forced out its successor. When some Duke University grads started buying downtown buildings in Durham, they snapped up this one without really knowing what they’d do with it. Eventually, they decided on a hotel and hired a firm out of Los Angeles, one familiar with modernizing 1960s-era homes while leaving their charm intact. The clean lines remain, and the furniture is new but looks period-appropriate. The accents are white and gold; the carpet is lush and colorful.

This hotel, which opened in July 2015, is riding a rising tide in Durham, where downtown restaurants are leading the way with new ideas and a youthful energy. “People describe it as a ball game,” the hotel’s general manager, Craig Spitzer, says about the downtown vibe, “and we’re in the fourth or fifth inning.” A lot’s already happened, but there’s still a lot to come. At The Durham, the only thing that’s slow is the elevator. If you listen hard enough, you can hear a faint train whistle, but even that just feels like a retro touch.