A few minutes after sunset, 56 lights illuminate Greensboro’s LeBauer Park, and you can hear the gasps. Some folks stop and look straight up. Others lie on their backs and soak in the view. They stare at a sculptural net with connecting ropes that stretch nearly two-thirds the length of a football field, and they watch the blues and pinks, the oranges, yellows, and purples shimmer overhead.

The 90-foot-long net billows like a sheet on a clothesline in a slight breeze. But don’t let the apparent weightlessness fool you. The custom-made fibers of the ropes are stronger by weight than steel, a Herculean strength that helps the net withstand Mother Nature’s gales.

Thirty-five miles of fibers stretch like a spiderweb between four 60-foot pillars. That spiderweb is an 1896 historical map of North Carolina’s textile region. The center is Greensboro, and the fibers stretching out represent the rail lines that once linked the area’s textile mills and made Greensboro the Denim Capital of the World.

When it went up in the summer of 2016, the Where We Met aerial sculpture was the largest outdoor art installation in the Southeast. Its mesmerizing design springs from the curious mind of Massachusetts artist Janet Echelman, whose huge woven artworks once topped Oprah Winfrey’s list of “50 Things That Will Make You Say ‘Wow!’ ”

When where we met first appeared over downtown Greensboro, locals versed in art were prompted to ask, “How did we get an Echelman?” The piece came thanks to a constellation of supporters. One was Adair Armfield, chairwoman of the Edward M. Armfield Sr. Foundation. Her late husband was an Asheboro native, a longtime Greensboro resident, and a textile industry visionary. The foundation that his wife helped create in his name provides hundreds of scholarships to support students who want to continue their education. Armfield also sees art as a way to educate, and she wanted an artistic piece in Greensboro that depicted the city’s rich textile heritage.

“I’m a cloud lover. I love to gaze in the sky … and I pictured something in our beautiful sky.”

But Armfield didn’t want just a statue. She wanted something full of wow. She found inspiration during a visit to Chicago, where she saw artist Sir Anish Kapoor’s Cloud Gate, a 33-foot-tall sculpture created from 168 stainless-steel plates. “I’m a cloud lover,” Armfield says. “I love to gaze in the sky when it’s that beautiful blue, and I pictured something in our beautiful sky.” 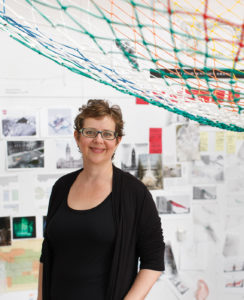 Armfield’s idea got Cheryl Stewart busy. Stewart is no stranger to public art. She’s worked on installations in locations from Miami to New York City. Today, she’s the project coordinator for the Public Art Endowment of the Community Foundation of Greater Greensboro, the driving force behind LeBauer Park, a $12 million endeavor. When a local artist told Stewart about Echelman, a conversation began. “I remember sitting on the steps on the back patio, talking to Janet on the phone when she said, ‘OK, I’ll come down. I have a really good feeling about this,’” Stewart says. “I felt like I won a big prize.”

Echelman felt that she’d won a big prize, too. She received a $1 million grant from the Armfield Foundation to create the aerial sculpture. As she researched the city’s textile past, she discovered in its present a collaborative spirit rare in other cities where she’s worked. “Their Southern hospitality overwhelmed me in a positive way,” Echelman says. “To me, it felt like my artwork would really mean something here.”

It does. Where We Met symbolizes the boldness of a progressive city, a place proud of its Quaker values and its civil rights history. You see that spirit at LeBauer Park. People come to protest, play, picnic, reflect, and breathe deep beneath a huge net of colors billowing in the breeze.

Louis Allen lives less than a block away. He walks past the net often on his way to work or to eat downtown. “It lets you know where you are — the center of Greensboro,” says Allen, who works as a federal public defender. “It shows you that this town has a heart and a soul.” 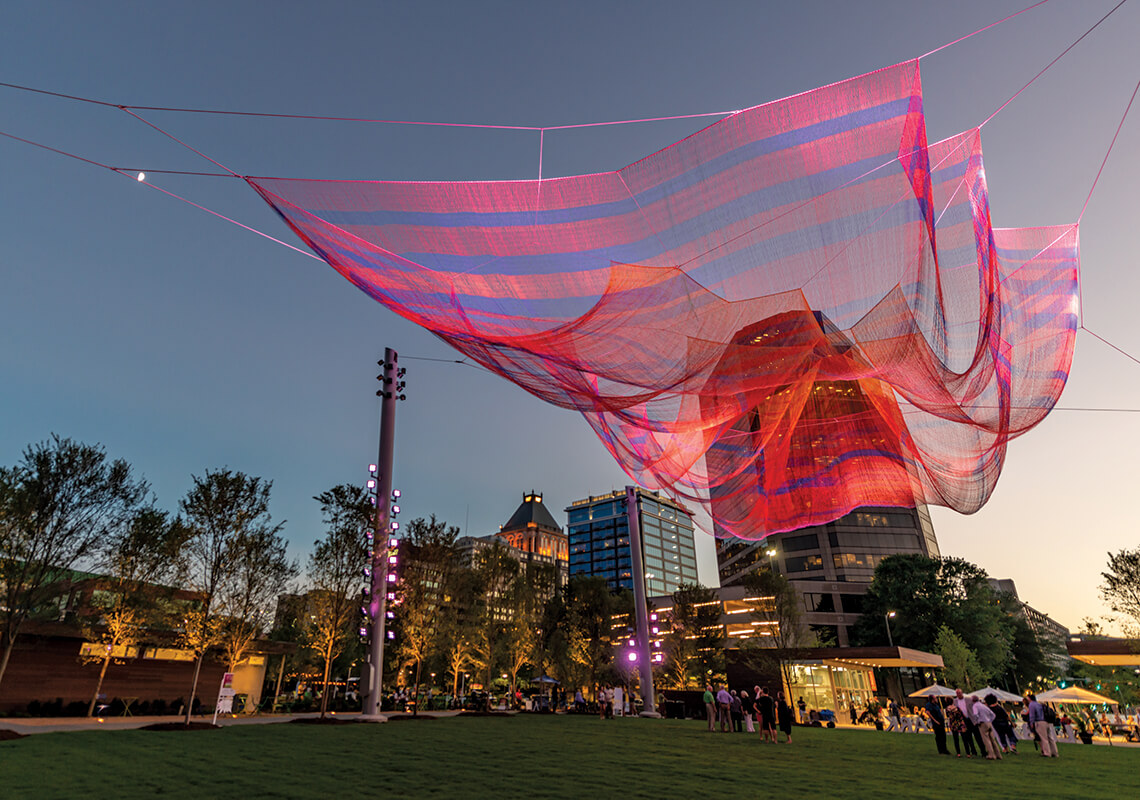 To create the 90-by-65-foot net that drapes over the park’s 17,000-squarefoot Great Lawn, artist Janet Echelman used 35 miles of fiber — roughly the distance between Greensboro and Lexington. photograph by LYNN DONOVAN

The net is one of only 15 permanent art installations that Echelman has created worldwide. It comes down every December to protect it from ice, and it goes back up in the spring. Like a butterfly emerging from its cocoon, the net will soon begin changing colors. This feature — which will happen approximately every five years — is a first for Echelman, and she’ll start it in Greensboro. The next color? Red with multiple shades of blue, to represent the denim of Greensboro’s past. “I see it as a story of a city reinventing itself for a new century,” Echelman says of her net. “A physical manifestation of how we can reshape our relationship with nature and each other.”

Echelman came up with the name Where We Met because her creation represents the railroad lines and textile mills that brought together people from diverse races and cultures. Today, people from all walks of life gather on Greensboro’s front lawn. LeBauer Park is no longer parking lots and a handful of buildings. It’s four acres of open space with fountains, a playground, a dog park, a garden, a performance space, a putting green, two food kiosks — and a net.

Every year, under the net, LeBauer Park hosts 450 public events and 50 free concerts. From social justice rallies to family movies on Friday nights, it’s become the place to speak and see, to watch and listen.

Every moment of the day, people make memories.

Take Sharon Gray. She’s “Shay Shay” to her 4-year-old granddaughter Riley. On a late Saturday afternoon, Gray trains her iPhone camera on Riley as the child bolts back and forth on LeBauer Park’s Great Lawn. Just after sunset, the net begins to glow.

Riley can’t get over what she sees.

“It looks like the grass is pink and the sky is orange!” she exclaims. She admires the view just momentarily, before running back underneath the net, her arms outstretched like a superhero in flight.