When Andrea Millington and her husband, Stephen, started serving food at the fair two decades ago, they were eager to share dishes from Andrea’s native Jamaica, like beef patties, jerk pork, and curry chicken. It took some time for word to get around, but their hard work has built a loyal following. Stephen cooks the meat and makes the curries — a big deal in Guyana, where he’s from — while Andrea prepares dishes like white chocolate bread pudding, plantains, and her grandmother’s rice and peas. Their three sons, initially too young to work at the fair, now return to help every October; during the rest of the year, they’re constantly sampling new foods to help inspire their parents. In fact, their eldest son’s idea for a jerk pork wrap with mango salsa won “Best New Food” at the fair in 2018. “Cooking is a really big deal in our household,” Andrea says. “From a cultural perspective, that’s what we do.” Soon, the Millingtons’ jerk seasoning and barbecue sauce will be available by the bottle so that their customers can take home a taste of the State Fair, too. 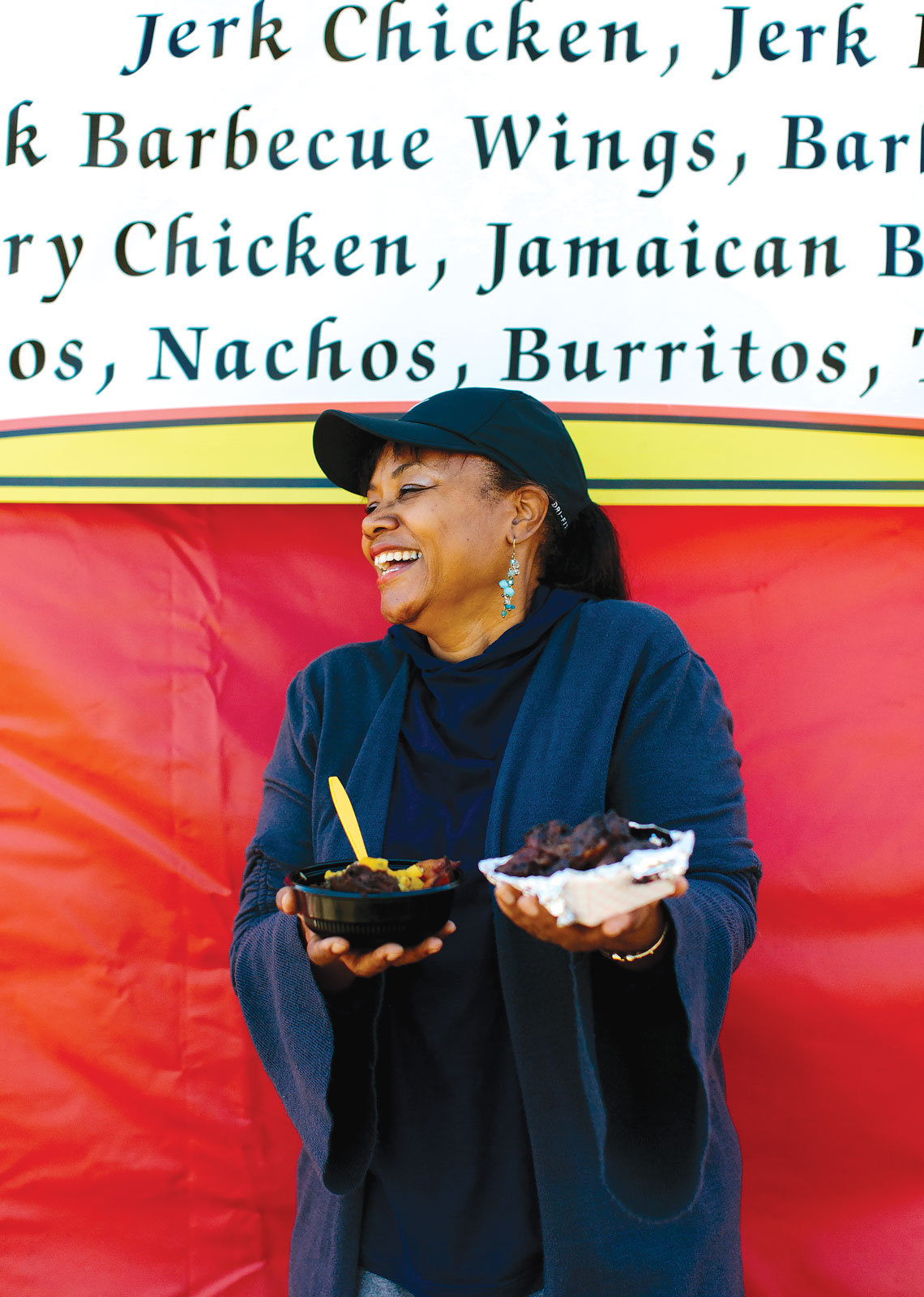 Along with her husband, Stephen, and their three sons, Andrea Millington serves up jerk barbecue wings and ribs, jerk chicken bowls, and more. photograph by Anagram Photo

Feeding fairgoers has been a tradition for Bess McBride Brinkley’s family since the early 1900s, when her great-grandfather opened a food booth at the Rockingham County Fair. During the Great Depression, her grandfather Woody McBride left home with his brothers, finding work on the road with a traveling carnival. When he returned to North Carolina in 1932, he started his own concession company, making a name for himself at the State Fair and the Dixie Classic Fair in Winston-Salem. His daughter Bettie helped him build the business, and later, her daughter Bess and son-in-law Bob took over, never forgetting Woody’s philosophy: “Papaw always said, ‘Never put anything on a plate you won’t eat yourself,’” Bess recalls. As a result, McBride Concessions serves carnival classics like sausage and peppers, ribs, and barbecued chicken. But their most eye-catching offering is their turkey legs — a giant snack for the larger-than-life State Fair. 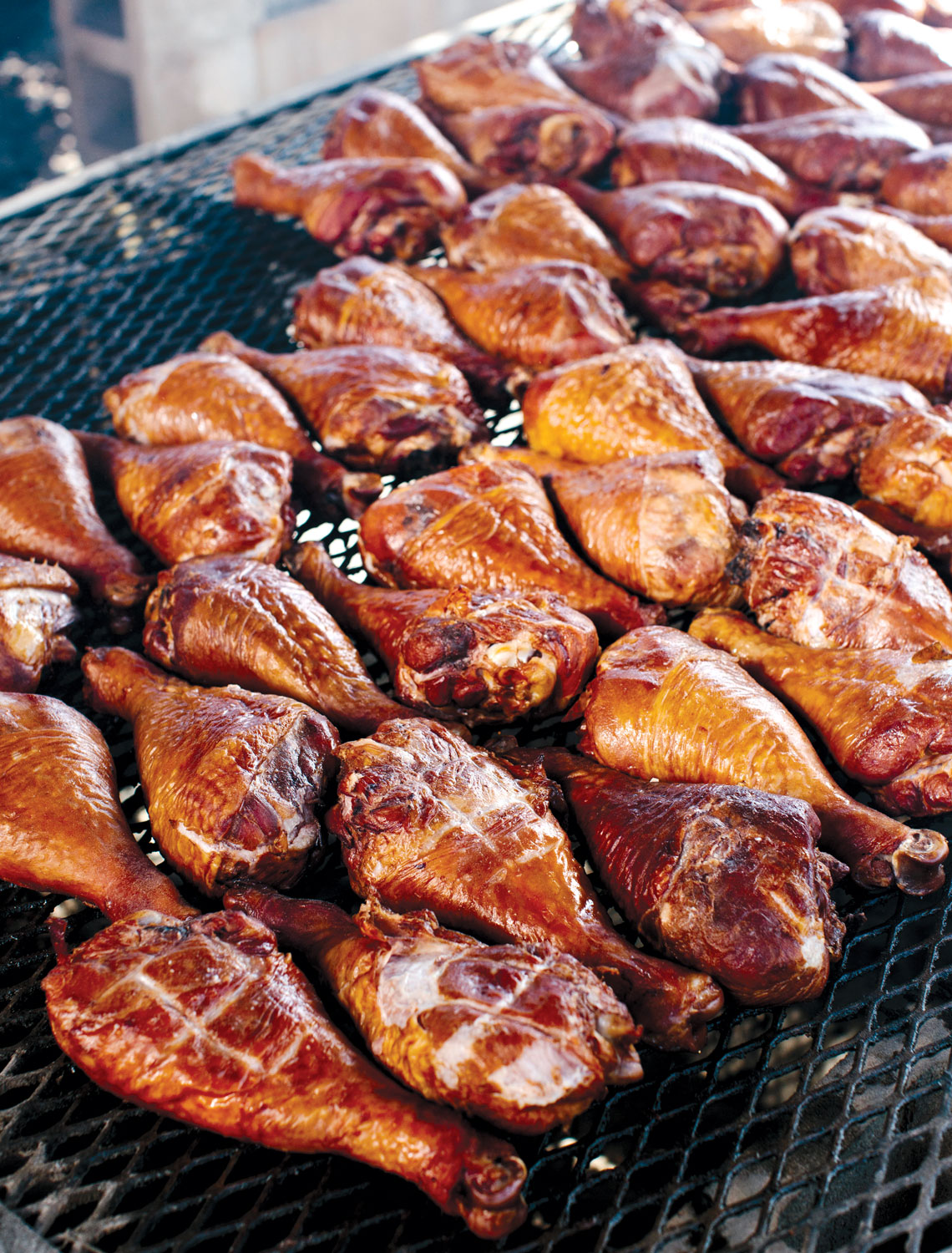 Bess McBride Brinkley and Chuck Denney cook plenty of giant turkey legs to keep customers like Cory Wessel (below left) and Amir Barzin fueled up for a day at the fair. photograph by Anagram Photo 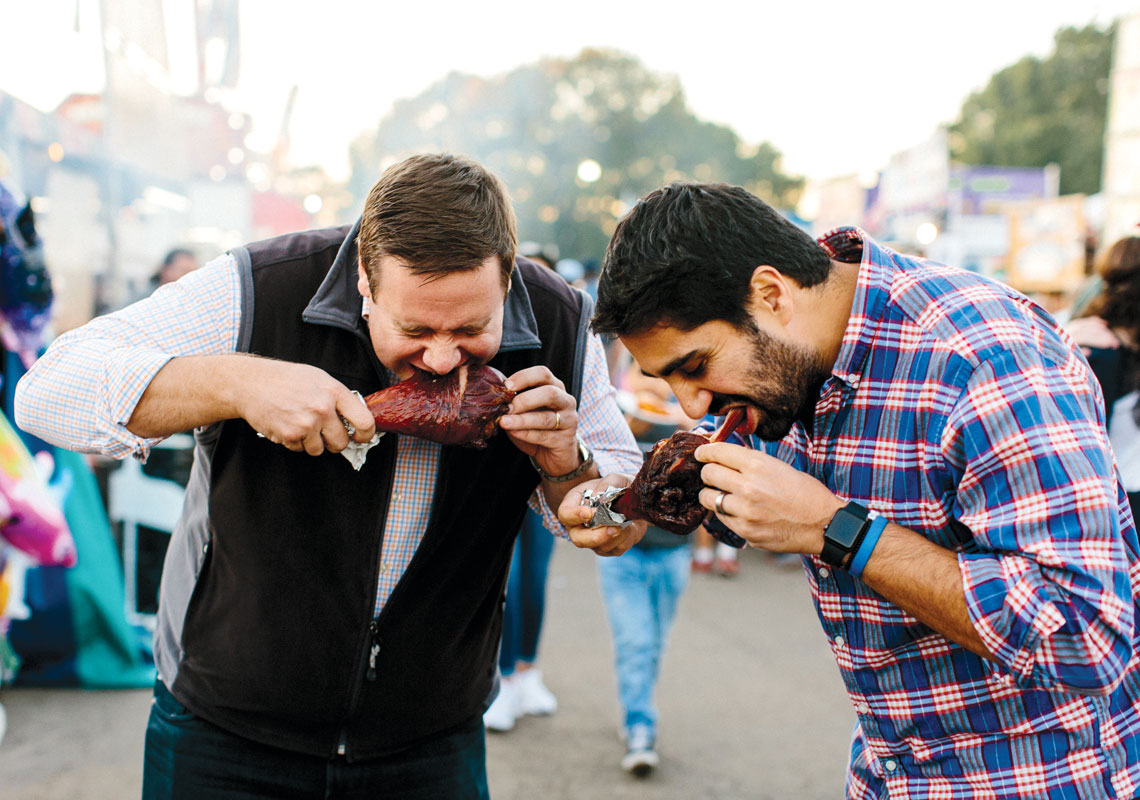 Hot, crispy fries, plain or dressed simply — with ketchup, malt vinegar, hot sauce, or seasoning — have been the draw at Al’s for six decades. In 1959, the first year Al Beckwith set up at the State Fair, he sold ice cream from a hand-built wooden concession stand. He found that people seemed to prefer French fries — so from the next year on, that’s what he served. After Al’s death in 2004, his daughter, Debbie Beckwith Anderson, took over the stand with her brothers, Jeff and Glenn. Although they had to replace the original wooden booth in 2015, the siblings have worked hard to preserve the ingredients of their father’s success. “Daddy never changed the recipe,” Anderson says. “It’s been the same thing for 60 years.” Every morning during the fair, Raleigh-based Ford’s Produce delivers 50-pound boxes of potatoes, which are sliced and fried in peanut oil before they’re sent out to customers in heaping paper boats — the bigger, the better 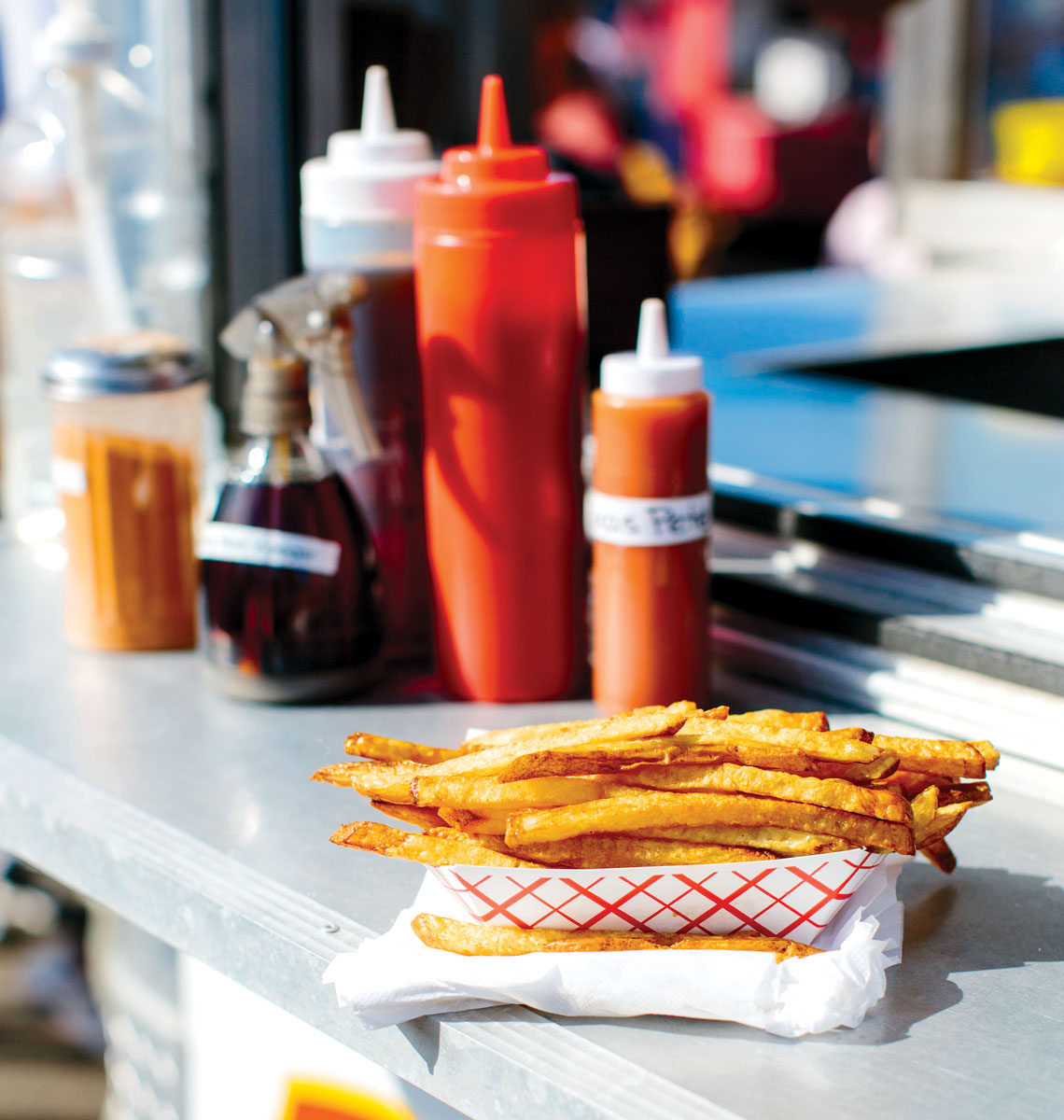 Fresh-cut French fries are simple, yet irresistible. That’s why Debbie Beckwith Anderson (below) and
her brothers haven’t changed a thing about their father’s business. photograph by Anagram Photo 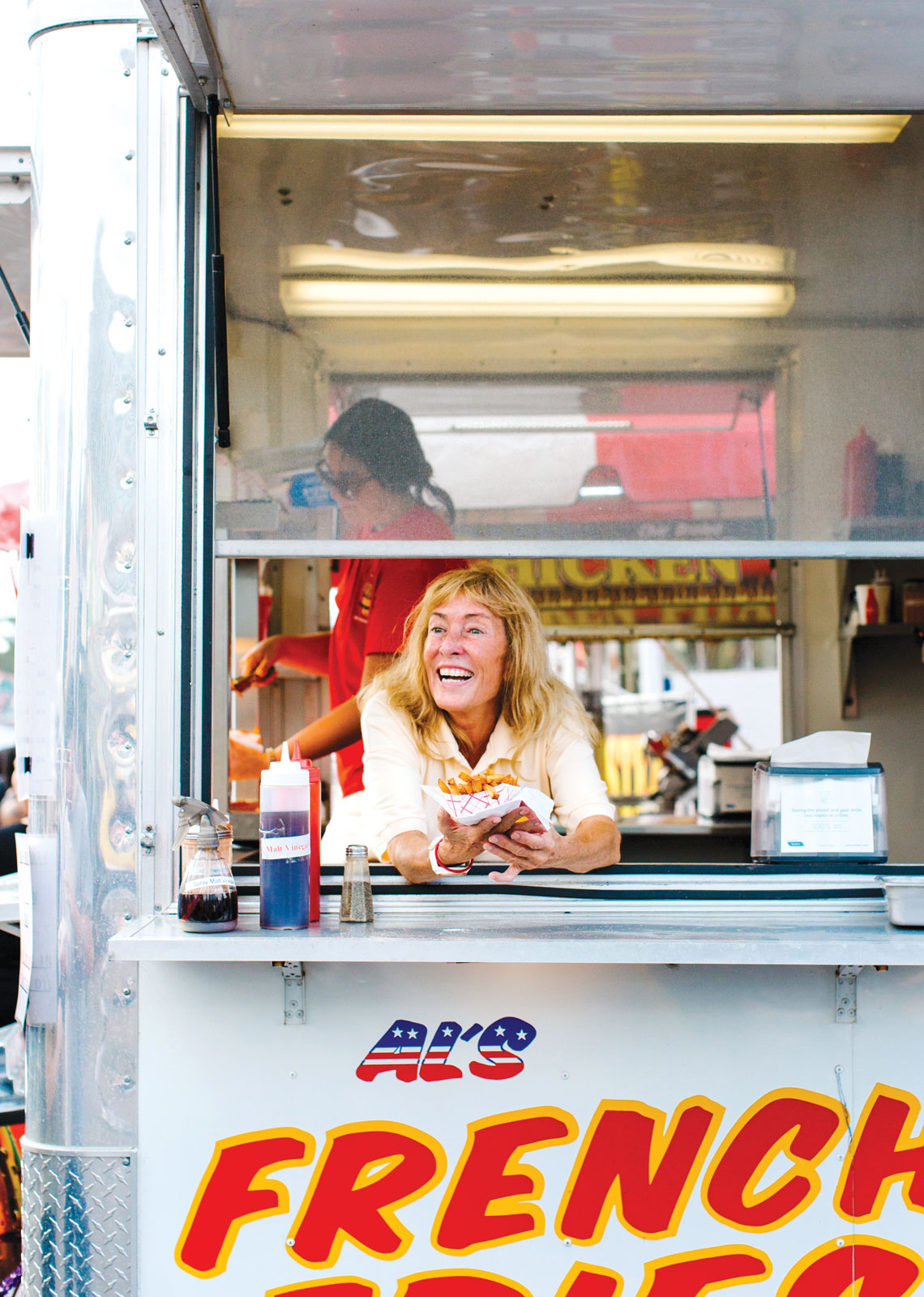 On his way home from working the State Fair one year, Ashley Sheppard was inspired to sell his barbecue at a roadside stand in his hometown, Carthage. That soon led to opening the Pik N Pig restaurant nearby with his mom, Janie, in 2007. They continued going to the fair, where they became known for layering pulled pork, baked beans, and coleslaw into a barbecue sundae. It was the perfect portable meal — and the way the flavors blended together worked. For years, folks in the know would ask for the sundae at the restaurant until, finally, the family added it to the menu. For Ashley, whose role at the restaurant no longer involves much cooking, the State Fair is an exception that he looks forward to every year. He arrives at the fairgrounds at midnight to start the barbecue — as far as he knows, he’s the only vendor to cook there overnight. “You get a whole different perspective of a place if you stay up all night,” he says. “That’s one of the best things about cooking barbecue. Me and the gate guys see some of the most beautiful sunrises.” 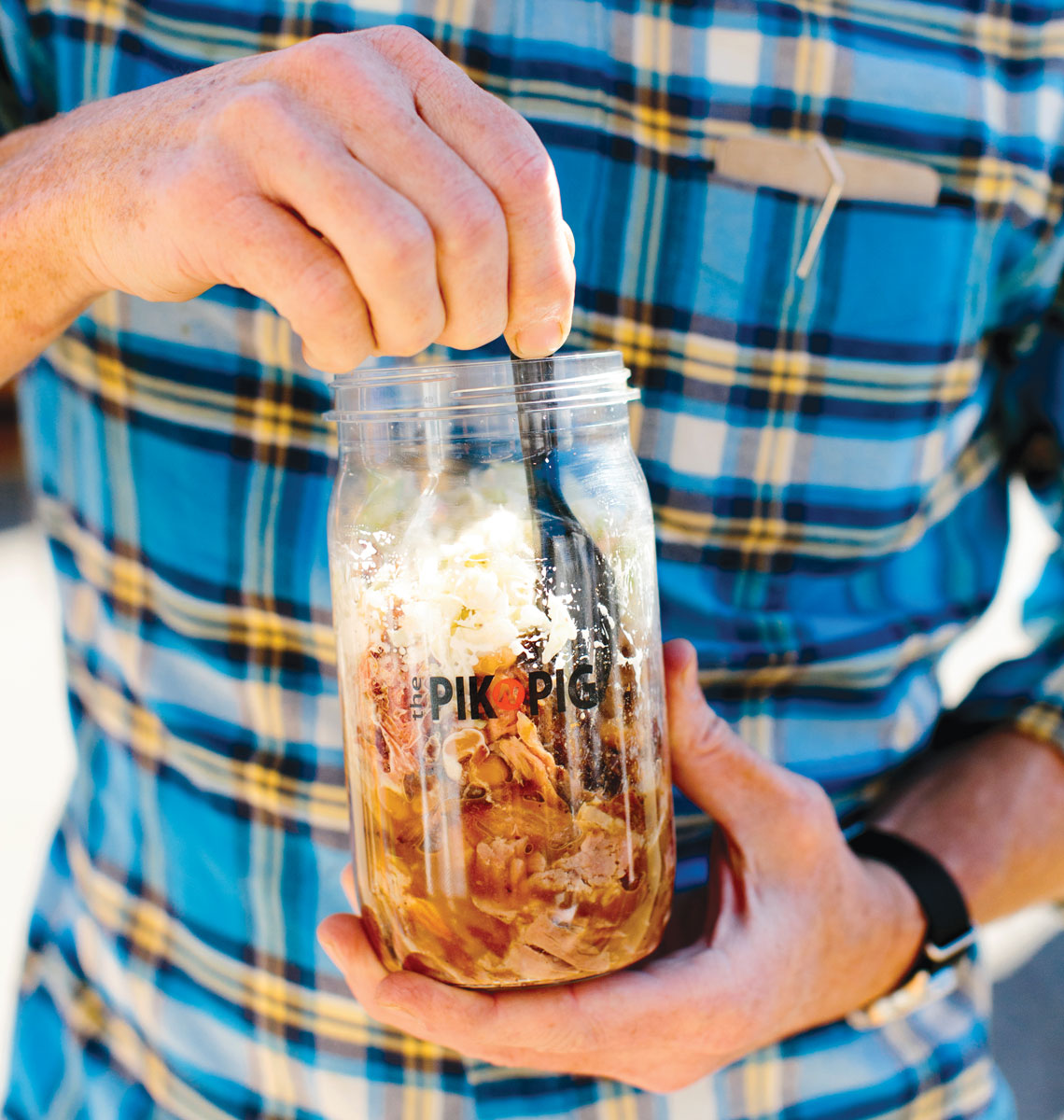 Out of their 10-foot-wide trailer, the Sheppard family serves their famous barbecue sundae: pulled pork,
baked beans, coleslaw, and your choice of sauce. photograph by Anagram Photo 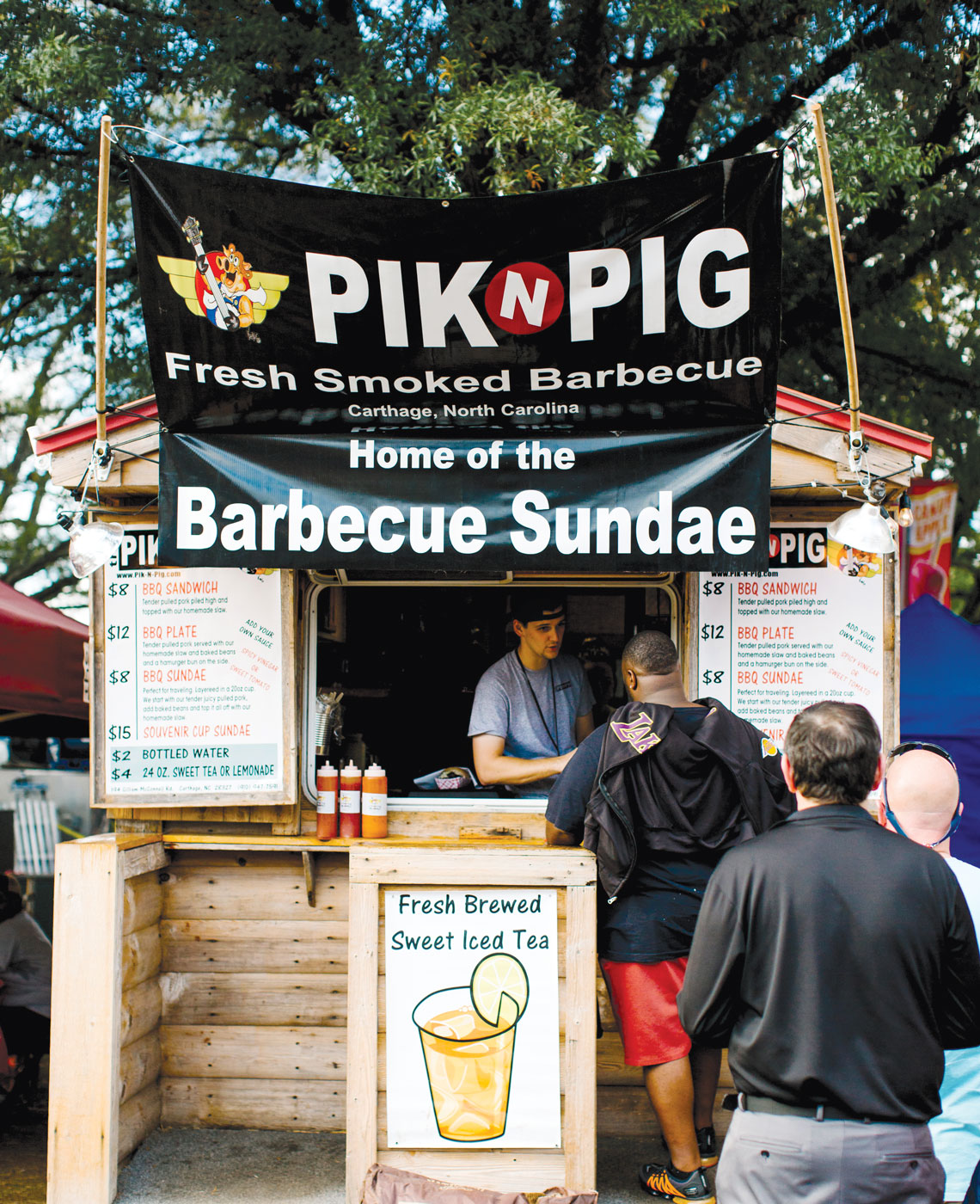 For decades, Charlie Barefoot’s voice rose above the busy fairgrounds, drawing in customers hungry for a hot dog. “How ’bout one?” he’d holler. “Pick one out, and I’ll put it in a bun!” “He loved selling stuff,” his son Billy says. “Peaches at the farmers market or hot dogs at the State Fair.” A farmer from Johnston County, Charlie saw the fair as an opportunity to make a little extra money. In 1949, he started serving up hot dogs — foot-longs from the very beginning — and eventually expanded the menu to include Polish and Italian sausages, Philly cheesesteaks, and chili cheese fries. Charlie died in 2003, but even without his familiar voice, customers keep finding their way to the family’s tent, now run by Billy and his brother Joe. Their own children have been helping “since they were old enough to take an order and make change,” Joe says. “The grandkids aren’t old enough, but they love to come up and eat hot dogs.” 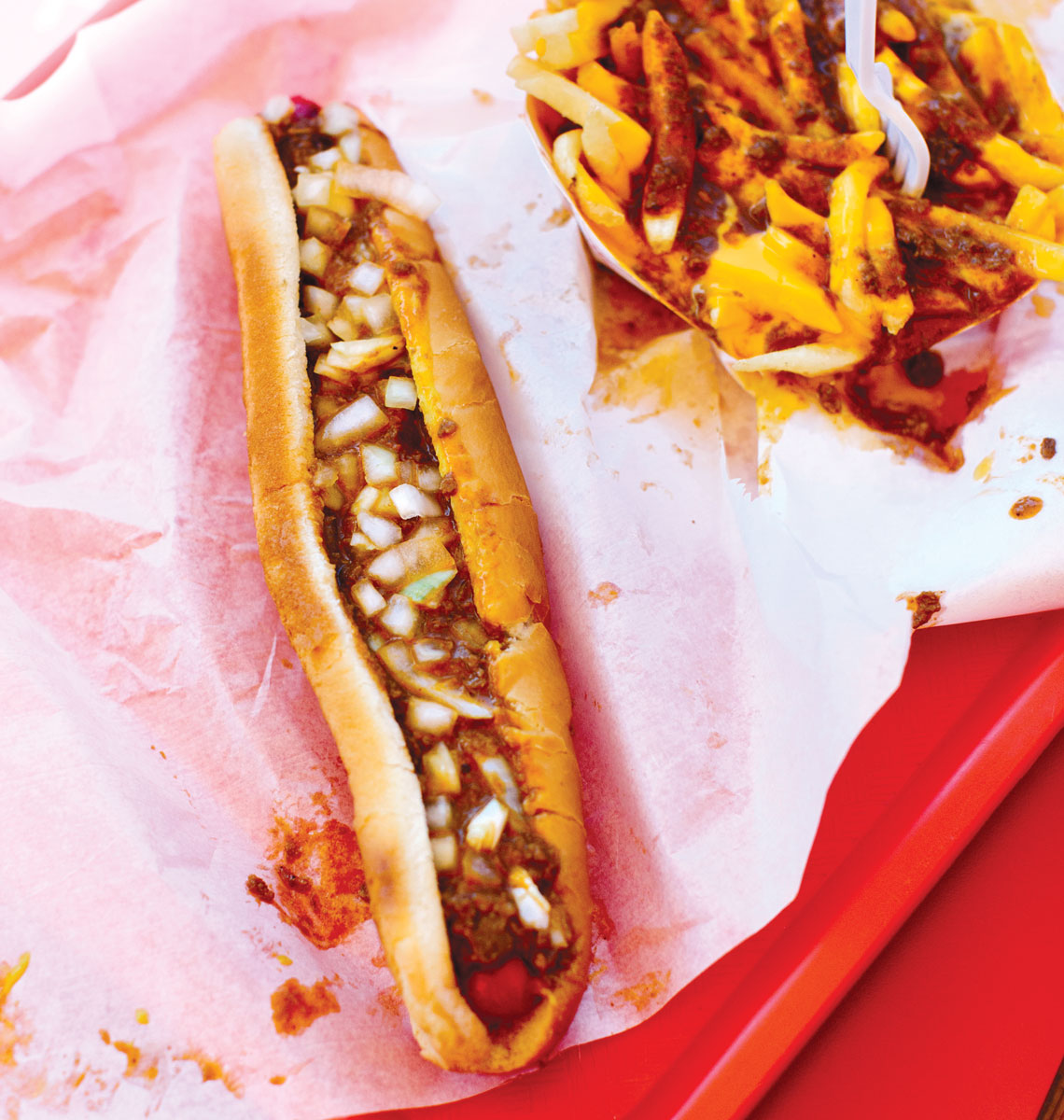 Joe (below left) and Billy Barefoot started serving foot-long hot dogs at their father’s fair booth as kids and now run the business together, with help from their families. photograph by Anagram Photo 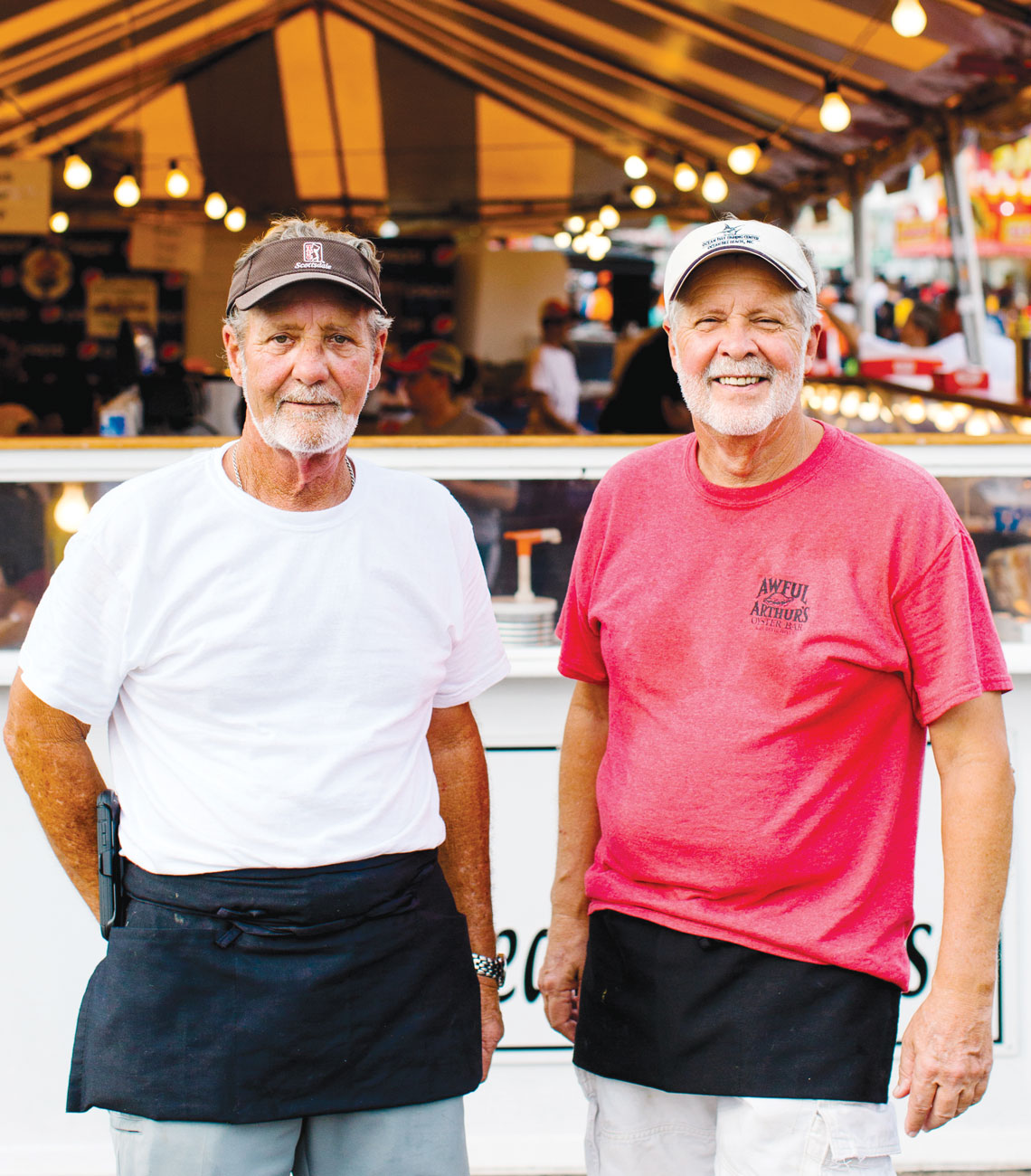 There’s a reason why crowds gather for Howling Cow Ice Cream at the State Fair: The huge scoops are irresistible — and they were made right down the road, on the campus of North Carolina State University. In the late 1970s, students in the Food Science Club began selling “NC State Ice Cream” — made with milk from State’s own cows — at the fair as their annual fund-raiser; the unforgettable name “Howling Cow” was adopted in 2008. Every year, Food Science students help come up with a special flavor just for the fair, like Caramel Apple Crisp and Key Lime Pie. (The best seller, just like on campus, is always Wolf Tracks.) Unlike many State Fair delights, Howling Cow doesn’t come and go each fall — 365 days a year, most Harris Teeters stock State’s famous ice cream in freezers from mountains to coast. And earlier this year, the Howling Cow Dairy Education Center and Creamery opened, offering ice cream in a peaceful farm setting — a few miles and a world away from the bustling fairgrounds. 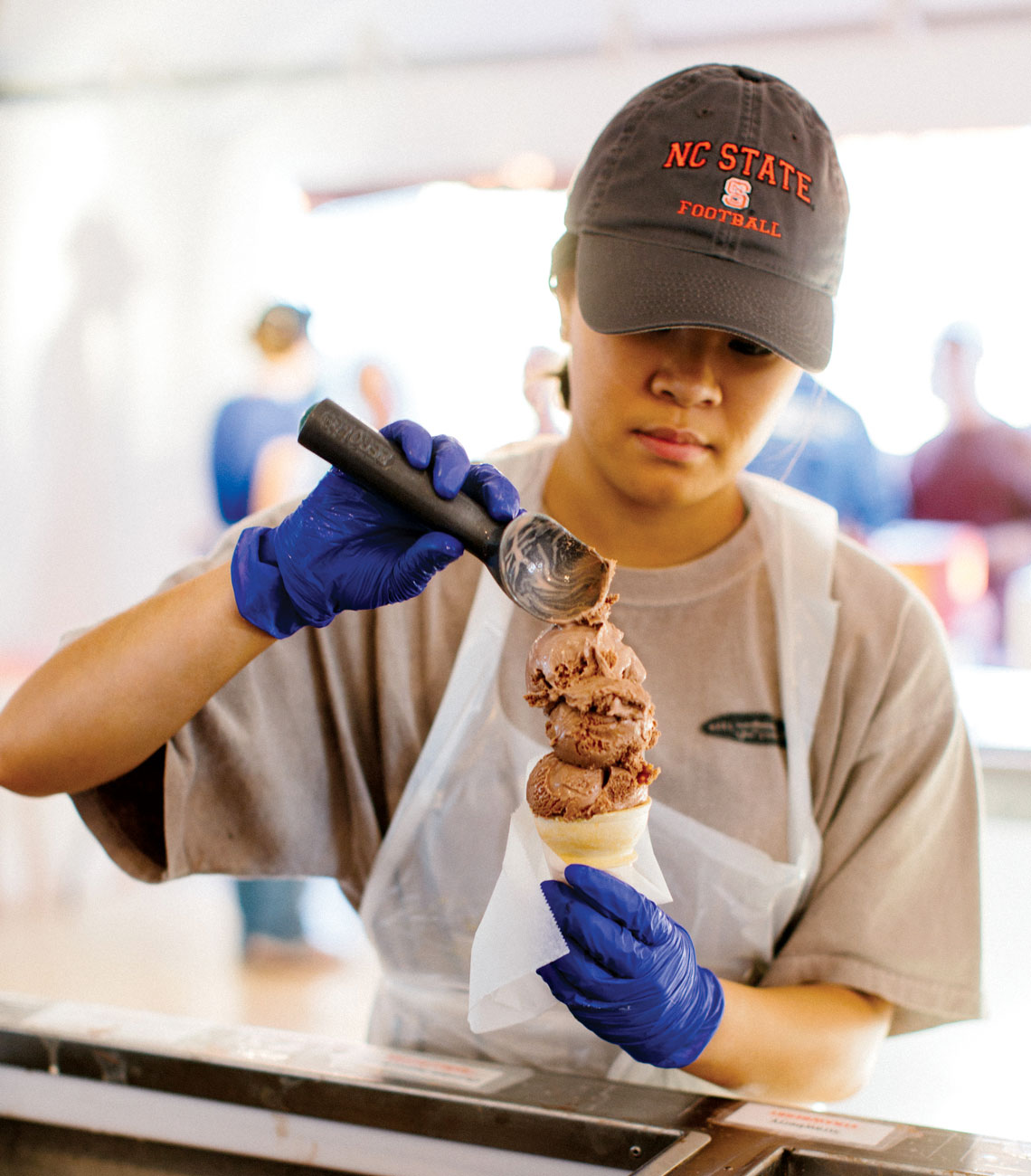 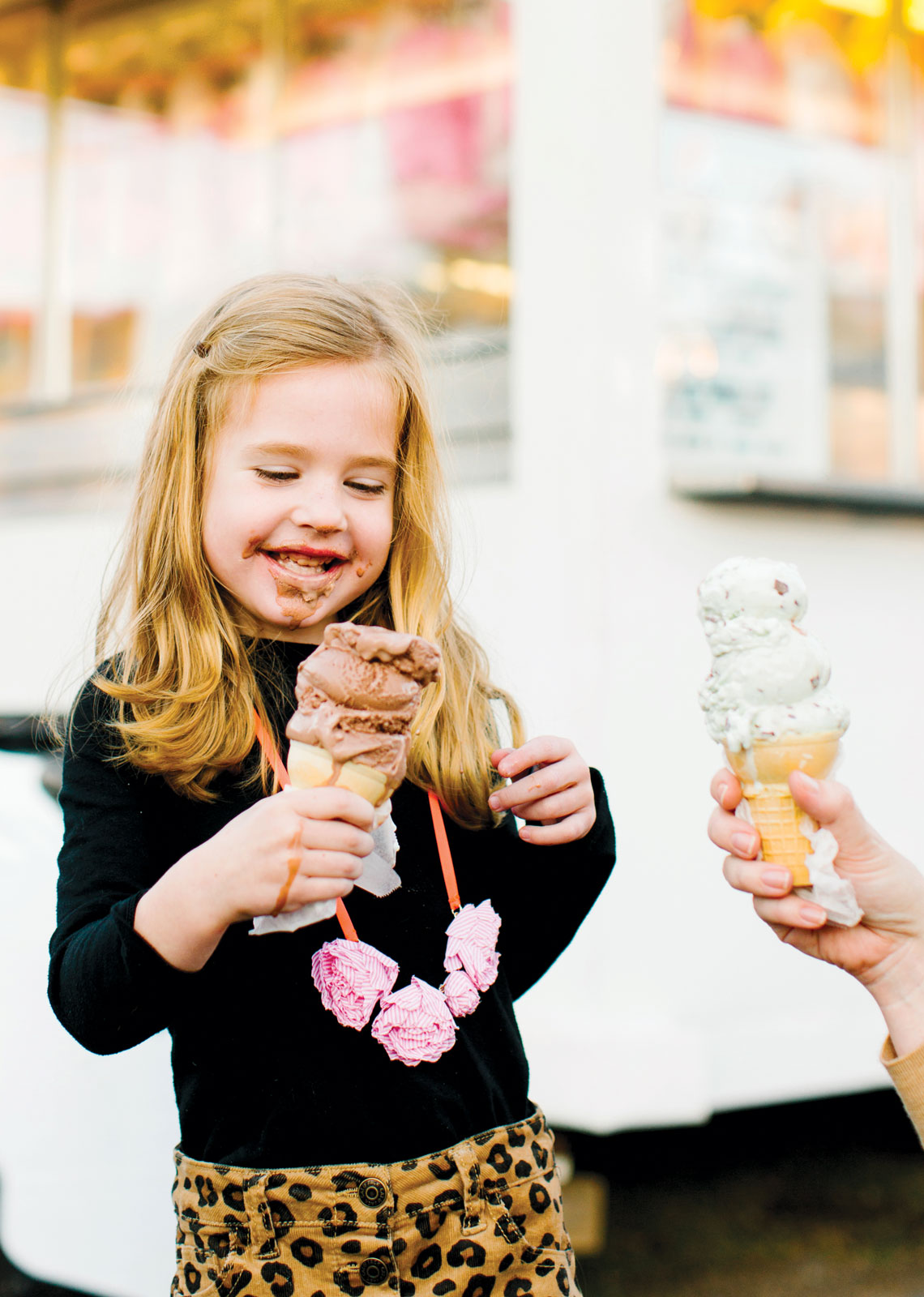 The year Sam Peachey’s family moved to the Amish community in Union Grove, a bad drought threatened their farm. So his mother started a bakery in the garage, making sourdough bread, cinnamon rolls, and doughnuts — yeast-raised sourdough confections that melt in your mouth. In 2007, Sam’s siblings Nate and Sadie began sharing those special doughnuts at events around the country. Though they’re now based in Florida, returning to North Carolina for fall fair season is a tradition, Sam says. “North Carolina feels like home to all of us.” The Peacheys also make soft pretzels and an exclusive banana pudding doughnut just for the State Fair. Yet it’s the simple glazed version that keeps customers lined up year after year — an honor to their mother’s bakery, Sam says. “This is a way that we can help hand down our legacy to future generations.” 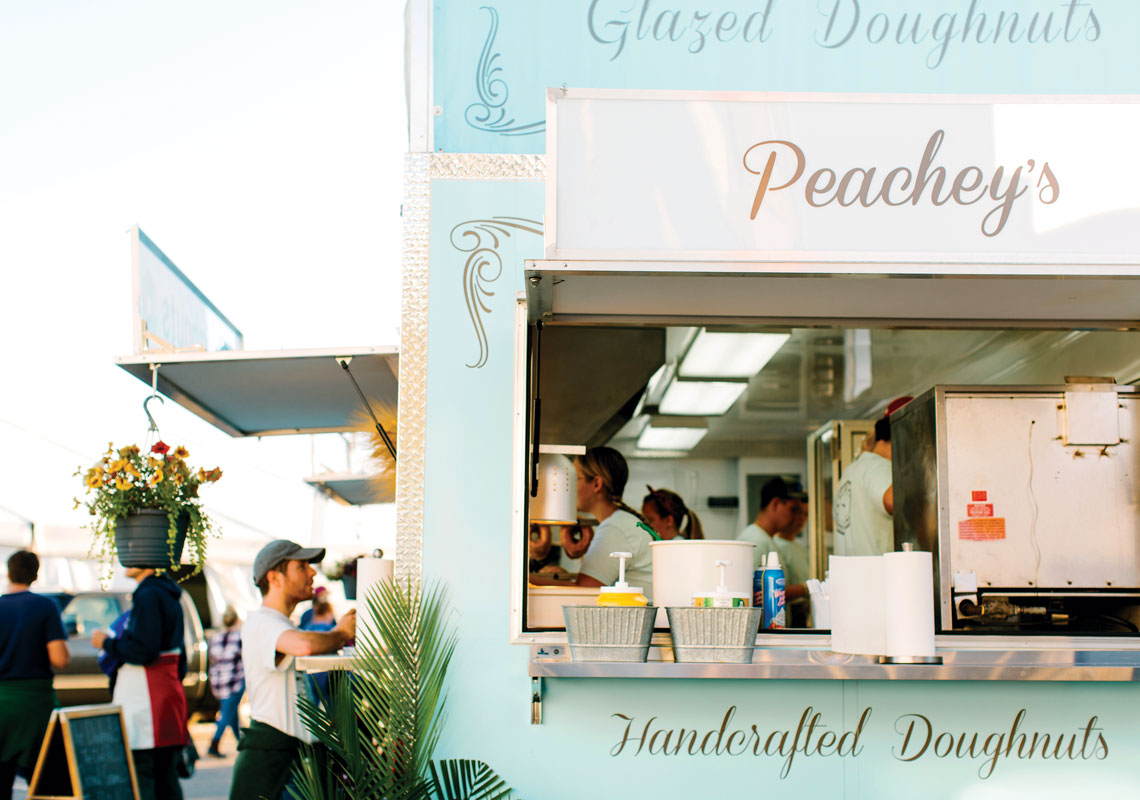 Customers can watch the Peacheys cut out dough with a can and shape it by hand. When the baking process is complete, the doughnuts hang on a rack, dripping with vanilla glaze. photographs by Anagram Photo 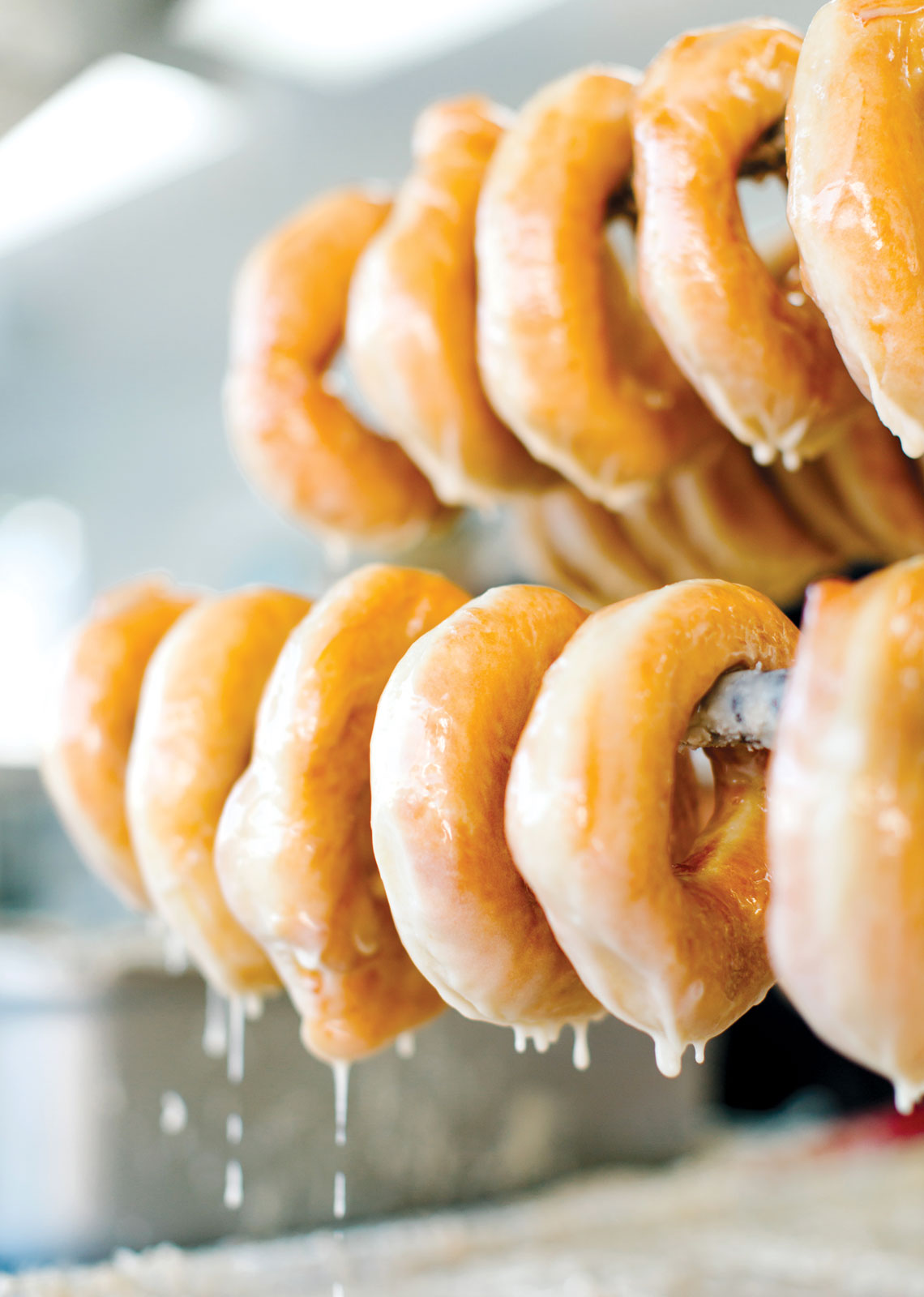 Editor’s note: Country Sweet Apple Cider is no longer at the State Fair, but Bright Branch Farm is now serving up apple treats from the cider booth.

Jouard Lingg has been making cider for nearly all of his 68 years, the third generation to work with apples since his grandpa started a farm in Michigan in the 1930s. In 1986, when Jouard’s parents were ready to retire, they passed down the family cider mill to their son and daughter-in-law, Susan, who brought it to North Carolina and set up in a log cabin at the State Fair. In the early years, Ma and Pa Lingg came to the fair to help out, and Ma Lingg brought along her recipe for hot cider spiced with cinnamon, allspice, and cloves. Although most of the original wooden mill, purchased in 1928, has been replaced with stainless steel, Jouard salvaged the elevator, which carries apples up to the hopper before they’re pressed. And the process remains the same. Crowds gather to watch Jouard turn bushels of Red and Yellow Delicious apples — plus one tarter variety, like Winesap — into gallons of small-batch cider. “When you make and serve the cider,” Susan says, “you can see the essence of the apples, and it just dances in the air.” 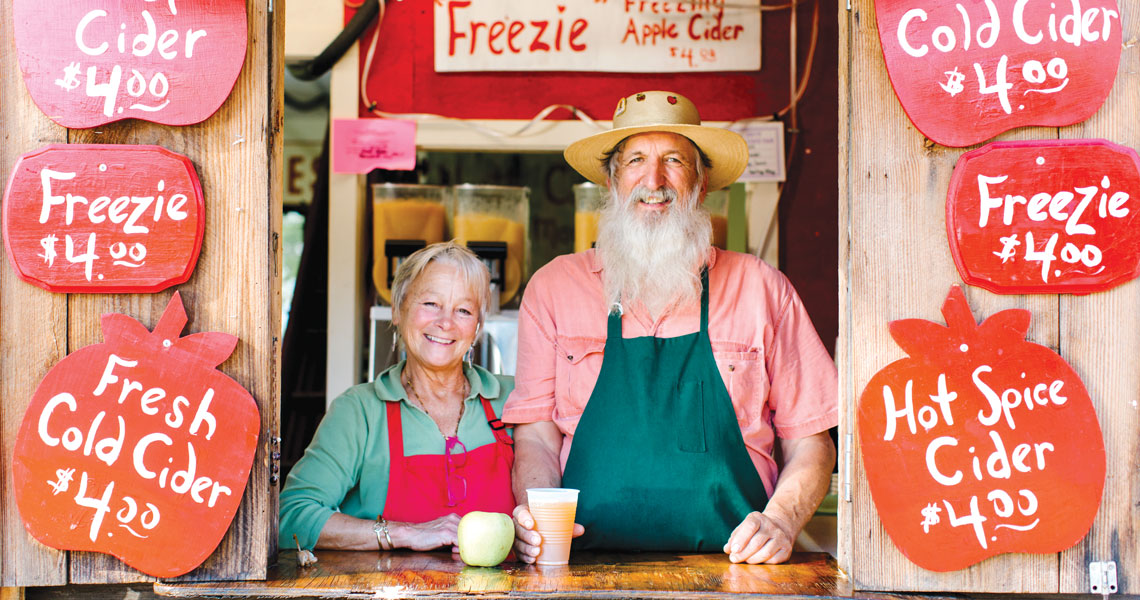 For years, hot spiced cider was a best seller for Susan and Jouard Lingg (above), but their refreshing apple freezies (below) have become a popular choice on warm October days. photograph by Anagram Photo 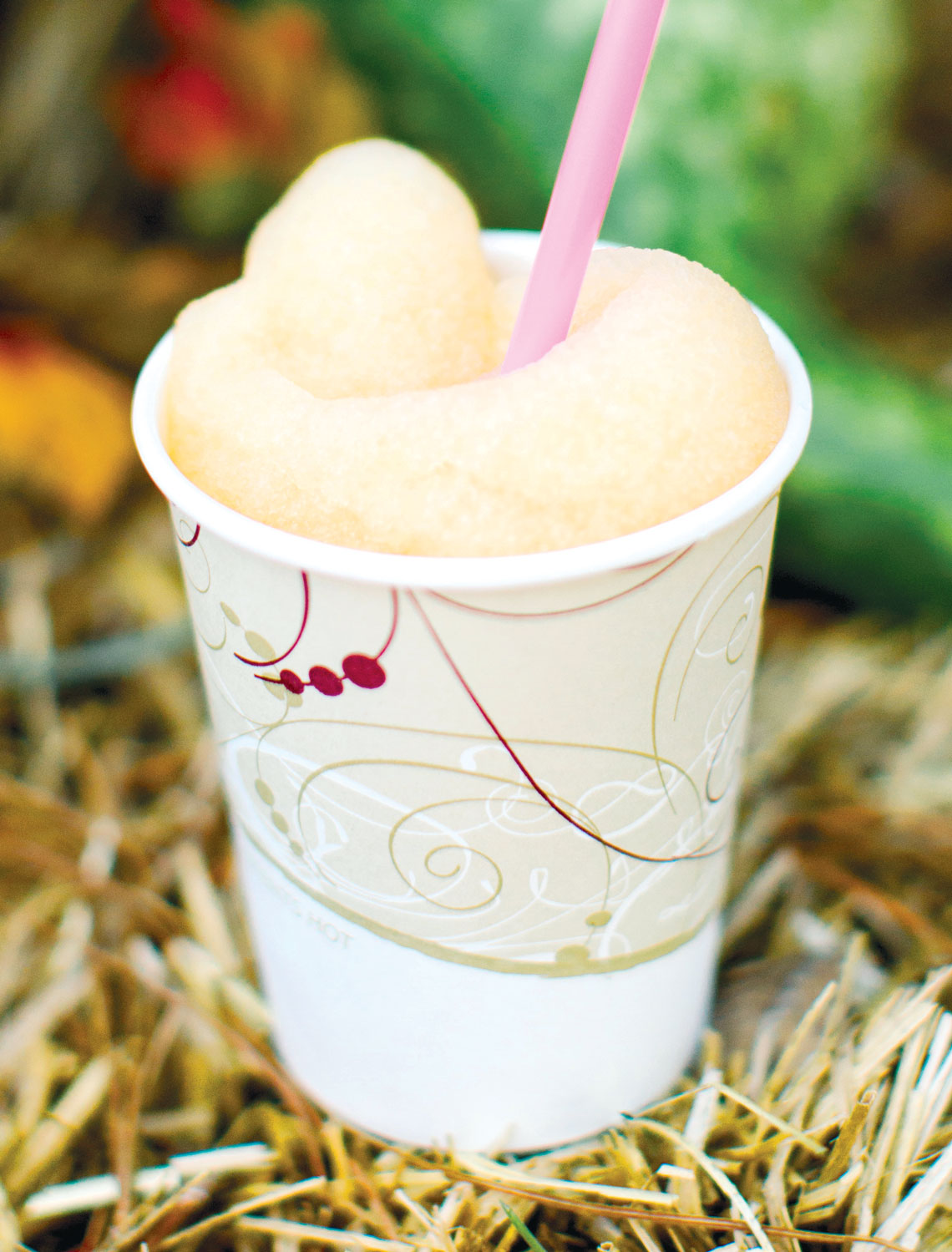