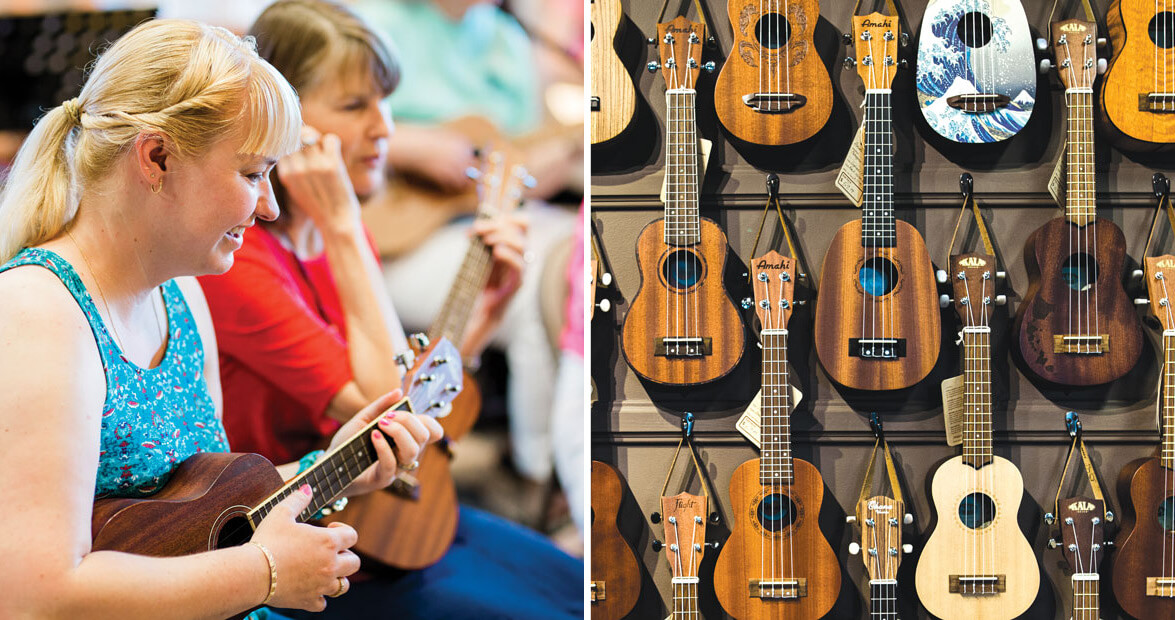 On concert day, the North Carolina Ukulele Academy in Wilmington is packed with excited students and their friends and family. The walls are filled with a rainbow of more than 300 ukuleles — red, blue, green, white; a Van Gogh’s Starry Night ukulele; banjo ukuleles — and books of sheet music ranging from Tin Pan Alley and J.S. Bach to Prince and Disney, songs that these students, ranging in age from 5 to 89, have been learning over the past several weeks.

“We’re going to start with a little student showcase,” founder Kent Knorr announces from the stage in the corner. Five kids, 5 and 6 years old, rush to the stage to perform an adorable rendition
of “Make New Friends (But Keep the Old),” with Knorr strumming along behind the scenes. Everyone gets a chance to play: The elementary school student who learned the chorus of “Yellow Submarine” gets as much applause as the adults who play James Taylor’s “Fire and Rain.”

Building a community around music is at the heart of what inspired Knorr to open the North Carolina Ukulele Academy in 2007. In addition to classes, workshops, and student showcases, the academy hosts jam sessions once a month. “It’s a strum-along, not a concert,” Knorr says. “You see a chord you know: Strum along and hang out. It’s fun!” Watching relationships develop from the jam has been an unexpected reward, Knorr says. “So many friendships have come out of that — people who probably would have never met each other.” He smiles. “I wanted to have an opportunity for folks to get together and play music.”