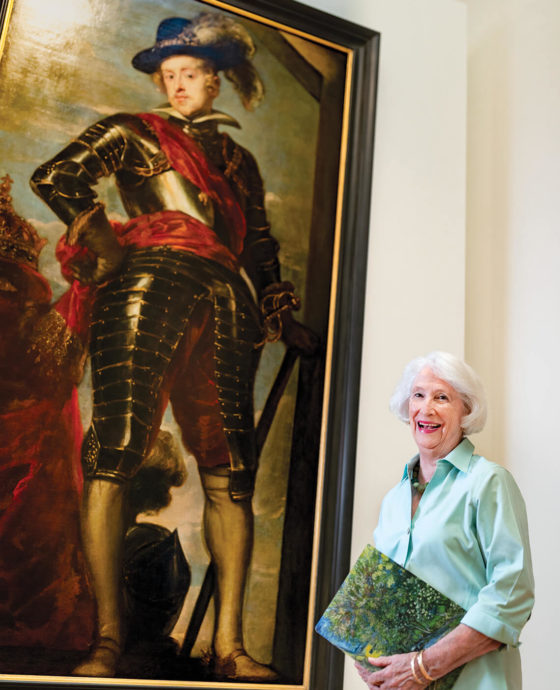 In a hushed museum gallery, a squirrelly group of Orange County third graders gathers in front of an old, fancy oil painting, circa 1715-1717. It’s a portrait of France’s Louis XV, who’s shown draped in ermine, holding a scepter, and seated on a throne. One of his small satin-clad feet rests upon a velvet cushion.

“What does this man do?” asks the docent, Mina Levin.

“How do we know he’s a king?” Hands wave in the air; the kids talk over themselves. It’s his throne, they say. It’s his clothes. It’s the way he points. Then a boy pipes up: “And look at the frame. It’s a frame for a king, too.” 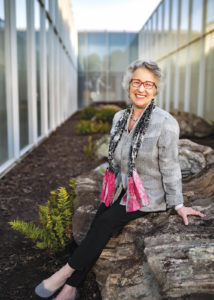 “Oh my goodness,” Levin recalls later. “I hadn’t ever really thought about it being a royal frame, but he was right, it is.”

The revelation was unexpected but not unfamiliar. The docents at the North Carolina Museum of Art (NCMA) say they often learn as much from visitors as they do from their own research. “I love touring with adults because they know what they know and they want to learn more,” Levin says. But kids are a particular treat: “They have great eyes; they ask great questions. They don’t have preconceptions about what they’re looking at.”

Enriching the lives of North Carolinians through art: It’s what the NCMA aims to do. Thanks to a volunteer team of 105 docents like Levin, as many as 30,000 people a year get an even closer look through free guided tours like the one Levin’s third graders got not long ago. These docents are upholding the legacy of a program that has made art come alive for North Carolinians and visitors from around the world since 1956. “They are the connection between the people’s collection and the people,” says Michelle Harrell, the museum’s director of education.

They are also “some of our best supporters and spokespeople,” says Museum Director Valerie Hillings. “Their wealth of knowledge about the collection and the institution are irreplaceable.” And they provide a valuable perspective on the public and how it engages with the museum, Hillings says, one that staff would not have otherwise.

The NCMA is home to the South’s largest collection of sculptures by Auguste Rodin. Some are housed in the museum’s West Building; others have been installed outdoors. photograph by VisitNC.com

Many of those visitors are schoolchildren — in fact, thousands of them come every year to the country’s first state-funded art museum, where they’re guided by a docent. For many, it’s their first time in a museum, and their first experience looking closely at a work of art. That’s also true of some of the many other visitors on any given day who enter the museum and attend a docent-led tour.
“I always remind people,” says Scotty Steele, who, with 36 years of experience, is one of the museum’s longest-serving docents, “that if you are a citizen of North Carolina, you own this artwork.”

Docent techniques and styles have evolved since the program began in the NCMA’s first home on Morgan Street in downtown Raleigh 64 years ago. Early on, docents were expected to memorize carefully scripted mini-lectures about a handful of selected works. Today, docents put in hours of research, but it’s not so they can lecture — it’s so they can discuss. Less didactic and more conversational, today’s tours are responsive to the needs and interests of various groups; today’s docents may ask as many questions as they answer. 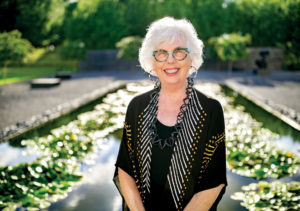 “We learn best when we’re interacting, when we’re talking and sharing with others,” says Rhonda Wilkerson, a retired UNC professor of education and a collector of African art who has been a docent for 32 years. Her goal for a tour is that people come away remarking not on how much the docent knew, but on what they saw, thought, and learned. She wants it “to become a dialogue and not a lecture. I love listening to them share what they see.”

Steele became a docent in 1984. Three years later, she became the first to hold a full-time job on top of her museum responsibilities. Some doubted it could be done. Other things were different then, too. Docents were forbidden to bring anything into the galleries with them — no notes or materials of any kind. “Now, you can bring your iPads or whatever you need,” she says. That has helped greatly as the role has evolved. “Then, it was strictly about giving out information. Now, you want your audience to respond to you, and you want to give them questions that will help them respond.”

Steele says she also regularly learns from the people on her tours. One young man recently questioned her when she mentioned that the inspiration for the museum’s sculpture of King Saul came from the Bible’s first book of Samuel. The man said he believed it was from the first book of Kings. Steele promised to investigate. She reached out to the conservator, who then emailed Curator John Coffey, who was in Israel at the time, and came back with an answer: The Bible itself had changed. What was originally referred to as First Kings had become First Samuel. The question, the answer, and the chance to better inform herself and the man on the tour are what this work is all about, she says.

This kind of high-level engagement doesn’t happen without an enormous amount of preparation. From professions as varied as medicine, law, science, engineering, education, art, and journalism, today’s docents — some retired, some not — train for a year or more to learn the museum’s collection and education techniques before giving their first tour. They continue that training every week of every year, September to May, attending required Monday morning lectures at the museum (currently held online). And they spend countless hours researching on their own time, preparing for each new tour as if for a final exam. Some, like Steele and Wilkerson, have been doing this for decades, an average of 22 tours a year — 55 minutes each — on a vast array of art, for audiences of all kinds. For a typical small exhibition, Levin says, she’ll put in 30 or 40 hours of reading to prepare for a single tour.

Being a docent is “a purpose-driven task. They really have bought into this as a life calling.”

She and her fellow docents share all of that extracurricular work with one another. Above and beyond the materials and information provided by the museum’s education department, the docents have created an independent website to organize the additional research they’ve compiled. They share tour tips and notes, travel together to see art around the world, and support one another through life experiences.

They are also dedicated to NCMA as an institution. Since 1964, the docent organization has donated 20 works to the museum’s permanent collection and funded a lecture series that has brought nationally known artists to Raleigh. Their generosity and energy are in ample supply because being a docent is “a purpose-driven task,” says Harrell, the museum’s education director. “It’s not just something they do for their résumés, or something they do in their free time. They really have bought into this as a life calling.”

A life calling is not easily laid aside. Even as the Covid-19 pandemic closed the museum’s doors for six months — and has kept tours on hold after reopening, due to social distancing protocols — the group has kept up its behind-the-scenes work.

Levin can’t wait to get back in the galleries. “You get a group of middle school girls in front of Mickalene Thomas’s Three Graces,” Levin laughs, “and they do a tableau vivant, and the teacher or one of their friends takes their photo.” She misses the give and take. On a recent tour of a group of portraits, she passed out graph paper and pencils. “As we looked at each portrait, we added a facial feature: Where’s the nose? Where do the eyes go? Where does the mouth go? I think they really enjoyed that, because I don’t think anyone realizes how difficult it is to do.” 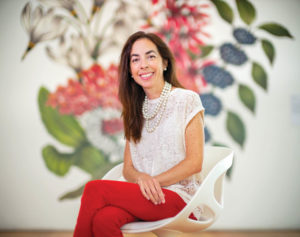 As a bilingual docent, Mónica Linares feels a special responsibility to share art with Spanish-speaking groups, and she misses her work at the museum. “It’s one of my favorite places in North Carolina, and one of my favorite places anywhere,” she says. “Even before I started [as a docent], I came all the time. It’s so inspiring, and so peaceful.” Even though she often juggles her hours at the museum with her responsibilities as a working artist and mother, Linares says that being a docent is a privilege.

“I love the training because I love to learn,” she says. When she found out that she’d be required to come to the museum for weekly lectures, it was a “beautiful surprise.” Like her fellow volunteers, Linares says an appreciation for the opportunity is at the heart of the role: “I keep learning and learning and learning. This is like going to the best college in the world. And then I get to share it.”