Nothing that Ernest Grant learned in nursing school prepared him for March 23, 1994. He was the charge nurse at the North Carolina Jaycee Burn Center when the call came in. What the staff initially thought had been a plane crash at the nearby Raleigh-Durham International Airport turned out to be a midair collision at Pope Army Airfield in Fayetteville, some 70 miles away. The burning wreckage and resulting fireball had torn through an area where more than 500 Army paratroopers were preparing for an airborne operation. Two dozen members of the 82nd Airborne Division were killed, and more than three times that number were injured in the accident, making it the worst peacetime disaster for the division since World War II.

It was the most harrowing day that Grant had experienced as a nurse. After his shift ended, he stayed to prepare the center to accept the soldiers who were coming in, taking the first admission himself. Realizing that the young man would not survive and that it was unlikely that his parents would arrive in time to be with him in his final moments, Grant remained at the patient’s bedside, talking to him and singing to him until the end came. “That was my worst moment but also a very proud moment,” Grant recalls somberly. “That’s what nursing is — to be there to help him transition from this life to the next, and to let him know that he was not alone.” 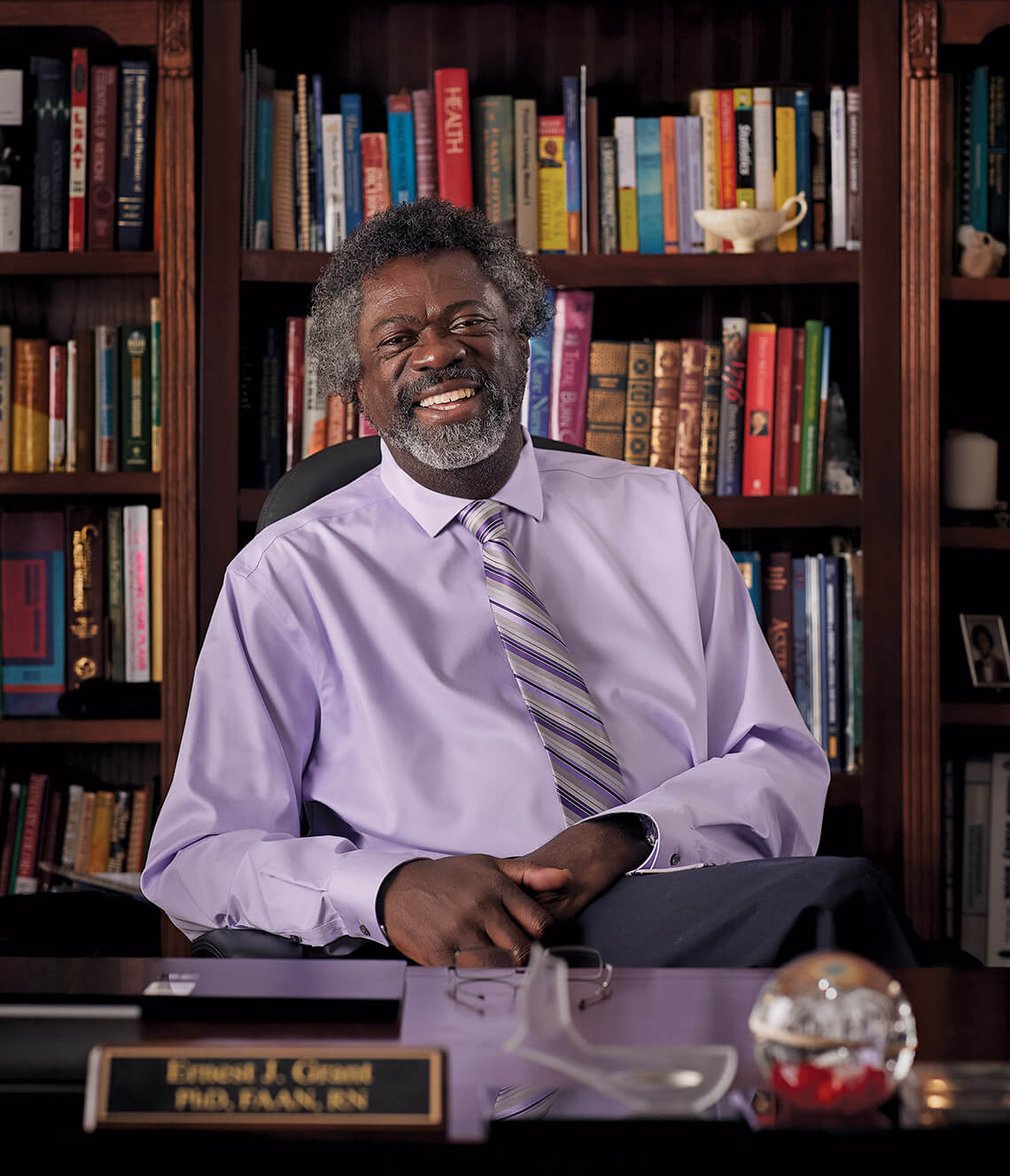 Ernest Grant is the first man to lead the American Nurses Association. photograph by Alex Boerner

Grant had learned that kind of nursing years before he began his formal training. He had seen it as a child in his hometown of Swannanoa. In this western North Carolina town between Asheville and Black Mountain, the 1960s were a time when doctors still made house calls, although seldom in the Black community, where Grant grew up. People depended on nurses and other caregivers to bridge the gap.

Annie Grant worked at the local post office, but she also did her part to deliver care to the sick and the elderly, and she sometimes took her children along to help. Ernest, her youngest son, was not taught to consider this women’s work. It was simply work that needed to be done. “You sort of developed this sense of caring and community and wanting to do what’s right,” he says, “to look after one another, care for one another.” His admiration for his mother’s work helped ignite a passion for nursing that more than four decades in the profession have not quenched. Today, the Buncombe County native and former president of the North Carolina Nurses Association — the first Black man to serve in that position — is the first man to lead the American Nurses Association (ANA), the nation’s largest nurses’ organization, in its 125-year history.

Now, in his second term as president of the ANA, Grant follows in the footsteps of nearly three dozen women before him. “Naturally, you realize that you’re under the microscope,” Grant says from his home in Chapel Hill, where wall-to-wall bookshelves have served as a backdrop for televised interviews with MSNBC and the National Press Club. “Every move is going to be looked at, criticized, and critiqued for good or bad,” he says. “I’m ready for that; I have broad shoulders.”

Grant’s statement is more than figurative. At 6 feet, 6 inches tall, he is an imposing man, although his towering frame is minimized as he sits for a Zoom teleconference, his size 15 shoes out of view. Wearing silver-rimmed glasses and a navy argyle sweater vest, Grant looks more like an adjunct professor for the School of Nursing at the University of North Carolina at Chapel Hill — a position that he still holds even after taking the helm at the ANA, which represents the country’s four million registered nurses. “Hopefully, I won’t be the first and only male or the first and only Black male to hold this position,” he says. “Hopefully, there will be plenty more coming after me, to where it’s not a novelty.”

At 62, Grant is no stranger to being a pathfinder in nursing, a career dominated by women since before Florence Nightingale. Today, men make up about 9 to 12 percent of nurses; when Grant entered nursing school in the 1970s, the number was less than 3 percent.

His sister Elizabeth Hardine had expected that her baby brother, a gifted pianist, might consider a career in music. Grant still substitutes on piano or organ at Raleigh’s St. John’s Metropolitan Community Church, where he was also once a member of an award-winning choir, and he dutifully practices piano each week in keeping with a promise he made to his longtime piano teacher, Mary Davis. But a career in health care is what struck a chord.

“I don’t know how he copes with all the things he sees. Sometimes I wonder, ‘How does Ernest handle all that?’”

At first, Grant wanted to become an anesthesiologist, an ambition that his high school counselor feared was unrealistic. He was 5 years old when his father died, leaving his mother to raise seven children. While there might have been a handful of scholarships available to low-income students, those endowments were not likely to provide enough to send Grant to a university. His adviser suggested the teen begin in the licensed practical nurse program at what was then Asheville-Buncombe Technical Institute. The plan would allow him to train quickly and then work his way through school. “Six weeks into that course,” he recalls, “I forgot all about med school and realized that nursing was my calling, and I never looked back.”

Having graduated from high school early, Grant had to wait five months before he was old enough to take the licensing exam. At 18, he landed his first nursing job at Asheville’s Mission Hospital. Five years later, he moved to Durham to study at North Carolina Central University to become a registered nurse. To support himself while earning his undergraduate degree, Grant took a job at the North Carolina Jaycee Burn Center, which had opened a year earlier at NC Memorial Hospital in Chapel Hill. In Swannanoa, he had served as a volunteer firefighter and a member of the Jaycees, but he chose the burn center because it was one of the few intensive care units in the area that was hiring LPNs. “I figured I’ll go there and work a couple of years until I finish my degree and then move back up to the mountains,” Grant says. “Again, probably six months into working at the burn center, I realized this was my calling. This is where I wanted to make my mark in nursing.”

Burn nursing, which last year received formal recognition from the ANA as a nursing specialty, is intensive caregiving. Burn care nurses work with patients who are in immense pain and require near-constant care from staff members who must attend to both physical and emotional scars. “I don’t know how he copes with all the things he sees,” Grant’s sister says. “Sometimes I wonder, ‘How does Ernest handle all that?’ ”

Grant acknowledges the heartache that comes from seeing how an incident of no more than a few seconds can bring permanent changes to a person’s life. “A burn is something I wouldn’t wish on my worst enemy,” he says. “I realized at the beginning [that] I was going to work to inflict pain on someone, that it was a necessary part for them to get better. But in the end, you develop this friendship and relationship with them.”

During a span of 27 days in 1986, Grant bonded with then-27-year-old patient Lou Protonentis, who was hospitalized with second- and third-degree burns over 70 percent of his body. Nurses dressed the young man’s seared skin in bandages stretching from his neck to his toes. “Any slight movement was excruciatingly painful,” Protonentis remembers today. “At literally the worst time in my life, I opened my eyes and Ernie was there.” The former karate fighter stifles tears as he recalls his first encounters with Grant, now a friend of more than 30 years. “If you would ever meet him, you would see this giant gentleness,” Protonentis says, adding that Grant pushed him more than pampered him. “He went to war with me for my survival and my life, and he did it in a way that was appropriate for what I needed.”

Grant’s former coworker Anita Fields recalls that he seemed to instinctively know how to give his patients a lift. “He kind of would make patients forget that they were suffering,” she says. “Any patient that had Ernie for a nurse was going to have a good day.”

“At literally the worst time in my life, I opened my eyes and Ernie was there.”

Despite his memorable bedside manner, Grant found himself drawn to the educational side of his profession. When both he and Fields applied for a position in outreach and prevention, she told the interviewer that Grant was better suited for the job, which occasionally required him to dress as Sparky the Fire Dog. Grant wore the costume of the familiar Dalmatian, which serves as the official mascot of the National Fire Protection Association, for elementary school programs throughout the Triangle area, and later led burn prevention and education courses internationally.

Grant’s new role took him away from direct patient care, although he returned to bedside care in 2001, when he spent his vacation relieving burn nurses in New York City following the September 11 terrorist attacks. In 2002, Grant received the Nurse of the Year Award from President George W. Bush. That honor, along with the American Burn Association’s Burn Prevention Award, is among dozens of plaques and certificates covering a side of his office that Grant chooses not to show during most interviews. The wall includes a reminder of what Grant considers his best day in nursing: May 8, 2015, the day he earned the title “doctor” from the University of North Carolina at Greensboro, becoming the first Black man in the history of the School of Nursing to earn a PhD.

“Every time I went back to get another degree, from being an LPN to getting the bachelor’s to getting the master’s to getting the doctorate, I saw that as one step to being able to advocate for the patients that I would care for and for the public’s health in general,” he says. “To me, there’s nothing better than being able to interact with people when they’re at their most vulnerable, being a calming voice, giving them reassurance, and letting them know you’re there on their behalf.”