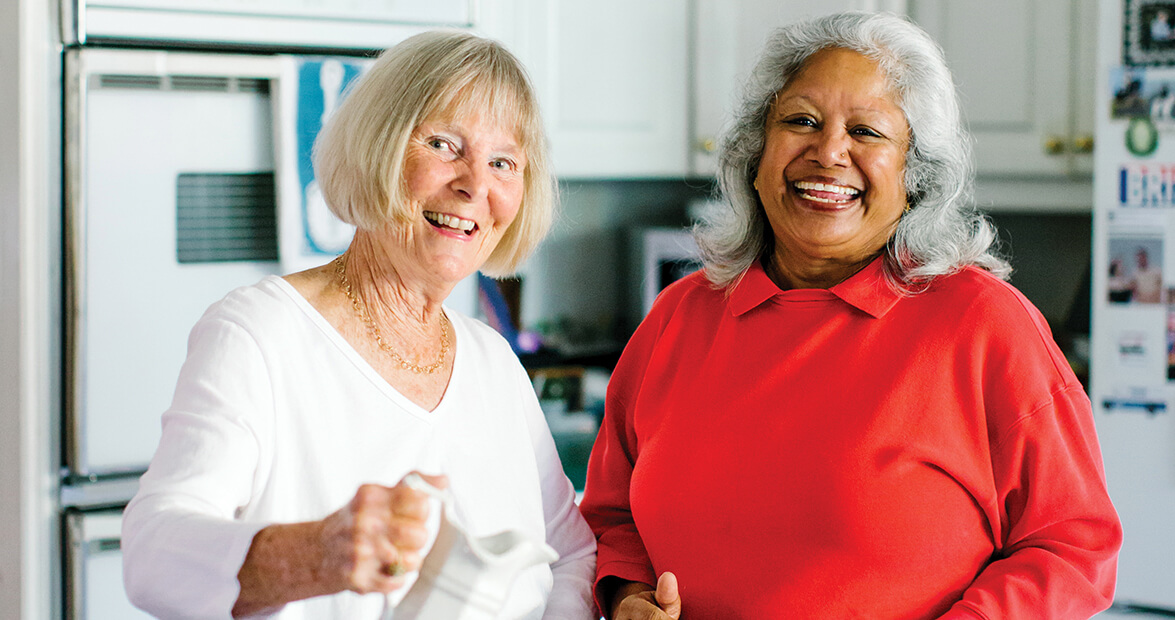 A few years ago, a fierce tropical storm threatened to veer off course and head inland. Pulling up boats and securing dock chairs is for coastal dwellers, not Piedmont folks, but this particular storm got lusty for red clay and shifted west. Wide-eyed, my parents and their neighbors peered into their Raleigh backyards to find majestic oaks teetering in the soaked ground, dangerously close to the power lines.

Naturally, my mother was concerned for the safety of everyone. “But I was worried about the fruitcake,” she told me later. “At any given time, I’ve got fruitcake in just about every refrigerator in the house.” That’s because fruitcake, according to my mother (and her grandmother before that), is best after it’s seasoned — aged for a month, a year, even more. This is funny, not just because the words “best” and “fruitcake” aren’t often allowed to couple up, but also because it introduces the idea that some baked goods improve with age.

“Of course,” she adds, “you have to re-brandy it every now and then, or the cheesecloth will dry out.” This from a woman who grew up in a family of committed teetotalers.

My mother — Annie to everyone else — has her own lexicon that plays a part in all the rituals of generosity that govern her year. She is a woman of abundance. Not things, mind you, but ideas, curiosity, family — festivity. Her calendar is a marvel of traditions that cheerfully stare down the passage of time by celebrating it: the May Day nosegays placed anonymously at each neighbor’s door; the Thanksgiving journal that documents every dish and guest since 1971; the Groundhog Day dinners that feature root vegetables and ginger ale to honor winter’s retreat. On Christmas Eve, the Yule log is lit, the Spode china comes out, and we dig our forks into thick slices of Aunt Bonnie’s coconut cake. At this moment, my mother unveils her fruitcake. Supposedly, the recipe has been enjoyed by family for more than a hundred years. But, because it’s fruitcake, not enough people have actually eaten it to form memories as proof.

Fruitcake happens in November, on a day with just enough crispness in the air — a detail inspired by the short story “A Christmas Memory” by Truman Capote. “I write to Guna,” Annie explains, “and I say, ‘It’s fruitcake weather!’ ” Guna is her fruitcake friend; in a world of fruitcake-haters, these people need to stick together. 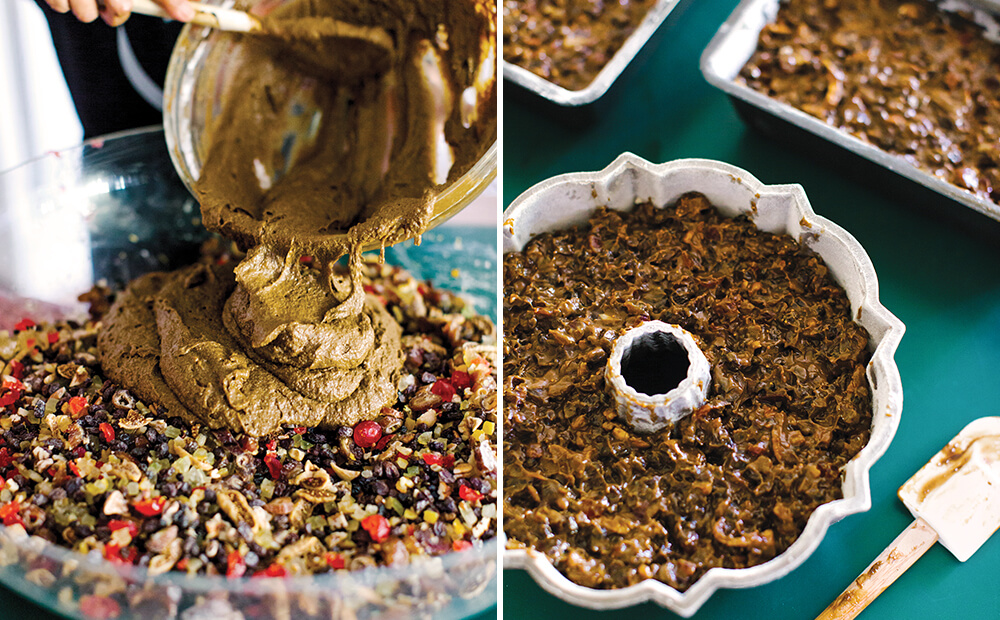 Ten kinds of fruit and two types of nuts are chopped for the batter. To find a bowl large enough to hold all of the ingredients, Annie went to a restaurant supply store. The plastic bowl she now uses was intended for ice and drinks. photograph by Anna Routh Barzin

When Annie was 16, she inherited the family recipe from her great-grandmother Field. This fruitcake bears no resemblance to those store-bought bricks tossed around as holiday gag gifts. It’s dark, rich, and moist — a temptress of a cake, soaked in brandy. A kind of Bohemian fruitcake cousin that, once the refrigerator door is shut, whispers dares to the milk, suggests naughty games to the celery. It’s delicious.

It’s also a bit spoiled and needy, demanding an enormous amount of attention, ingredients, and family participation. For years, my grandfather drove over the mountains from Virginia to help on fruitcake-making day. Together, he and my mother would whistle down the aisles of the local ABC store, relying on advice from the cashier, who was the only one among them who knew what brandy should taste like. Then, they’d head to the grocery store for dates, molasses, candied fruit, and whatever else went into the dark batter.

They baked one loaf and one large Bundt, which was sliced for family on Christmas Eve. The smaller loaf was for tasting and sharing at other times.

Periodically, Mom would nibble a piece to check brandy levels. We chuckled at her dedication to this demanding taskmaster of a dessert that only a few people would eat. At some point it occurred to us that she might have developed a taste for brandy.

Whatever remained after Christmas Eve was squirreled away in the refrigerator (or multiple refrigerators) and brought out for special occasions. But even then, it was served only to those who asked for it. If you waffled over whether you liked fruitcake, you needn’t bother asking. At some point, Annie took to labeling slices — to keep the years apart. A piece of my great-great-grandmother’s fruitcake might very well be living in the basement fridge, bragging about the good ole days when it was baked, back when fruitcake had to walk six miles to school in the snow.

My grandfather finally got too old to help, and for several years the fruitcake didn’t get made. I was in my early 20s then, living in Hawaii, relishing my youth and taking pleasure in adventures that broke traditions, instead of honoring them. Meanwhile, back home on Wilson Lane, a steady stream of family and friends kept things lively. More and more, my mom mentioned the name of a new friend, Guna.

Guna’s parents are Indian, but she grew up in Singapore and moved to Raleigh, where she became a chef by trade. Her dark, waist-length hair, winking smile, and ability to read palms made her something of an enchantress even beyond the kitchen. Everyone loved Guna. My mother was over the moon when she found out that Guna had grown up making fruitcake with her mother — fruitcake that turned out to be strikingly similar to Great-Grandmother Field’s recipe. An alliance quickly formed, and fruitcake was back on the calendar.

But for once, the recipe had skipped a generation: It wasn’t a Field great-great-grandchild baking it, but someone new, someone who understood it more deeply, appreciated it more fully. Someone who was there.

My Hawaii years turned into a New York City phase, which was followed by time in Turkey. As often as possible, I visited Wilson Lane, and each time I left, I felt sated by my parents’ familiar traditions and kindnesses. When the Turkish man who later became my husband first met my mother, he used one word to describe her: cömertli, meaning generous. Naturally, I assumed I’d inherited this gene, too. But that was before I found out I was no longer in the fruitcake loop.

In my long absence, baking fruitcake with Guna had taken off like a hurricane over warm seas. Guna was fun in the kitchen, told great stories, and she knew which brandy to buy. No longer an arduous task, fruitcake day had become a fit of sticky fruit and giggles with Guna. They made more than two cakes, but still only for family; Guna would send hers to Singapore. Annie even entered one of their loaves in the North Carolina State Fair and won a blue ribbon, proving once again that the words “best” and “fruitcake” can get along pretty well.

For years, I watched this fruitcake event from the sidelines, feeling a little peevish, I’ll admit, at being on the outside. By then I was a mother of two, living 25 minutes from Wilson Lane, and I knew I was being ridiculous. Still, sharing something that I’d always taken for granted as my own — the family fruitcake — brought on little twinges of an ungenerous feeling: not jealousy, exactly. Regret? Yes, and longing, too.

Around fruitcake-making time, I would start to bake. Right before Thanksgiving, my cozy kitchen would transform into an assembly-line bakery as I turned out pan after pan of hot, sticky cinnamon rolls for everyone I wanted to thank: my sons’ teachers, friends, the mail carrier, sanitation workers, my parents. It was my own ritual and it was satisfying, but it still wasn’t like what my mother and Guna shared when they made fruitcake.

I finally got up the nerve to ask my mom if I could join them on fruitcake day. “We would love for you to come!” she texted back. “We keep hoping you’ll join us.” Clearly, they’d never felt proprietary over the fruitcake. My sense of accomplishment at having overcome a decades-long pout was quickly replaced by the realization that I’d missed a lot of fun.

Somewhere at its root, the definition of tradition includes the word “surrender.” That seems right to me. A ritual becomes a tradition only when it’s given up to the next in line — whoever that may be. The fruitcake was never my tradition, so it was never really mine to surrender, I guess. Still, some part of me stubbornly clung to the idea that it could be mine — until the day I actually made it.

When I arrived in my mother’s kitchen on fruitcake day, Guna welcomed me with a huge hug. I was awed by the size of the bowl, and I never knew that candied fruit — in all its otherworldly hues — was so hard to chop. My dad once passed through the kitchen on fruitcake day and swore he saw the green citron move. He and I later wondered if the brandy is what makes the cake safe to eat after months or years.

I asked Mom if she’d consider using organic fruits next year. From across the kitchen Guna raised her eyes to mine and nodded sympathetically. But Mom quickly dismissed the idea as an unspeakable affront to their fruitcake tradition. We are alike in this way: It may take her some time to surrender, too. 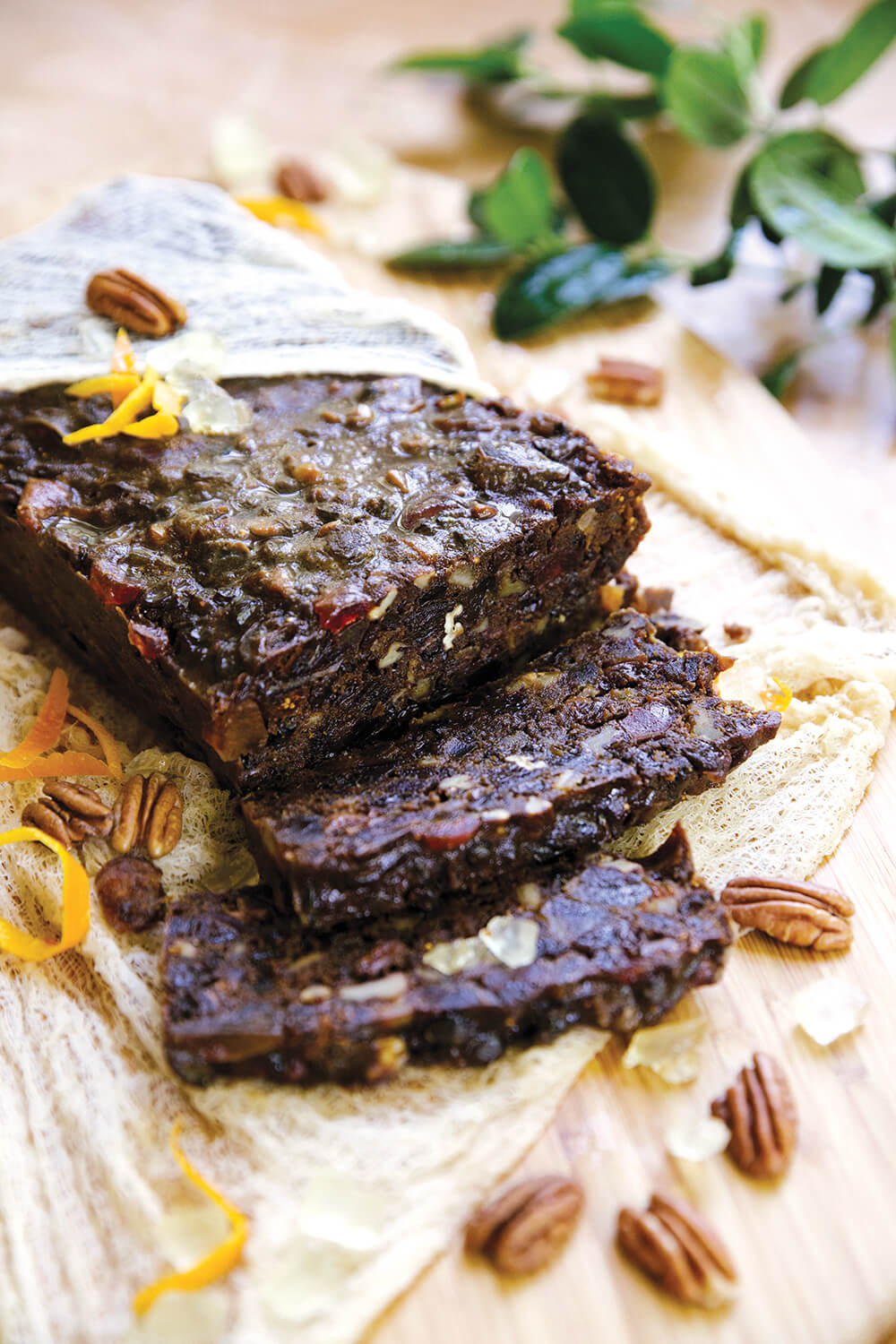 In a medium bowl, mix 4 cups flour and all spices, and set aside. In a very large bowl, add ½ cup flour to all chopped fruit and nuts. Stir to coat. Set aside.

In another medium bowl, cream butter and brown sugar for 5 minutes. Add molasses. Beat in the eggs, two at a time. Be careful not to overbeat. Add vanilla, juice, and baking soda solution. Stir well.

Add the flour mixture to the wet ingredients, and stir until the batter is thick and smooth. Scrape the batter into the very large bowl of fruits and nuts. Use your hands to mix it well.

Fill all the pans ⅔ full and place them in a preheated oven. Bake loaves and Bundt for 2½ to 4 hours. Test doneness with a toothpick.

Let cakes cool in pans overnight. In the morning, remove cakes and soak the cheesecloth in brandy. Note: This will take almost a fifth of brandy. Wrap the cakes in the brandy-soaked cheesecloth, then wrap the bundles in aluminum foil. Refrigerate and check moisture level after two weeks. If cheesecloth is dry, re-brandy as needed.