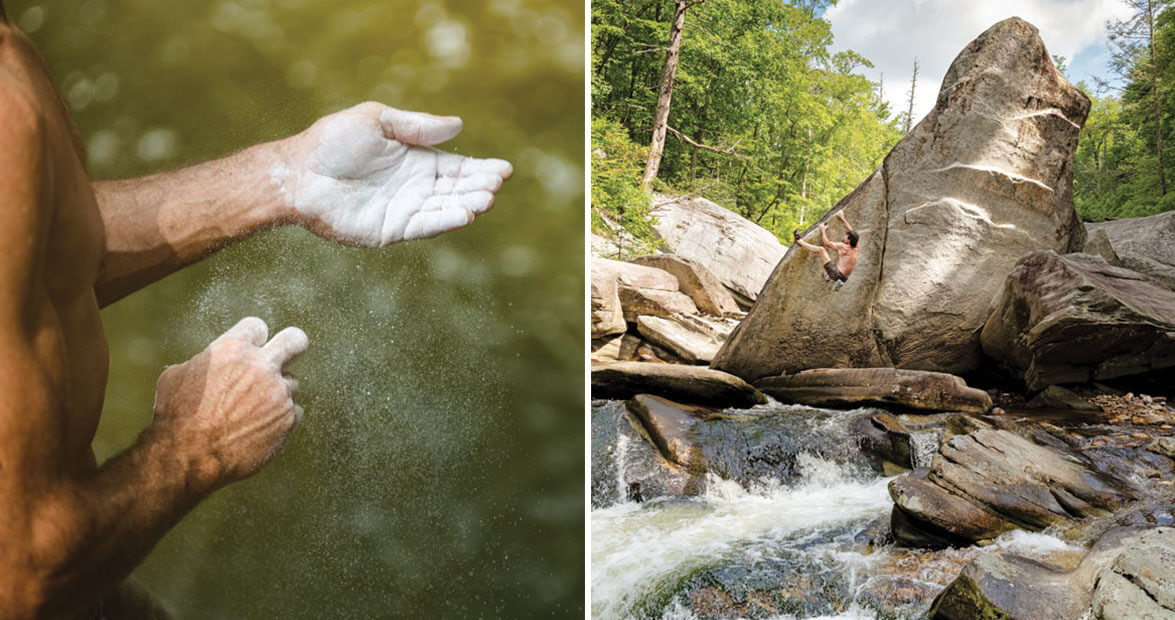 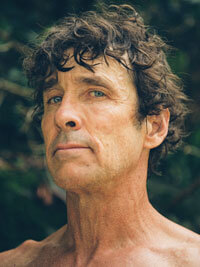 Joey Henson cannot keep his eyes on the road. They’re scanning the mountains along NC Highway 105, searching for stone. Trees are beginning to bloom the varied greens of spring, but it’s still possible to see clear through to the good earth. There, on a far mountainside, he can just make out the contours of a boulder.

Henson, one of the most seasoned and storied climbers in Appalachia, is always on the lookout for new rocks. Only one in 100 in this area is right for ascending. Most are too sharp for bare fingertips. Many don’t have the right concentration of hand- and footholds. And even when he thinks a far-off bit of geology is a boulder fit for climbing, he has to secure permission from private landowners — not always an easy feat.

Today, he’s headed for a place where he knows he’ll be welcome. It’s a sort of Shangri-la for climbers, one of the largest places to climb in the High Country where access is reliable: the Linville Gorge Wilderness, a federally protected area that’s sometimes referred to as the Grand Canyon of the East.

Blacktop road turns to gravel. Henson and his climbing buddy, Richie Hum, park and begin the long hike down. The day is unexpectedly warm. When they reach the bottom of the gorge, there’s a switchback turn in the forested trail. Immediately, the temperature changes. Gone is the warmth of organic matter; cool is the breath coming from the Linville River. The boulder field at the foot of Spence Ridge is part of a three-mile concentration of stones, many of them shaped just right for human skin to make contact.

The men pull out bars of gymnastic chalk to absorb the sweat on their hands. When they clap to release excess powder, it looks like tiny universes are exploding in their palms. Henson grabs on to the closest boulder to start his warm-up: His left hand reaching. His right hand holding. A fissure in stone that seems too small to hold him proves itself able to carry his weight. 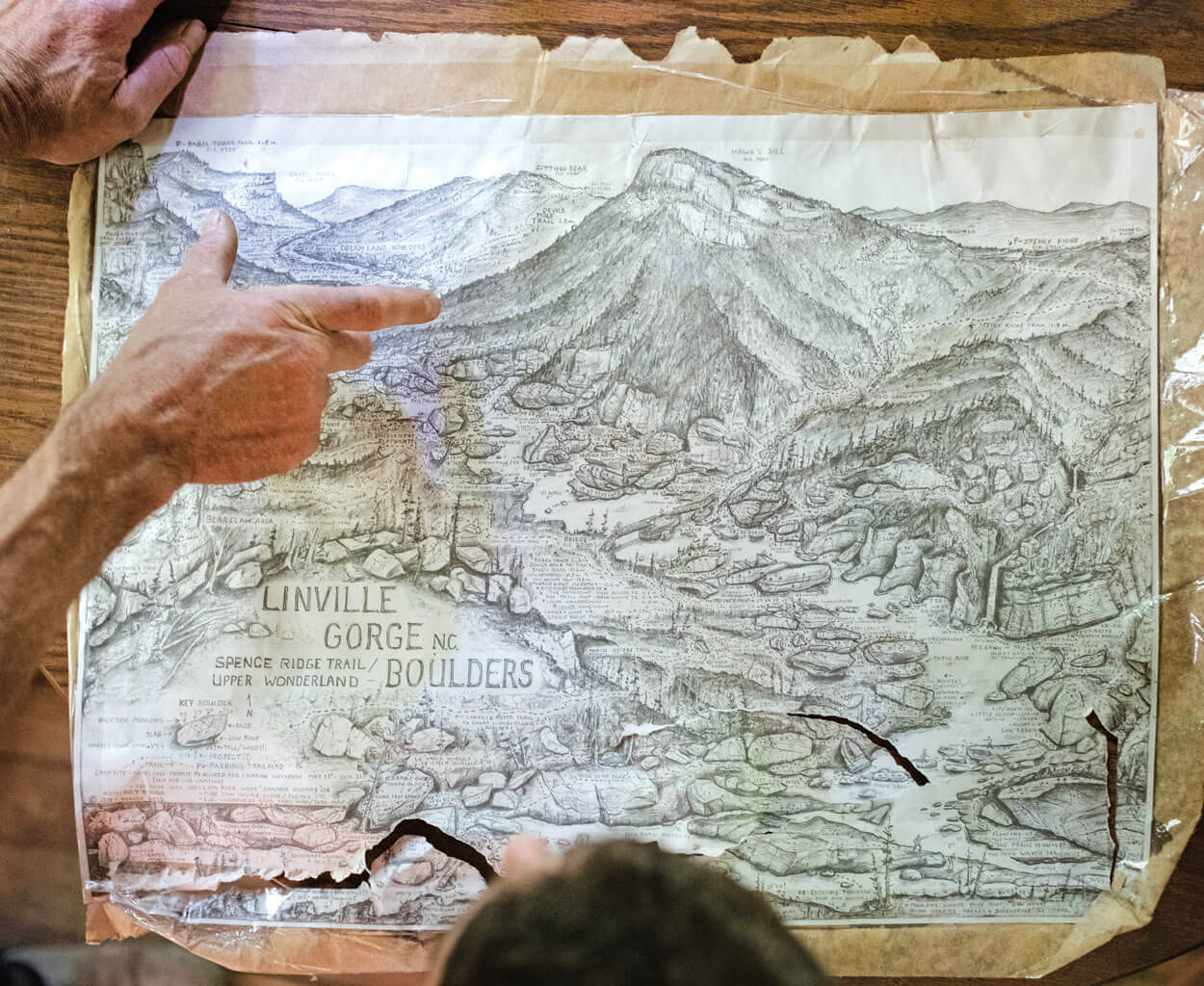 Henson penned a map to the gorge’s bouldering routes. photograph by Andrew Kornylak

Humans might have been exploring Linville Gorge for millennia, but modern climbing began, in earnest, during the 1940s, when men like Jim Anthony made first ascents of cliff faces using primitive equipment. In the 1950s, Special Forces trained there, and in the 1960s, the Outward Bound School opened at the gorge, ushering in a surge of rope climbers and a legacy that still resonates.

He is purposely putting himself between a rock and a hard place.

In the 1980s, Henson enrolled in a climbing class at Appalachian State University. He enjoyed it so much, he took it twice. The established climbing community tried to get him on rope, but he always went back to a low-lying form of training known as bouldering, which is what he practices today. Bouldering takes place fairly close to the ground and doesn’t require ropes for safety, just folding mats known as crash pads. It began as a way for athletes to train when they were not hooked into high-reaching safety gear. But around the time Henson discovered it, bouldering was transforming from a training technique into a main event. And it’s only gotten more popular since. Thanks, in part, to climbing gyms that offer indoor, ropes-free courses, bouldering has turned into arguably the most popular form of climbing in the country. The route used to ascend a boulder is called a problem, and the first person to travel it to completion gets to name it — if it’s worthy of climbing again.

Henson points to a section of rock, a problem known as “Bull in a China Shop.” This is one of the many boulder problems he’s named. Actually, a fellow climber, Lisa Hummel, came up with the idea. She was there the first time Henson topped the boulder, claiming first ascent. After watching his tall frame rise via the stone’s delicate features, she told him that it was like seeing a bull in a china shop. The perfect image. “Climbing,” Henson says, “has an element of oral tradition.”

As he coats his hands in chalk, he confesses, “I don’t leap like I used to. As I’ve gotten older, I want to find the way a small person would finesse. They use the mind, little moves.” He wants to revisit each problem, approaching it gently, with more nuanced curiosity and creativity. These are the same qualities that he brings, as an artist, to his pen-and-ink maps of boulder fields, which can be found in climbing gyms and living rooms around the country. His map of Linville Gorge includes a problem called “A Good Day’s Work.” Its first ascent is credited to Mike Stam, another early boulderer.

Today, Richie Hum will climb it.

His fingers disappear into slits, and one of his climbing shoes — which resemble rugged ballet slippers — hooks a crevice. He leaves touches of chalk in his wake, forming a constellation that will disappear in the next rain. Hum is nearly upside down when he falls, landing on his feet. Within minutes, he’s back at it.

Just a few feet away, the Linville River rages, but it’s no distraction as Henson begins his own ascent of “A Good Day’s Work.” He is a man purposely putting himself between a rock and a hard place in a raw, untamed space. And he has evolved from a bull in a china shop into a creature more akin to a fox, dancing through a showroom of breakable things. He rises, finger and toe to stone, over and over, until he reaches the top.

“Nice job,” Hum shouts as he disappears into the brush above.

After Henson finishes the problem, he admits, “When you get to the top, it’s almost a letdown. That journey’s over. What now? But you know the answer: You keep going. You find the next challenge. And then you overcome it.” 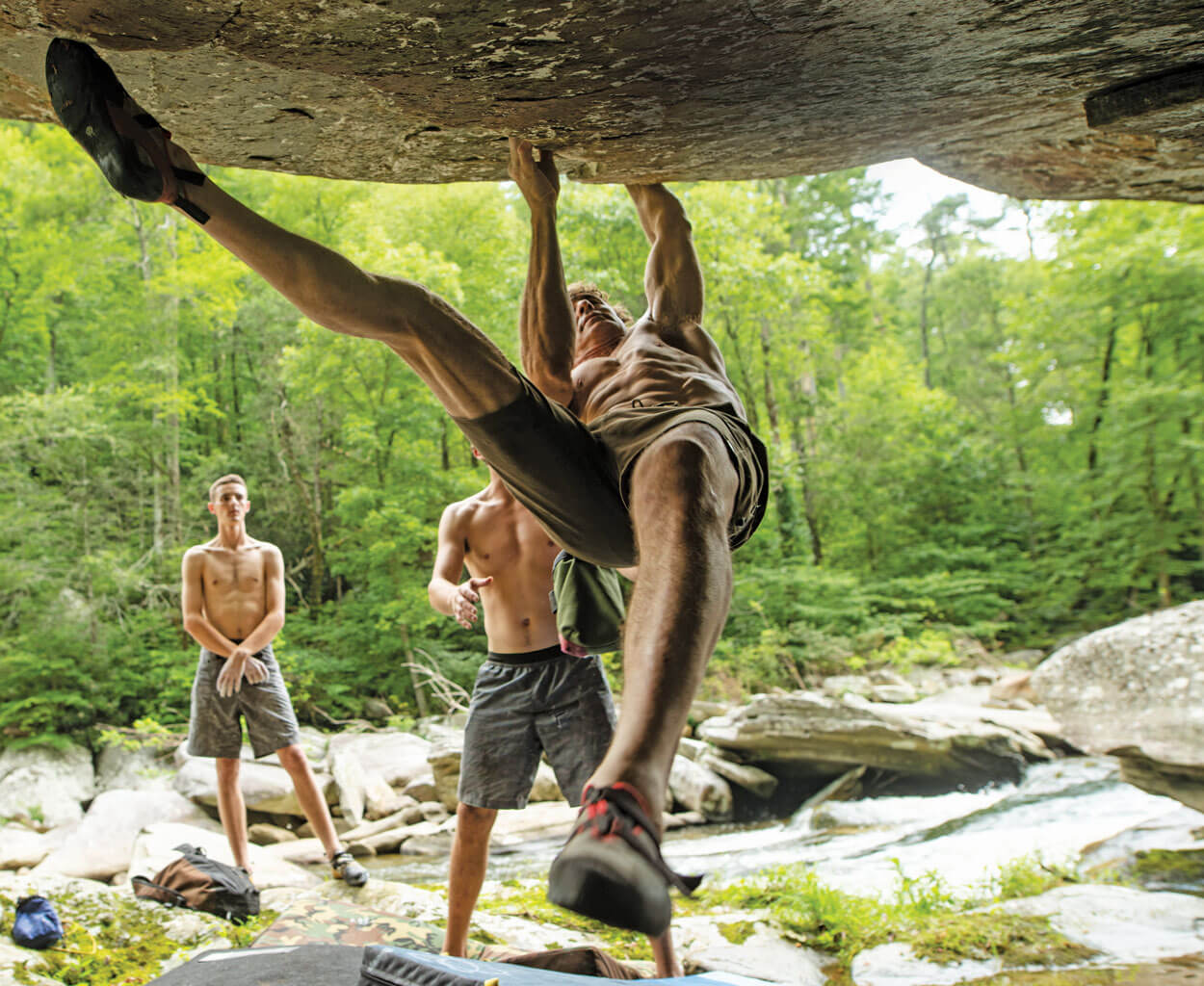 The climbers have packed a picnic. Hum sets about making sandwiches while Henson arranges crash pads. “They’re not just for safety,” he says. “They also make great benches.”

For Henson, hospitality comes naturally. If you live in the High Country and make friends with climbers, it’s likely that you’ll end up at his Boone-area house, otherwise known as The Barn. Though Henson is decidedly local — with ancestors tracing back to the High Country’s pioneer days — his influence is international. He’s hosted European climbing groups and famous mountaineers. He’s known, in fact, as a bouldering pioneer, one of the scene’s patriarchs. And The Barn, like Henson, is legendary in climbing culture. But for him, it’s simply home. Just like the gorge. All told, he’s probably spent a full year of his life by the Linville River.

“A stable ecosystem is what gives humans confidence and support. It’s what enables us, as a species, to advance.”

Sitting cross-legged on his crash pad, he uses the contour of a boulder as a backrest. “The walls of the gorge aren’t just physical; they’re psychological,” he says. “You don’t get phone service. When you’re here, you’re living the way humans used to live. You start wondering what it was like here then. Aspects of our forests are slipping away. We should have wolves watching us right now. We should have been worried about cougars on our way into the gorge. There should be more bears and otters running around. There should be more of everything.”

Hum, a biologist by trade, plays along. “There should be belted kingfishers perched every 100 yards,” he says. “Swarms of bees.”

“So many passenger pigeons that they block out the sun!” Henson says.

Deer cannot move down the steepest slopes. So flora grow without their grazing. Trees toward the bottom of the gorge are old growth, survivors because their home has always been too severe for logging. Even today, there is no road to the bottom of the gorge. Every creature who descends to the river has to reach it the same way, by stretching their limbs — and, often, their limits. “Hiking,” Henson says, “is like training for climbing.”

He reaches out to a nearby boulder, and fits his large palm around a knob of stone the way one might cup the elbow of a loved one to steady them. “This is metamorphic sandstone,” he says. “It has fine grain and rounded features. It forms to your hand. Humans are built for climbing this.”

Hum grew up in an urban area, where most climbing took place indoors. “Gyms can get boring,” he says, “but climbing in the gorge is an entire ecosystem experience.”

Henson closes his eyes and leans his head back. A stone fly with veined wings lands on his knee. He doesn’t flinch. In this cool sandstone alcove, even if a storm were to come, Henson would be sheltered. “A stable ecosystem and environment is what gives humans confidence and support,” he says. “It’s what enables us, as a species, to advance. That’s the way it’s always been.” 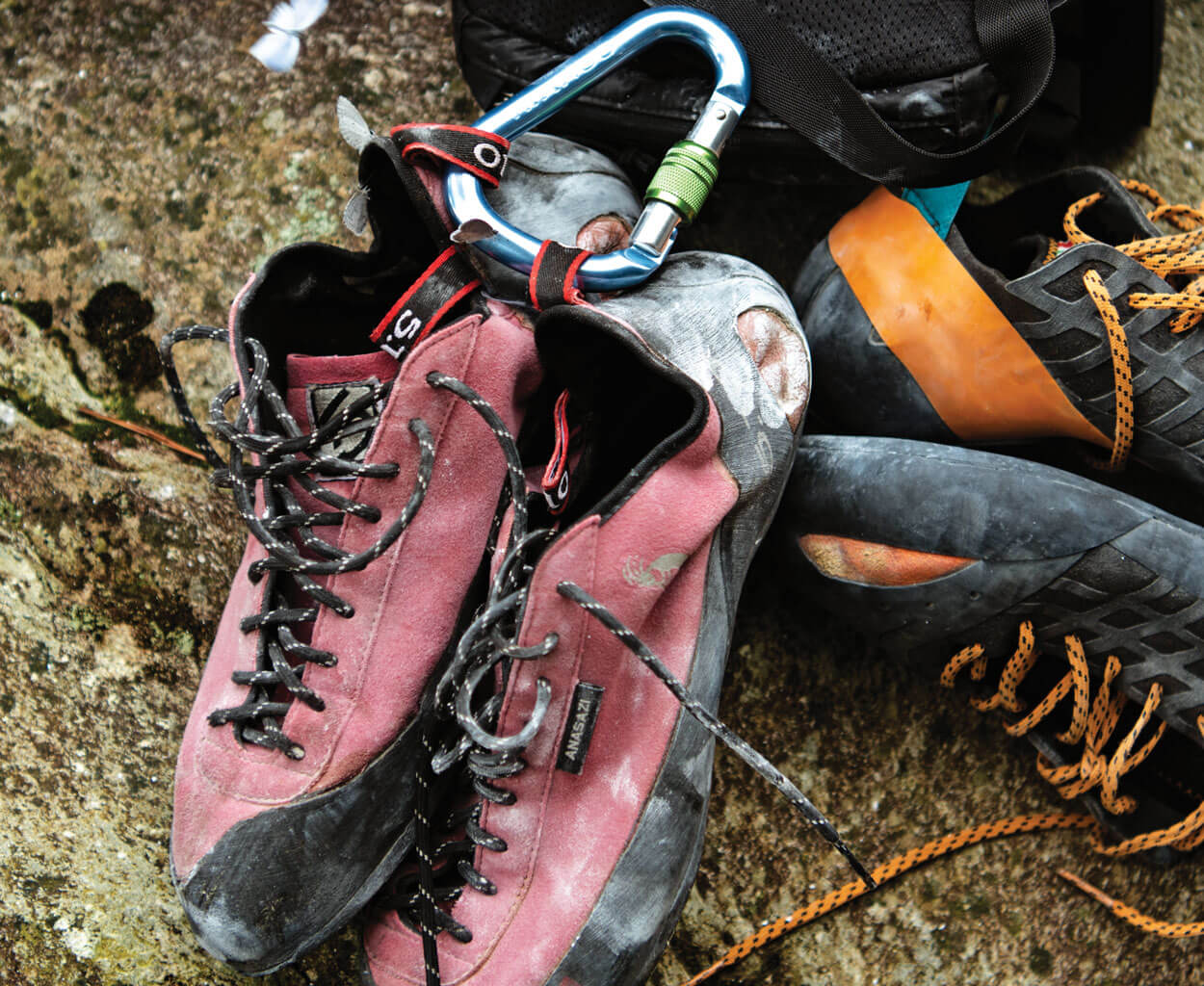 A holly azure butterfly flutters around a pair of chalk-blotched climbing shoes. The shoes are equipped with a rubber outsole designed to provide a solid grip at any angle on a rock. photograph by Andrew Kornylak

The gorge — nearly as unaltered as a modern landscape can be — is a reminder of what’s at stake in the region, environmentally. It’s also an illustration of how glorious it can be for climbers to have stone-solid access to their quarry.

Over the years, it has burrowed into Henson’s mind that the spirit of conservation that protected the gorge — via funds from John D. Rockefeller in 1952, a move that parlayed into its designation as a federal wilderness area in 1964 — might be applied to smaller tracts of land today. “If it weren’t for climbing, I wouldn’t understand the way all these things fit together,” he says. “I’m interested in how landscapes can be protected for climbing and how climbing can protect landscapes.”

When development threatened a beloved boulder field behind The Barn a few years ago, he turned to the Carolina Climbers Coalition to secure the property with purchases and easements. The 55-acre project ensures that more than 100 previously unprotected boulders will be accessible to the people who know and love them best.

With Henson’s help, boulder problems have delivered some unexpected ecological solutions. “That’s 55 acres of watershed,” Henson says, noting that clean boulder-field creeks lead to rivers that hydrate. That stone turns to soil that feeds the plants that nourish humans. Each hike in, each climb up, reinforces the importance of these elemental connections. “Historically, there was talk about damming the Linville River,” he points out. “If that had happened, this wouldn’t exist. It’s a world-class resource, and some people don’t see its value at all. Is it the greatest thing ever, or is it just a bunch of rocks? To me, wilderness is everything that makes life worth living. Success isn’t having a white picket fence. It’s having access to places like this.”