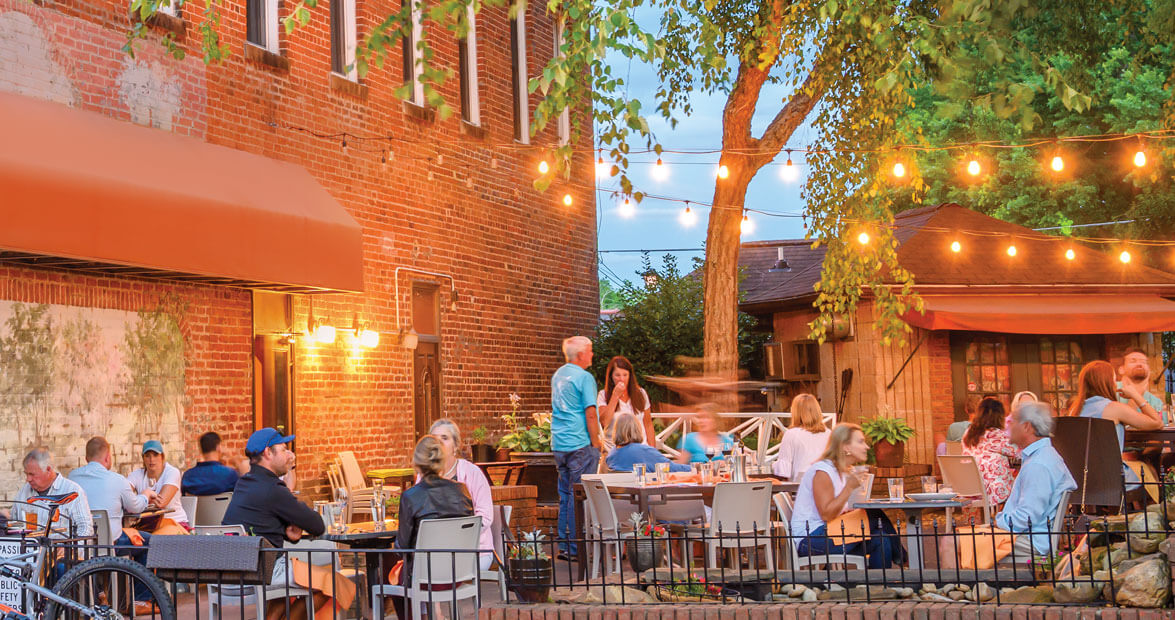 Lawson Callahan glances up at the clock and furrows his brow. It’s 9 a.m. at Pat’s Snack Bar in downtown Morganton, and he’s wondering where Phillip is. “I’m surprised he hasn’t been in yet,” Lawson says. The 69-year-old restaurant owner is standing in front of the grill where he’s been fixing egg sandwiches and burgers for locals and visitors since he was 26. Phillip is Phillip Epley, 57, who’s been poking his head in the door of Pat’s Snack Bar — and just about every other downtown business — each morning, like clockwork, since the mid-1980s, when Lawson’s late father, Pat, still ran the place. Phillip comes around just to say hi, maybe sit for a spell. “He’s a real sweetheart,” Lawson says as he wipes a towel across the faded Formica countertop where two policemen nurse cups of coffee. “He’ll be here before long.” The officers smile knowingly. 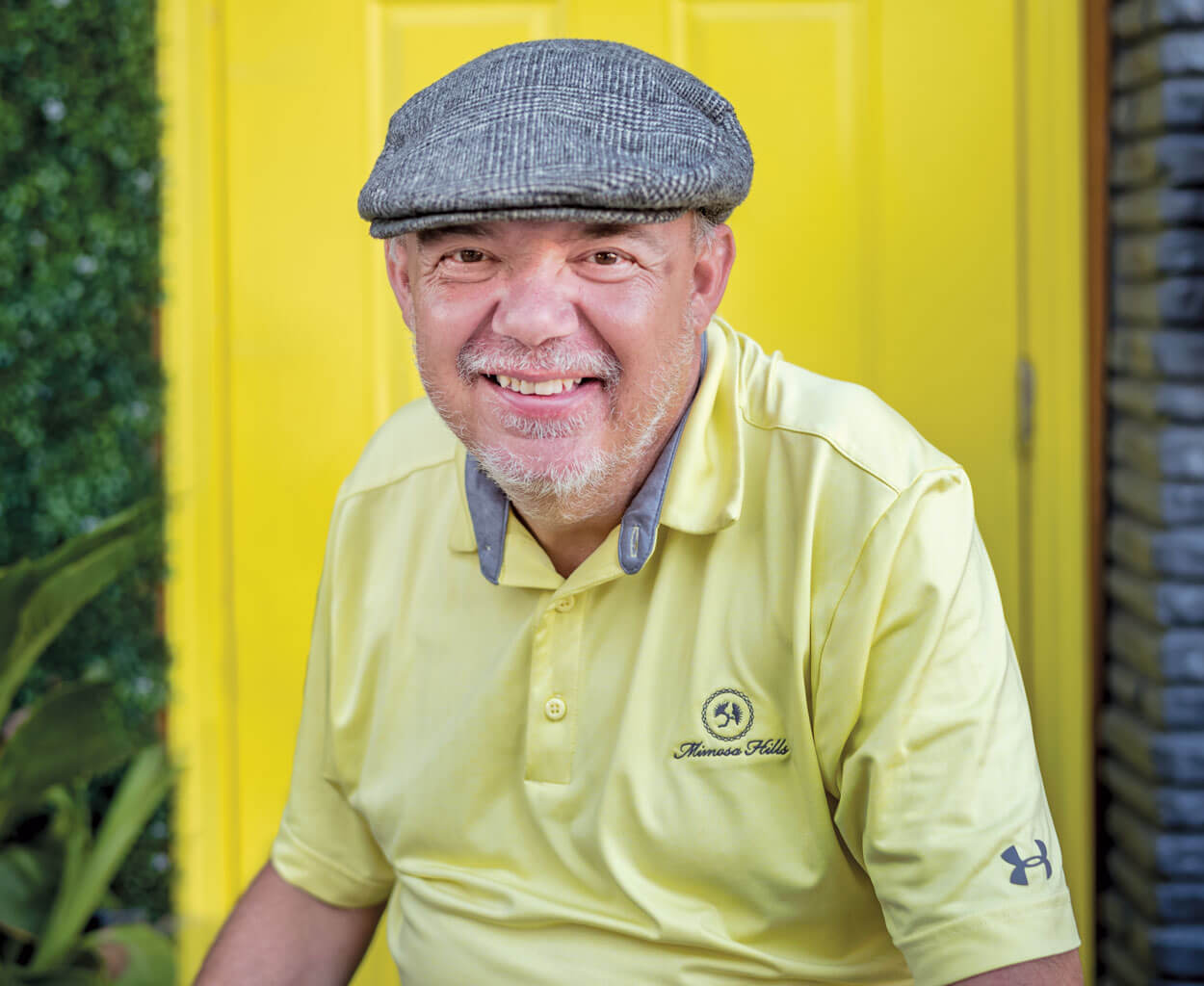 Phillip Epley is the glue holding the Morganton community together. photograph by Charles Harris

Phillip is the unofficial mayor of downtown Morganton. To be sure, this little foothills community of about 16,500 — eight miles north of South Mountains State Park and about a dozen miles east of Pisgah National Forest — has an official mayor, but folks in the central business district will tell you that Phillip presides over the downtown streets, and over the restaurants and shops that line them. Spend time with any of the business owners or regular customers around these parts, and conversation invariably turns to Phillip: Whether at an early-morning meeting of Morganton’s Friday Coffee Club at Grind Cafe, at a power lunch at Homer’s Soda Shop, or over a quiet dinner on the tree-canopied patio of Root & Vine bistro. Whether browsing the gorgeous hand-forged iron sculptures and wooden tabletops at the Oak Hill Iron + Wood showroom or watching pottery demonstrations at Hamilton Williams’s gallery and studio about a half-mile northeast on Union Street.

Phillip emcees local concerts and events at nighttime hot spots like Brown Mountain Bottleworks, and sits in on daytime performances at The Natural Olive, a gourmet olive oil and food shop a block and a half away. He plays drums with local bands, and he strolls the downtown streets, tote bag in hand, ducking into all the front doors. He gets to know the travelers, too — the hikers, rafters, climbers, and other outdoor enthusiasts who spend their nights in Morganton bars, restaurants, and hotels before heading off to explore the surrounding mountains. And all the while, Phillip connects the local bartenders to the local politicians, the artists and musicians to the cops on the beat. 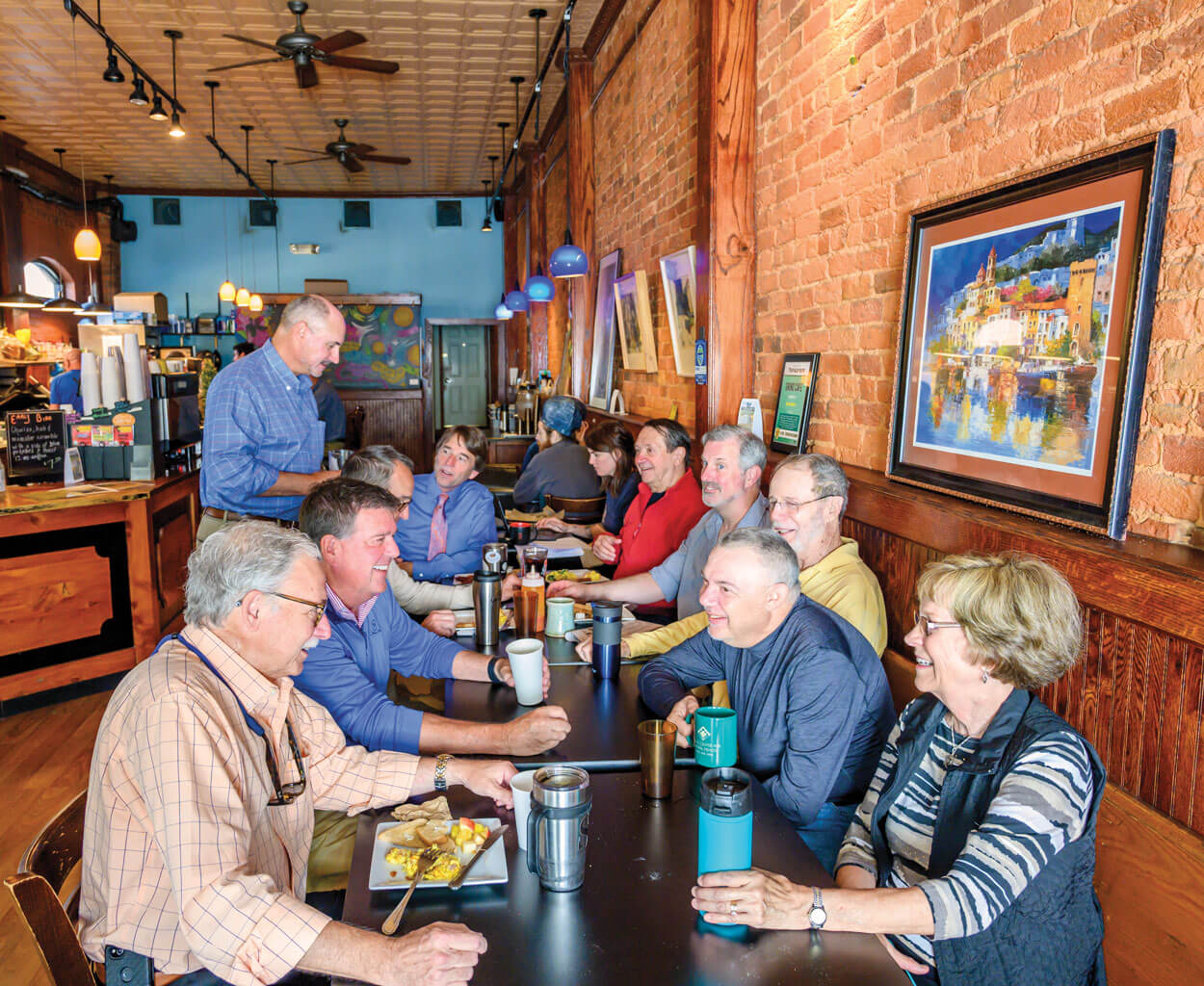 “People do know me, and they hear my voice, and they love me,” Phillip says matter-of-factly, but with a bashful smile. “I walk all over town. I’m very proud to be from Morganton.” Developmentally disabled since childhood, he was born and raised in nearby Glen Alpine and later attended Morganton’s West Concord School, which at the time was a school for exceptional children. At 20, Phillip, his brother, and their mother moved closer to downtown, to the house where he still lives today. It’s just a few blocks from Pat’s Snack Bar and the grand Burke County Courthouse at the top of the hill, which, like Phillip himself, is at the heart of the city. 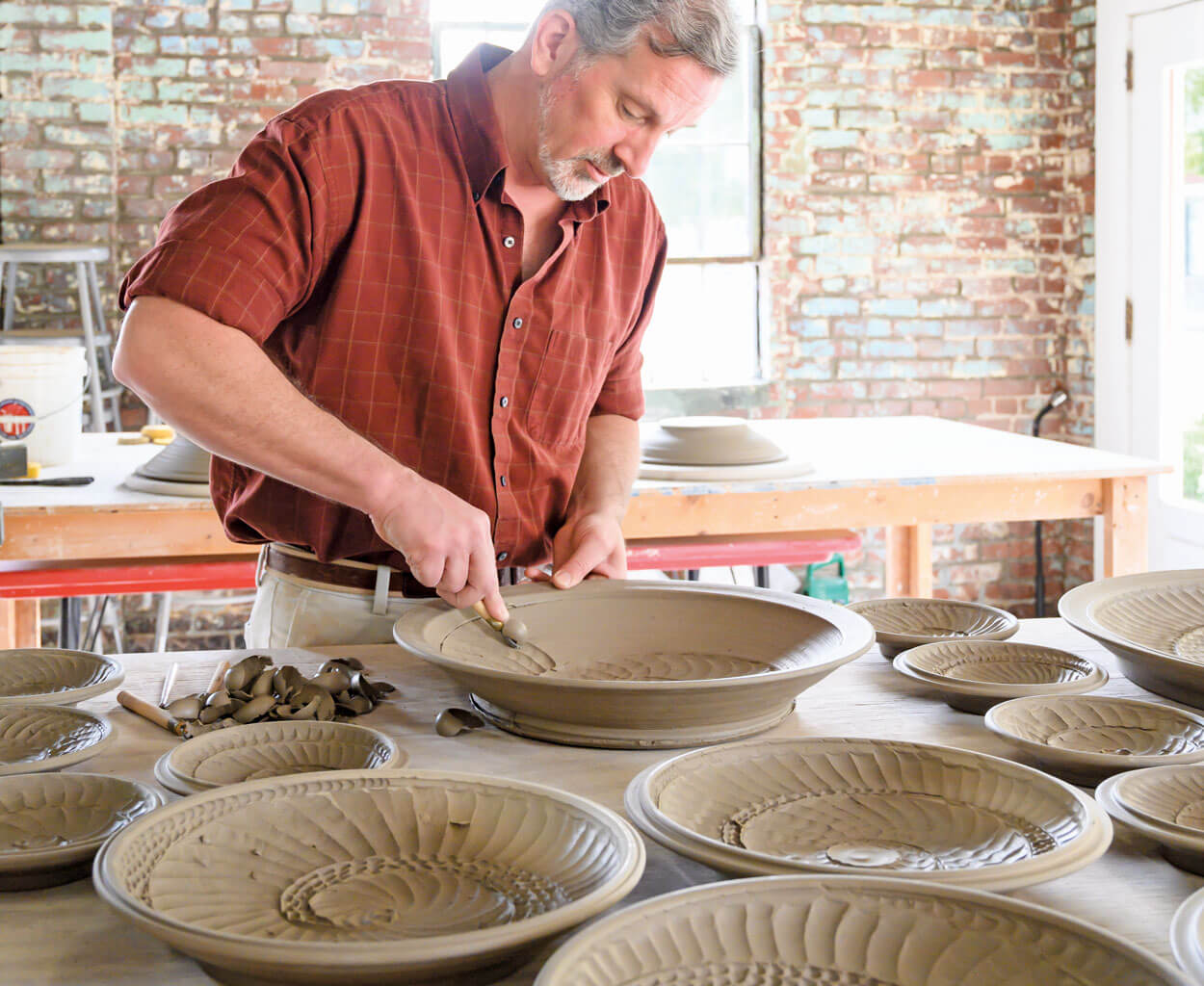 These days, Burke County bills itself as “nature’s playground.” But Morganton, its seat, didn’t start out as a hub for tourists looking to explore the nearby rugged Linville Gorge, the spectacular 80-foot-tall High Shoals Waterfall in South Mountains State Park, or the 154 miles of rippling shoreline around Lake James. It began life in 1784 as a court town, and by the mid-1800s, it hosted the North Carolina Supreme Court’s summer sessions. During the latter part of the century, two institutions — the Western North Carolina Insane Asylum (now Broughton Hospital) and the North Carolina School for the Deaf — were established in Morganton, beginning the town’s long-standing support system for people with specific needs. To retired Morganton attorney Scott Whisnant, the city’s history as a headquarters for those institutions has given residents a more nuanced understanding of people with different abilities. “One of the nice things about Morganton is that we deal with people with special needs every day because we have all these state institutions around us,” he says during a Coffee Club gathering at Grind. “Those places broaden our perspective about our citizens.”

“I walk all over town. I’m very proud to be from Morganton.”

Clothier Benjamin Belton arrived in Morganton in 1977, just 29 and fresh from working in the Triangle area as a buyer for a corporate menswear shop. He had a vision and bought a little storefront at the corner of Sterling and Union to open an eclectic clothing shop, which he and his wife call Benjamin’s and Libba’s. “I was in search of an identity,” says Benjamin, now 67. “I don’t like anybody telling me how to put clothes together, because then you become a clone — like every other store. I like to run and dodge and shoot from the hip.”

Born in Mount Airy and schooled at Appalachian State University, Benjamin says he felt comfortable moving to a small foothills town. Besides, the Hickory-Morganton-Lenoir area’s robust furniture industry attracted customers who were looking for something a little different. “A lot of creative people who understood fashion came into our region back then,” he says. “So it was important for us to always be looking for what’s new, what’s next, what’s different.” 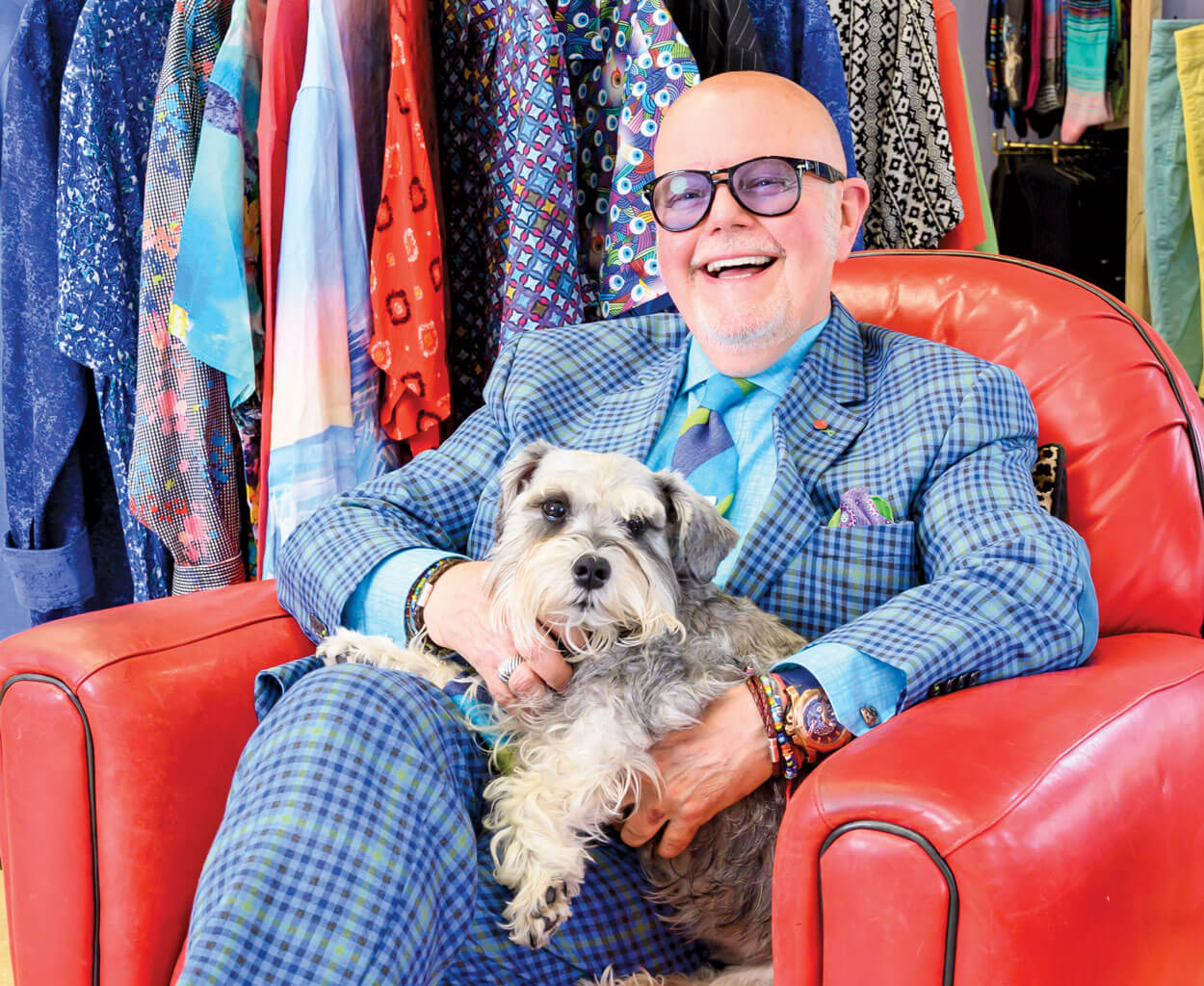 One would have to work hard to walk out of Ben and Libba Belton’s eclectic downtown boutique looking like everybody else. “We don’t buy from any particular collection,” says Ben. “This store is the collection.” photograph by C2 Photography

By the early 1980s, though, the area had become stagnant. Buildings were aging, and people weren’t coming downtown as much anymore. Morganton had to reinvent itself. In 1982, a year after Phillip’s family moved downtown, the city became one of seven in North Carolina — along with Clinton, New Bern, Salisbury, Shelby, Tarboro, and Washington — to adopt the Main Street Program, in which millions of dollars were pumped into revitalizing small, aging downtowns. At the time, Morganton still had a thriving furniture and textile manufacturing workforce, and over the next decade, new energy downtown began attracting a younger, more adventurous crowd that might have once traveled the hour west to Asheville for restaurants, galleries, and music venues. By the ’90s, things began changing again: In 1990, manufacturing still employed 49 percent of Morganton’s workforce; by 2008, only 27 percent worked in manufacturing, while a whopping 51 percent worked in the service industry.

Morganton’s pivot from textiles to tourism was a natural progression. With an already-thriving creative community and easy access to an array of mountain adventures, the town is small enough to retain a local feel: a place where people know each other and look out for each other. “From the ’90s and 2000s until now, it’s been a slow process of building back and reimagining the town,” Benjamin says. He points out the window of his shop to a row of businesses across Sterling. “See those buildings there? We have condos in the upper levels now,” he says. “And we just finished one down the street that was an old post office from 1932.”

The old soda shop downtown has been transformed, too, into a hip oyster, tapas, and cocktail bar. Owners Jamie McGimsey and Courtney Morse kept the original name, Homer’s Soda Shop, but brought a little whimsy to the place when they took part in a national pop-up cocktail party event during its first year, in 2018.

Homer’s was one of 90 locations around the world to host the Christmas-themed “Miracle” pop-up party. Like other participants, Jamie and Courtney strung up Christmas lights and served seasonal drinks and foods for their “Miracle on Union Street.” But when it was over, they didn’t take down the lights.

Courtney says the year-round holiday theme gives Homer’s a festive and kitschy vibe that attracts the kind of folks who gravitate to the city’s gallery crawls, concerts, and arts performances at the City of Morganton Municipal Auditorium. Jamie smiles as he buses a table nearby. Although everything inside Homer’s can be running smoothly when he and Courtney open the doors at 11 a.m., he says, “It’s not a good day until Phillip has come by.” 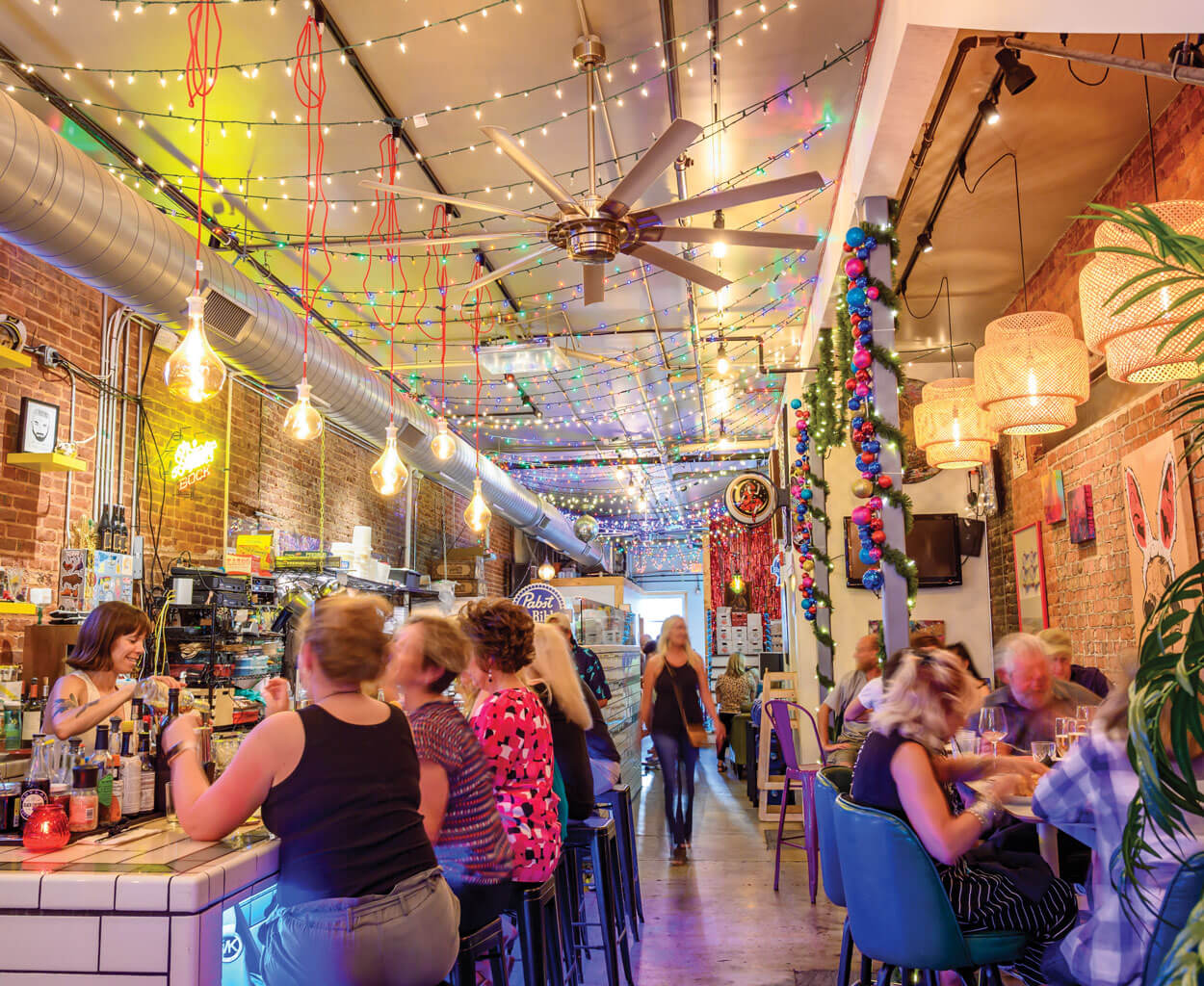 At Homer’s Soda Shop — the new bar on the block — co-owner Courtney Morse (far left) mixes up spirits under strings of multicolored lights, hung up during Christmas of 2018 and never taken down. photograph by C2 Photography

Back at Pat’s Snack Bar, Lawson looks out the front window and brightens. “There he is!” he says. It’s Phillip, wearing a yellow polo shirt tucked tightly into bright red shorts, tan socks pulled up practically to his knees, and a big smile across his face. He ambles in the door, says his hellos, and plops down on a stool, his tote bag falling to the floor next to him.

Three years ago, it looked as though Phillip’s days of walking Morganton’s downtown streets could come to an end. His mother, who’d been his safety net, died from cancer in 2016. Professionals suggested that Phillip might be better off in a special-needs home, where he would get ’round-the-clock care. To his friends and family members, that was unacceptable. The city’s downtown merchants and denizens banded together around him. Brown Mountain Bottleworks threw a big birthday bash and benefit concert in December that’s now become an annual event known as Phillip Fest. People from all over town showed up for the inaugural show, and Phillip, the popular emcee that he is, announced all of the performers. “If Phillip was in any other community, I’m not sure he’d be as well looked after as he is here,” says Keith Suttles, a retired North Carolina Forest Service employee who today works at Brown Mountain Bottleworks. “Other communities might marginalize him, but he is somebody in this town.”

Right now, he’s somebody at Pat’s Snack Bar, which is sort of a microcosm of the city: a family-run business eager to adopt new family members. “We’ve been in the restaurant business since … oh, about the middle ’40s,” Lawson says. “My grandmother was in the business, and sometimes we had four or five places going at once.” He motions to his daughter, to his left, taking an order from a customer, and his nephew, to his right, fixing an egg sandwich, just like his uncle does. “It’s still a family business,” Lawson continues. He pauses and looks up at the photo of his father, Pat, that hangs above the front door. “We have a lot of new people moving to Morganton from bigger places. It’s just a big ol’ melting pot — always has been, but now more than ever.”