I started the 2020 growing season on March 1, planting tomato seeds in dozens of paper cups. Seedlings emerged days later, pale green and skinny. By April, I eased them into the filtered sunlight of my backyard.

One day, I noticed the leaves of my precious heirlooms turning yellow. I deduced that it must be the seed-starter mix. My go-to feed-and-seed store — the one with rows of seeds in Mason jars and an old Farmall tractor in the back and a pet goat in a dog pen by the side door — had closed over the winter, so I’d hastily picked up an unfamiliar prepackaged blend. It drained poorly. And it obviously lacked something the baby plants needed.

I drove to the feed-and-seed store closest to me now, the Rock Garden in Denton, explained my dilemma, and left with a bag of Jolly Gardener seed-starter mix. One week later, the once-sickly tomato plants were thriving. Lesson learned.

The employees at Mauney’s Farm, Home & Garden in New London are professionals at answering questions from distraught gardeners. But the 2020 growing season tested their troubleshooting skills. An abnormally wet winter stretched into spring, and the threat of frost lingered into May. Those weather extremes confused even experienced gardeners, not to mention the wave of first-timers spurred by the pandemic. 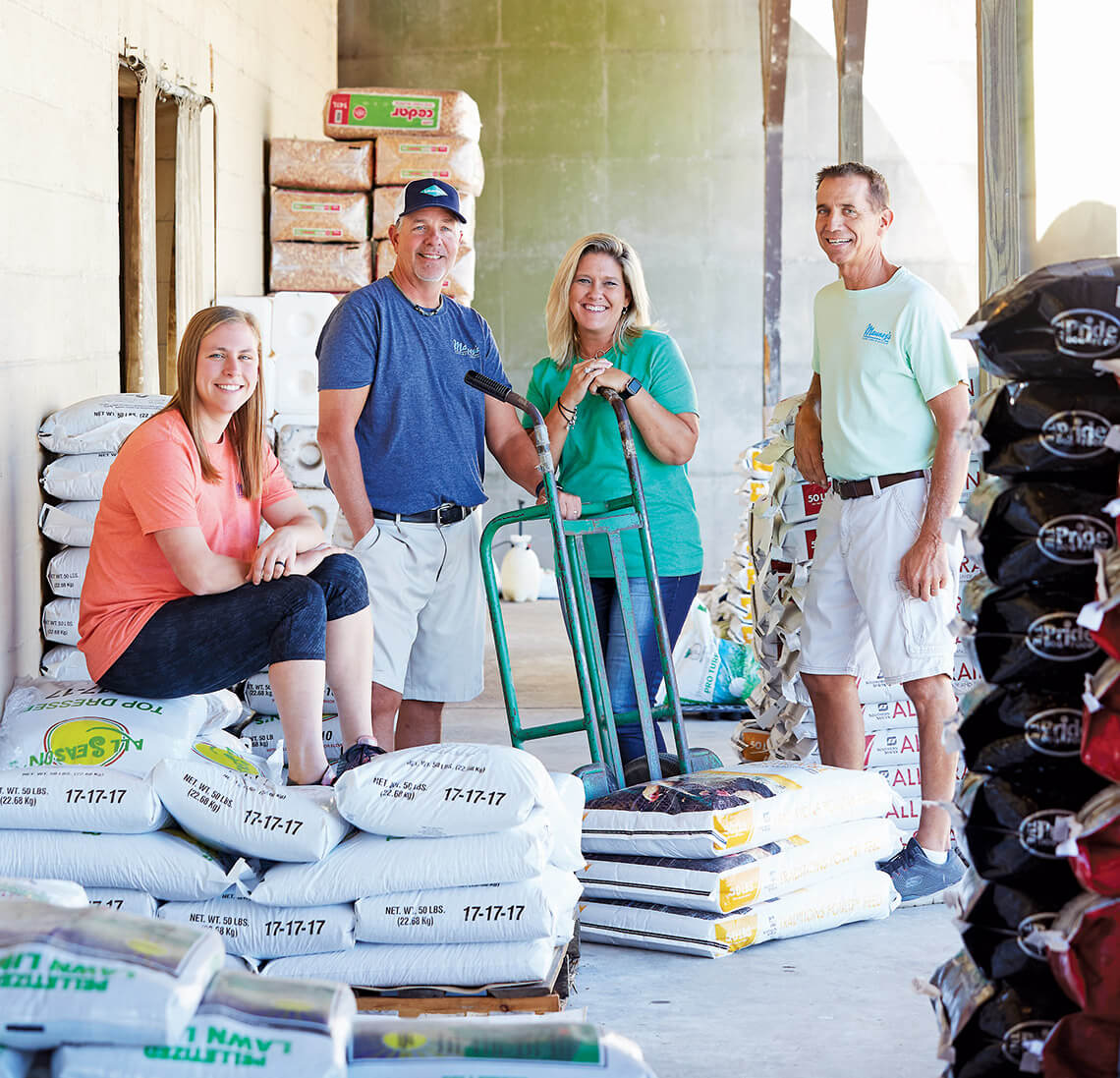 Longtime employees at Mauney’s include (left to right) Dakota Evonsion, owners Kelly and Beth Vick, and Darrell Mauldin, all of whom grew up within 10 miles of the store. photograph by Stacey Van Berkel

Shortages at grocery stores revealed just how dependent we have become on supermarket bins to stock our kitchens. As frenzied shoppers stormed stores, people wondered where their food might come from if the shelves turned up empty. Stay-athome orders also left people with idle time on their hands and desperate to flee their computer screens.

“It created a new generation of gardeners, some we haven’t seen in a long time and some we’ve never seen,” says Kelly Vick, owner of Mauney’s.

Vick — athletic, clean-cut, and energetic at 51 — recounts stories from spring 2020 while seated in a rolling chair in the Mauney’s office, sipping a Diet Pepsi. Photos of local baseball teams dot the wooden walls. “Mauney’s” is spelled out in horseshoes above the office door, which remains open for staff members to holler back and forth as customers walk in and out, asking about fence posts and sizes of syringes and nitrogen content in fertilizer and varieties of turnip seeds.

“There was a three-month period in the spring where it was a solid blur,” Vick says. “Any type of vegetable, any brand, any variety, we sold it.”

The business on U.S. Highway 52, across the road from North Stanly High School, started in 1956 as Mauney Feed Mill. James Mauney founded the mill to feed his own hogs, but he soon attracted other farmers. Over the years, the feed mill portion of the business declined, but the home-and-garden side grew. Vick started at Mauney’s in 1990, and he and his wife, Beth, bought the store in 2005.

“It was great,” Vick says. “Business was good. The economy was strong. And I was young enough and dumb enough to think we could tackle the world.”

In 2007, the recession struck. Around the same time, chain stores like Tractor Supply Co. moved in as competitors. They were bigger and flashier. But one thing they couldn’t compete on was experience.

The beginning of May is an exciting time for a tomato gardener.

The leggy sprouts I babied through a temperamental spring begged for more space. I sprang them from their paper cups and planted them in my raised-bed garden. I placed them deep down in the holes, pinching off the lowest leaves and pulling up soil around their stems.

When the plants got top-heavy, I staked them with homemade cages. When I caught sight of a hungry groundhog, I wrapped each cage with chicken wire. When I spotted the dreaded black worms that bore into the fruit just before it ripens, I sprayed an all-natural pesticide. When the soil was dry, I watered. When it was wet, I weeded. And all the while, I waited.

On a warm, humid morning in late summer, David Blackley stands in the garden at Renfrow Farms in downtown Matthews. He makes a swoop with a butterfly net, demonstrating one of his favorite weapons against insects. Seventeen people trail behind him, hanging on each suggestion, as he and his daughter Pressly Williams lead one of their beginner gardening classes. The farm and classes are an educational extension of Renfrow Hardware, located just up the street. 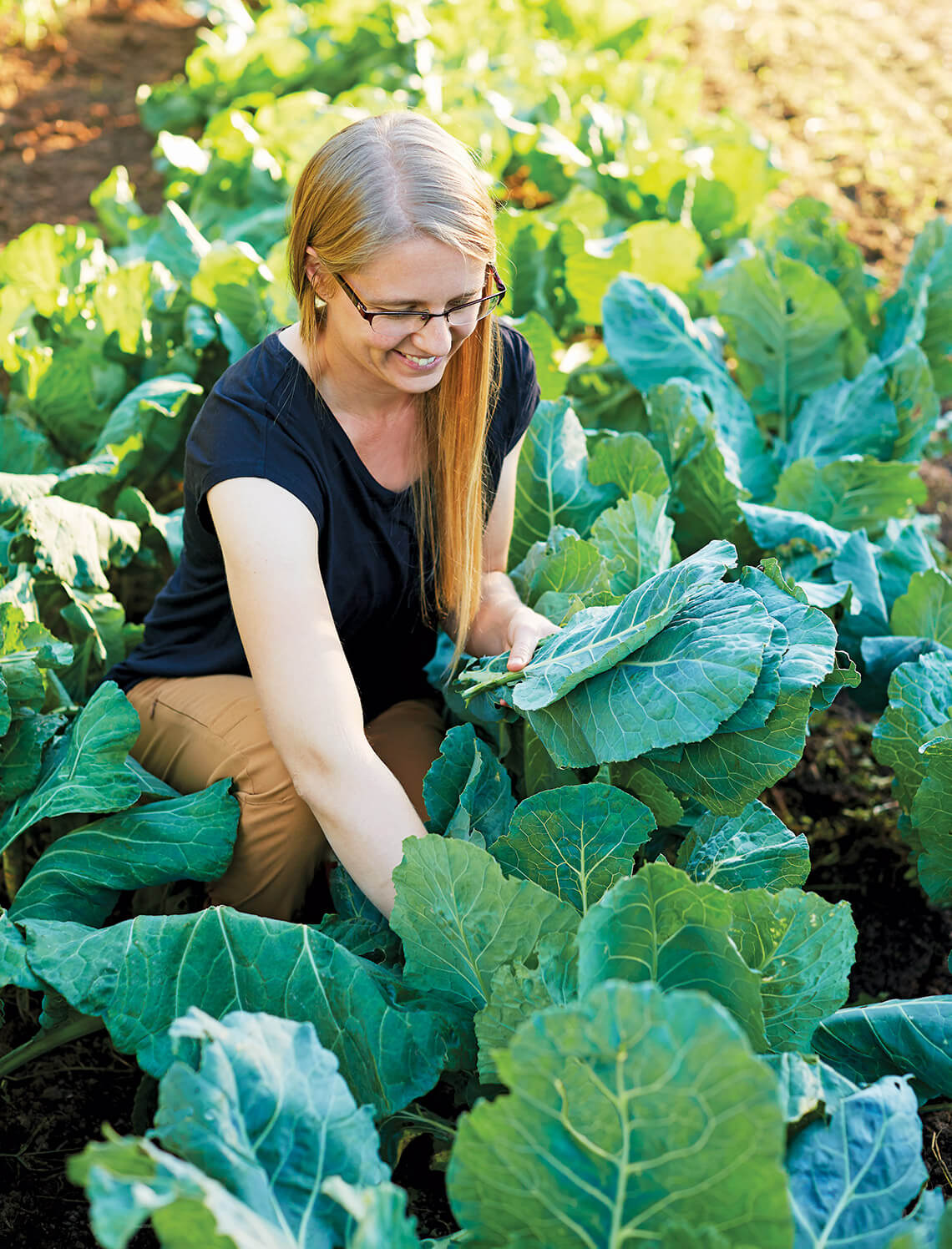 At Renfrow Farms in Matthews, Pressly Williams puts her advice into action in the collard patch. photograph by Stacey Van Berkel

In 1900, Thomas Jefferson “Captain” Renfrow, a thriving cotton farmer, established Renfrow General Merchandise as a store and cotton gin. Throughout the year, farmers bought supplies on credit and settled their debts in late fall when they brought in their cotton to gin. In 1984, the third generation of Renfrows sold the store to Blackley. Just like Captain Renfrow, Blackley tailored his business to the community. The farm business dried up as fields around Matthews, just 12 miles southeast of Uptown Charlotte, filled with houses and shopping centers. Blackley began catering to homeowners, adding a hardware portion and expanding the garden department. 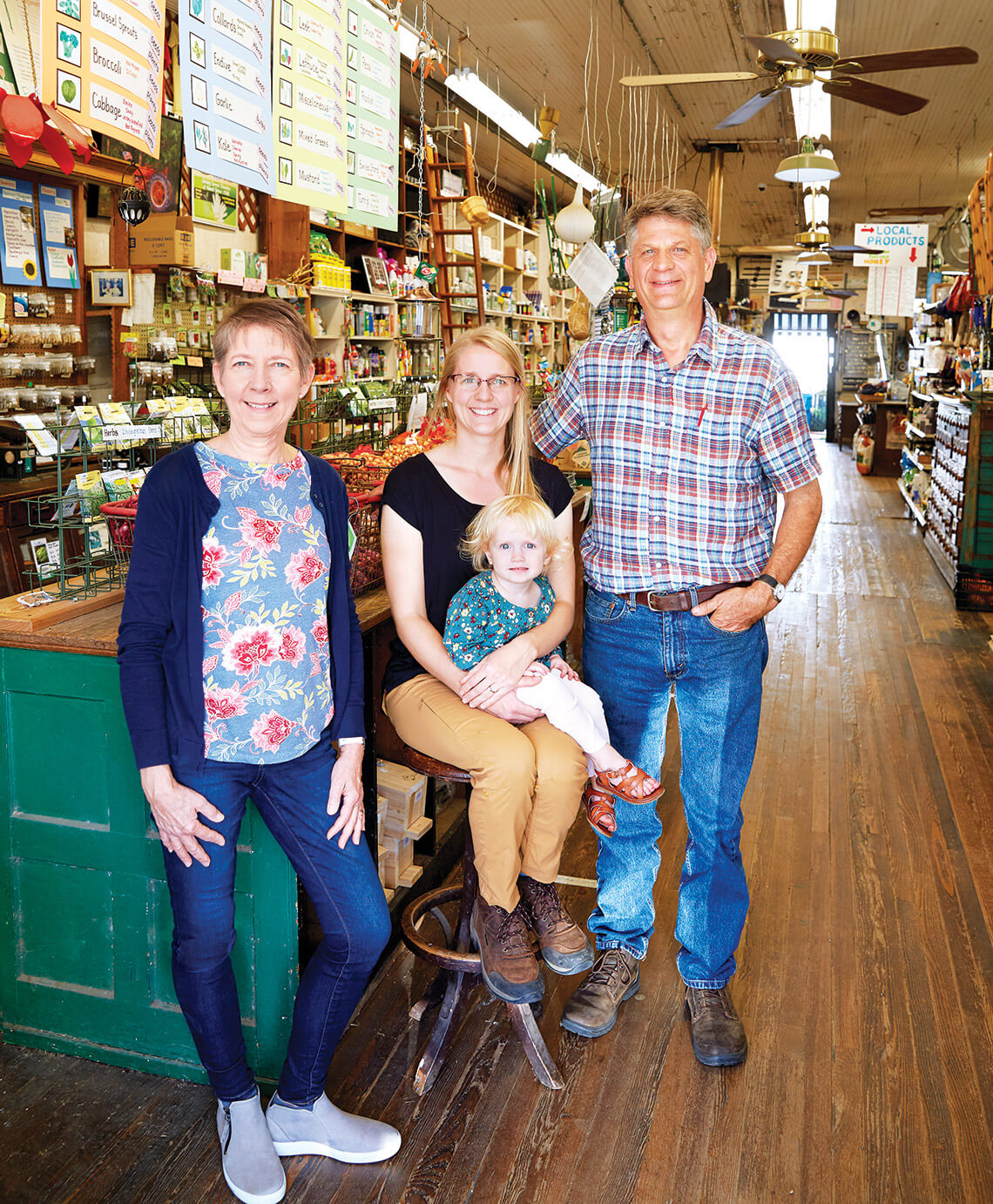 The Blackley family — Mary Beth and David, along with their daughter Pressly Williams and granddaughter Rosalyn, 2 — at Renfrow Hardware. photograph by Stacey Van Berkel

Blackley and his staff weigh out seeds and also sell them by the pack. They sell plants out of the greenhouse and chicks each spring. They also sell everything that customers need to raise those plants and animals. And when it comes to cooking and preserving the bounty, they sell supplies for that, too.

“We believe in living the life we’re trying to sell,” Blackley says. “We sell chicken feed and chicks because we have chickens of our own. We don’t sell house paint because I don’t like to paint.” 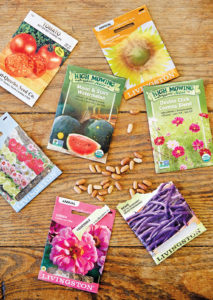 Just as the 2020 growing season began, Renfrow Hardware closed for a few days to figure out how this century-old business was going to survive its latest challenge: the pandemic. Despite occupying approximately 10,000 square feet of space, the store isn’t conducive to social distancing. They developed a curbside system, taking orders at the front door and handing plants and potting soil out the back.

Customers were even happier than normal. They smiled while waiting on the sidewalk to place orders for half runner beans and Big Boy tomato plants and Yukon gold seed potatoes.

“People ate it up,” Blackley says. “When we had chicks, I bet the chicken line stretched all the way to the post office.”

The store supported those enthusiastic customers with its e-newsletter, which Williams fills with gardening tips each week. Blackley recorded online videos called “stove-side chats” that he filmed next to the store’s iconic woodstove. And when gardening classes resumed, every spot sold out.

In the dog days of summer, just when I feared I’d spent five months fretting only to grow vines and not much else, I spotted it — the first tomato. One day, I decided its pinky-red color was red enough and plucked it from the vine. The first tomato of the year is one of my favorite flavors, earthy and sweet.

I picked one or two more tomatoes in the days that followed. Then, all of a sudden, I filled up my basket from a single vine. I needed a much bigger basket. I erected my tomato table on the back deck. Tomatoes soon spilled onto a neighboring card table. I shared with family and friends. I canned and froze pints and quarts. I ate BLTs and pimento cheese with tomato and as many mayo-and-tomato sandwiches on white bread as I could hold. By early October, my appetite, pantry, and freezer were full, and my vines were empty.

As a salesman for Wyatt-Quarles Seed Company, Keith Haynes calls on feed-and-seed stores in 13 counties in southern central North Carolina and upstate South Carolina. When the 2020 growing season caused seeds to fly off the shelves at Mauney’s in New London and Renfrow in Matthews, Haynes restocked them.

Wyatt-Quarles has been selling seeds to North Carolina farmers and gardeners since 1881, when the company was founded as a general mercantile in Raleigh. Four generations of Wyatts later, the company operates as a wholesaler in Garner.

Haynes started working for Wyatt-Quarles in 1981 as a student at NC State University. When he graduated, he joined the sales team. He still writes orders in pencil, but he traded his 30-pound catalog for a laptop. 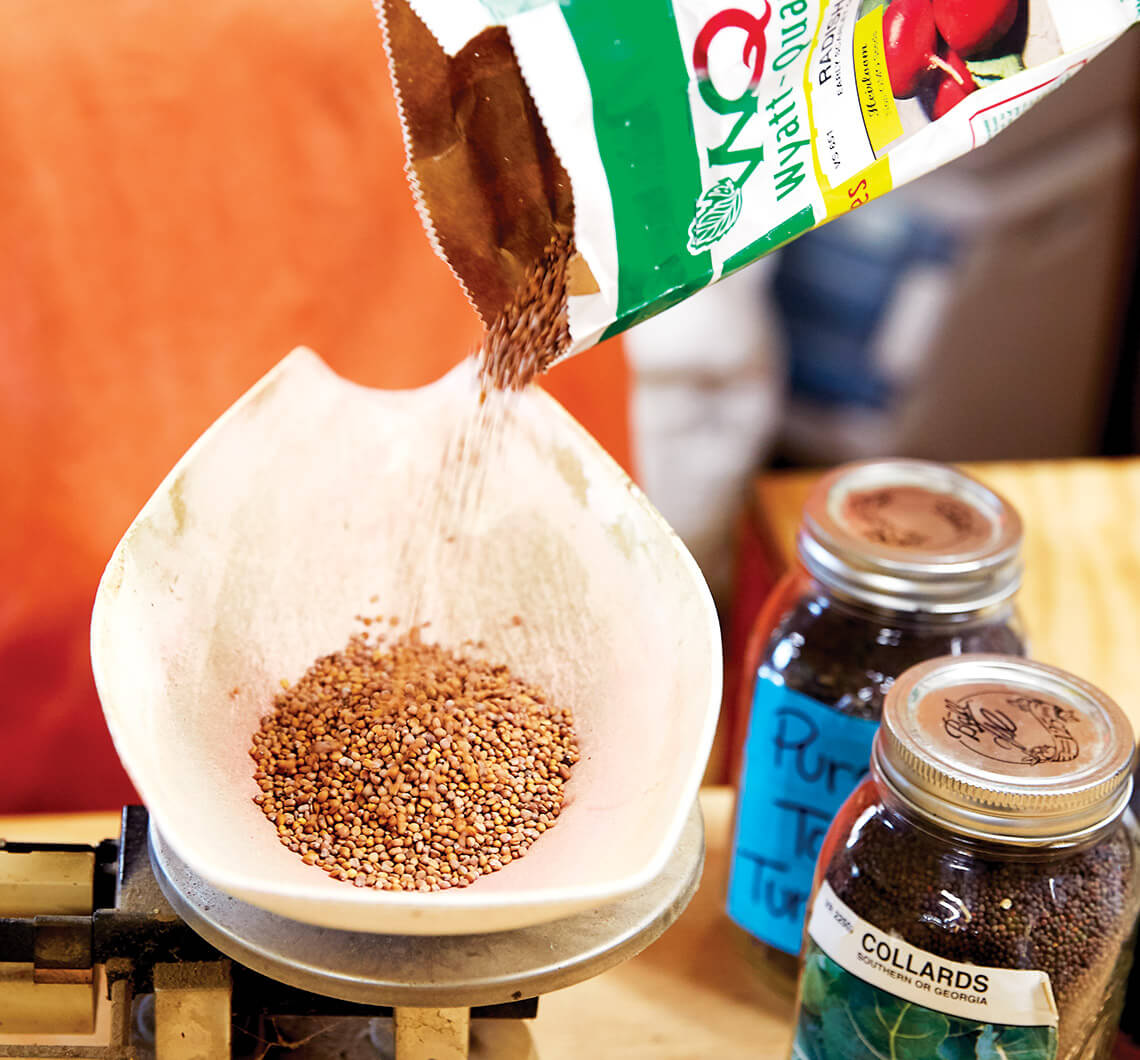 Haynes understands his customers’ needs because he grew up spending summers in the garden with his grandparents. He can explain the difference between planting the eye of an Irish potato and the slip of a sweet potato. He can walk you through how to cold-pack green beans. And he can tell you how he stretches tomato season through the fall, often enjoying his final tomato of the year after Thanksgiving.

Although a few have come and gone, Haynes’s core customers have remained the same for nearly 40 years. He believes that the businesses he works with have succeeded and will continue to do so because they think differently.

“I think independent dealers will survive because they’re innovative,” Haynes says. “They try to see which way things are going and be on the cutting edge of figuring it out.”

No one saw which way the 2020 growing season was going to go. No one imagined that a global pandemic would resurrect a desire in people to put their hands in the dirt and plant something. No one thought it would frost on Mother’s Day or rain an extra foot, either. But when it happened, the people at the Rock Garden in Denton and Mauney’s in New London and Renfrow in Matthews were there to answer questions.

But more than that, they were there to sympathize with their customers. Because they live the life they’re selling, they understand the despair when a customer comes in with a problem. They want to sell you what you need, but more than that, they want to see you succeed. They want to rejoice with you when you grow a bumper crop of tomatoes. They want to pet your dog and call him by name and see pictures of your grandchildren. They want to be part of the community. And if the 2020 growing season taught us any lessons at all — in a year that was good for tomatoes and not much else — it taught us that it takes a healthy community filled with people interested in the well-being of others to make it from one season to the next.