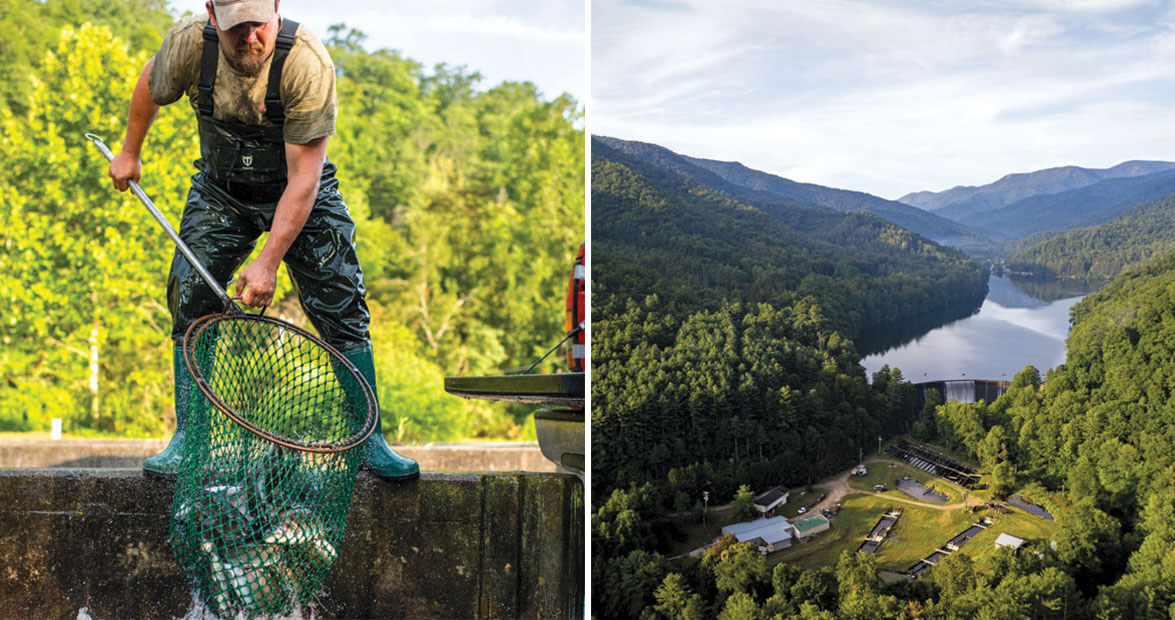 The inspiration came from Europe, but the execution was pure Appalachia.

Dick Jennings had been farming trout in western North Carolina for nearly four decades when, in the mid-1980s, he decided to add to his product line. On several vacations to Europe, he had fallen in love with caviar and lox and other cured fish. Smoked salmon is delicious, he thought. Trout would be even better.

Back at his farm — tucked into a gorgeous valley near Waynesville — Jennings cobbled together a smoker of his own design. First, he bought a 20-foot refrigerated truck trailer and backed it up to the loading dock. A propane line supplied heat to the trailer, and four inches of sand on the floor helped with insulation. He pushed an old wood-burning stove under the trailer, cut a hole in the floor, and poked the flue inside. A machine shop down the road custom-welded steel racks. Jennings loaded the racks with fish and the stove with hickory logs. A match, some kindling, a few hours, and voilà: smoked rainbow trout.

“If anybody from the FDA had walked in and seen that — whoa, Nellie, it just wouldn’t have gone well,” Sally Hudson, Jennings’s daughter, says with a laugh. “But it made incredible smoked fish.”

Today, Sunburst Trout Farms owns a high-tech smoking rig and, each year, ships more than half a million pounds of trout to restaurants and retailers around the country. But some things haven’t changed: the incredible fish, the farm’s stunning location, and the joyful dedication of the family that runs it. 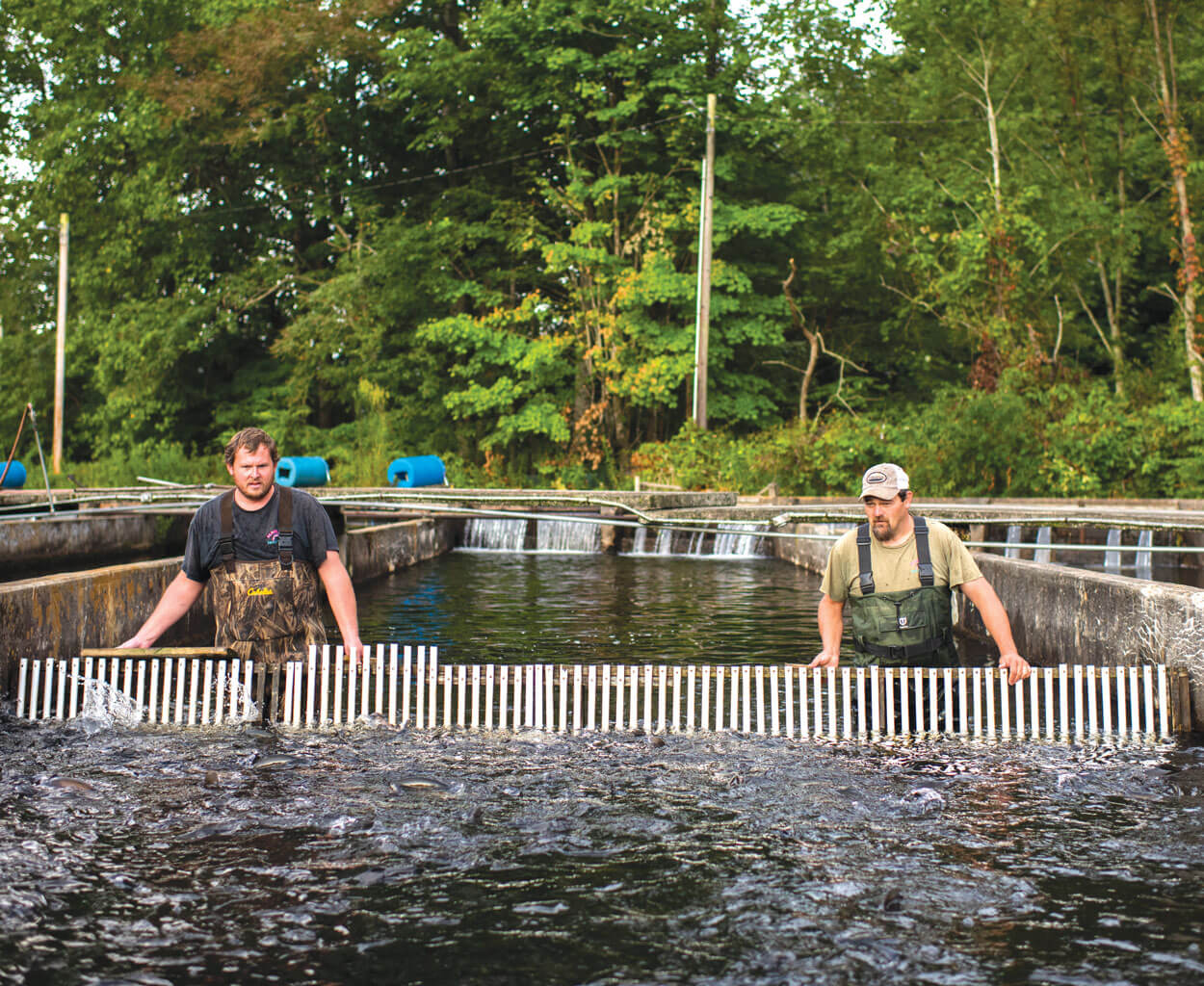 Dean Inman (left) and Ben Eason operate a nifty filtration system that contains the big fish and lets the little ones swim back through the grate. photograph by Jack Sorokin

A Scion of a Pittsburgh oil family, Dick Jennings fell for the Smokies during childhood summers spent on land his grandfather owned in Cashiers. While studying at Yale just after World War II, he heard the mountains calling, dropped out of school, and started farming trout on his grandfather’s property.

After two decades in Cashiers, Jennings spotted a fresh opportunity in Haywood County, on a sliver of land along the Pigeon River’s west fork. It was — and remains — a noisy spot, thanks to the roar of water pouring over the spillway of Lake Logan Dam and crashing down 60 feet into the riverbed. In 1932, Champion Coated Paper Company built the dam to regulate the flow of water to its plant in Canton. When Jennings visited in the 1960s, he recognized that the lake — 87 acres of crystalline blue surrounded by Pisgah National Forest — also offered a reliable supply of cold, clean water. He made his pitch to the paper company, secured a 1,000-year lease, and built his new trout farm. Eventually, it would be rechristened Sunburst, a name borrowed from a logging village that had been flooded by the creation of Lake Logan.

In Cashiers, Jennings had sold only live fish to be stocked in ponds and streams. After building the Haywood County farm, he got into the food business, processing trout for sale to restaurants and groceries. He acted as chief salesman, too, badgering seafood buyers up and down the East Coast.

“My dad could be real annoying,” Sally says. “He got lots of doors slammed in his face.” In sales, though, there’s a fine line between annoying and persistent, and it wasn’t long before Jennings scored a big contract with Giant Food, the Maryland-based supermarket chain. That deal led to others, and soon, Sunburst was thriving.

A match, some kindling, a few hours, and voilà: smoked rainbow trout.

Jennings’s smartest move may have been persuading his daughter to set aside her nursing career and join the family business. It was Sally who, in the late 1990s, realized that a food movement was building, and that more people were starting to care about where their vegetables and meat and fish had been raised. Sunburst had a good story to tell, and she told it to anyone who would listen. After making the rounds of industry conferences, Sally found a champion in Rick Moonen, a big-time New York chef with a deep interest in sustainable seafood. Sunburst earned national exposure from a 2002 feature in Wine Spectator (engineered by Moonen) and a contract with Whole Foods. Sally, though, credits the company’s lasting success to local supporters, especially the Appalachian Sustainable Agriculture Project (ASAP), which, since 2000, has performed the patient work of persuading people that homegrown food both tastes better and helps the community. Sally joined ASAP’s board and, every Saturday, set up a booth at its farmers market in downtown Asheville. Soon, Sunburst had earned a spot on restaurant menus in Asheville and across the region.

“Chefs talk, and word on the street got to be that we’re a good supplier,” Sally says. Then came the hard work of living up to the reputation: “Man, it keeps you on your toes.”

Sunburst is now in the capable hands of Sally’s children: Ben Eason, tall and quiet, does the books, works the processing line, and supervises the farm. His brother, Wes, more gregarious, handles sales and marketing and runs the smoker. Their sister, Katie Hughes, manages a retail shop, Sunburst Market, at the company’s processing plant on the outskirts of Waynesville. And a gaggle of grandchildren is waiting in the wings.

After a few generations, trout start swimming in the bloodline. Back in the 1980s, not long after Dick Jennings built his first smoker, he also decided to start selling trout eggs, known as roe. Sally led the research and development effort, brining test batches of eggs and storing them in baby-food jars in her fridge at home. One day, she came home early and found the babysitter in the living room and her two youngest — Ben and Katie — on the floor of the kitchen, clad in diapers and surrounded by open jars of roe. Exploring the fridge, lured by vivid orange spheres in baby-food jars — their jars, after all — they had staged an impromptu, toddlers-only tasting panel. Naturally, they nailed it. “They were just using their fingers,” Sally recalls, “and they had put aside the jars that they didn’t think were great.” Those jars were mostly full, but Ben and Katie had eaten all the eggs from one particular jar — “and that’s close to the brine we still use,” Sally says. 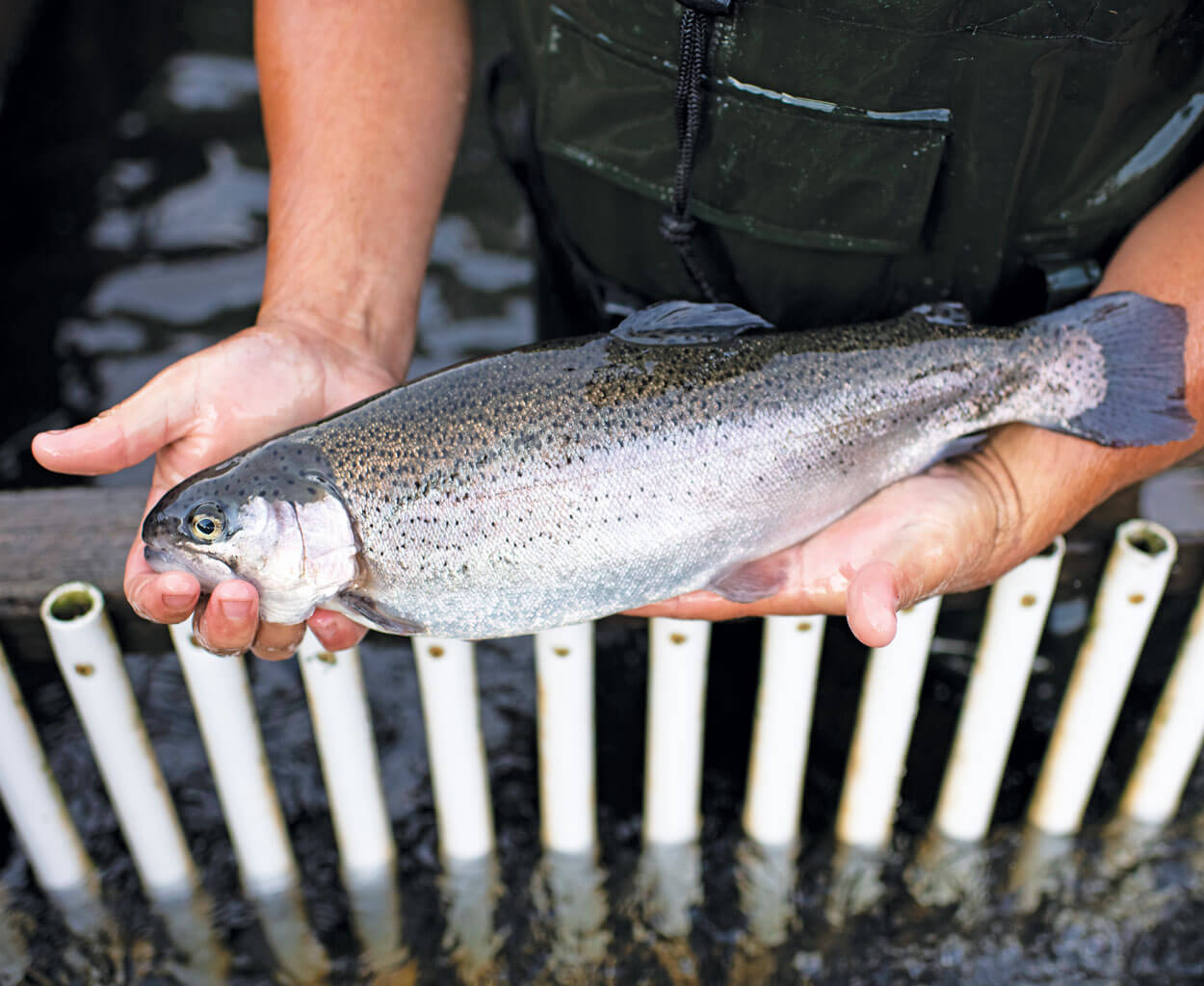 Sunburst trout spend about 18 months swimming against the current and eating sustainable feed before going to market. photograph by Jack Sorokin

While catfish and tilapia can thrive in any old mud puddle, trout are the divas of aquaculture. They’re happiest swimming in 57-degree water, and they do fine if it climbs as high as 67. Water warmer than that puts them off their feed. Fortunately, Lake Logan supplies just what they need.

The trout farm looks much as it did when Jennings first built it. A three-foot, galvanized steel pipe carries 6,000 to 7,000 gallons of water a minute from the wall of Lake Logan Dam, across the river, and into a series of concrete troughs called raceways. Sunburst buys fingerling trout and drops them into the water, where they swim against the current, gobble sustainable feed, and build lean muscle. When the fish have grown to a pound and a half — this takes about 18 months — they’re netted and dropped into a tanker truck for the 20-minute ride to the processing plant. There, the fish are stunned in a bath of ice water, cleaned, filleted, and immediately sent out via FedEx or delivery truck to retailers and chefs like Katie Button of Cúrate and other acclaimed ventures in Asheville.

“The fish are swimming in this amazing, pristine location,” Button says. “I placed an order for some fillets last night at 11 p.m. I know they’re not going to pull the fish out of the water until this morning, and then they’re going to deliver it to me this afternoon. You can’t ask for anything fresher.” 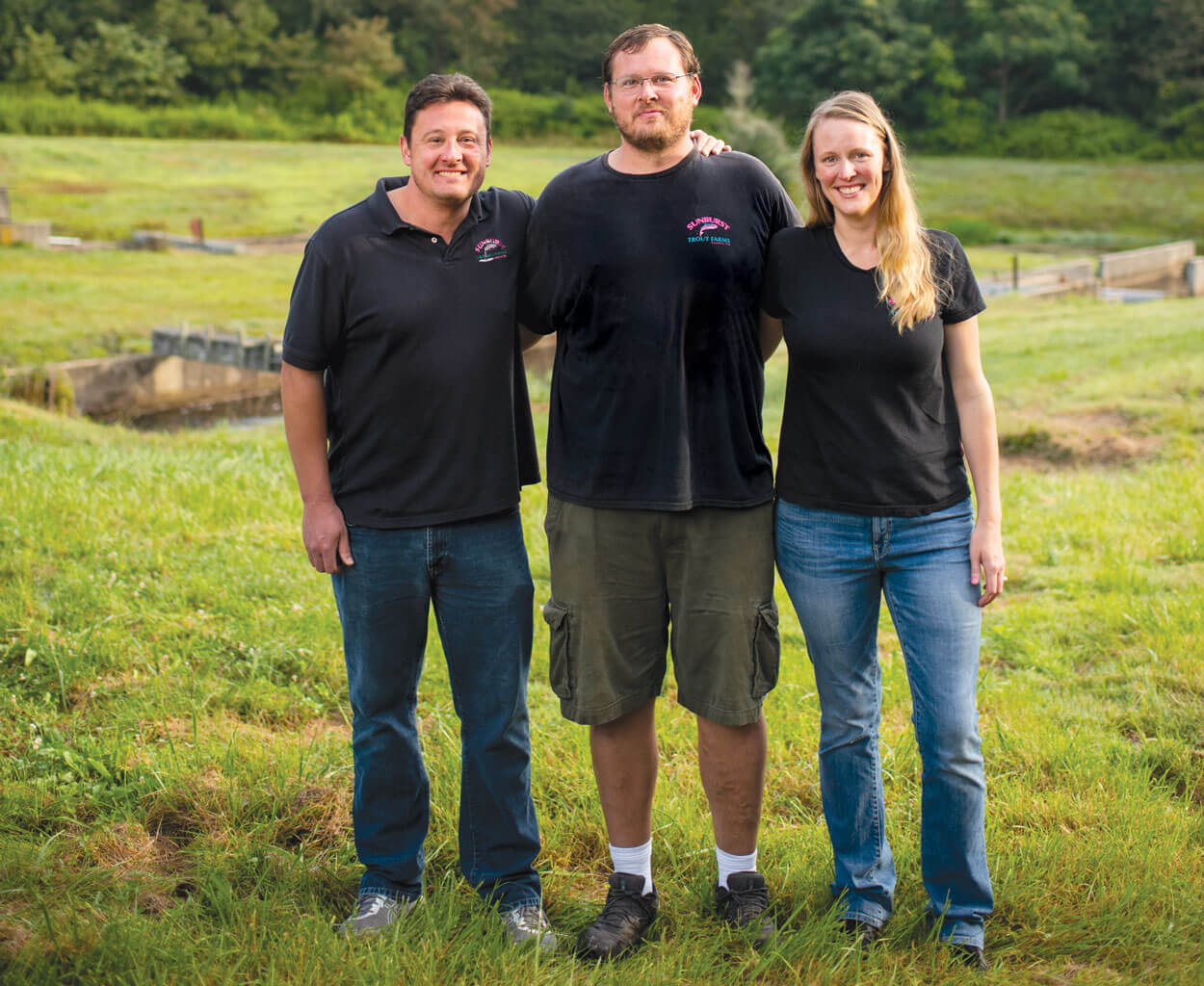 Siblings (left to right) Wes and Ben Eason and Katie Hughes manage all aspects of the Sunburst Trout operation. Started by their grandfather Dick Jennings and carried on by their mother, Sally Hudson, the business remains a family passion. photograph by Jack Sorokin

Fish not sold fresh are salted and smoked, a process that adds flavor and extends shelf life. Sunburst’s best seller is the hot-smoked fillet (sold as “hickory-smoked” because too many retail customers mistakenly assumed that “hot” indicates spice rather than oven temperature). The company also makes smoked trout dip, jerky, cold-smoked fillets, and roe (branded as “trout caviar”).

Fillets destined to be hot-smoked soak overnight in a bath of brine before landing on racks in the smoker, a computer-controlled device that leaves nothing to chance. Attached to one side is a hopper that drops hickory sawdust onto a steel hot plate, producing careful doses of smoke and a peak temperature of 170 degrees. Wes sent sample batches to trained tasting panels at NC State University and staged less formal tests with kids, plant employees, and assorted associates, including “people who would just as soon eat a chili dog for dinner.” The hot dog aficionados, Wes reports, “often gave the best feedback.” 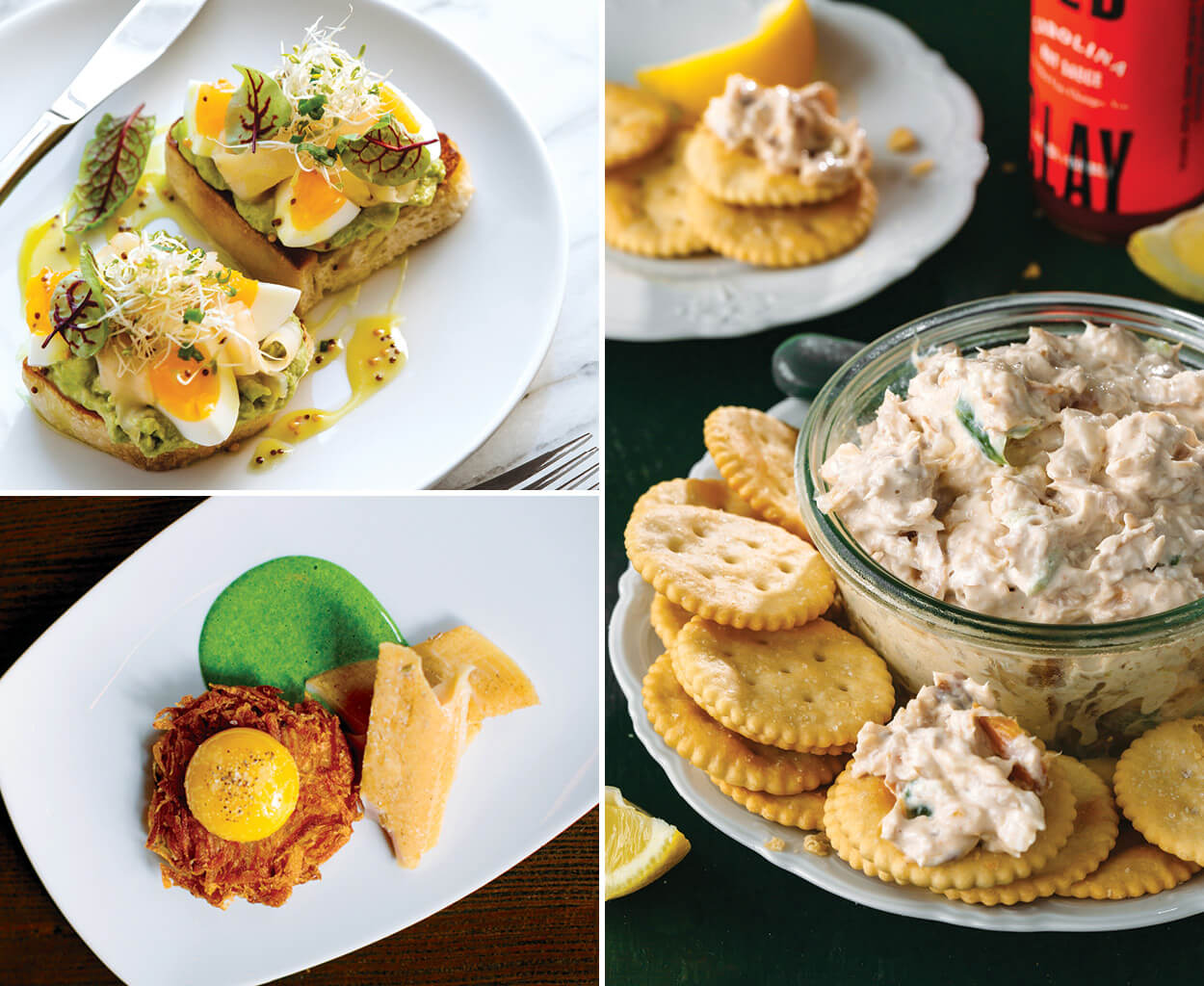 Smoked trout three ways: on seasonal toasts at Postero in Hendersonville; whipped into a dip at home; paired with an olive oil-poached yolk as Latke Benedict at Littler in Durham. photographs by Jack Sorokin

For the cold-smoked trout, raw fillets are coated with a dry mix of salt and herbs, allowed to cure overnight, then rinsed and smoked for two and a half hours at 55 degrees. What emerges tastes much like lox: rich, buttery, and perfect atop a bagel with cream cheese.

The roe gets a soak in brine and then 30 minutes of smoke — just the right amount, according to Chef Button, who has paired Sunburst roe with deviled eggs. Too many foods on the market “are kind of hammered with smoke,” she says. “Sunburst has a more delicate hand. The smoke is pronounced — you can taste it — but it doesn’t kill your palate.”

Sunburst’s smoked trout is now sold by the elite mail-order firm Petrossian, where it shares catalog space with caviar selling for $500 an ounce. And the fresh fillets are on the menus at some of the best restaurants across the Southeast, giving new prestige to a once-neglected dish. Sally remembers a time when fish in the inland South meant one thing: cornmeal-crusted catfish. Her own mother — the wife of a trout farmer — “hated trout,” Sally says. “She hated to cook it, hated to smell it, hated everything about it.”

Some folks are a hard sell. When Wes works a demo table at a rural grocery, many shoppers tell him that they don’t eat fish. But he’ll persuade them to taste a sliver of smoked trout, and more often than not, they like it. Some even exclaim, “Oh man, it tastes like smoked ham!”

“That doesn’t offend me in the least,” Wes says. “They’re tasting the hickory and the fat. I love that.” With a little help from salt and smoke, Sunburst is winning converts.