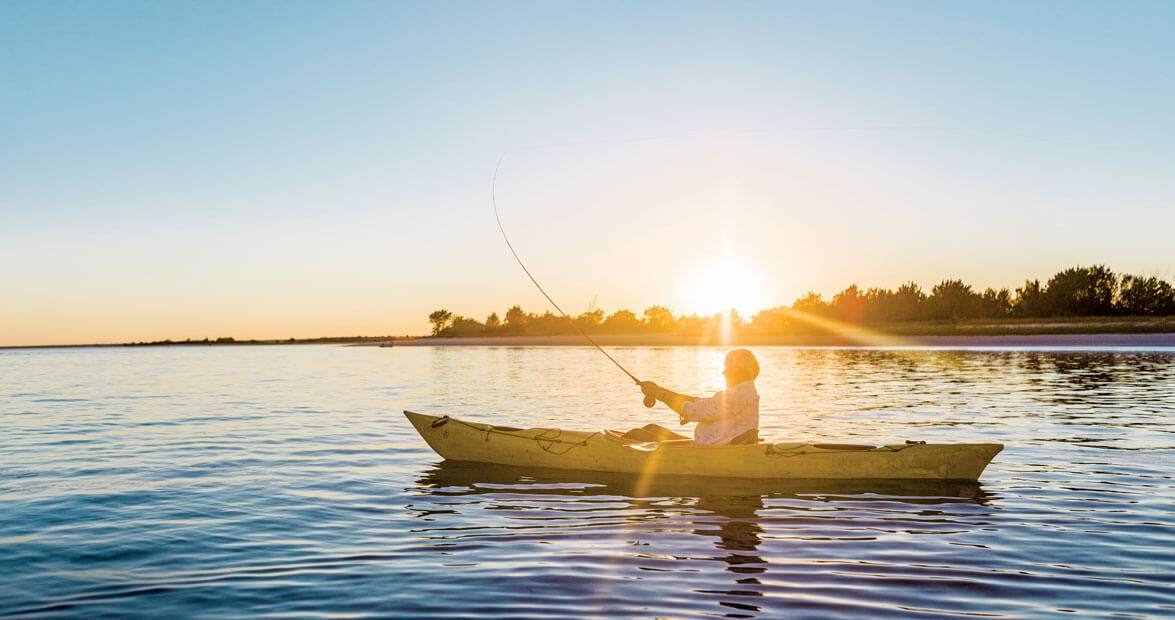 Easing on past middle age now, I’m taking on an adventure I’ve dreamed about for several years: fly-fishing from a kayak. The possibility has rested in the back of my mind: alone in a kayak, a marsh setting, perhaps near an island, fly rod and paddle. I haven’t checked the moon phase, the tides, fishing reports, nor anything else that might help. I don’t want to overthink it — get all bogged down with paraphernalia like rod holders or those khaki jackets with 12 pockets and flaps and zippers and a tiny portable grill in a hidden compartment. I want to go clean. I have a few saltwater flies in a small plastic box in my pocket — old ones that a fly-fishing buddy once left in my truck. I seek simplicity.

I stand knee-deep in water on the sound side of Wrightsville Beach, my left hand steadying a borrowed yellow kayak. In my right hand, I hold my trusty fly rod and reel. As for managing my equipment, if I have to, I’ll stick the reel end of my rod straight down my shirt back, at my neck, let the rod stand like an aerial while I paddle away. Then, when it comes time to fish, I’ll just lay the paddle across my stomach, grab the rod over my shoulder like an arrow from a quiver, and cast away. What could go wrong?

I visualize landing a three- or four-pound bluefish. As I paddle toward a little beach in a marshy area across the channel, I imagine the heave-ho tug of a fish on the line. My rod fits snugly at my side, reel down by my foot — no problem. In a few minutes, near the small, sandy beach across the way, I lay the paddle across my stomach, pick up my rod, and find my casting rhythm. Simple. Everything is working — and without all that extra gear.

I paddle and fish, paddle and fish, and, in a little over an hour, I reach Masonboro Island, a favorite spot of mine. It’s part of a vast, protected estuary system — the third largest in the country. On summer weekends, there are plenty of boaters and sunbathers and surfers and fishermen out here, but on this weekday, the island seems deserted. Peaceful. So away. Grasslands, marsh, soft sand, hard sand, dunes, silence.

No bluefish yet. But a beautiful day embraces me, and I have no worries beyond casting well.

When I moved to Wilmington in 2002, I’d never heard of Masonboro Island. It’s a barrier island that was lopped off the north side of Carolina Beach in 1952 when an inlet was dredged there. It’s protected, undisturbed; free of traffic, electricity, and capitalistic greed. You go there to get away — to surf, swim, sit, paint, read. All of which I’ve done — except surfing. That’s next year.

I live about 30 minutes from the island (accessible only by boat), and 30 minutes from Carolina Beach, where my fishing life started in the early 1950s. Back then, when my mother, father, and I headed out — in our green ’49 Ford coupe — from our rural home near Durham for our one-week summer vacation, we’d stop at Drewey Chandler’s Gulf station, at the corner of Angier Avenue and Miami Boulevard. The blinker light at that intersection formed the tiny core of our Piedmont community. Population: maybe 200. The light blinked red and yellow regularly, like a beating heart, day and night. Mr. Chandler kept a worn emergency $20 bill for families going on vacation. You stopped and picked it up. If there was no vacation emergency, you returned the $20 bill for someone else to use. 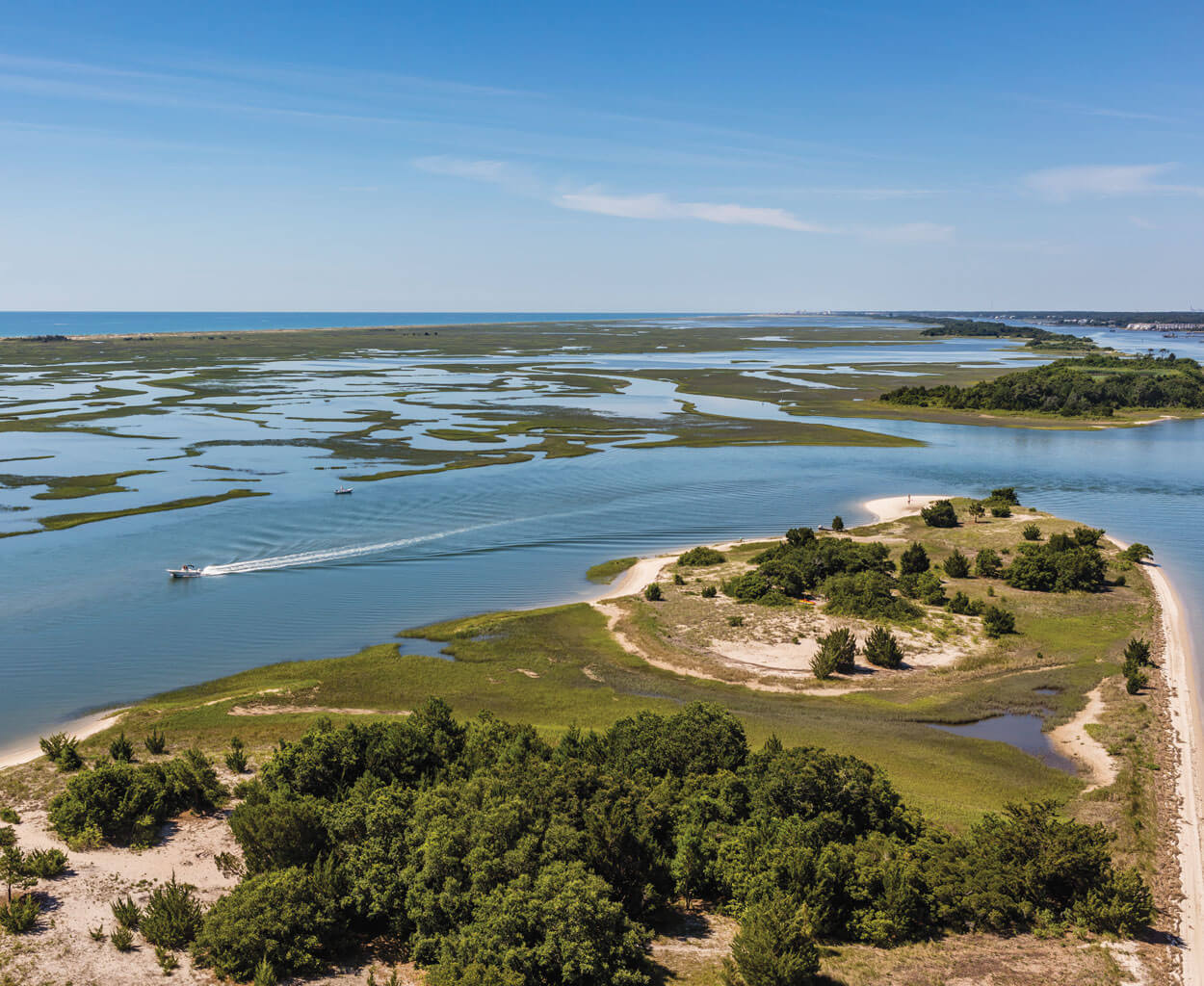 Masonboro Island, part of the NC Coastal Reserve and National Estuarine Research Reserve, is a fisherman’s paradise. Much of our seafood gets its start in these rich, sheltered waters. photograph by Baxter Miller

Then we’d head for neighbor Bud Daughtry’s little cinder-block vacation house near the ocean at Carolina Beach. I had no idea we were on a peninsula called Federal Point (renamed Pleasure Island in 1972), with Bald Head Island to the south and Wrightsville Beach (a barrier island) to the north. All I knew was Carolina Beach, the Las Vegas of my Southern Baptist childhood: Ferris wheel, Putt-Putt golf, popcorn, Britt’s Donut Shop.

In those vacation days of the ’50s — Drewey’s $20 bill in my father’s wallet — I fished for many hours from the Carolina Beach pier, alongside loners, couples, and families. The choice for bait was bloodworms or shrimp. We were a bloodworm family. I remember one day when my line and hook dangled from the end of a yardstick. That pier birthed my hankering to fish, my love of the drama of hooking and pulling in supper.

Later in life, I fished inland ponds, usually with a Zebco spinning rod and black or red plastic or rubber worms to catch bass, or with a cane pole and Catawba worms to catch bream. In mid-life, once a year in the fall from 1981 to 2001, five middle-age buddies and I traveled to Portsmouth Island, the northernmost barrier island at Cape Lookout National Seashore, to surf-fish. We used rods and spinning reels with cut mullet for bait. We stood in the surf, day and night. Bottom fishermen we were, living for several days in old, electricity-free cabins, kerosene lanterns for light, sleeping on thin, crusty mattresses. Away from the nasty world of commerce and pretension, soaking up sunlight, sea smells, and unadulterated camaraderie. We had a pure-T blast.

I’d gone from childhood bottom-fishing from a southern North Carolina pier to middle-age bottom-fishing off a northern barrier island. I had spanned the scope of fishing options. Or so I thought. And then, Tim McLaurin — farmer, writer, teacher, wild man, and close friend — presented me with a fly rod and reel for a wedding gift in 2001. Using a fly rod among boyhood friends or with my bottom-fishing buddies was never fathomed. As likely as speaking French. I mean, I’d actually fished with a yardstick.

The fly, moving at just under 400 miles an hour, catches me behind my right ear.

If you’ve learned to fly-fish, then you understand the initial frustration — muscle memory, all that. A breakthrough begins with the realization that you are not tossing a lure, a weighted plug — you’re tossing a line that has weight. After Tim got me fly-fishing for bream and bass in Chatham County ponds, another wild-man friend, Vic Miller (whose flies I was using to no avail in my kayak), and I took several fly-fishing canoe trips. Vic would never use anything but a fly rod, and he had this saying: “I’d rather stay home and ______ [unprintable] than use a spinning rod.”

Just as I was beginning to be a bit biased against my own bottom-fishing history, another friend and writer, Louis Rubin, intervened. His book The Even-Tempered Angler: Being a Treatise in Praise of the Fine Art of Bottom Fishing, balanced things out. Turns out, I could, without guilt or discomfort, fly-fish or bottom-fish — I could have it both ways.

Back in the kayak: So far, I have tangled a line once or twice, maybe three times, but nothing has been as difficult as I’d feared. No fish yet, of course, but because my pants are soaked and I want to stretch my legs, I come ashore near the northern end of Masonboro to try my luck from the beach. I stand in water six inches deep and cast my saltwater fly, which has a very tiny hook and a few little streamers that, when wet, appear to be a minnow’s body. At the fly’s head: a small, round steel ball. When you’re casting for distance, that thing rockets perilously close to your head.

The act of casting has come back in full. I’m surprising myself with my accuracy — placing the fly where I want it. I’m confident. But I need an audience. I’m ready to show off. This is when accidents happen, of course. In the middle of a cast, I lean wrong or something. The fly, moving at just under 400 miles an hour, catches me behind my right ear. The sound inside my skull: a muffled 20-gauge shotgun blast. I almost drop to my knees, stagger once, regain my composure, and sit down on the shore. Quiet minutes tick by before I’m ready to begin again.

More or less recovered, I climb onto the rock jetty at the northern end of the island to cast from there — carefully this time. No nibbles, so I decide to fish along the inland shore. If that doesn’t work, I can always walk the short distance to the ocean side of the island. The wind is not up. I should be able to cast into the Atlantic surf with ease. Maybe that damn bluefish is out there.

While walking across the open sandy stretch from sound to ocean, I realize that I’ve caught more memories today than fish. I cast beyond the breakers, and a last memory surfaces: About 10 years ago, while fly-fishing in the surf at Wrightsville Beach — I was standing about waist-deep — I got into a school of Spanish mackerel. A lone man watched me from shore. I caught a few, stuffed a couple into my pockets (but they escaped), lost a few. I botched a cast or two. It was very exciting, and I was aware of the spectator all the while. Soon, the school was gone, and I waded to shore. On the beach, the spectator said authoritatively, “What you need is a spinning rod.”

I’m getting tired now, standing on the Masonboro beach, heaving my line into the tide. I return to my borrowed kayak and paddle home. No fish. But I’ll do it again in the fall, when the bluefish and Spanish mackerel will be running big time. If bad luck prevails then, well, maybe I’ll switch to bloodworms for bait and trade in my fly rod for a yardstick.