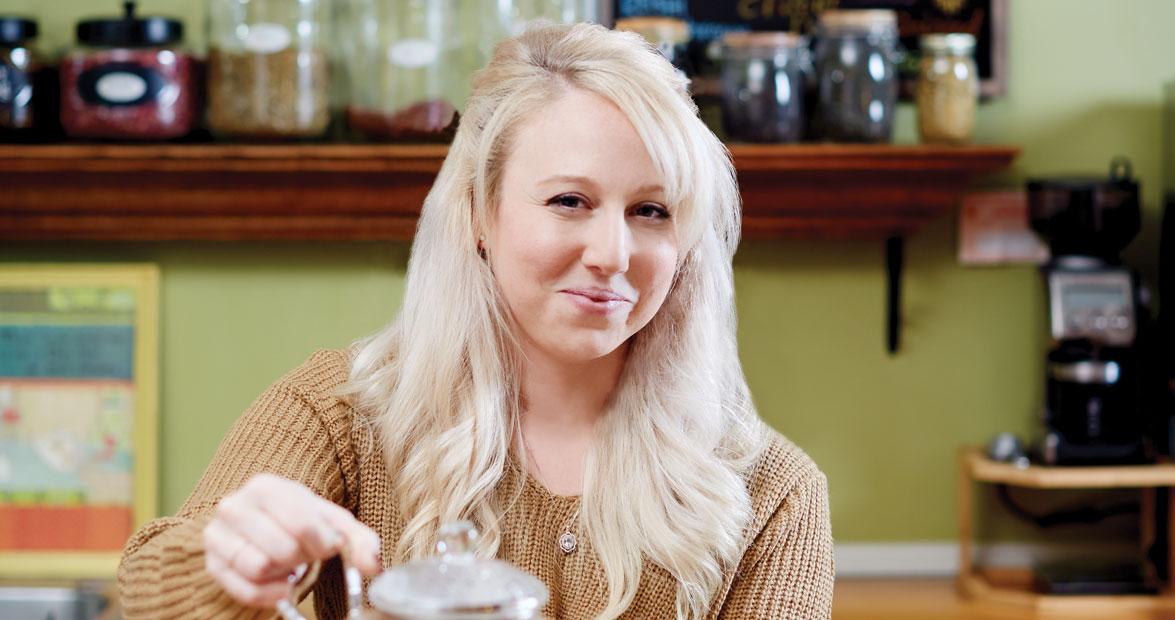 Staring up at the menu board, the weary traveler looks utterly lost. It’s early, and he’s already been up for hours, having left Atlanta before dawn. He needs his morning jolt, but the quaint storefront he’s stumbled into is not the coffee shop he’s used to. Perhaps the string of brass goat bells jingling inside the front door, or the teapots burbling behind the bar, or the amber-colored salt lamps glowing on the wooden tables should have given it away: This is a teahouse.

But Vida Pour Tea in Greensboro is more than that, too. For the non-tea drinker, the glass jars of exotic-smelling loose teas — roasted chestnut, ginger-laced pear, lavender rose, chocolate-covered strawberry, jasmine silver needle — can be vexing. The owner, Sarah Chapman — 4 feet and 11 inches of mellow good cheer — knows the bewildered, desperate look of a coffee drinker who is forced to contemplate tea. She’s just made herself a peppermint fenugreek almond milk latte sweetened with local honey. “Fenugreek is great for digestion,” she tells the weary traveler. “We make all kinds of funky stuff here.”

To which the chalkboard menu can attest: There’s matcha, oolong, rooibos, and aged pu’erh, along with herbs and add-ins like elderflower, slippery elm, cocoa nibs, turmeric, and St. John’s wort. Each ingredient holds the promise of something more than just a caffeine surge to start the day. In fact, the only kind of customer Chapman likes more than a coffee drinker is one who claims not to like tea at all. She gets a chance to change tastes and shape preferences.

With a little gentle interrogation, Chapman tries to uncover what a person needs, even if they don’t know exactly what they want. Any allergies? she asks. Sleep well? Stressed? Then, she turns back into her tiny kitchen and conjures the perfect drink. Our traveler ends up with a roasted chestnut black tea almond milk latte with cinnamon and honey from bees that live a few miles away. Tea drinkers love it, but coffee drinkers swoon.

Chapman’s gentle, inquisitive approach pairs perfectly with a life centered on tea. But it wasn’t always that way. Born in Syracuse, New York, where winter temps regularly stay below freezing, the petite Chapman spent her childhood playing, of all things, ice hockey. After big games, she and her father would celebrate — or commiserate —
over warm cups of floral-scented green jasmine tea at the local Chinese restaurant. A simple ritual that quietly sparked her appreciation for tea’s subtle ability to comfort and inspire.

As a student at UNC Greensboro, she majored in fashion — one too many concussions convinced her to leave the ice and design women’s hockey apparel instead. But on a school trip to Bangkok, Thailand, she got an up-close look at retail apparel in mass production. “And that’s where I said, nope, I don’t want to be involved in that,” she recalls. “I’ve been a vegetarian my whole life. I’ve been interested in the welfare of people and the rights of people and animals. Thailand was super eye-opening.”

The final moment of clarity came when she inadvertently ingested contaminated water and spent the remainder of the trip in the hotel bathroom. “I lost about 15 pounds!” The only thing that got her through was the hotel’s tea, which turned out to be jasmine, her old friend. “The trip was a short period of time, but it changed my life completely.” 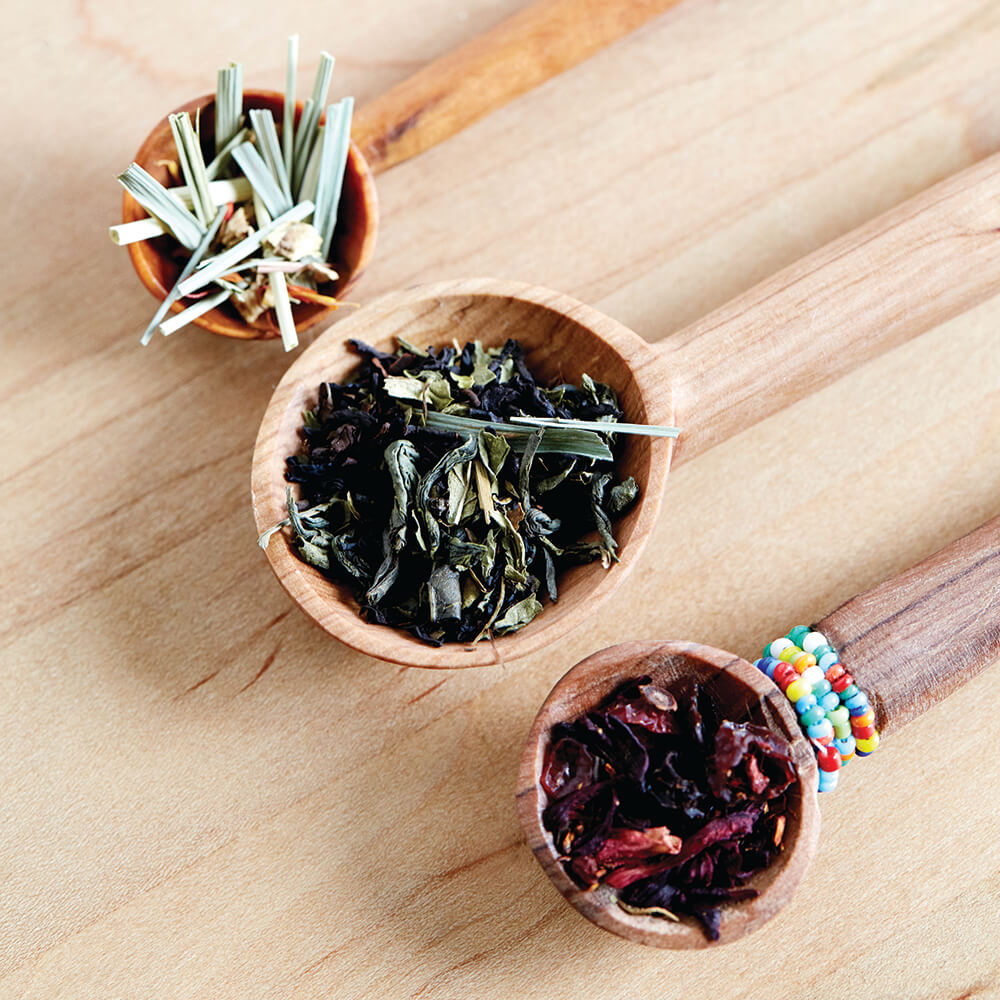 In 2013, after years of research and tea tastings, Chapman found a 1940s building on State Street and opened Vida Pour Tea — the name a play on the Spanish phrase vida por ti: “life for you.” Fair trade and organic, with abundant vegan and gluten-free options, the shop’s shelves are stocked with products made or grown by vendors whom Chapman has come to know. Most customers breeze in for a quick cup to go. And yes, she does sell coffee — but never has to brew more than one pot a day. “Every once in a while, I’ll have someone ask for a Frappuccino,” she laughs. “And I say, ‘Let me make you something better.’ ”

Frequent customers know to ask questions about which herbs and teas might help recalibrate their mood or energy level. “I’ve always had this kind of weird sense of being able to look at people and tell if they’re a little sad or something,” she says. “You have to really listen to each person.” Feeling foggy? There’s a blend for that. Congested and getting ready to board a flight? Chapman’s got you covered. Anxiety, edginess, even afternoon ennui — Chapman is willing to listen to complaints and offer a little help. “This is not new,” she says. “Tea is an old thing — as old as time.”

Or at least 500,000 years old, according to some archaeologists. Evidence of using plants for medicinal purposes goes back 60,000 years. Other than water, tea is consumed by more people than any other beverage on earth. And like wine, in which almost every variety — from chardonnay to pinot noir — springs from one species of grape, Vitis vinifera, every kind of tea comes from one species of plant, Camellia sinensis. The leafy evergreen shrub is native to China but now grows all over the world. What determines a tea’s character and color has everything to do with soil, climate, processing, even method of harvest.

Tea’s seemingly contradictory characteristics of complexity and simplicity appeal to Chapman. “It takes about five minutes, from start to finish, to make tea,” she points out. “But it’s something that can comfort your whole soul.”