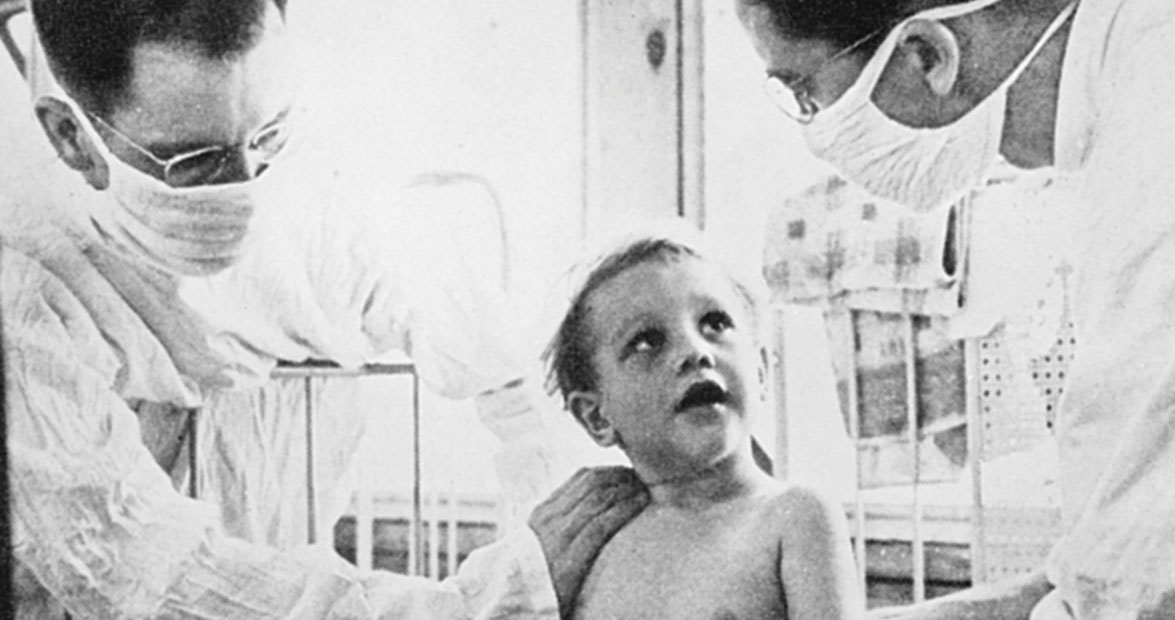 There’s an emergency brewing on the home front. As more than 150,000 Allied troops are storming the beaches of Normandy, France, a stealthy killer is infiltrating the western Piedmont of North Carolina: polio.

The first case is diagnosed in Catawba County on May 30 — almost a week before D-Day. Within a fortnight, 26 more children in Catawba and neighboring counties have been diagnosed with the disease. People are calling it infantile paralysis because it usually strikes infants and very young children.Its full medical name, poliomyelitis, is derived from Greek — polios for “gray” and myelon for “marrow.” The poliovirus attacks the tissue at the center of the spinal cord, causing temporary weakening of the limbs, permanent paralysis (one case out of every 200), and, when breathing muscles are paralyzed, as happens in 5 to 10 percent of cases, even death.

The mysterious nature of polio instills a sense of terrifying powerlessness — in parents, city officials, even doctors. Experts know that polio is caused by a virus, but exactly how it spreads is a matter of debate: Many think that flies are the culprit. Some believe that the virus is airborne. Health officials theorize later that the virus spread from outhouses used by those first infected, seeped into wells, and was rinsed into the many creeks and streams that web the Piedmont counties. Kids cooling off in their favorite swimming holes likely brought it home and into town. Polio can infect a patient for up to 10 days before symptoms occur and can thrive in a community for as long as a month before anyone realizes that the virus has struck.

When the first cases are reported in the western Piedmont, movie theaters, libraries, and swimming pools close. Shaking hands with a neighbor is considered too risky. People avoid congregating, even in churches, for fear of contagion. Drivers passing through affected towns roll up their windows tight despite the heat, afraid to breathe the same air that has infected polio victims. Some parents are afraid to admit that their children have polio, even to themselves — for fear of being ostracized by their neighbors.

Doctors across the country try a variety of treatments — from painful surgery and immobilization of limbs in casts, to less drastic therapies now in use, including manipulation of affected limbs, compresses, and hydrotherapy. But as of 1944, there is no cure for polio. No medicine can reverse its pernicious effects.

Before long, both the North Carolina Orthopedic Hospital in Gastonia and Charlotte Memorial Hospital are overwhelmed with polio patients — even after both convert other wards to polio isolation wards. C.H. Crabtree of the National Foundation for Infantile Paralysis — which will become known as the March of Dimes for its fund-raising campaign — arrives on the scene to consult. The Army loans him three large tents, now outfitted as polio wards on the grounds of Memorial and staffed by Red Cross nurses and a physical therapist.

The epicenter of the outbreak, Hickory, is the logical place for parents in outlying rural areas to bring their stricken kids — but the town of 15,000 has no hospital. Crabtree travels to Hickory to investigate. There, he confers with Dr. A. Gaither Hahn, chairman of the Catawba County Chapter of the Foundation for Infantile Paralysis, and Dr. H.C. Whims, a dual county health officer.

They agree that Hickory needs to open a hospital, fast. Dr. Hahn offers a radical proposal: commandeer Lake Hickory Health Camp, three miles outside of town. It has just one U-shaped stone building, erected by the Works Progress Administration during the Depression. It’s a “fresh air” camp on more than 60 acres of woodland, where underprivileged kids can enjoy the freedom and benefits of being outdoors. Dr. Whims has authority over the facility — their plans will not have to languish as they navigate weeks of red tape and approvals. Dr. Whims calls Mrs. Earle Townsend at the camp and directs her to send all the campers home within the hour. He organizes a convoy of cars to ferry the campers home. Then he enlists Mrs. Townsend as dietitian for the nascent Hickory Emergency Infantile Paralysis Hospital. 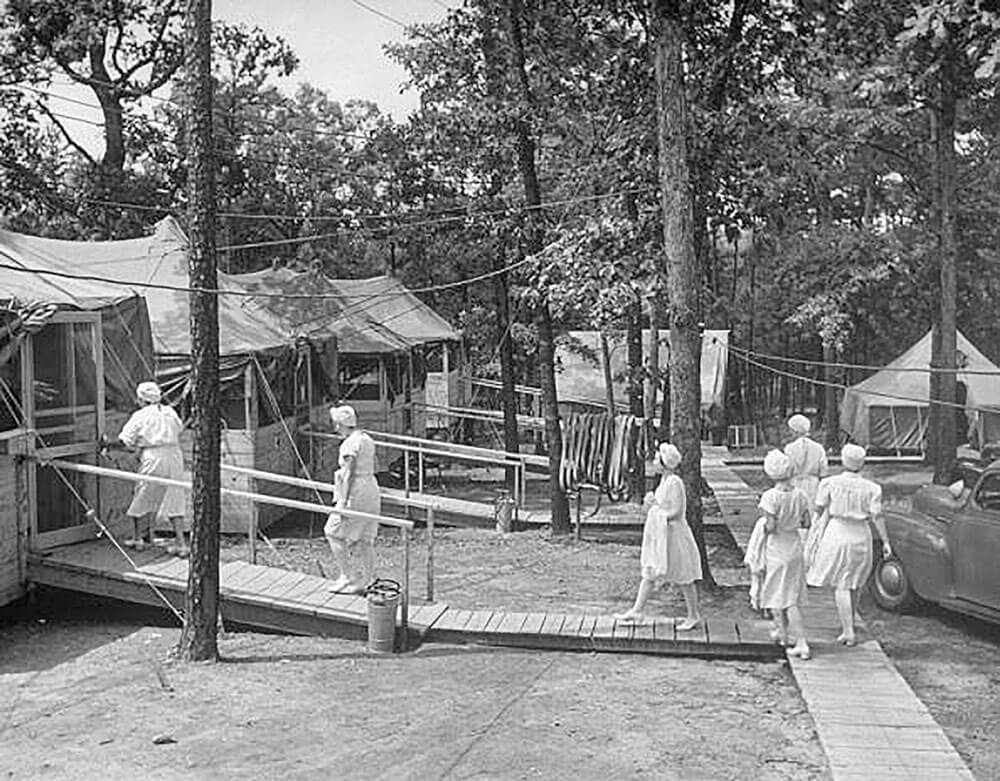 Life magazine came to Hickory to chronicle the town’s response to the polio outbreak. In this photo, readers got a glimpse of volunteer nurses reporting for duty at isolation units hastily built at Lake Hickory Health Camp. photograph by Alfred Eisenstaed/The Life Picture Collection/Getty Images

The three doctors each take on clearly defined duties: Dr. Whims supervises renovating the camp as a hospital and adding wards — first Army tents, and later, more durable wooden structures connected by boardwalks. Dr. Hahn finds supplies and equipment. Crabtree uses his national contacts to secure funds and recruit staff from all over the United States. Within weeks, the hospital fields a remarkable cadre of doctors, nurses, and therapists from cities like Winston-Salem, Philadelphia, and Chicago, and medical schools at Harvard, Yale, Johns Hopkins, and elsewhere.

Student nurses — known as “Angels of Mercy” — are recruited from nursing schools, bused in to work on weekends and days off, and, like other staff, boarded in the homes of local families for free. Police officers taxi them back and forth, and regular cab drivers work without pay. The school district lends a bus.

Dr. Whims must quickly find someone who can create a blueprint for a new hospital, so he calls on a team of local architects: Mr. and Mrs. Q.E. Herman. He lays out the challenge, then hustles them into his car for the fast ride out to the camp. The Hermans sketch plans for the facility on the spot, and construction begins that same day.

Truckloads of donated lumber and other materials arrive from Herman-Sipe, Hutton & Bourbonnais, and Cline Lumber Company. When it is used up, more trucks arrive with more lumber. Floodlights sprout on the building site so that work can continue after dark.

Carpenters, electricians, and plumbers all lend their expertise. Lawyers, dentists, secretaries, bankers — everyone pitches in, fetching and carrying, hammering and painting, cleaning up debris and hauling away trash, scrubbing and cleaning the old building. Prison work gangs hand-dig a three-mile water main conduit. A contingent from the women’s prison in Raleigh is granted temporary parole to staff the kitchen and laundry. 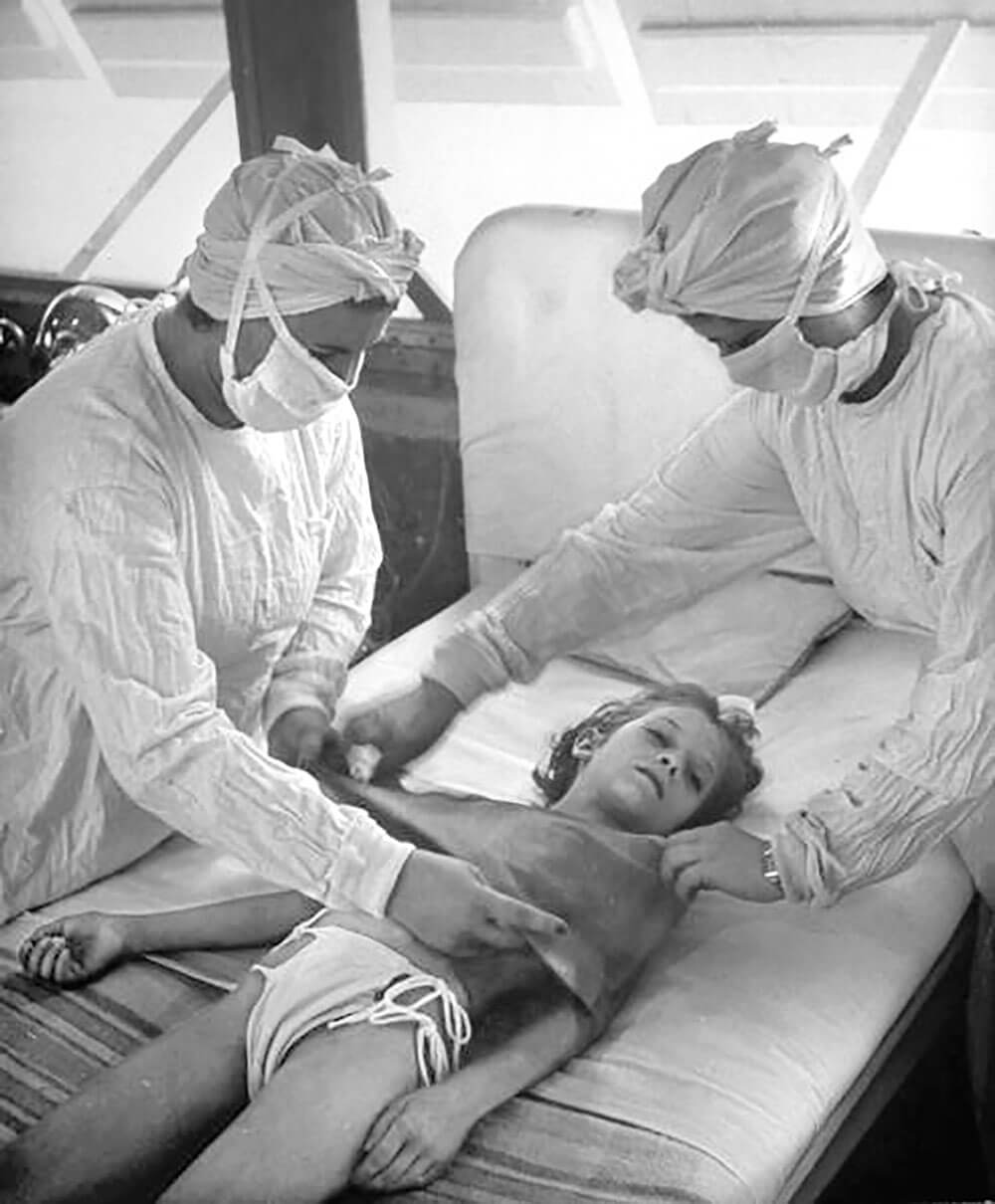 Radio station WHKY broadcasts a list of items the hospital needs: beds, cribs, washing machines, refrigerators, office furniture, sheets, even a can opener — and it all shows up, along with a small army of volunteers to staff the offices and comfort the victims’ parents. Farmers truck in fresh fruits and vegetables. Women deliver meals they have made at home.

From his old friend Col. Frank Wilson, in charge of Moore General Hospital near Asheville, Dr. Hahn finagles 55 Army hospital beds and mattresses. Rain dampens the efforts overnight, but the throng keeps working. In the morning, the Army beds arrive.

Signs go up: Arrows point to the hospital, and other signs warn that “All Visitors Must Receive Permission to Enter Ward Area.”

Fifty-four hours after the architects complete their hasty sketches, the first patients are admitted to the sudden hospital. And they keep arriving — in private cars and ambulances. When the ambulances are all taken, they come in hearses lent by local undertakers.

The public health officials make an early, crucial decision: treatment will be color-blind. The next patient — white or black — gets the next bed.

They procure iron lungs that use changes in air pressure to inflate the lungs of patients — the only treatment that can save a polio victim with paralyzed breathing muscles. With luck, the stricken children will progress beyond paralysis and escape the iron lung after a few weeks or months.

The treatment is as humane as can be managed with such a debilitating disease, and includes Kenny treatment massage and hot packs: strips of woolen blankets boiled in water for 20 minutes, wrung dry, then wrapped around the stricken limb. The aroma of boiled wool is one that many patients will remember for a lifetime.

When no longer needed by the patient, the woolen hot packs are burned. No garbage or medical waste is allowed to leave the facility.

During the next nine month, the staff of the Hickory Emergency Infantile Paralysis Hospital treats 454 children afflicted with polio. They do not save all of them: 12 die, and many more are paralyzed, some permanently. Although the death rate is remarkably low, Hickory can’t escape being called “Polio City.”

For the March of Dimes — which brags about Hickory on its posters — and in magazines around the country, the hospital becomes “the Miracle of Hickory.” 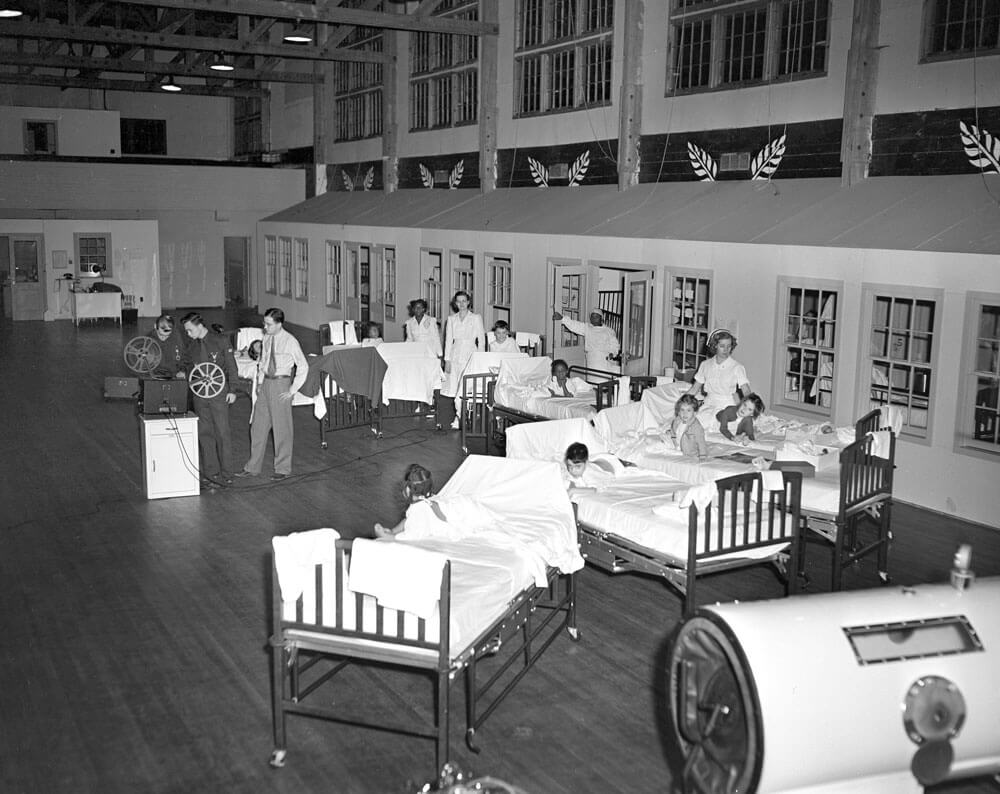 The 1944 polio outbreak is not the last for North Carolina. In 1948, the virus strikes again. In Greensboro, the Army Overseas Replacement Depot is converted to a makeshift hospital, where children are treated regardless of race. photograph by Carol W. Martin/Greensboro History Museum Collection

But “miracle” implies a kind of magical happening, a supernatural intervention. In fact, the successful effort to save so many children comes about because of a series of brave and timely decisions. It comes about because of determination and a willingness of people to share what resources they have in a time of scarcity. And it comes about out of community pride, out of an old-fashioned American spirit of can-do, and out of abundant compassion. It is precisely the opposite of waiting for divine intervention: Ordinary people work together to save the day themselves. The people of Hickory turn a nightmare emergency into a shared legacy.

“Polio City” — once a moniker of fear — becomes a badge of honor.

On March 5, 1945, with the worst of the crisis past, Hickory transfers its remaining patients to the hospital in Charlotte.

Scarcely a month later, on April 12, President Franklin D. Roosevelt — the secular saint of polio victims — dies at “the Little White House” in Warm Springs, Georgia, where he sought treatment for the disease. The train carrying his body back to Washington stops over in Charlotte the following evening for a crew change and to take on fresh flowers. The flowers that accompanied his casket thus far on its journey are given to the children in the polio wards of Charlotte Memorial Hospital — some in full bloom, some still just buds.