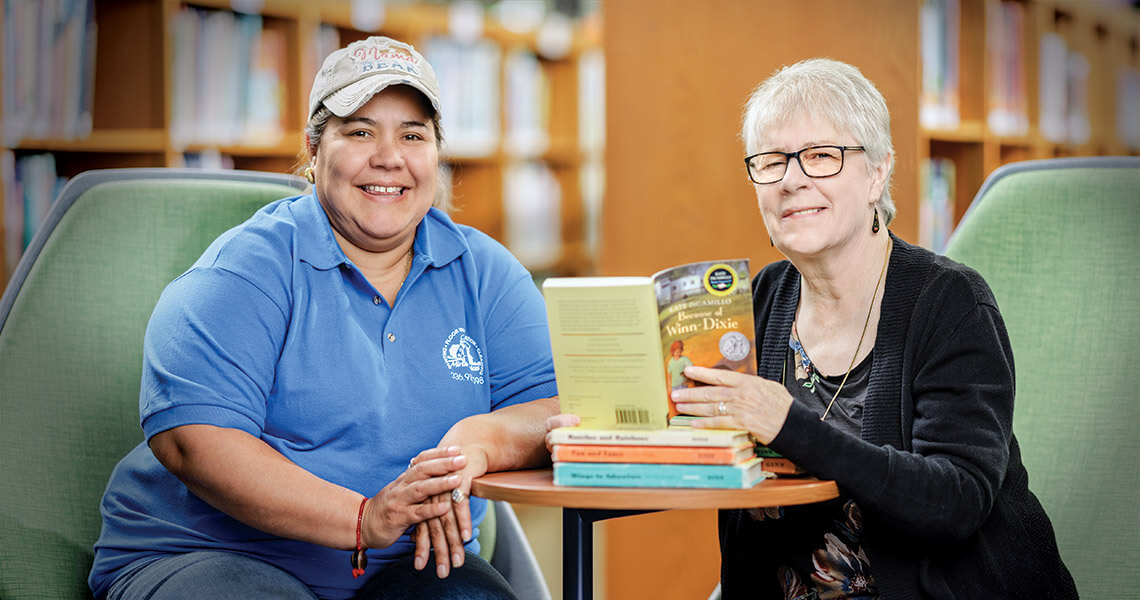 To strengthen her weakened right side — the result of complications from surgery in 2011 to remove a large, tentacled brain tumor — Cindy Martin and her husband, Wayne, took walks every morning in downtown Mount Airy, visiting Barney’s Café for oatmeal that “was just like my mother made it,” Cindy says.

Mirta Betancour worked as a dishwasher at Barney’s. She always stopped by the Martins’ table with a hello, a smile, and “something funny to say,” Cindy says. Mirta came to North Carolina from Mexico at age 14. She was born on the streets, lived on the streets, never had a birthday party or celebrated Christmas. To survive in the United States, she’d worked on a tobacco farm and in a glass factory. Her husband, Silviano, worked on the tobacco farm and then at a lumber mill.

One morning at Barney’s, someone asked Mirta to write something down. Cindy saw the expression on her face. “I can’t read or write,” Mirta confessed. “Do you want to learn?” asked Cindy, a retired language arts teacher. “I spent half my life teaching people to read and write.” Mirta did. Thus began a remarkable relationship.

For the next two years, the pair studied together every day. At the library, at McDonald’s, at their homes, over the phone. They began with the same My Little Red Story Book, a Ginn Basic Reader, that Cindy, who’s 66, learned to read with. See Tom ride. Tom can ride a pony. Tom can ride fast. “Mirta learned quickly,” Cindy says. “She had such a great attitude.” A big motivator was that Mirta was about to become a grandmother. This child is going to be educated, Mirta told Cindy.

Level by level, Cindy brought her student through eighth-grade books. The first chapter book Mirta read was Because of Winn-Dixie by Kate DiCamillo. When DiCamillo was scheduled to appear in Winston-Salem, Cindy secretly contacted the author and told her about Mirta’s story. At the event, DiCamillo singled out Mirta — “You must be Mirta!” — and gave her a hug. “Out of all those people, she knew me!” Mirta says.

A happy story, to be sure, and it has a storybook ending. Five years ago, Mirta opened her own business, Mirta Services. Today, she employs 15 people, including her husband. They retile, paint, and restore houses for resale, as well as clean out homes after the owners have moved or died. Books that Mirta would have once thrown away, she now keeps or gives to Cindy for the downtown lending library that she and Wayne stock.

Mirta Services has a monthslong wait list, but clients don’t mind. “They want her,” Cindy says. “She’s honest and works hard.” Cindy’s fridge bears a photograph of the duo in matching “Reading Gives You Superpowers” capes. They’re still in touch, every day.

Cindy Martin’s brain tumor left her totally deaf on her right side. She must be careful swallowing, and her right eye can no longer make tears. But she’s not bitter or angry. Cindy’s a survivor. She’s a giver. She’s a teacher. And she’s an Our State reader.