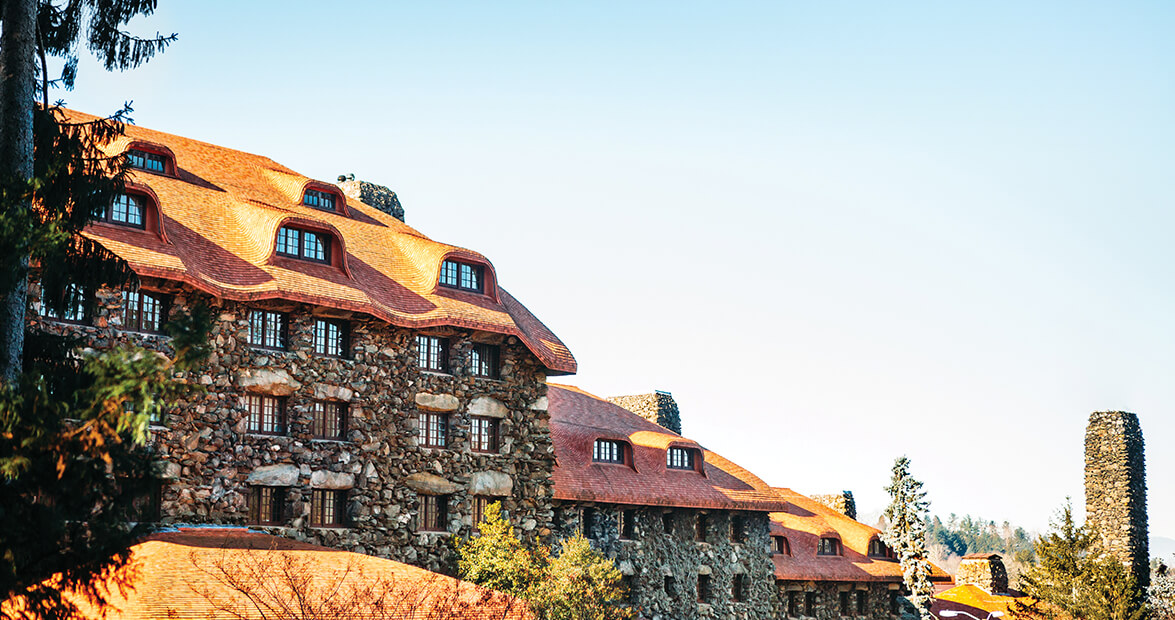 “It’s like a party,” my wife says, looking around. “I guess that’s what a resort is.” We’re sitting on the terrace — one of the many terraces, really — of The Omni Grove Park Inn in Asheville, and there are people everywhere: eating, sipping cocktails or hot chocolate, walking back from a late round of golf, a few straggling up from the spa. My wife’s a few sips into a dirty martini. I’m working on a bourbon. It’s late in the day, late enough that the first and second seatings of dinner have taken place. The sun’s going down over the mountains, and a bell starts ringing up in one of the restaurants — yes, they ring the bell for the sunset here. It feels like the whole place turns out to watch the sun go down, which it well should. Tonight’s sunset drops through the lees of a squall 10 or 20 miles away, gray-on-gray clouds banking up in the valley that runs out toward the city, pink and orange light spilling out everywhere around.

We’re late. We thought we’d done it wrong, made our reservations at all the wrong times, but everything’s working perfectly. Time your cocktails to most everybody else’s dinner, and what you get is a seat right there at the edge, which makes it feel very much like you’re inside the sunset, or part of it, or you’re one with the mountains, or something, though maybe that’s the spa talking. We’d been to the spa. More about the spa in a moment.

What I need to say before we go any further, before I fail to explain the feeling of history in every square foot of this hundred-year-old place, before I confess to the wedding we crashed, is this: This was the first night we’d ever spent away from the kids. In five years. Even if the spa and all the rest of it hadn’t happened, this would have been a great night. But, oh, friends, the rest of it happened. And looking back, I’m not surprised. You walk into that massive lobby, massive fireplaces at each end, massive logs stacked and ready for the fire, everything massive, trying for the scale of the mountains and amiably failing — you walk in there and tell me something magical isn’t about to happen.

I don’t like massages. I think. I’ve never had one; I’m not keen on strangers. For this my wife calls me a fool, and other names, but it was her early afternoon massage and my plan for a run that had us eating a lighter lunch of Carolina trout and then, yes, perhaps the most perfect biscuit on the planet, which arrived unbidden, wrapped in a white napkin, and was I just going to leave it there? I was not. That meal, like all our meals, like nearly everything that takes place at the Grove Park, faced off into the valley, and I want to tell you 10 different times about the 10 different kinds of light we saw, some filtered almost through cloth and others through glassine, but Asheville is Asheville: If you’re not fond of the sky you’ve got, wait six or eight minutes, and you’ll get a new one.

This is all so much about want to tell. This is a postcard. Having a great time. Will never be able to explain it all. So let’s skip my run through dollhouse historical neighborhoods (not flat! if your regular run is flat, recall that you are in hill country!) and straight to the moment when I’m meant to meet my wife post-massage, in the spa, which is down in what’s built to look like a cave and in most ways is a cave, except that it’s a cave filled with pools of every size and sort. And robes. And slippers. And herbal tea. And a million lights in the rock walls. And the idea that if you were already in another world before, above ground, then down here, you are yet one more step removed. 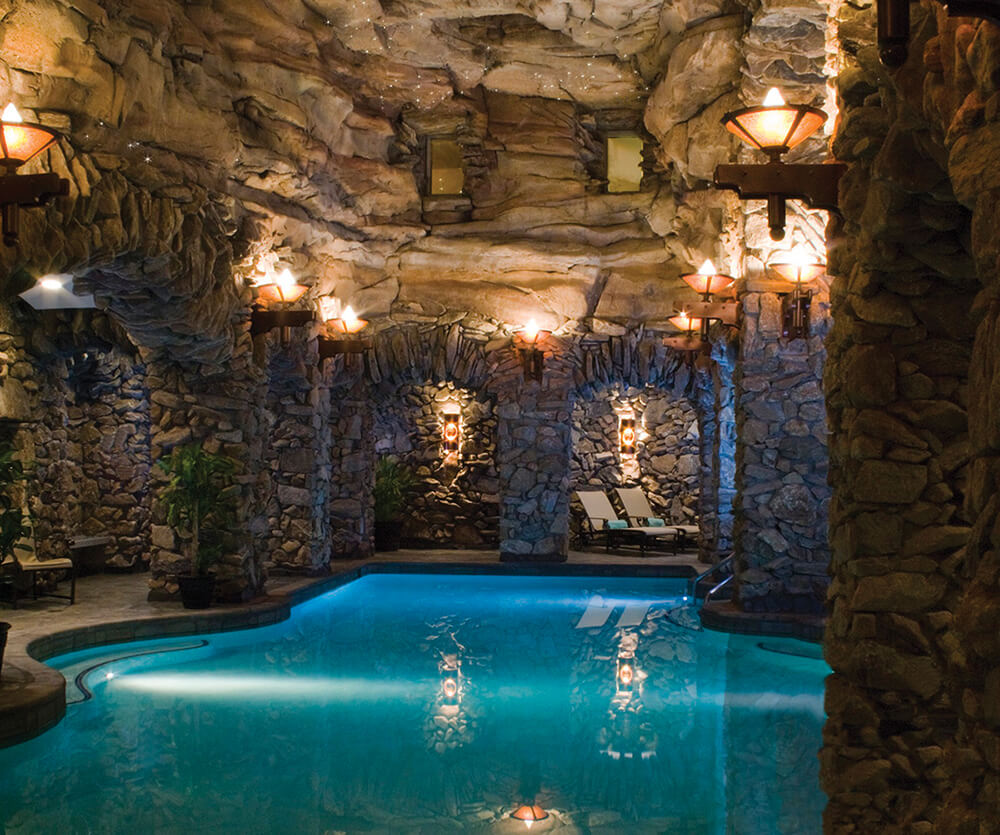 At the Grove Park’s spa, take a dip underwater and you’ll hear music; look up at the cavernous rock walls, and you’ll see stars. Photograph courtesy of The Omni Grove Park Inn. photograph by Tim Robison

About that massage: my wife is nonverbal, in the best of ways. We hang out first in a mineral pool, peppermint-infused iced towels over our eyes. (I would like to write that previous sentence three more times in a row.) Then we move through the grotto to the various hot tubs, most with waterfalls. We separate, go see what the men’s and women’s relaxation rooms are all about. We come back together to head outside — that view again — where it’s cold enough for pants and sleeves, except that the wind’s not blowing. We get in the outdoor whirlpool and then lie in the afternoon sun and get minor sunburns and continue not to talk much to each other. We talk plenty at home. At some point, she reaches a hand out for mine, and I take it. Sometimes it’s enough to know that someone else is there, that you’re not floating away.

We land at Vue 1913, Grove Park’s upscale bistro, for a fairly late dinner, which turns out to net us a conversation with Chef James Lumley before he heads home to his own young family. He’s a man excited about food, and he should be — I’d do better to tell you that he grows microgreens in the loading dock of his restaurant than to try to describe how beautiful the food was. “You don’t even realize you’re so disconnected until you do this,” he says, by which he means work at a place like this, in a community like this. “I know my grit maker. I’ve seen lambs two hours old. I forage mushrooms from front yards. My cooks learn to care about things. It’s kind of a trendy thing, but it’s not trendy here.” He’s sitting on the windowsill. He’s wound up. Even the tables are local, he tells me. Anything he can get his hands on is. “We’ve got tons of stories around here,” he says.

And it’s his voice in my head, his excitement, plus maybe a little prosecco, that I’m hearing as we walk down the huge hall, bearing every intention in the world of going back to our room. We’re tired. It’s past 11. But now there seems to be early-1980s Michael Jackson coming from a stairwell. We duck down to see what that’s all about, and what it’s about is a wedding reception in its final throes, a wedding we’d seen earlier from our cocktail perch. The bride and groom are still hanging on for the party. Everybody on the dance floor looks like younger versions of the selves we imagine we once were. And then the bride locks eyes with my wife through the doorway, and we’re just barely dressed enough for this, and she’s waving us in, and we do indeed dance the night away.

We wake up at 10 the next morning. Ten-fifteen, really. We have something like 11 seconds to find our shoes and sprint for the elevators and beg our way into the last of the breakfast buffet before it flips over to Sunday brunch. It is there, looking out over that valley one last time and, yes, nursing a cup of coffee, that we take a breath. Clink our mugs together. It feels like we’ve gotten away with something. More than one something. I can still feel the hot tub, can still see the sunset. I recall that after the reception ended, everyone spilled upstairs to drink a last beer in the Great Hall, fires roaring at both ends. It is like a party. My wife is right. It’s a party you very much wish would never end.