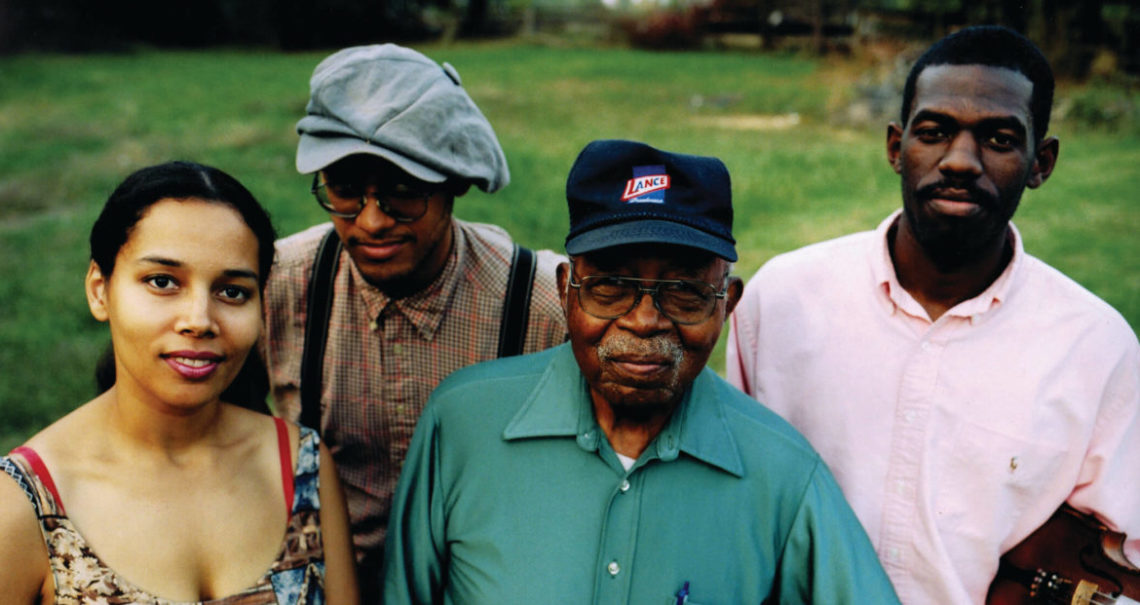 EDITOR’S NOTE: This story was originally published in September 2007.

The rhythm of the music makes your ears perk up, and before you know it you’re clapping in time. The beat clips along lightly with a tune that has been played for generations. Although you might not hear it often, the sound of old-time country music is familiar. It’s a harmony only a banjo, fiddle, and harmonica can bring when blended together. Add a jug, snare drum, and stovepipe, and you have the makings of the Carolina Chocolate Drops, connoisseurs of old-time string-band music.

Joe Thompson should know. He’s the oldest living black Piedmont string-band master in North Carolina. “I have been playing the fiddle ever since I was a little boy,” he says. Now at age 88, Thompson couldn’t have found a more talented or appreciative trio than the Carolina Chocolate Drops. Deriving their name from a black string band from the 1920s, “The Tennessee Chocolate Drops,” the group in the past year has taken the folk festival arena by storm and, in the process, has brought to thousands a style of music that was in danger of vanishing with Thompson’s generation.

Dr. Cece Conway, English professor at Appalachian State University and author of African Banjo Echoes in Appalachia, met cousins Joe and Odell Thompson while working on her Ph.D. at the University of North Carolina at Chapel Hill in the 1970s. “I was a graduate student and had a small grant which enabled me to work on a documentary on black banjo and fiddle players,” she explains. “There were a lot of white old-time fiddler players at the time but very few black musicians.”

Conway is pleased that the young trio has such a respect for Thompson. “He’s the last traditional black fiddle player from an unbroken line going back to Africa,” she explains. “There were no black young people learning his style of music until the three met Joe at the Black Banjo Gathering at Appalachian State University in 2005. Practicing with Joe allows them face-to-face contact to experience the cultural context and meaning of the music as well as its sound,” she adds.

Drawn to the music

Thompson’s influence blends with other string-band music, bluegrass, and the blues to give the Carolina Chocolate Drops their distinct sound. Two of the members, Justin Robinson and Rhiannon Giddens, are native North Carolinians. Robinson is from Gastonia, and Giddens grew up in Greensboro. Dom Flemons, originally from Phoenix, Arizona, moved to North Carolina in 2005 after attending the Black Banjo Gathering. It was there that Giddens met both Robinson and Flemons.

Giddens grew up listening to the folk revival and was exposed to old country music and jazz by her grandparents. Trained as a professional opera singer, she is a graduate of the prestigious Oberlin Conservatory of Music in Oberlin, Ohio. While she was singing classical music professionally, a college friend invited her to attend a contra dance, where couples line up and complete patterns dictated by a caller. “I went because I thought it was going to be like the English country dances in Jane Austen [novels],” she says with a laugh.

But it was at this dance that Giddens found her love of string-band dance music. She then began thinking that maybe opera just wasn’t where she was supposed to be. Her resonant voice now sings songs like “Hit ’Em Up Style,” about a lady getting revenge on her faithless lover.

Robinson grew up with a diverse music background, heavily influenced by his grandparents’ tastes. “My grandparents loved country music and never missed ‘Hee-Haw,’” he says with a smile. “My grandmother loved Grandpa Jones. Also Earl Scruggs was from Gastonia, so you couldn’t throw a rock without hitting a banjo.”

On the other end of the spectrum, Robinson’s mother sang opera. He took classical violin from age 9 to 13. “I liked listening to classical music, but I didn’t like playing it,” he admits. “When my parents told me they weren’t going to pay for any more lessons if I wasn’t going to practice, I thought, ‘Thank goodness my plan worked,’” he says.

Years later, while attending UNC, Robinson picked up the fiddle to play string-band music. He learned about the festival at ASU from a website. “I saw that Joe Thompson was going to be there, and off to Boone I went,” he recalls.

Growing up in Arizona, Flemons listened to a mix of smooth jazz and country music. He often heard Buck Owens and Charlie Daniels while riding in the car with his father. With a passion for music of yesteryear, Flemons is the rhythm master of the band, playing the harmonica, snare drum, bones, jug, and stove pipe. As a boy, he played the drums and percussion in the school band and picked up the guitar and harmonica at age 16. “I just got the bug one day and started playing them both,” he explains.

Flemons immersed himself in different styles of music during college and became a self-taught banjo player. Playing solo and working as a street singer, he traveled to North Carolina during his last semester of college for the Black Banjo Gathering. “I decided after seeing all that talent — including Joe Thompson — I was moving to North Carolina,” says Flemons.

That weekend at the , fate took over and the trio’s paths crossed. “I met both Justin and Dom at the festival, but they didn’t meet each other,” explains Giddens. Not long after that, the three moved to Durham and started visiting Thompson on a regular basis, absorbing everything they could. “By visiting Joe at the same time, we clicked into a sound,” explains Robinson.

During the summer of 2005, the three visited with Thompson often. “I was in awe and starstruck when I went to visit him the first time,” admits Robinson.

Giddens echoes Robinson’s sentiment. “He’s a treasure,” she says of Thompson. “We’ve never stopped learning from him. Each time we’re with him, there’s something for us to learn. Just to watch him and hear him play and sing is a gift to us as musicians.”

“By the ’70s, black string music had lost its context,” explains Robinson. “The reasons it was played had been lost. String music was played for social dancing and at occasions like barn raisings, corn shuckings, and weddings. After World War II, blues and jazz took over. People started moving to the cities. Things changed. There was less and less reason for the string bands to continue. It was not part of the mainstream.”

But the mainstream didn’t matter to Thompson, who continued to play his Piedmont string-band music. After folklorists like Kip Lornell and Conway and white string-band musician Tommy Thompson started visiting, Joe began making music with his banjo-playing cousin, Odell. They were soon invited to play at festivals and eventually played at Carnegie Hall and in Australia and toured nationally until Odell died in 1994.

“We have really spent a lot of time with Joe, watching his hands, listening to his sound, and following his beat,” explains Flemons.

These sessions would sometimes last as long as five hours. “Joe never seemed to get tired as long as we were playing,” says Giddens.

Even with the benefit of these visits, the group took a while to get everything together. “It was a crazy time,” says Flemons of their early months together. Performing as street players in Chapel Hill, they received their first paying gig at the Arts Center in Carrboro in January 2006. After that, things took off rapidly, and they began booking concerts across the state and throughout the region.

Their travels now take them around the country, and in June they performed on “Prairie Home Companion.”

They’ve also become popular with schools. “We visit elementary and middle schools to share the history of the music with children and let them learn it first hand,” explains Giddens. She laughs when she thinks of some of the middle schoolers they’ve entertained. “At first, they sit slumped in the chairs and look at us like we’re crazy in our simple clothes and making music from a jug and a banjo. But we have incorporated a type of hip-hop song for them so they can understand what they listen to now had its roots in music their ancestors played.” Giddens has been known to grab a couple of girls up on stage and teach them the Charleston while Flemons shares his talents making music on the jug.

Marshall Wyatt, owner of Old Hat Records, met the trio at their performance at the North Carolina Museum of History. His company specializes in rereleasing Southern string-band music from the ’20s and ’30s. Having researched this style of music for more than two decades, Wyatt says the three young musicians bring something special to the music they play. “They have an infectious kind of energy; every time I go to see one of their performances, they get better,” he says. “They give a new lease on life to this music.”

The group has immersed themselves in the history of the style of music they perform. All three are a wealth of information about the historical context of their music. “They’ll drop by, and we’ll spin old 78 records until well into the night,” laughs Wyatt. “Once, Justin asked me where all the records were of Gaston County musicians, and I showed him what I had. He suggested I put together a collection of their music, and I’m working on it. They’re curious and keenly aware of the music they play.”

The group’s undeniable energy shows in their concerts. They converse with the audience about the songs they’re performing. They play off each other with ease, exchanging barbs as fluidly as they exchange instruments. As they play the tunes Thompson taught them, like “Georgie Buck”, you see the music weaving generations together. Blowing into the jug, Flemons sets the rhythm for a song while Giddens launches into the lyrics with her rich, full voice and banjo playing. Robinson can make the fiddle sing like few others. Before long, a grandfather in his 80s starts dancing to the music while a 3-year-old joins in with her mother, clogging right along as Giddens dances on stage. Not bad for a musical style that, in the mid-20th century, had come close to dying.

“When we play, we want the audience to have that old-time feeling, just as when the music was played for Saturday night dances,” says Robinson. “It’s a time for them to enjoy something simple and pure.”

Giddens agrees. “Like the musicians of Joe’s time, we bring our own separate talents to the band. And, just like in those days, there’s nothing we enjoy more as musicians than seeing an audience responding to music that Joe played for his friends in Mebane,” she says with a bright smile. “It’s nice to know the Carolina Chocolate Drops had a hand in making it come full circle. It doesn’t get much better than that.”