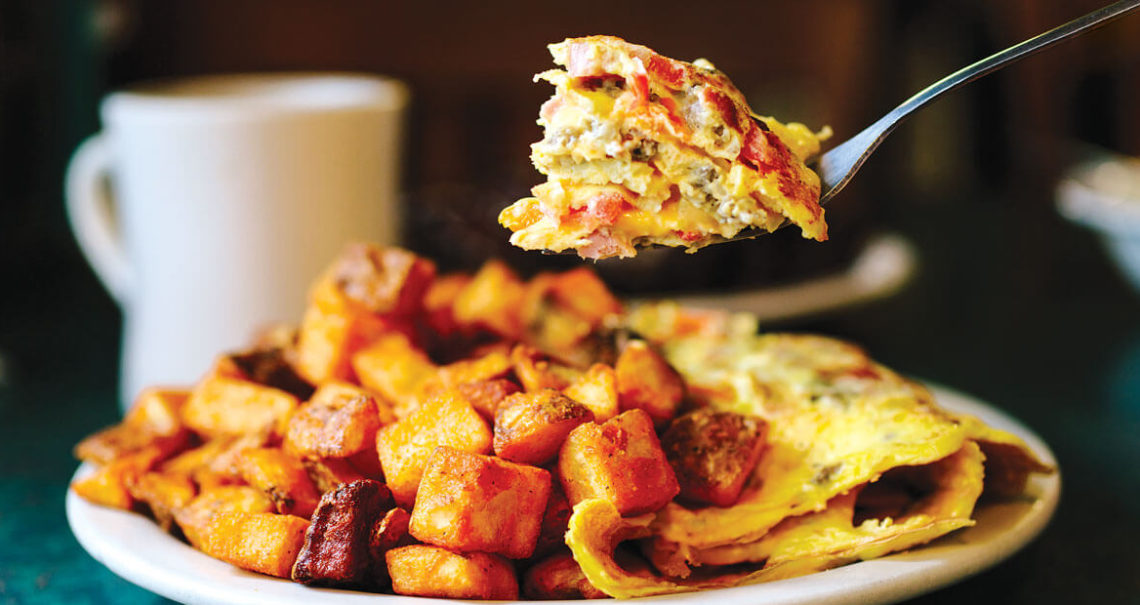 From his spot at the grill, Bob Hubbard can see them all: the carpenters and veterans and shrimpers, the retirees and cops and hippies, literally every customer, which is how he prefers it. He also likes to see and touch each plate before sending it across the counter — “the basis of good customer service,” he says.

The one thing you can’t be at The Original Salt Works is invisible. If you’re a regular and miss a day, you can trust that Bob will track down your phone number and check on you.

“It’s a very ‘regulars’ kind of place,” he says. “We have families who’ve been coming here for three generations. Vacationers who stop in because their grandparents used to come. We have people who eat here eight days a week.”

“Actually, the first time you go, you’re a regular,” says Rebecca Lee, a local professor. Her 15-year-old daughter is also a fan, because on Sunday, she notes with wonderment, you can wear a swimsuit or church clothes, and nobody cares. 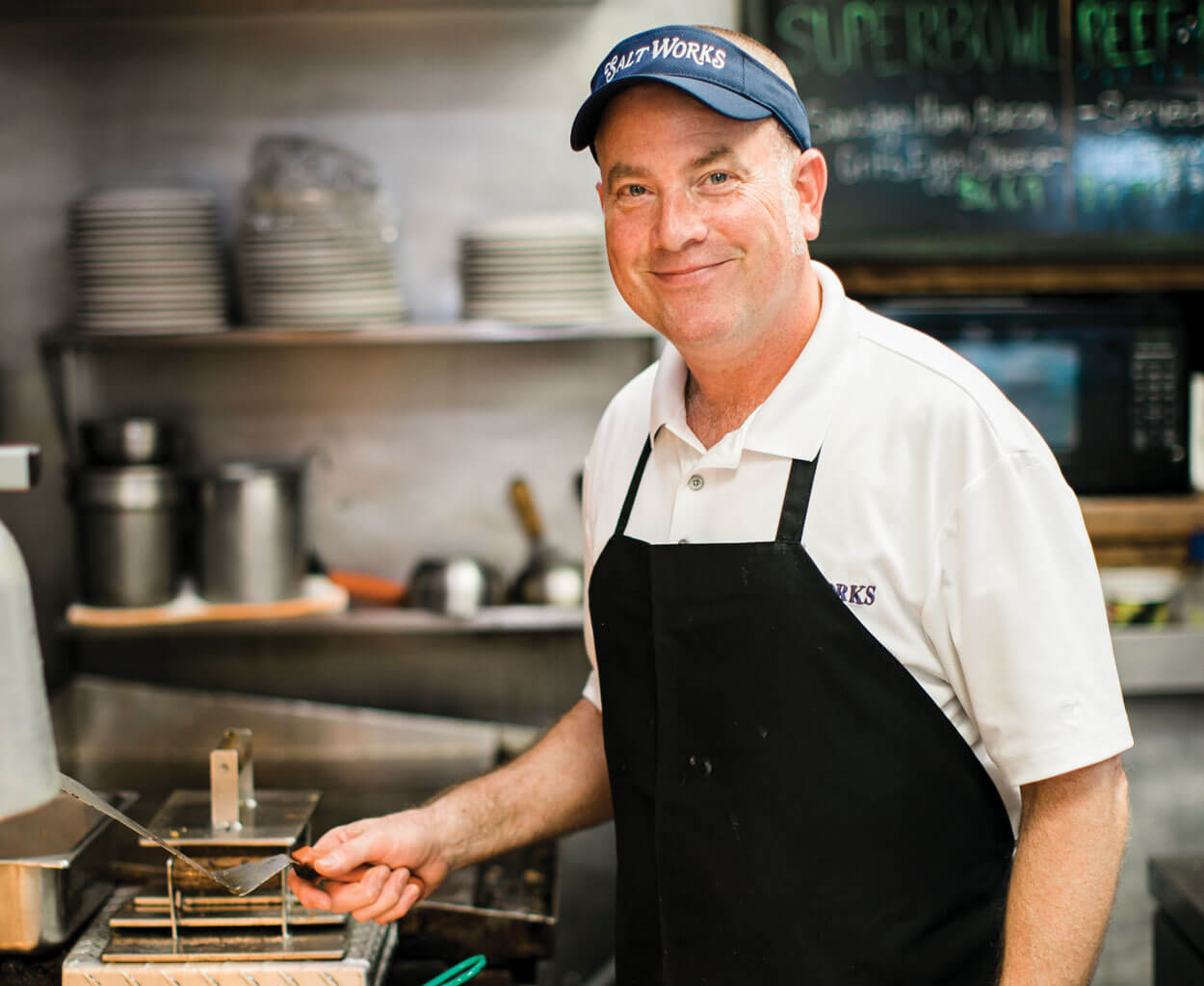 Bob Hubbard doesn’t have a cell phone or an email address, but his connection to the community runs deep.

Before Bob bought Salt Works in 2003, he did time on the corporate side, including yeaars served as a district manager for Waffle House and Wendy’s, as well as early jobs at resorts in Wrightsville Beach and Asheville. Finally, he says, he longed to “get out from behind the wall,” to see and greet and get to know the people he cooks for.

With “maybe 1,000 square feet” of dining space, according to manager John Cobb, Salt Works operates with a small, loyal crew of servers and kitchen staff. The little building has quietly stood its ground for decades, maintaining a relaxed diner atmosphere since its inception as a soda fountain in the 1950s and its reopening as The Original Salt Works in 1973. Since Bob bought the place, he’s made only modest and necessary changes: “I just took over something good and tried to make it even better,” he says.

By 9 a.m. most weekends, a line of hungry customers snakes out the door. Fried bologna sandwiches and strawberry-dotted Belgian waffles the size of small birthday cakes fly across the counter, delivered by peppy young women in blue jeans and ponytails. Bob’s special house omelets, especially popular on cold mornings, are stuffed to overflowing with breakfast meats and veggies. Sometimes he goes a little crazy with portion size for a regular, or for anyone who looks like they need it. One early-morning regular recalls a breakfast sandwich Bob once made him, taller than a triple-decker and leaning like the Tower of Pisa.

The one thing you can’t be at The Original Salt Works is invisible.

Menu items are traditional and familiar, yet enhanced by Bob’s laser-like personal attention and the care that he emanates even when he’s too busy frying, flipping, and grilling to hold a conversation. The slaw and chili that top the hot dogs are homemade, as is Bob’s chicken salad. The baby lima bean soup recipe was passed down from the restaurant’s first owners and is a secret. The cheeseburgers, Bob’s personal favorite, are all that a burger snob could hope for, though there are a few limitations due to space — cheese options are “American or American,” Bob says with a laugh. Still, the menu offers something for everyone, including Maggi’s Meatless burger, named after Bob’s mother-in-law, a vegetarian.

In warmer months, the crowd outside can sit at picnic tables under the century-old live oak tree, which dwarfs the restaurant in size and is so beloved that a woman once camped out in it for three days to save it from getting cut down. The peaceful vibe is odd and a bit magical, given the restaurant’s roadside location at one of Wilmington’s busiest intersections. Yet the squeak and slam of the screened door; the plain open kitchen; the cozy, pine-paneled, bacon-scented warmth feel for all the world like your family’s old beach shack. 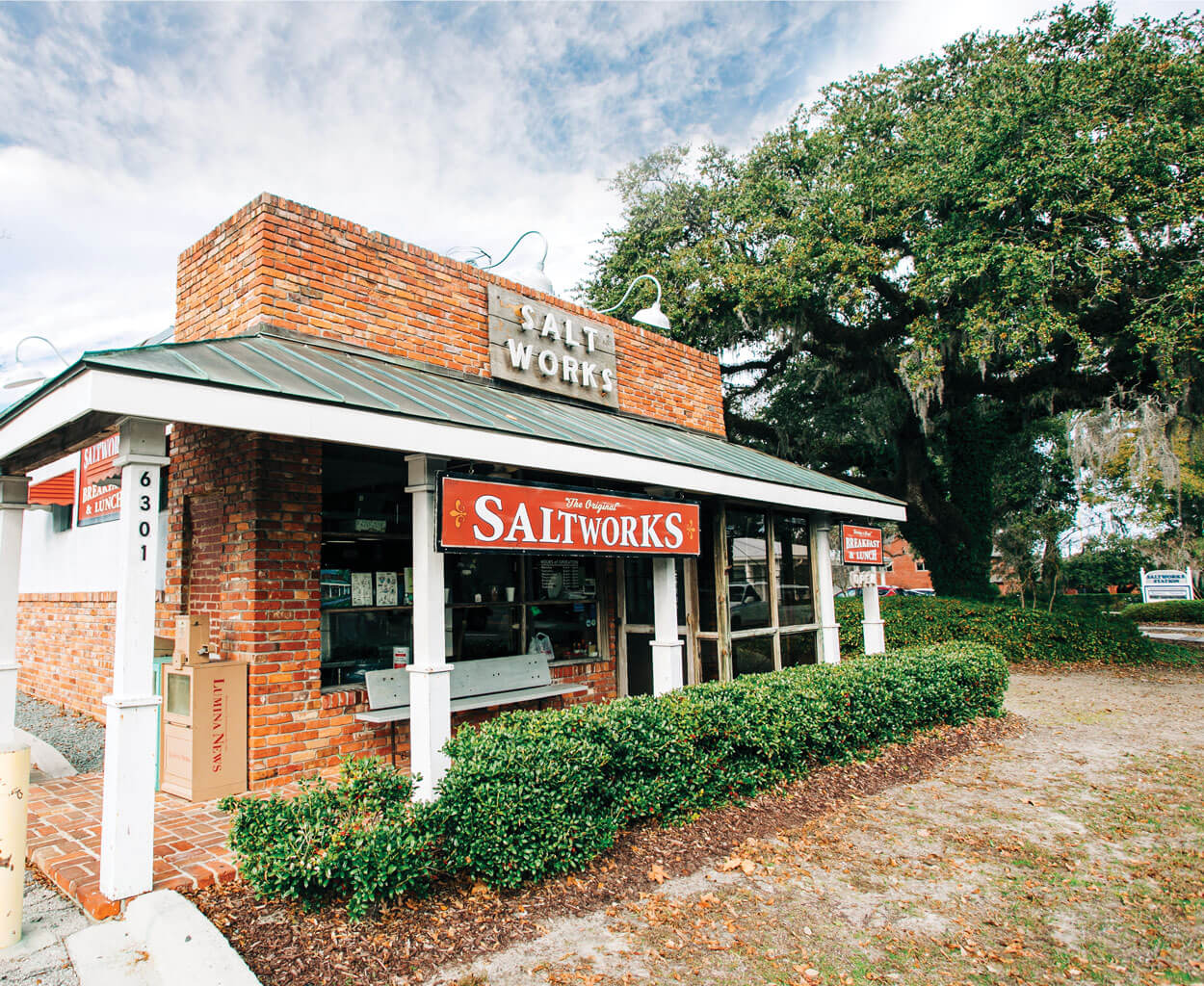 At this tiny diner, you are served food with a personal touch.

The walls are crowded with framed photos of friends and boats and baseball teams, license plates and duck decoys and sports trophies, and, amid all of this memorabilia, a good many tributes to Bob himself, including a plaque from the North Carolina State Highway Patrol, thanking him for his friendship and declaring him an Honorary Trooper. For his part, Bob’s not the bragging type — and anyway, he’s too busy cooking for his ever-growing circle of friends.