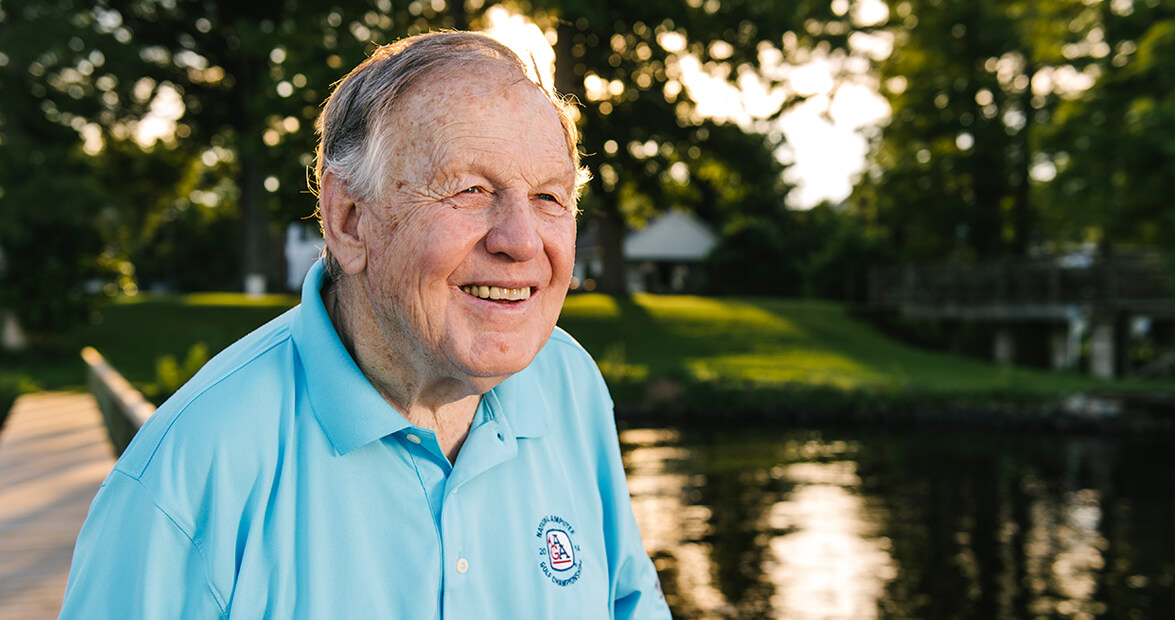 Editor’s Note: This profile was originally published in the November 2016 issue of Our State. Rev. Corbin Cherry passed away on October 13, 2018, at the age of 80.

In the beginning, there is the river.

Before the sun starts its slow climb toward the clouds, it lingers awhile, peering over the eastern edge of the Perquimans, infusing the silvery surface with rose-colored ribbons. The river reflects this first light, announcing the dawn.

The builders who added an upstairs deck onto the Rev. Corbin Cherry’s historic waterfront home installed shutters in his bedroom to block the scalding sunrise. But the retired minister, who reveres the river, asked the workers to notch a small square out of the wooden slats, so he could awaken to the watery glow.

Each morning, with his head still on his pillow, he watches the ripples in the river, fish jumping, ducks diving, the world coming alive.

And he thanks God for another day.

“I’ve been all over the world,” says Corbin, 78. “But the sunrises are never as good as they are right here.” 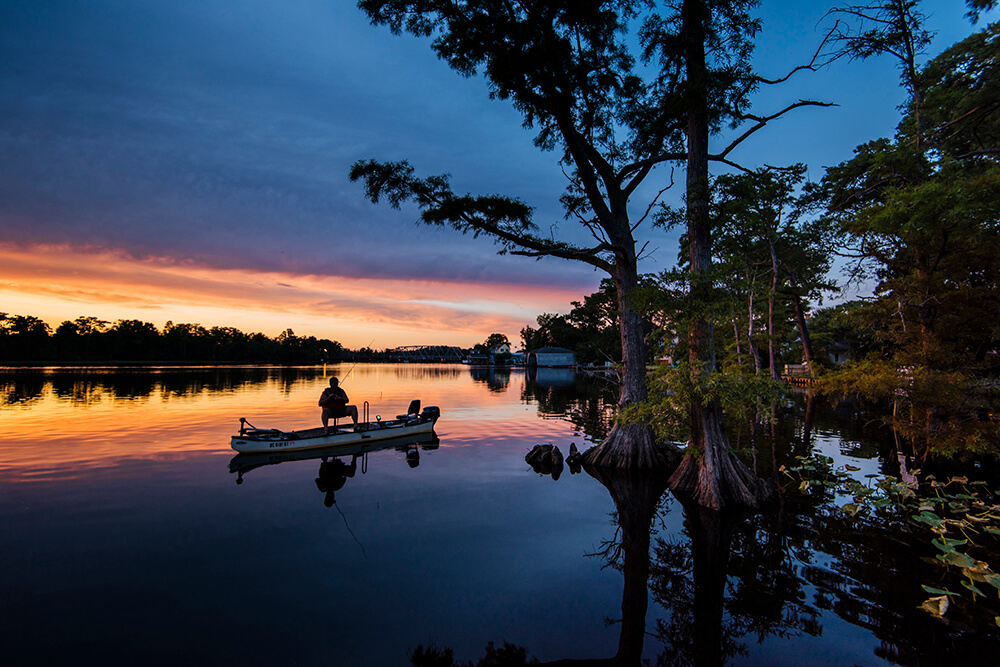 Before his stroke, the Rev. Corbin Cherry would fish daily on the Perquimans River. photograph by Andrew Kornylak

He was born by the river, and he always knew he would leave Hertford.

But even after he lost his leg in Vietnam; even after he was awarded three Purple Hearts; even after he buried soldiers, prayed with congressmen, led 7,000 military chaplains, dined with presidents, golfed with rock stars, counseled strippers, wrote seven books, and returned to the jungle to try to right wrongs from the war, he always knew that eventually he would come home.

He just never thought he would stay.

For his Grandpa Dozier, a tugboat captain, the river was his livelihood.

To his dad, the river meant survival. Corbin’s family lived in a house near the river. They had no car. They had a boat. To fish. To feed the family.

His father taught his boys to swim in that murky water, to paddle all the way across the two-mile bulge. He showed them how to net mullet; how to snare perch, rockfish, and bass; how to shoot geese.

Growing up, Corbin never talked about wanting to be a minister. At High Point College, he figured he’d learn to be a farmer. Or maybe a doctor. And he fell in love with golf. 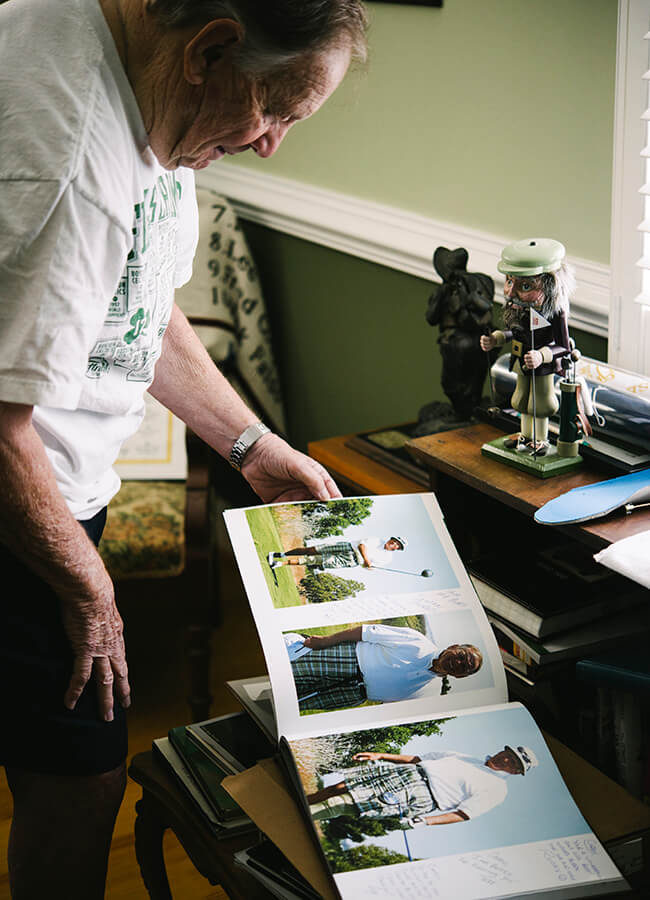 Photos of himself — as well as legendary golfers and celebrities — from his golfing days bring back fond memories for the Rev. Corbin Cherry. photograph by Andrew Kornylak

But when he was 19, his dad had a heart attack and died. Corbin came home for the summer to be with his mom, and wound up spending long hours with the minister at her Methodist church. During his senior year in college, he went to Europe to tour old churches, to learn about the origin of religions, and to volunteer in devout villages.

Corbin married a college classmate. Soon, they had a daughter. In the fall of 1961, he started seminary at Emory University. By the time he had earned his degree, and started leading Methodist congregations in Bath and Goldsboro, it was 1966 — and the Vietnam War had claimed thousands of lives.

“I signed up for the Army,” Corbin says. “I just felt like that’s where I was supposed to be.”

He was 28, a decade older than most of the enlisted “men” he was assigned to serve alongside, when he left his young family for a part of the world he’d only seen in the news.

Some chaplains stayed at base to counsel soldiers between missions. Corbin knew he was supposed to be out there on the front lines, where his boys were frightened and angry, some wanting to follow orders but not wanting to kill, others worrying that, since they had, they were going to Hell. Many were afraid of dying and wanted to run away. Some started doubting God.

“When you sit here and watch the water, you feel the current guiding you,” he says. “You understand.”

The minister counseled Christian and Jewish soldiers, agnostics and atheists. He baptized young men he barely knew in rivers whose names he couldn’t pronounce. In 11 months, he says, he prayed over way too many body bags — and only slept five nights in a tent. The rest of the time he was in the jungle, his backpack filled with tin-can meals and at least 20 small Bibles.

“We got ambushed one day by the Viet Cong. We dropped to the ground, and a round went into my backpack,” he says. Instead of hitting him, the bullets pierced the Bibles.

Months later, they were breaking camp in the A Shau Valley when gunfire spat through the trees. As Corbin ran toward an injured soldier, he stepped on a landmine. He smelled powder, looked down, and saw his left leg dangling below the knee. “All I could do was take my knife and cut it off,” he says. “And tie it up with my bootlace to stop the bleeding.”

A sergeant shouted to see if he was alive. “I’m okay,” the minister yelled back. “But how am I ever going to play golf on one foot?”
The Army flew him to Japan, then to Walter Reed Army Medical Center in Maryland. He was still a patient there when he began wheeling himself around the hospital to counsel maimed soldiers. There, even more than in the jungle, he felt he could help.

“God kept you alive, and brought you here for a reason,” Corbin told the troops. “God gives us choices. He gives us good days and bad. And the freedom to do what we will with that.”

President Richard Nixon wrote Corbin a letter that still hangs by his desk: “Even in your own suffering you are still ministering to others.”

Corbin says his wife didn’t understand. The war had taken his leg, but it had also given him direction. So many hurt soldiers needed him. He and his wife divorced, and he saw his young daughter on weekends.

After being discharged from the hospital, he kept counseling injured troops.

“God takes us places,” he says now. “Sometimes you don’t know why.” 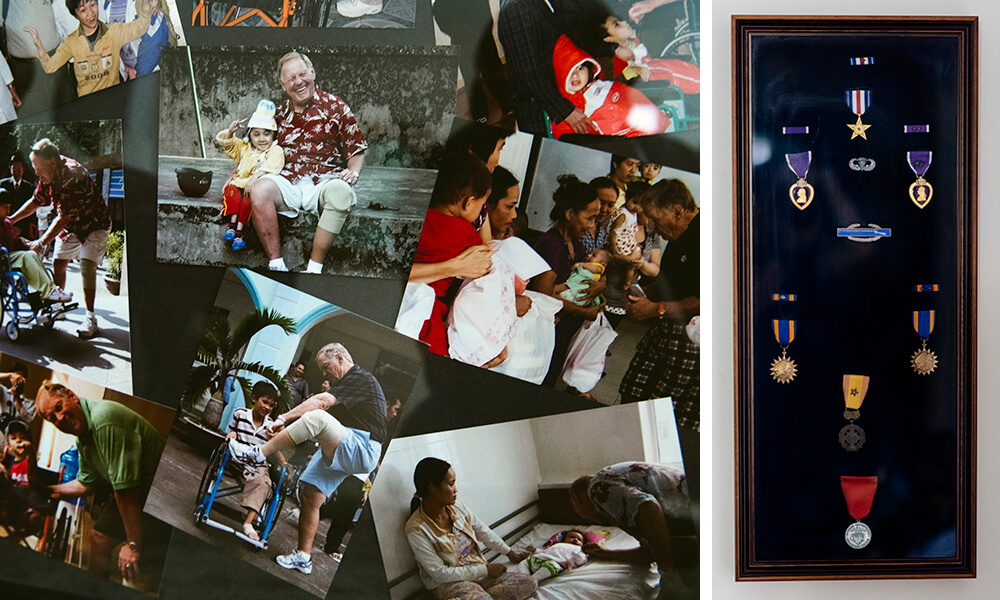 Vietnam memories: images of Corbin with local children, beneficiaries of the charity he founded, and medals — including two of his Purple Hearts and a Silver Star — from Corbin’s service in the war. photograph by Andrew Kornylak

As soon as Corbin learned to walk again, he got back on the golf course, figured out how to swing while balancing on his right leg. In 1971, he shot his first hole in one. Within a few years, he was playing 36 holes a day — without a golf cart — scoring as low as 62 with a 2 handicap.

He golfed with caddies and generals, with amputees and amateurs. He biked across Great Britain and Spain. He taught himself to ski and play guitar.

He was skiing in California in 1977 when he got the call: Would he come back to Washington, D.C., to serve as the Director of Chaplain Services of the U.S. Veterans Administration? He would oversee 7,000 other chaplains, from many faiths and every branch of the military.

Of course he went, and served for five years.

He hugged President Jimmy Carter in the White House. Led the U.S. House of Representatives in prayer. Spoke at more funerals than he cares to count.

Many of those funerals were at Arlington National Cemetery. Because Corbin received the Silver Star and three Purple Hearts, he can be buried there, too. Until recently, that was his plan.

The 1980s took the minister into the alleyways of San Francisco. He played in a band that performed at VA hospitals, and, through fellow musicians, he met a bar owner who said his staff needed counseling. “So I worked with bartenders and dancers, drug addicts and AIDS victims,” he says. “I started a street ministry.”

But it was golf that showed him his next path. In 1983, he was the only amputee to qualify to play in the U.S. Open. Other amputees watched in awe — and thanked him for showing them what was possible.

Years later, during a golf tournament in Southern California, someone introduced Corbin to a Vietnamese army officer who had fled his country after the war. The man wanted to return, and to take the minister with him.

Corbin was hesitant, but he went. In Hanoi, he saw many children missing legs, lost to landmines while they were trying to dig up scrap metal. But instead of limping on prosthetics, they were riding in slings on their mothers’ backs. Prosthetics were almost nonexistent there; wheelchairs were too expensive.

So Corbin started a charity to fund surgeries and buy wheelchairs for Vietnamese children. That same year, he moved home and started preaching again, occasionally, in various places. 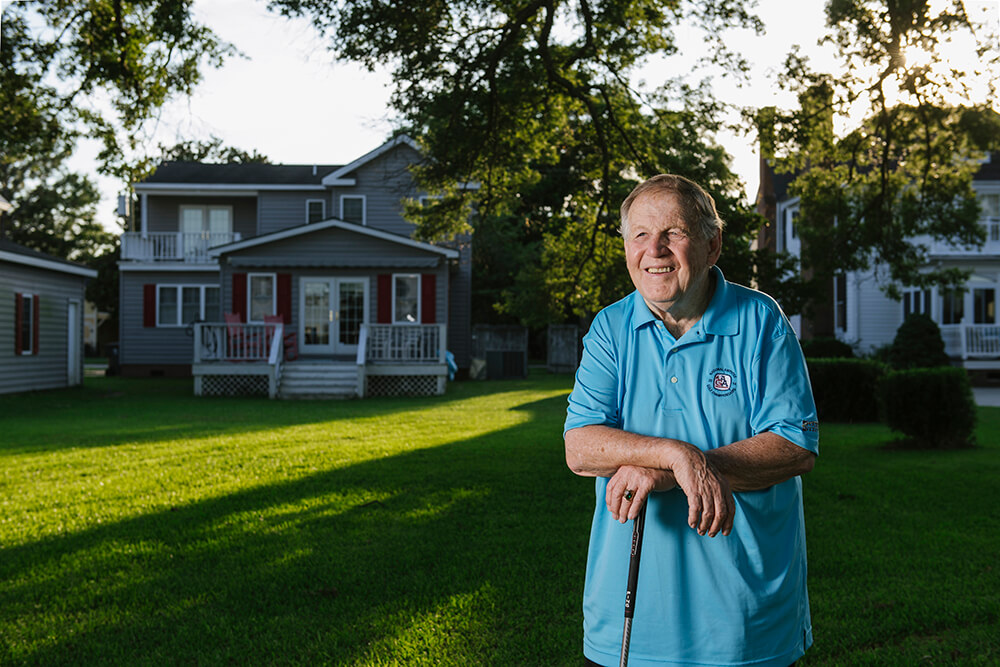 The Rev. Corbin Cherry at his home in Hertford on the banks of the Perquimans River. photograph by Andrew Kornylak

Corbin lives alone now, in a sprawling house on the western edge of Hertford — a sleepy peninsula town of 2,000 people. His 1920s home has a shady backyard, which slopes to a bend in his beloved Perquimans River. He hired workers to install a boat lift, and for a while, he was motoring out into the Perquimans at least once a week.

But in January, the minister had a slight stroke. He hasn’t been on the water since.

He recently agreed to let a guest come visit his tidy bachelor home. He gave a quick tour, then sat in a red rocking chair on his deck to share his story.

When words wouldn’t come, he wiped his eyes — and looked toward the water.

In the end, there is the river.

Before the sun starts its slow slide beneath the surface, its reflection clings briefly to the Perquimans; amber streaks shoot between the banks. The river mirrors this last light.

Each evening, the minister watches the ripples in the water, ducks gliding, turtles climbing onto logs, the world slowing down.
And he thanks God for another day.

“When you sit here and watch the water, sometimes you feel the current guiding you,” he says. “You understand.”

A friend from church is installing a remote-control boat lift, so that Corbin can take his boat, Joy, back on the water.

And the minister has changed his mind about being buried at Arlington National Cemetery, where he would be surrounded by soldiers. Now, he wants to stay here in Hertford.

By the river. Where he feels closest to his father. And to God.