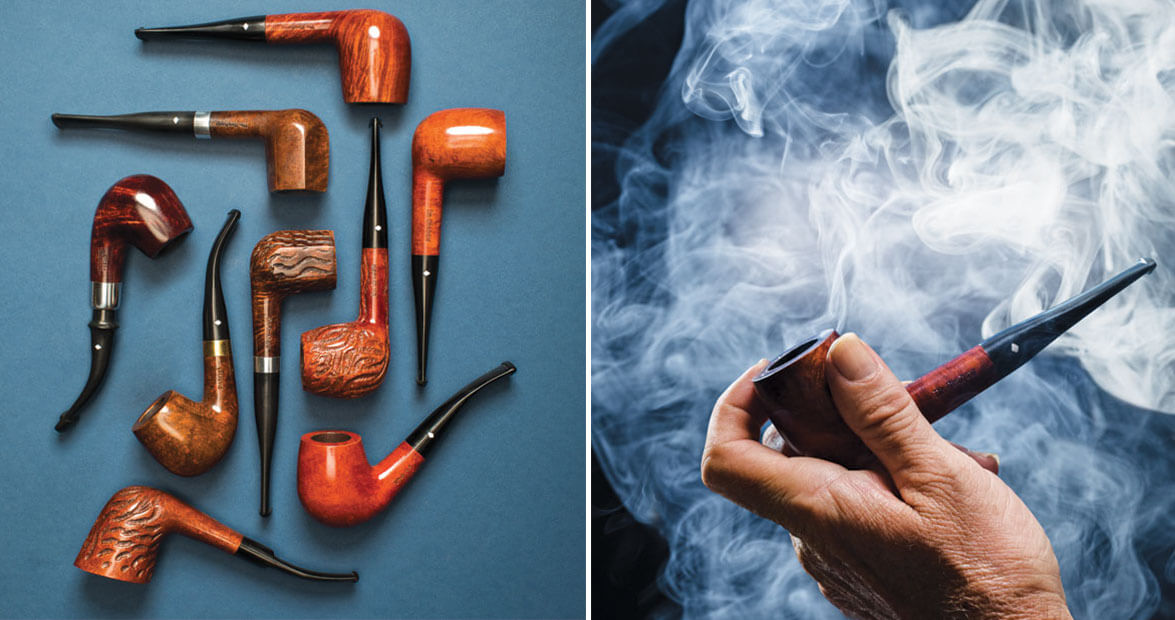 In 1943, the world’s largest pipe manufacturer moved from Chicago to Sparta, a small town near Stone Mountain, in search of roots. Mountain laurel roots, to be exact. Nearly every Sherlock Holmes-style smoking pipe you’ve ever seen was made from briarwood, a dense root that grows in the Mediterranean. But during World War II, shipments of briarwood were stalled. The Linkman family — the owners of Dr. Grabow Pipes at that time — didn’t know how they could keep going without the briarwood they needed.

So they looked for an alternative.

Mountain laurel, native to the hills of Appalachia, was the best replacement that Dr. Grabow could find. In an improbable move that would alter the lives of generations of North Carolinians, the company packed up its operation and headed east. 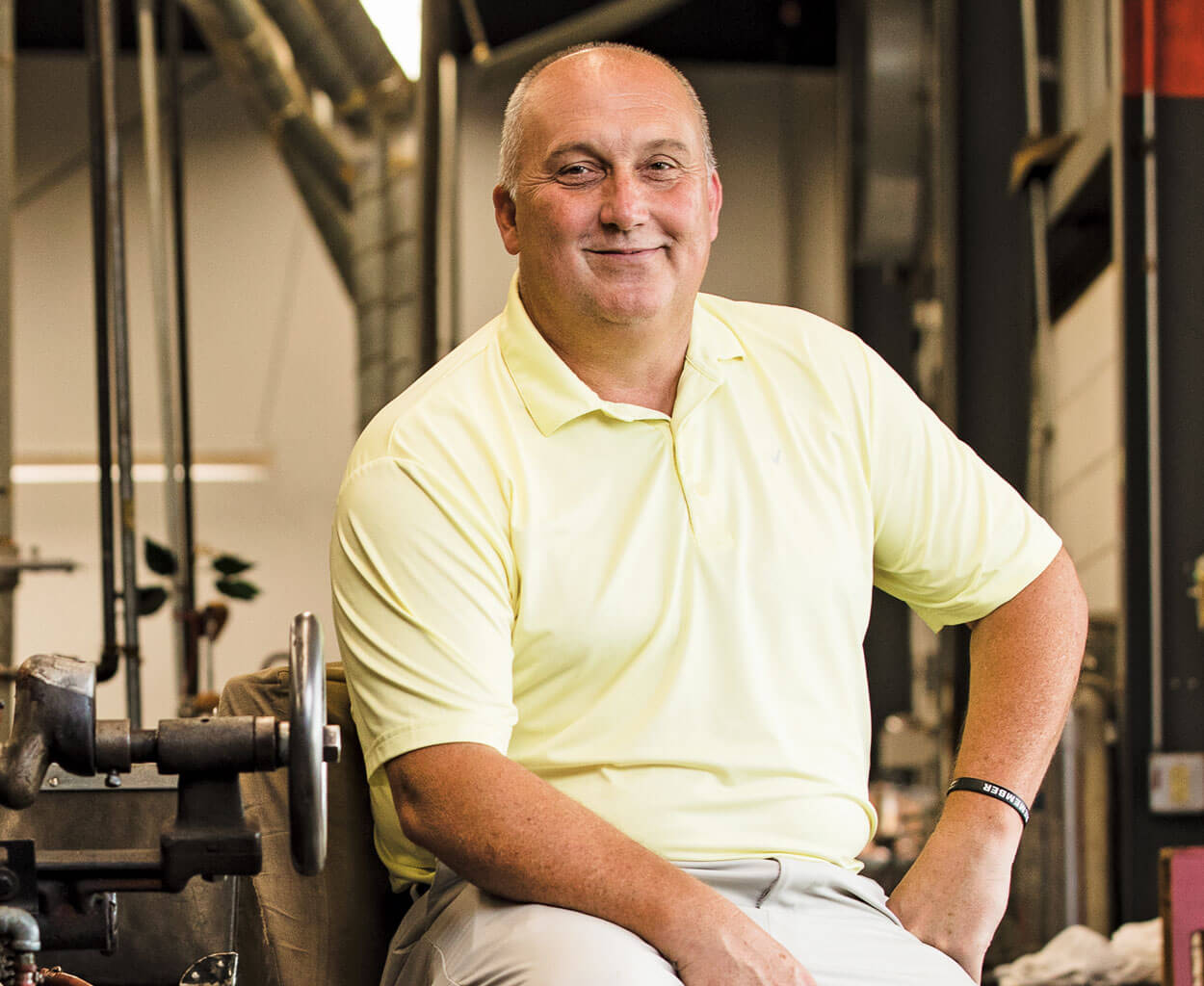 As a child, current plant manager Rick Wooten would accompany his grandfather, a Dr. Grabow night watchman, on his rounds of the old factory’s grounds. Two more of Wooten’s grandparents also worked at Dr. Grabow. photograph by Alex Boerner

Importing briarwood in the 1940s might have been difficult, but harvesting mountain laurel wasn’t much easier. It required digging on steep hillsides, in dense laurel hells. There was a lot of loss: roots cracked and broke when they were pulled from the rocky ground. Because of this — as well as resumed peace overseas — Dr. Grabow made pipes out of mountain laurel for only a few years. Exactly how many, nobody knows. It’s one of the questions that Rick Wooten, the company’s present-day vice president and general manager, wishes that he’d asked his grandparents.

“Without the history, an antique pipe’s just a piece of wood somebody’s been chewing on.”

Wooten’s grandfather was among the company’s first 10 employees in Sparta. The factory had hundreds in its heyday. “If you grew up in Sparta,” he says, “you’ve had a family member who worked at Dr. Grabow. It’s affected every family in Alleghany County at some point in their lineage. Four generations have moved through this building.” And that’s not counting the old location, where a water tower bearing the company’s name still stands as Sparta’s most distinctive landmark.

Three of Wooten’s grandparents ended up working at Dr. Grabow, in addition to countless aunts, uncles, and cousins. “It’s an honor to run the company where my grandfather started as a laborer so many years ago,” Wooten says.

The current owner of Dr. Grabow Pipes — which now operates under the umbrella of International Pipes & Accessories, LLC — lives in New Zealand, but Wooten, a lifelong Sparta resident, oversees operations. He looks official in a red Dr. Grabow golf shirt, but he’s got the casual demeanor of someone who doesn’t mind having pipes of various shapes strewn among the important papers on his desk. Wooten leans back in his chair and says that, from time to time, local visitors will walk into the plant’s front office with bouquets of pipes they’ve inherited, wanting to learn more about them. “People get nostalgic, remembering their family members sitting around smoking pipes,” he says.

The number of people who smoke pipes has been in decline since the 1960s, but a collector’s market keeps things going, and many buyers have no interest in tobacco. “Some people collect Beanie Babies, some people collect baseball cards, and some people collect Dr. Grabow pipes. Those collectors want to know everything they can about their pipes,” Wooten says. “Without the history, an antique pipe’s just a piece of wood somebody’s been chewing on.” 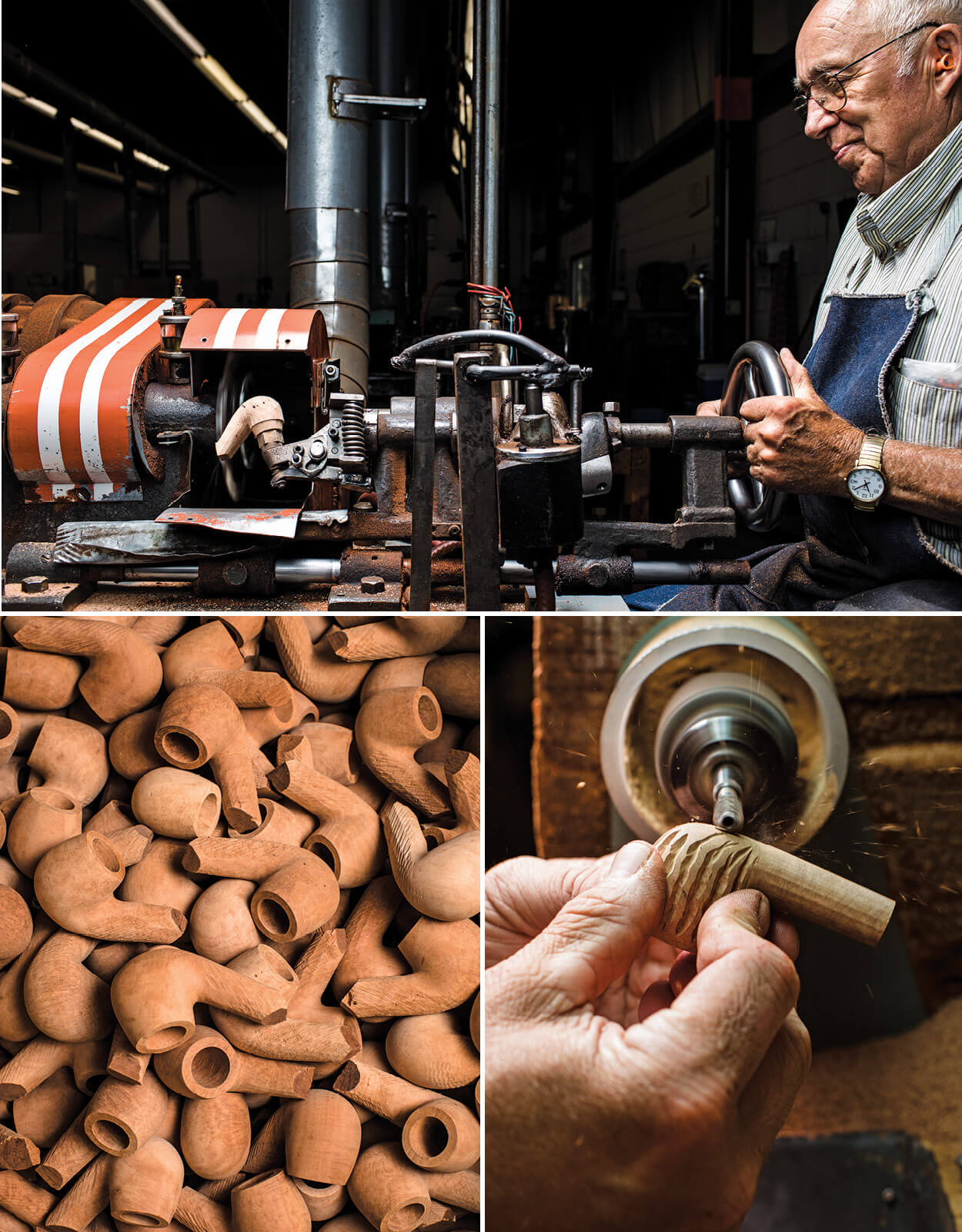 Dwayne Love (above) couldn’t stay away from Dr. Grabow. After retiring 11 years ago, he returned to his job: using what employees call a hand frazer to cut bowls into the roots. Afterward, blank bowls are ready for the detailed carving that will make each pipe slightly different from the others. photographs by Alex Boerner

Dr. Grabow doesn’t give public tours of the factory anymore, but Wooten often finds reason to walk the floor, where the 52-step production process can be traced from the imported briarwood to the finished product. Brian Johnson, a 25-year employee, is usually the first to touch each pipe in the form of a dense, heavy, rectangular piece of briarwood. He sorts them according to size, and then puts them back into the recycled burlap coffee bags in which they arrive from Greece or Spain. At that early stage, he decides if the wood can be used for a large or small pipe. There are dozens of possible shapes.

Johnson has manned other stations in the building, too, including the finishing department, where pipes go through the process that brings the briarwood’s grain to the surface. The diversity of positions that he has held gives him an appreciation for each job.

Wooten calls the pipe-making process “a marriage of handicraft and technology. If you look at the way these were made in the 1950s and now, there are a tremendous number of consistencies. Quality is determined by a human being. Every pipe we make is unique. If a human being crafted it, it’s impossible for two to be the same.”

And that’s part of the beauty.

Johnson sheepishly admits that sometimes, a pipe comes through the line that he can’t bear to package and mail out. Those are the ones that he adds to his personal collection. “When you see a special pipe, you have to lay claim, or somebody else will,” he says. None of Dr. Grabow’s employees regularly smoke, but almost everyone in the building has a collection of smoking pipes. There’s just something about the way the burl of the wood comes through during the final lacquering that can drive a man to swoon.

When the pieces of briarwood leave Johnson’s station, they’re wheeled — on a clean, well-lit concrete path that’s been worn to a sheen — to a work area called The Briar Shop. Most of the woodworking machines in this area have been in operation since the ’50s, and the men who work them have perfected their use.

Dwayne Love started working at Dr. Grabow in 1966. He retired 11 years ago, but — in an act that’s something of a pattern at the factory — it wasn’t long before he asked to come back. “My wife finds stuff for me to do if I’m home too much,” he says. “I can come in here and relax.”

None of the employees regularly smoke, but almost everyone in the building has a collection of pipes.

It might seem strange to think of factory-floor work as relaxing, but to Love, woodworking is almost like meditation. Using an old piece of equipment that Dr. Grabow workers call a hand frazer, he traces a cast-iron model to create a duplicate in briarwood. He holds up a sample and says, “It’s been so many years, I could run the whole pipe and never even look at it.”

Wooten shakes his head in admiration. “I’ve tried working that machine before,” he says, “and I felt like a monkey wrestling a football.”

Occasionally, workers in The Briar Shop find strange objects in the briarwood. They’ve discovered rocks and, once, even a bullet. It’s not unlike how an oak tree will sometimes swell and swallow up a piece of barbed wire fence.

“A root will grow around whatever it finds, and it’ll hold on to it,” Wooten says. 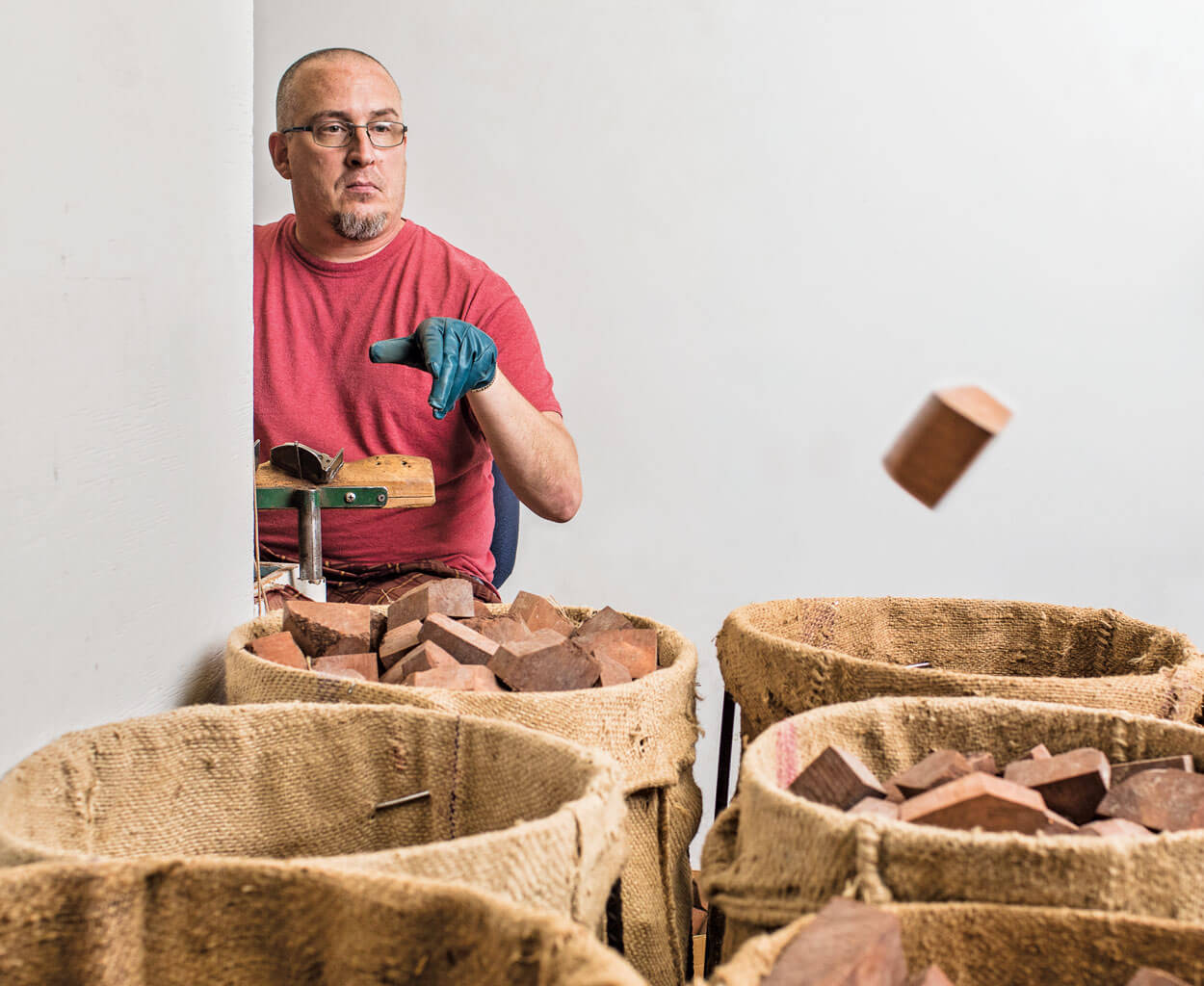 Jones can still remember the pride she felt as a child watching her grandmother work the sanders, perched on a stool — maybe the same stool that Jones occupies today as she double-checks the quality of what comes out of The Briar Shop. Under her watch, the job of sorting gets more specific. She tosses a discard into a box destined for a woodstove. Another lands in a collection that’ll be made into pipes with carved bowls. Then, there’s a nice one that will work well for a smooth-sided pipe. Each goes into its respective container: plunk, plunk, plunk.

“Making pipes — it’s a family love, I guess, since my father worked here, too,” Jones says, pausing to point out an imperfection that sends another potential pipe bowl to the woodpile. “I like working with wood — the grain of it, how it lets you use your hands. It gives you a meaningful feeling to know you had a part in making something. Whenever I see a pipe in a movie or on television, I look close and think, ‘Maybe that’s one of ours.’” 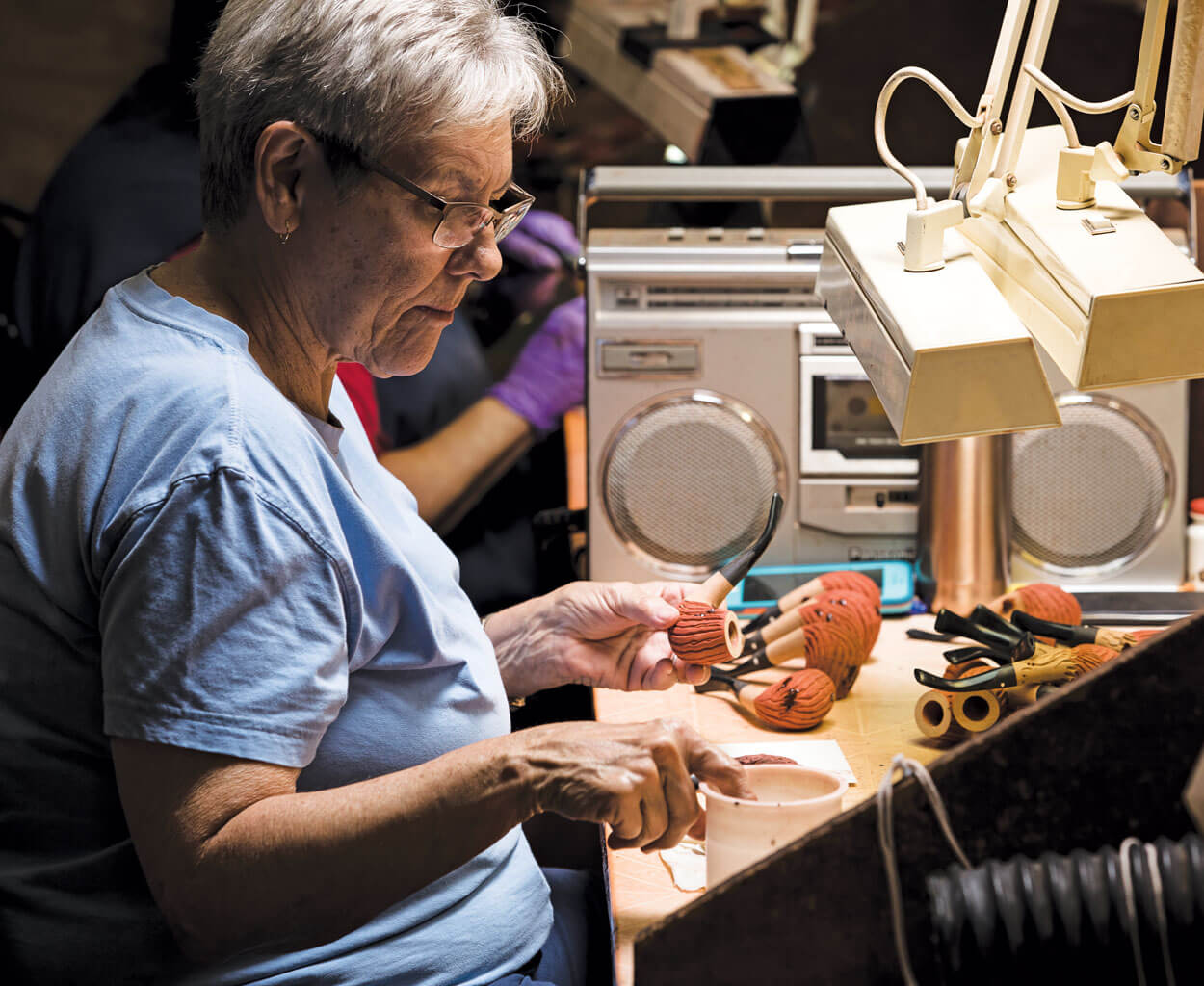 Judy Jones has been working at Dr. Grabow for 45 years, but she’s been coming to the plant since she was in elementary school. Today, Jones touches up blemishes on pipes before they’re sent out into the world. photograph by Alex Boerner

Wooten sometimes jokes that, with just 30 years under his belt, he’s a newcomer to the business. But after hearing Jones’s story about coming to work with her grandmother, Wooten reconsiders and says, “You know, I never did think about it much, but I guess I’ve been coming here since I was around 7, too.”

His childhood memories include the gritty whirl of the sanders, and the hush of the place when his grandfather, a night watchman, would walk the grounds after hours. “He used to take me on his rounds,” Wooten remembers, pausing for a moment, recalling the times he spent by his grandfather’s side, circling the old Dr. Grabow building to make sure that nothing irregular was going on beneath the smooth, dark surface of those long-ago nights. Although Wooten doesn’t own Dr. Grabow, the plant gives him a sense of belonging, as it does so many of the 30-odd employees who continue doing the work of their parents and grandparents. “These pipes,” he says, “are the roots of our heritage.”