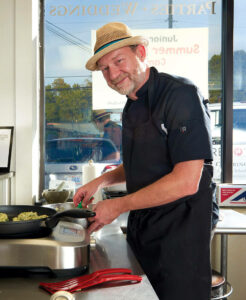 Seven strangers take a seat at the counter as their instructor greets them with a colorful spread of produce and cheerful Latin music. It’s Spanish night at Reto’s Kitchen, a small catering company and cooking class center in Greensboro.

Owner and Head Chef Reto Biaggi reads off this evening’s menu: fried calamari and Gorgonzola phyllo rolls, followed by a chicken-and-shrimp paella served with a harissa salad, and, finally, a citrusy crema catalana — a Spanish crème brûlée — for dessert. Biaggi builds the menu around dishes that are fairly simple and tasty so that participants will make them again. Throughout the 10 years that he’s led cooking classes, he’s seen everything from trained chefs to people who claim to have never cracked an egg. “Yet they can make a soufflé,” he says. “Everything can be learned.”

Biaggi’s hosting and cooking skills were learned, too, but his passion for hospitality was inherited. A native of Switzerland who grew up in France, Biaggi was raised in a family that loved to host. “We were always involved in the serving,” he says of the events that his parents would hold, sometimes for more than 70 people.

After spending years following his mother and grandmother around the kitchen, 12-year-old Biaggi announced to his family that he would become a chef. His father immediately expressed concern. “He tried to drill it out of me by sending me to work at a different place every summer,” Biaggi says. First, it was a five-star hotel in his Swiss hometown when he was 14. The following year, he worked at his uncle’s upscale restaurant. But Biaggi only fell more in love with serving, cooking, and bringing people together. 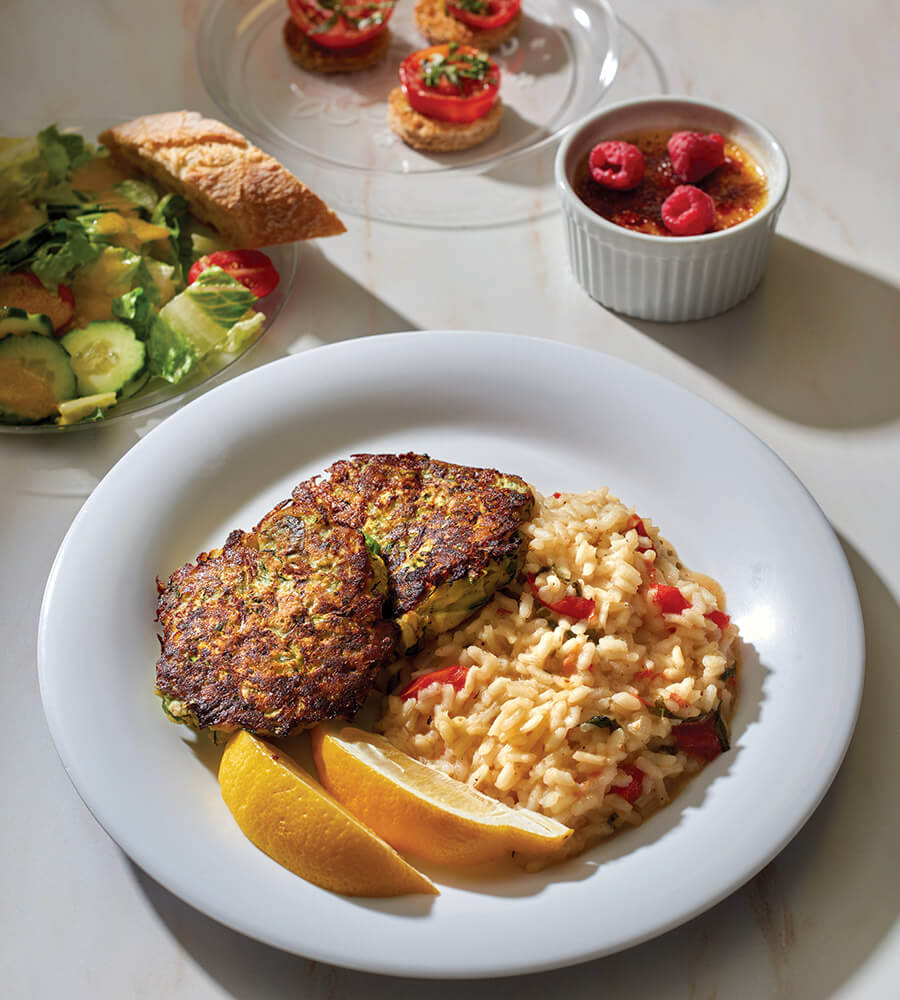 Eventually, after working at many restaurants, he met an American woman named Emmy at Disneyland in Paris. They married and moved back to her hometown of Greensboro, where Biaggi opened a catering company. A small kitchen in the Lindley Park neighborhood became his corner of hospitality.

Biaggi has a collection of about 5,000 recipes that he references for classes and weekly menus, which customers use to order ready-to-eat meals. There are a handful of recipes that he can recite by heart. One of those recipes is steak Diane, which consists of mushrooms sautéed in cognac, flambéed in beef stock and cream, and served over beef — a dish he made at his uncle’s restaurant. Another is the potato gratin that his mother would make, which he now offers during the holiday season. And then there’s the spaetzle and the cucumber-dill salad that are staples of his popular Swiss cooking class, an ode to his grandmother.

Just below the rim of a ceramic ramekin, a coarse layer of sugar begins to bubble under the flame of a torch. The woman wielding the torch is pastry-chef-for-the-night Lora Hawks. “Get your phones ready,” her husband, Randall, advises the group. “We might have to call 911!”

The couples lining the counter, strangers just two hours ago, all begin to laugh. But no one is worried. Each person had a hand in tonight’s meal, and there’s a level of camaraderie and comfort that emerged somewhere between the phyllo rolls and the paella.

“At first, people are a little surprised by the setup,” Biaggi says. “Eventually, people start talking to each other and start making friends and sharing stories.” What are you guys up to next week? We should get dinner! A smile spreads across Biaggi’s face as he cleans up the cooking station. He’s heard this sound in dining rooms around the world, in many languages and accents, yet he always recognizes it. It’s the sound of conviviality, a universal concept.