The founding history of Pinehurst is both charming and not a little startling. In 1895, James Tufts, a Boston soda fountain magnate, purchased 5,800 acres in Moore County — timberland so ravaged for tar and turpentine that little was left but sand and stumps — to create a health retreat. Golf officially arrived in the person of famed course designer Donald Ross in 1900. Wealthy East Coasters flocked.

Imagine, then, the contrast mere miles away from the links and fairways, the elegant hotel and gala evenings, to country families living down dirt roads in near-poverty conditions, lacking indoor plumbing, telephones, or transportation, and — most important — with farm women bound at home by children, having no outlet to earn money, and no way of reaching it even if they did. Widows, too, who’d lost their husbands’ income, were prevented by societal mores from seeking employment. “This was the ‘Carolina Desert,’” reminds Audrey Moriarty, executive director of the Given Memorial Library and the Tufts Archives. “There were no stores,” a board member of the Sandhills Woman’s Exchange, or SWE, adds. “It was a golf place, a resort. Plus, this was a seasonal community until air-conditioning came in the ’60s. The season shut down in May when the heat drove everyone back north.”

Yet affluent visitors to the Village of Pinehurst had seen the skills of country women at the 1922 Sandhills Fair: baked and canned goods, quilts and rugs, baby clothes. Another Boston native, Katherine Tuckerman, was familiar with the Federation of Woman’s Exchanges, a national organization whose motto was, and is, “Helping others to help themselves.” Quite radical considering its founding date of 1832, these “exchanges” provided women with a location to sell their homemade goods. In May 1923, Tuckerman, Molly Lovering, Darthea Crocker Cowgill, and seven other women met to formally organize, recruit funds, and search for a location to establish the Sandhills Woman’s Exchange.

That location is as much a part of Pinehurst’s history as the Exchange itself. In the early 1800s, a one-room cabin was built adjacent to a gristmill northeast of town. After the Civil War, it was moved to the Archibald McKenzie family home to serve as a kitchen. Pinehurst founder Tufts was so taken with the cabin that the McKenzies gave it to him, and he relocated it to the village in 1896 to serve as a museum for early Sandhills artifacts. The Tufts family donated the cabin to the Exchange in 1924. Two hundred years later, that chinked and hand-hewn cabin, Pinehurst’s oldest structure, still stands and serves as the Sandhills Woman’s Exchange, celebrating its own centennial this year.

Members Sandy Gernhart and Susan Taylor-Schran have devoted years to researching the SWE’s history. In the Tufts Archives of Given Memorial Library, the earliest meetings of the SWE are collected in the original folder tied with twine. The pages, speckled and discolored with age, bear the handwritten notes that detail what the Exchange meant to the women who were supplementing agrarian incomes. One officer discovered a woman who made placemats and rugs on a loom that was likely from the Civil War era. Local farmers cured hams, and members of the Exchange sold and shipped them. They gathered and sold kindling for Raleigh hearths. Another entry notes that a Mrs. Philbrick sold 400 pounds of fudge in 1938. 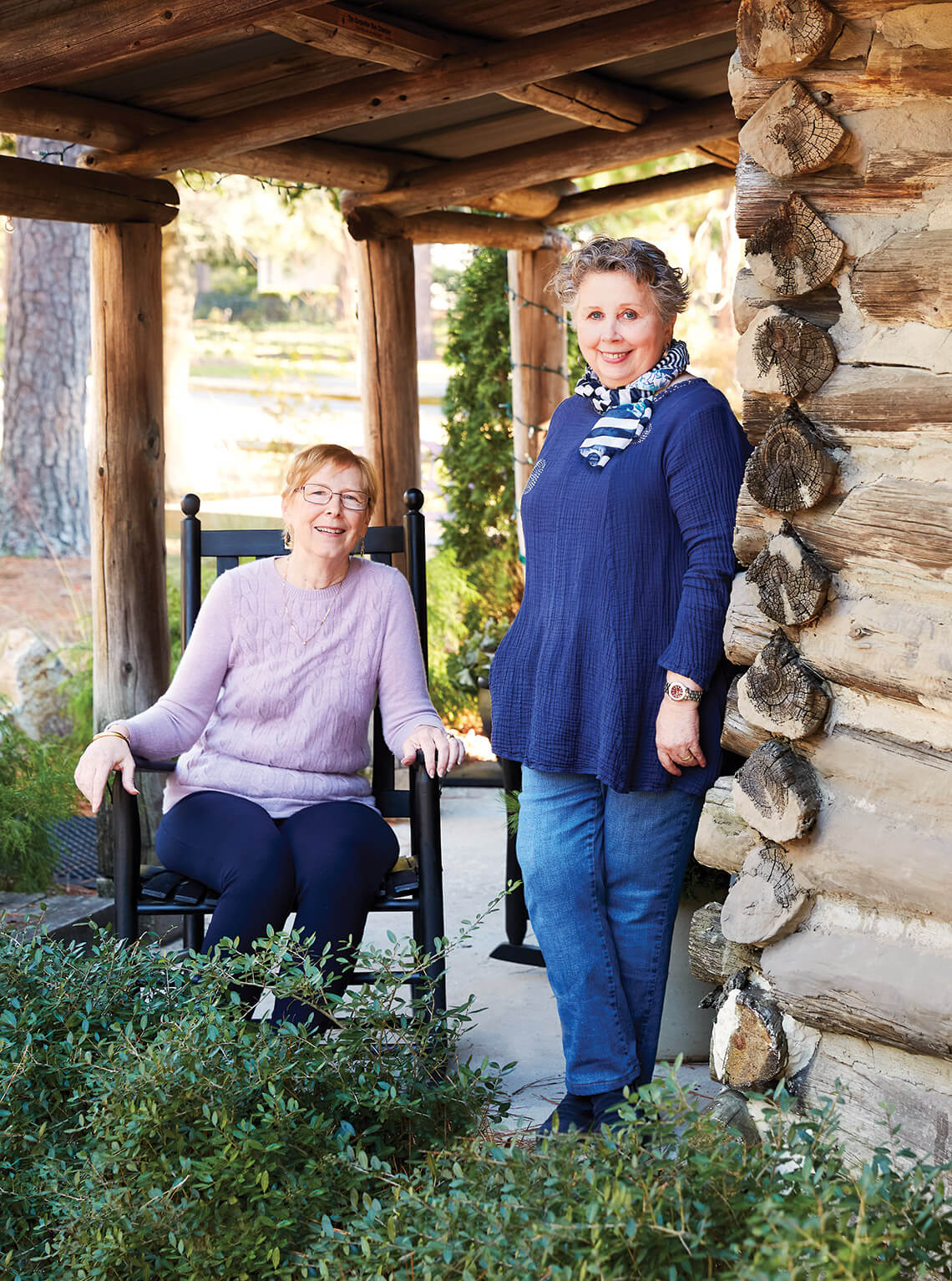 “The Exchange was a godsend to the women of the area,” Taylor-Schran says. “Think of what it meant, in the Depression-era ’30s, for a woman to earn an extra $200 a month, or $1,000 a year.” Think of what it means, even now, when a visitor reveals that “without the Exchange, we wouldn’t have made it”; the income from his mother’s boiled peanuts put him through college.

These organizers didn’t merely provide a place to sell goods, though; they traveled to the poorer women’s homes by car to transport their crafts along the ruts and shifting sand of Sandhills roads. They taught the women newer, safer canning methods, more intricate needlework techniques, and other crafts. A 1920s article from The Pilot newspaper states that “everything from doilies to cornhusk dolls to bedspreads” was available for sale.

What surprised these historians, never mind stymied their research, was that as late as 1975, SWE officers and members were listed by their husbands’ names only. But what a joy when pleas for information sent out via social media produced a call and documents from Darthea Crocker Cowgill’s daughter Meriwether Cowgill Schmid, now 94 and living in Connecticut, who visited the Exchange every spring break. “I’ve been coming here since I was yea high!” exclaim some visitors, who hail from every state and overseas.

Today, baby clothing, jewelry, foodstuffs, woodwork, and pottery from 32 artisans are displayed at the Exchange. The artists who sell their works through the SWE do so to support its mission and to earn additional income for themselves. The current women behind the Exchange — all volunteers — are still as devoted and persevering as Cowgill, whose poignant 1928 recollection paints an accurate, if heartbreaking picture: “… imagine living 17 miles from the tiniest town, caring for two cows, four to eight children, and the yearly budget depending on whether the tobacco and cotton crops were good or poor, and suddenly finding that by spending a few hours a week hooking rugs out of threadbare garments or knitting cotton gloves for the more fortunate who hunted to hounds, that you could have from $5 to $200 a month to spend on luxuries. It would be hard for us to really conceive the joy it brings.” A doll for a child, a set of china plates, a bolt of fabric for a dress.

Hard to conceive indeed, when a multimillion-dollar resort is, quite literally, in a tennis court fence a mere arm’s reach from the back door of the Sandhills Woman’s Exchange. Within a grove of pines, the 200-year-old cabin, like the 100-year-old mission behind it, still stands: sturdy, humble, plucky, and permanent. Like, it seems, the women who founded it, and those long-gone souls who first sewed and knitted, loomed and hooked, cured and canned the products and handcrafts that made a difference not only in their daily lives, but in the history of North Carolina women. 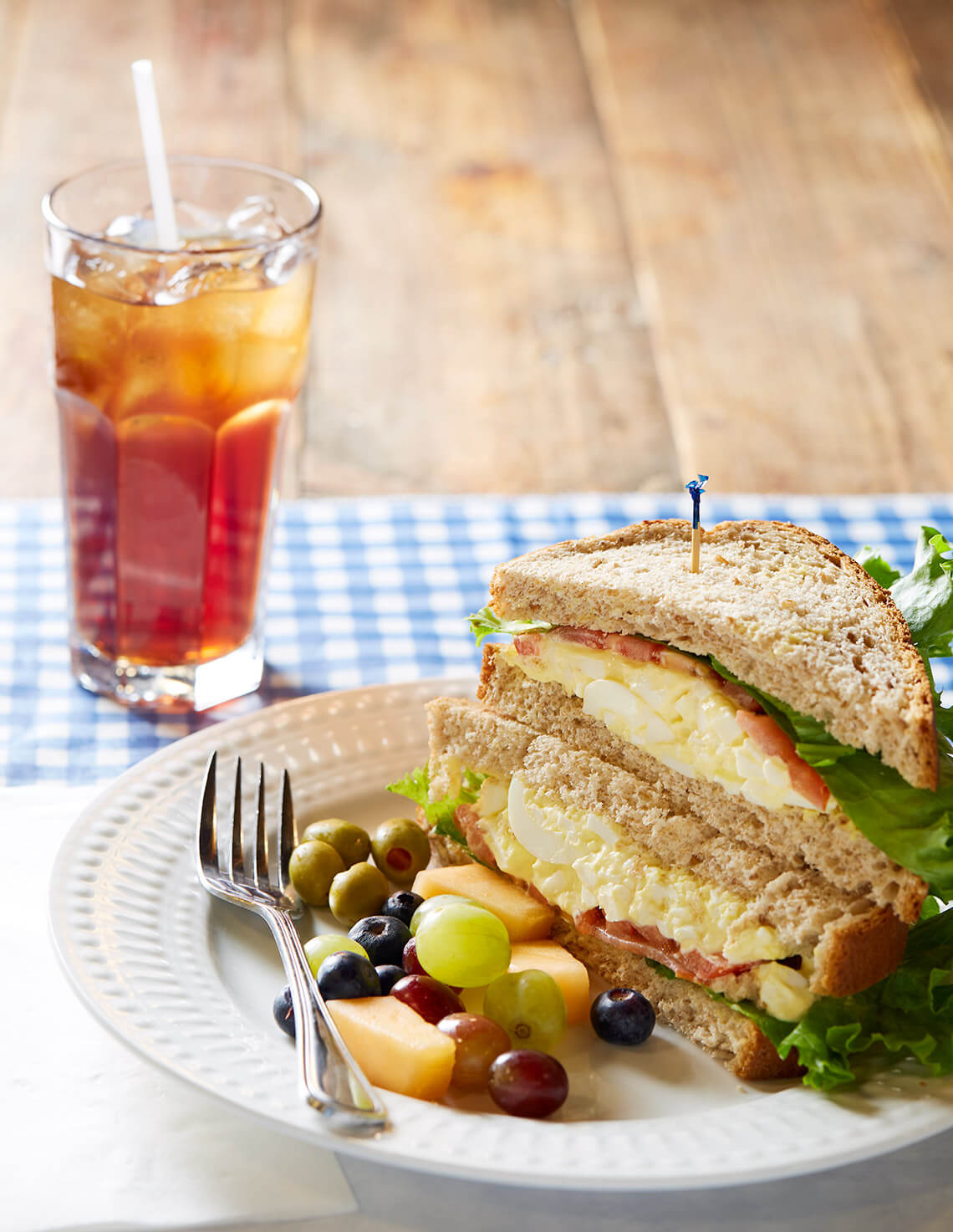 Duck your head a bit — people were shorter 200 years ago — and move from the SWE gift shop toward the delicious aromas emanating from The Cabin Café, a lunch spot opened within the Exchange in 1954. The low ceilings, wooden floors, ladderback chairs, and tables for up to six lend a cozy aura to the bustle of Chef Katrina and her waitstaff, some of whom have been volunteering for 20 years. Folks keep coming back for the egg salad sandwich, asparagus-and-artichoke quiche, marinated bean salad, the Tuesday soup special of lobster bisque, and the Reuben sandwich, claimed by visitors from New York to outshine their local delis’.