One summer day, I opened my front door to find a woman I’d never seen before. “Brenda said that I could come make relish with y’all,” she told me.

It was a sign that canning day at my house had gone beyond mere food preservation. These days, it’s turned into a heck of a party. No wonder people just show up. They might be, as in this case, friends invited by other friends. Sometimes, people come after I’ve given them jams or pickles we’ve made at a previous party, and they just want to see how it’s done. It would be nice if I knew before a stranger showed up at the door, but we’re all sisters in the kitchen.

Canning days are for singing together and laughing out loud. They’re for counseling sessions and for solving international issues, if only world leaders had a microphone hanging above the steaming pots to record our wisdom.

Making jellies, jams, and pickles isn’t difficult, but you need the right equipment. The massive kettle of water used to process the filled jars takes so long to boil that I start it early. Then I locate my jar lifter, the rubber-coated tongs that help me maneuver hot jars in the kettle. I bring out every dish towel that I own to serve as resting places for the jars as they make what old cooks called “canning music” — the satisfying ping of lid seals popping into place. Other towels are used to protect the counter and to mop up the inevitable mess that canning produces.

Canning involves lots of chopping, mashing, peeling, and stirring, so, years ago, I started inviting friends to help. I thought that would make the process go more quickly and pleasantly. It does. With extra sets of hands hulling and slicing strawberries, measuring sugar, or dipping tomatoes into simmering water to slip off the peels, canning can be fun. That’s my view, anyway.

My grandmother preferred to work alone in her Statesville kitchen, as if she were guarding proprietary pharmaceutical formulas. After I dropped off the buckets of blackberries that she’d ordered little me to pick from the back part of her property, I was told to scoot. My mother was of the same mind, demanding that everyone stay out of the way as she crammed peeled tomatoes into quart jars.

So it’s not like I learned to can at the feet of my elders. However, decades ago, I inherited my grandmother’s Ball Blue Book, which is still the bible of canning. The guide covered every detail, and the recipes seemed easy, so I started making jam. Alone. This was way before canning was cool. I just thought the goods would make nice holiday gifts.

I was right. People went nuts for anything homemade, and they still do. Most of what I make — from strawberry jam season through okra pickle time on up to late-summer fig preserves — I give away. Including the legendary vegetable relish, which is what brought that welcome stranger to my door. 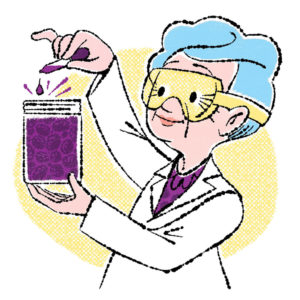 The relish began after I made some as an experiment and gave it to my friends Brenda and Linda, who devoured it with … well, you know, relish. They insisted it was so good that I needed to make more the next summer, and they offered to help.

At the end of our first day canning together, the biting odor of onions pervaded the house. Red tomato juice freckled the white light fixtures over the kitchen island, towels were stained crimson with flecks of peel, and bell pepper seeds covered the sticky floor like confetti. The kitchen looked like a set from CSI: Farmers Market. But it was worth the carnage, and not only because 40 jars of relish were sitting on the counter. Our work had freed our minds and hearts to connect in ways that were deeper than chatting over lattes in a café.

We’ve made relish through the deaths of parents and job losses, while dealing with troubled grandchildren and loved ones with dementia. During happy times, too, like Linda’s joyous retirement and Brenda’s wedding to Nance, who joins us despite her professed lack of kitchen skills. (She’s good at helping my husband pick up lunch.) The relish has even sparked family arguments, as it did when Brenda’s grandma accused her father of stealing a jar at Christmas. He had, and he wanted more.

Even the famous succumb to the charms of my relish. On the way to Chef & the Farmer restaurant in Kinston once, I impulsively grabbed a jar as a gift for Chef Vivian Howard, whom my husband and I had gotten to know at a food event. Two months later, an email came: Vivian pleaded for more. How could I turn down a chef who has fed me so well? She’s been on the relish list ever since.

My canning world has changed over the decades. Linda has cut back on sugar, so she often takes only one jar of jam at the end of the day. Brenda’s father’s illness has made her attendance sporadic.

The jams and relish are great, but they aren’t the whole point. Canning is about being together, spinning what could be a chore into a communion.