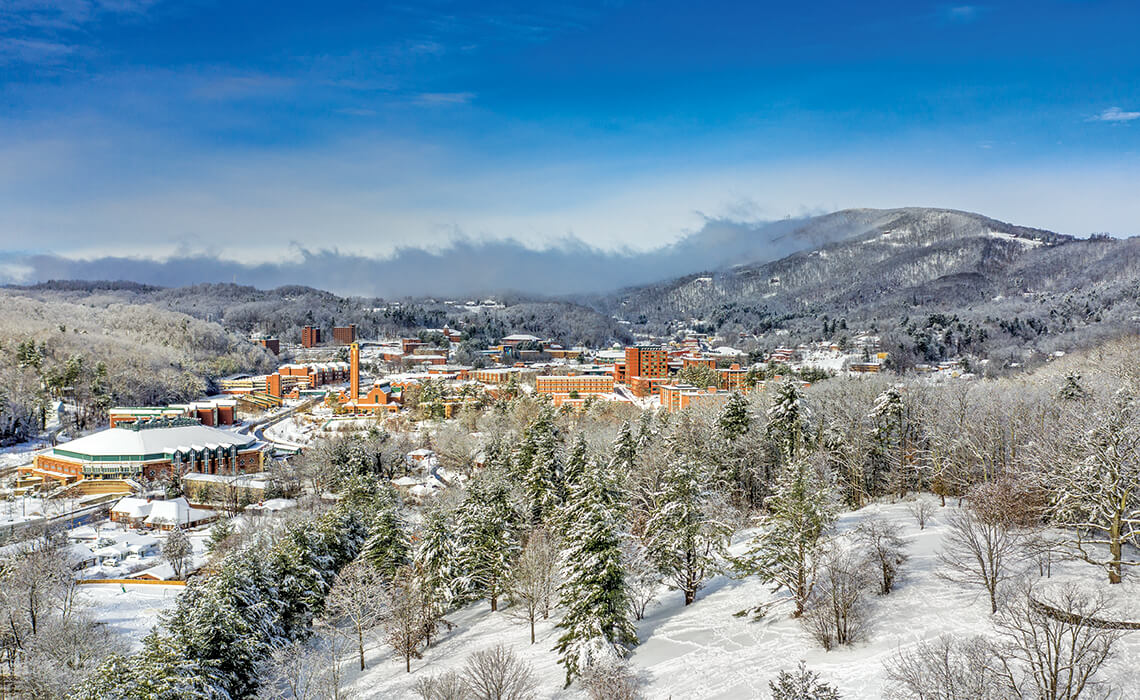 In Boone, where the average yearly snowfall hovers around 35 inches, winter weather is never far from mind. By the late 1980s, some students had begun choosing Appalachian State University for that very reason: With ski culture in full swing, App State’s proximity to classic slopes like Beech and Sugar mountains was a draw. In nearby Blowing Rock, App Ski Mountain’s French-Swiss Ski College — founded by an ASU alum — even offered course credits. But as generations of resourceful Mountaineers know, you don’t need skis or a snowboard for wintertime fun. A snowy hill and a sled — or a cafeteria tray — can be every bit as thrilling. 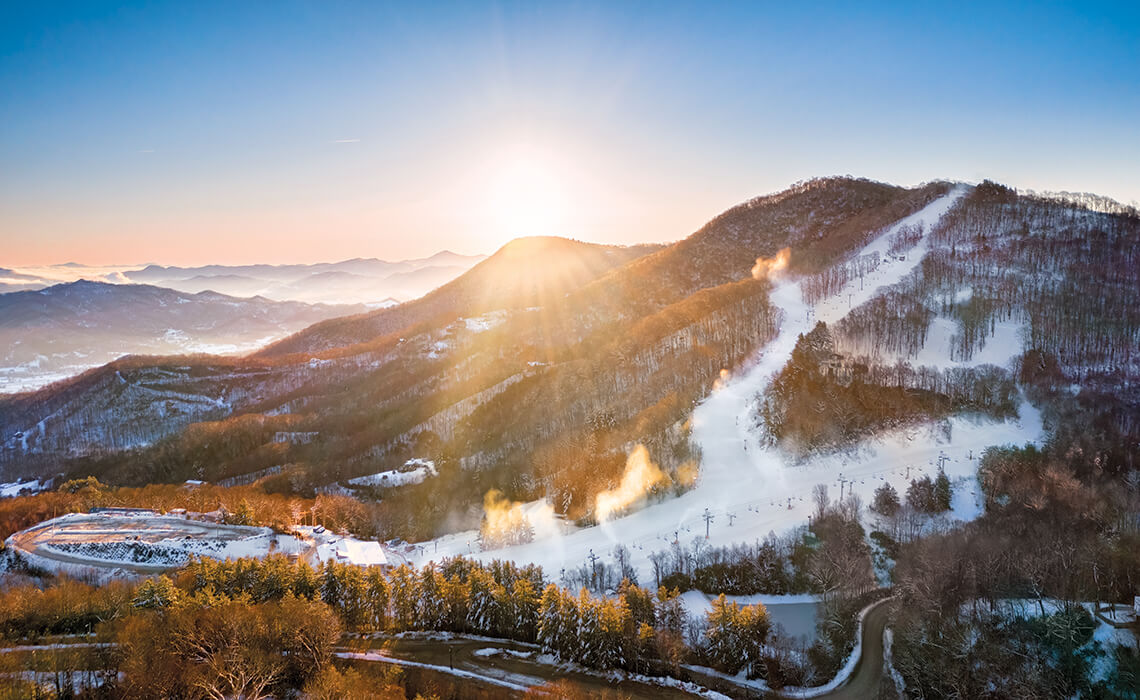 When Tom and Judy Alexander started Cataloochee Ranch in the 1930s, their Haywood County tract was both a working farm and a rustic getaway for city folks to ride horses, fish for trout, and hike the Great Smoky Mountains. The Alexanders would sometimes whiz down the slopes on homemade skis, but in those days, adding a ski run for guests was out of the question — in the South, the snowfall was just too unreliable. Finally, snowmaking technology offered a helping hand. In 1961, the family opened the first commercial ski area in North Carolina, setting in motion a Southern skiing tradition.

Once used to spot wildfires, the Wayah Bald lookout tower was eventually decommissioned. But when the clouds part, it still offers panoramic views of the Southern Appalachians. photograph by Franklin & Nantahala TDC

Island in the Sky

On a frosty winter day, Wayah Bald floats like an island in a sea of clouds, with a lone stone fire tower for its “lighthouse.” Built by the Civilian Conservation Corps in the 1930s, the tower is the highest point on the 5,385-foot bald, and it stands near the intersection of two long-distance trails: the Appalachian and the Bartram. On a clearer day, in a warmer season, hikers might cross paths here in search of blooming rhododendrons and sweeping views of Nantahala National Forest. For now, the landscape waits, quietly, under a blanket of snow and rime.

From the Art Loeb Trail, photographer Thomas Moors followed the Old Butt Knob Trail to reach the 6,040-foot peak of Shining Rock — and a memorable view of Black Balsam Knob to the south. photograph by Thomas Moors

No matter the season, dazzling white boulders crown the summit of Shining Rock, the aptly named centerpiece of North Carolina’s largest wilderness area. Shining Rock was one of the original areas protected by the Wilderness Act of 1964, and, in the decades since, it has grown to encompass more than 18,000 acres in and around Haywood County. And it has remained remote, as promised: Only the most determined hikers see Shining Rock’s white quartz outcrops in the winter months, when neighboring Great Balsam peaks get a snowy coat to match. 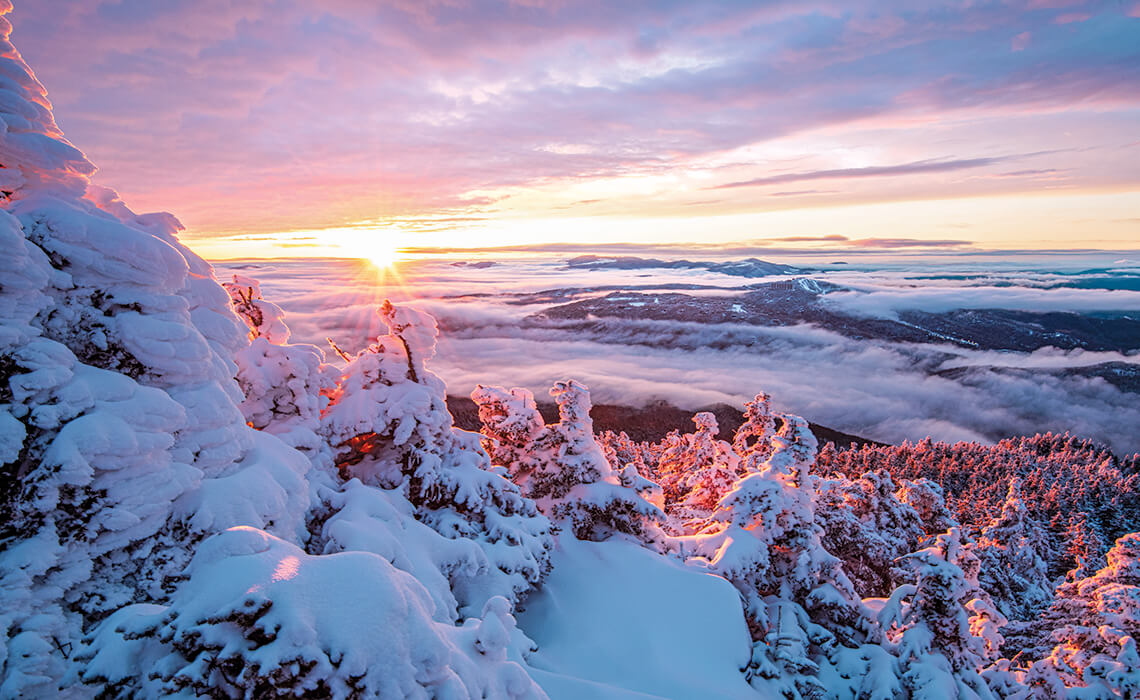 From the Watauga View overlook on Calloway Peak, you can see Linville Ridge and Sugar Mountain — and beyond to the Roan Highlands, located along the western edge of North Carolina. photograph by Andy Toms

The view from Calloway Peak — the highest point on Grandfather Mountain — is always stunning. For experienced hikers, it’s a spectacular reward well worth the strenuous trek along Profile and Grandfather trails. But timing is everything: Those who ascend in time for a winter sunset arrive during the magic hour when the landscape feels a little less frozen, its icy blues and purples cast — if only for a moment — in a warming pink glow.