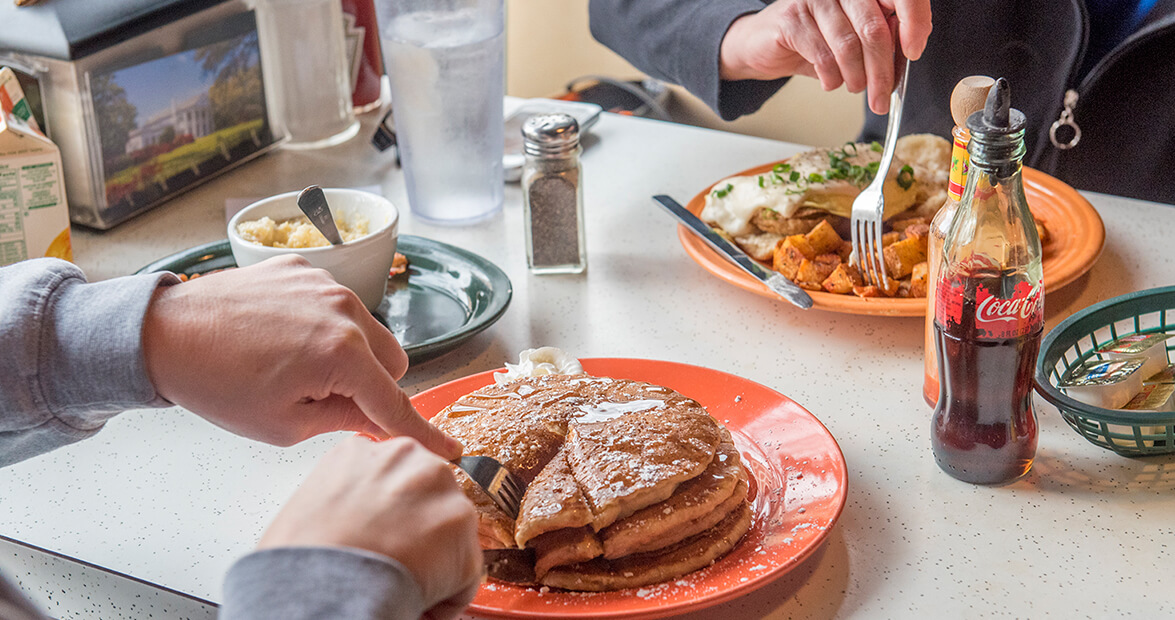 In 1904, the Dixie was a true country kitchen, its then-owners making headlines in the local newspaper for erecting a large curbside bell that was vigorously rung to mark the dinner hour. Menus through the Roaring Twenties paint the picture of a classy joint, with Wilmington’s high society tucking into broiled lobsters ($1 apiece, or substitute frog legs for 60 cents), brandy-laced English plum puddings, and a filet of sole with Imperial dressing. By the time the Great Depression rolled around, the Dixie’s long run as a workingman’s lunch counter and pool hall had arrived, its once fancy fare swapped for cold corned beef and tinned-sardine sandwiches.

The current iteration, launched by Brian Mayberry in 1999, might best be described as short-order-meets-cloth-napkin, and it’s earned the titles of “best breakfast” and “best diner” in local polls.

Mayberry bought the business on a whim while working as a waiter in the now defunct Deluxe restaurant, less than a year after moving to the Port City from Michigan. Given his background in fine dining, he was initially reluctant to swap his toque for the proverbial paper hat, but he’s since come to embrace his role as egg flipper extraordinaire. And in his 16 years helming the Dixie Grill, he’s guided the restaurant to another, unofficial title: Wilmington’s dining room.

The energy of the kitchen — the clatter of pans and the flattop grill’s sizzle — never seems too far away.

Mayberry, who was 27 with a newborn when he took over the griddles, has come to feed multiple generations of regulars. “The Dixie is kind of an example of all the good things you hope to see — family, tradition, pride, hard work,” he says. “I’ve seen a bunch of kids grow up in this place, including my own son.” 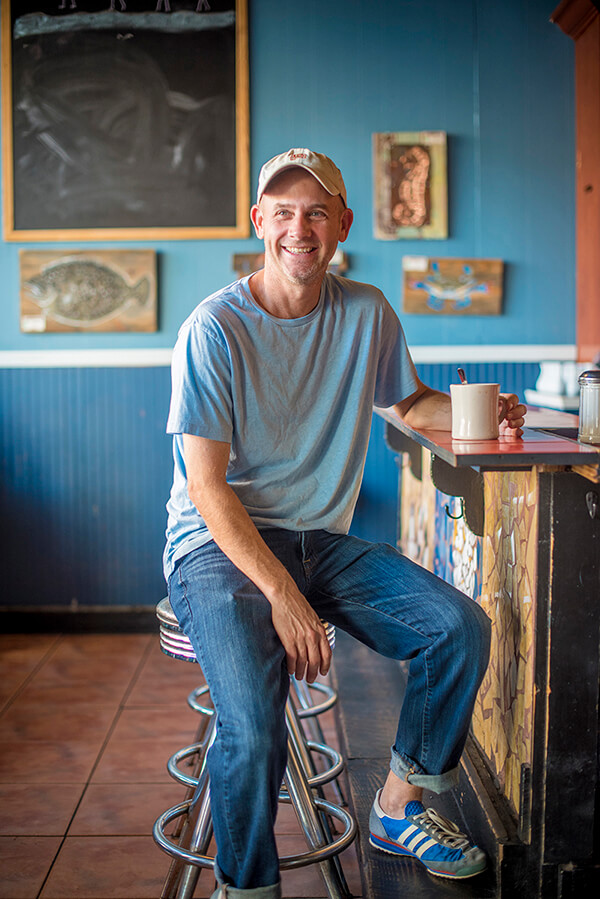 Brian Mayberry didn’t intend to own a diner, but the Dixie Grill’s strong sense of community won him over. “All I ever wanted to do was serve good food to good people,” he says. photograph by Jeff Janowski

Mayberry’s son Owen has contributed a lot to the story of the Dixie Grill. While Dad was shaking pans, Owen could often be found pedaling a red tricycle around the stools. Later, based on the cheeseburgers and chicken fingers he’d come to love, Owen composed the Dixie’s first kid’s menu, complete with the clause that anyone who finished their meal would receive a free cookie. Now, order the off-menu “Owen,” and you’ll get a steak-and-cheese burrito.

“He was our mascot,” Mayberry says of his now 16-year-old son. “Everybody that knew me knew Owen.”

On a typical morning, you’ll know the Dixie Grill by the line spilling onto Market Street, a Bat-Signal for breakfast. Inside, over the heads of brunchers sipping Bloody Marys, the walls are painted blue and orange. The vinyl booths are a little bit old-school; the tile mosaics lining the bar, a little bit new-school. The energy of the kitchen — the clatter of pans and the flattop grill’s sizzle — never seems too far away.

And then there’s this: a massive painting featuring anthropomorphized bacon and toast fleeing a doom-dealing fork, eggs already tragically slain. The image is such an iconic element of the Dixie Grill that it’s emblazoned on the servers’ shirts. That, and the menus waiting on each table — heavy card stock, elegant font — let you know that this isn’t your typical meat-and-three. 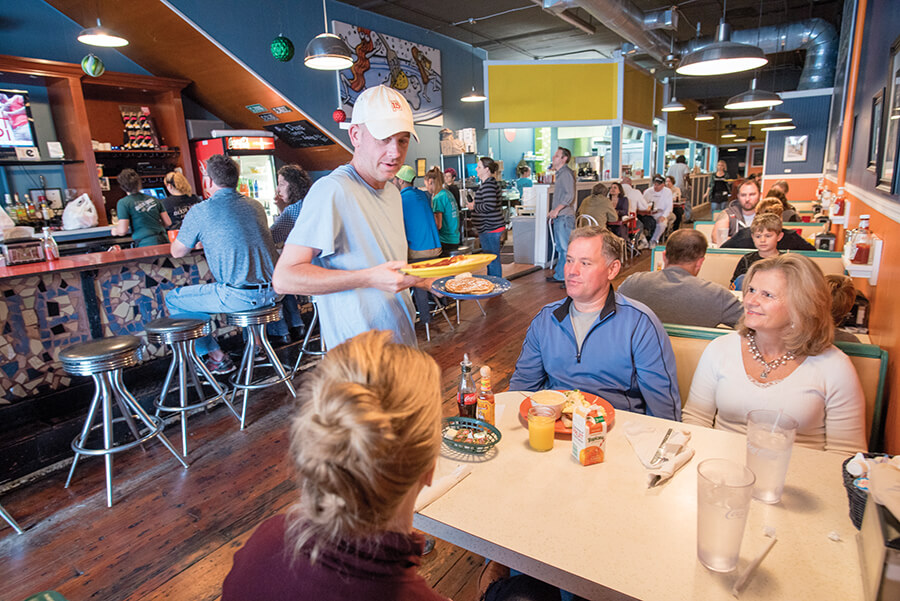 If you lived in Wilmington in the 1930s, you might’ve dropped by the Dixie Grill for the 35-cent Denver sandwich — essentially a ham-loaded Western omelet on bread. These days, Dixie regulars start the day with the huevos rancheros or the popular Louisiana hash: zippy fried potatoes with andouille sausage, eggs, and toast.

At lunch, the Reuben is anything but pedestrian — Mayberry’s house-made brisket and roasted red pepper mayo elevate this sandwich into the superlative category. When it comes to burgers, the Stafford is a standout, its patty a succulent marriage of apple-sage pork, sausage, and ground sirloin.

Like any dining room worth its salt, the Dixie Grill is defined both by its food and by familiar faces. Frank Jones, who’s been coming to the Dixie for 30 years, is a cheeseburger man these days, but at one point would order a buffalo chicken omelet, another off-menu dish that Mayberry concocted with Jones in mind. That level of personal attention keeps him returning about twice a week.

“It’s comfortable. The people are nice, the service is quick, and the food is good,” Jones says. “What more can you ask for?”

Jones, who remembers the Dixie’s pool hall days vividly, is a relative newcomer compared to another pair of institutions. Jack Russ and Linwood Newton have called the Dixie home for the better part of the past five decades.

The avid card players meet daily to play gin, anchoring a table near the kitchen.

“I’ve been going downtown to play cards since I was in high school,” Newton says. “As long as I can get here, I’ll keep coming.”

If the two have any gripes about the comparatively new Mayberry regime, they keep it to themselves — though that doesn’t preclude a little familial ribbing.

“He does a decent job,” Russ adds with a grin. “The food is probably better now.”