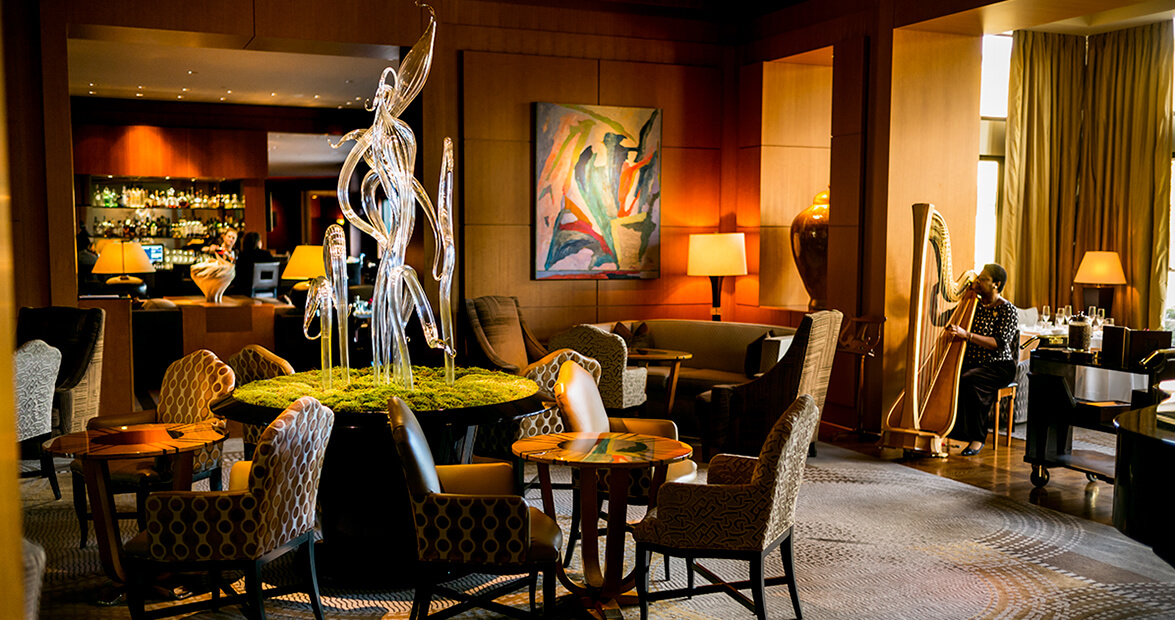 We came in a steady downpour, inching east through the rush-hour madness of Interstate 40, in need of an escape. From work. From the city. From the dishes in our sink and the emails in our inboxes. From the endless to-do lists. From one utterly adorable but early-rising toddler.

We arrived a little weary, a little hungry, perhaps even a little skeptical. We’d read the glowing reviews for The Umstead Hotel and Spa. We’d heard friends gush about the elegant design, the legendary service, the peaceful surroundings. But really, how remarkable could the place be? How different from its name-brand, big-chain brethren?

The weariness, the hunger, the skepticism — it all began to fade the moment we turned onto Woodland Pond Drive. A friendly valet whisked away the car; a friendly bellhop whisked away our luggage. We slipped through the glass doors of the Umstead, and the outside world and its worries melted away.

Inside, the lobby was all earth tones and warm woodwork, freshly picked flowers and floor-to-ceiling windows. Stunning artwork covered the walls. A man sat at the gleaming grand piano, playing an old Jackson Browne tune.

The last of the week’s business travelers were filtering out, looking more rested than weary, leaving behind the weekend revelers dressed in sport coats and black cocktail dresses, who were sipping their first martinis of the evening. Couples encamped at corner tables, near a roaring fire. At the bar, a wedding party erupted in laughter, looking as if they’d just stepped out of a magazine shoot.

“Good evening. How was your trip?” a passing hotel staffer asked with a knowing smile. “Would you like to join us in the lounge?”

Would we? Of course we would. Maybe for a long, long time.

• • •
Ann Goodnight has a confession. “I have never stayed at the hotel,” she says with a laugh when we meet in the Umstead’s lounge, near a shimmering Chihuly sculpture, just steps from one of her favorite pieces of art: a bold and impressionistic nature scene from West Virginia artist Lynn Boggess.

Goodnight and her husband, Jim, are majority owners of SAS — the global business analytics software giant that he cofounded in 1976 and still oversees as chief executive officer. They decided a decade ago that the Triangle area was overdue for a world-class hotel. SAS was growing and thriving, attracting regular VIP visitors to its sprawling Cary headquarters, and other companies were flocking to the Research Triangle. The Goodnights believed that the steady stream of scientists, business executives, and tech wizards needed a luxury hotel.

The couple approached the Four Seasons and Ritz-Carlton, hoping to convince one of the chains to build in the area. Both declined. So the Goodnights set to work building their own hotel from scratch. “Our goal was a five-star [rating],” says Ann, the driving force behind what the Umstead would become. “Just the ultimate in hospitality.”

The couple hired a high-end Dallas architectural firm and renowned Boston designer Frank Nicholson, whose work includes The Breakers in Palm Beach and San Francisco’s Four Seasons. The result is a marvel of Texas limestone and glazed glass, rising from a dozen pine-covered acres at the edge of the SAS campus. Every inch is a testament to taste, sophistication, and relaxation.

When the Umstead opened in early 2007, Raleigh’s News & Observer declared that it was “shaking up the local hospitality industry like never before.” It became one of only three hotels in the state to be awarded a five-diamond designation from AAA. 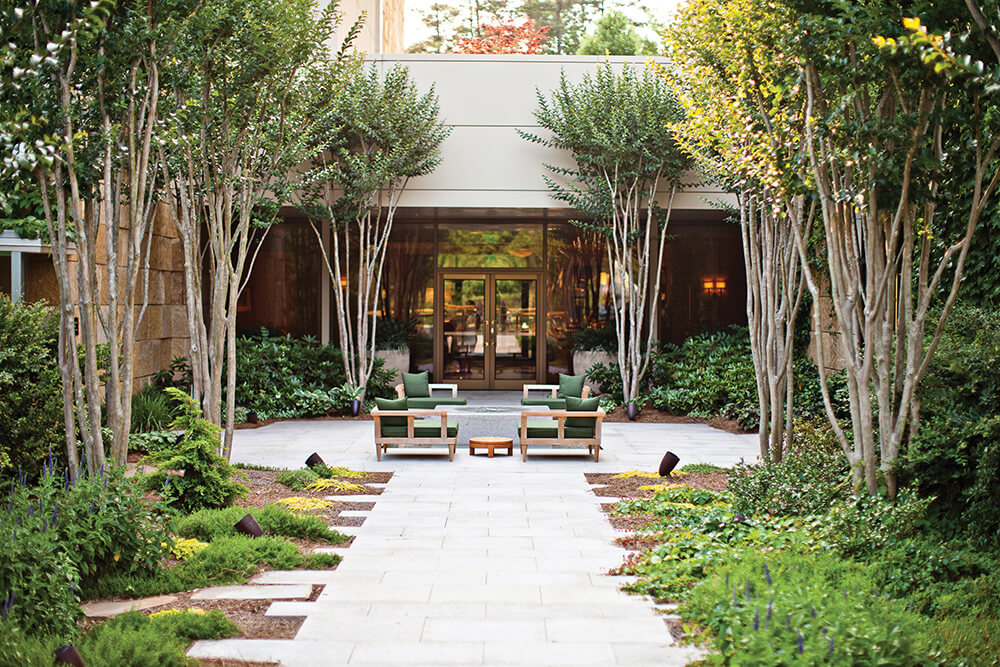 Nicholson said his goal from the beginning was to create a hotel that would stay “relevant and not trendy.” He wanted to ensure that the Umstead “didn’t feel like a big commercial hotel; that it was more of a retreat.”

That vision has held true. Even as the world around it has sped up and become more connected than ever, the Umstead endures as a sanctuary, a rare retreat in the heart of the tech-crazed Triangle.

The spa and conference areas are bigger now than in the beginning. The art collection has expanded and evolved. But the Umstead has remained true to the Goodnights’ original vision of the ultimate in high-end hospitality. It remains a genuine escape, even as escaping from the outside world gets harder to do.

The Goodnights have an understandable excuse for not having stayed at the Umstead: They live hardly a mile down the road. But as regular travelers, they have plenty of opportunities to check out the competition around the country and the world.

“I always come back very proud of what we’ve done,” Ann says.

• • •
We could have spent the entire weekend in the room itself, where the answer to every want and need sat almost literally within reach, from the white truffle herb chips in the minibar to the Keurig coffeemaker to the chocolate on a bedside table. There were two televisions, a spacious living area, and a sprawling balcony with views of a serene lake. There were new bath slippers on each side of the bed, buttons to summon room service and housekeeping, a keypad to change the lighting or to activate a virtual “do not disturb” sign.

But there was too much to explore at the Umstead to linger for long. Should we take the complimentary bicycles for a spin around the wooded trails nearby? Check out the afternoon tea with live harpist accompaniment? Take the self-guided art tour featuring renowned local and regional artists and an extensive North Carolina pottery collection?

The Umstead endures as a sanctuary, a rare retreat in the heart of the tech-crazed Triangle.

My wife headed for a free Saturday morning yoga class, seeking her own form of peace and quiet. I wound up at the Umstead Spa, a 16,000-square-foot utopia of granite, bamboo, glass, and river rock. For me, it was enough to turn off my cell phone and settle into a comfortable chair in the men’s lounge beside a warm fire, book in hand. To take a long dip in the therapeutic whirlpool tub, while contemplating the pine trees outside the picture window. To soak in the sweaty solitude of the steam room.

“I want to create a memory,” Steven Devereaux Greene had told us as he geared up for that evening’s dinner crowd at Herons, where he is executive chef. “If you go to a five-star restaurant and you think, ‘I feel like I could do this at home,’ then I’m not doing my job.”

Greene is soft-spoken and amiable, a small-town boy from Ninety Six, South Carolina — population 2,045 — who grew up admiring his grandmother’s cooking and the way she looked after those who sat at her dining table. But he’s also an imaginative, accomplished chef who has worked stints at the French Laundry in California and other dining meccas, and who for years ran his own restaurant in Greenville, South Carolina.

“Come tonight,” he said. “You’ll see what I’m talking about.”

That evening, we sat down at a table at Herons, entirely unprepared for the experience that unfolded over the next three hours. First, a cloud of coriander essence rose from a bed of fresh oysters. A pheasant corn dog was followed by foamy almond gazpacho that melted on the tongue. Quail and pork were cooked three ways. A violet potato soup. An eggplant fritter. Bread with truffle butter. Each course came perfectly paired with wine from Argentina or Austria, from Italy or Oregon, or from North Carolina’s Yadkin Valley.

It was, as promised, an unforgettable experience.

Afterward, we took a long walk along the nature trail outside, two slightly tipsy souls strolling at the water’s edge, with the Umstead glowing in the distance. We talked not about work or chores or children. We forgot about emails and to-do lists. We laughed. We reminisced. We breathed deeply. We took time, literally, to stop and smell the flowers.

The escape was complete.

Back in our room, we found a handwritten note on a bedside table — one last, unexpected delight in a hotel full of them — that perfectly summed up a stay at the Umstead.