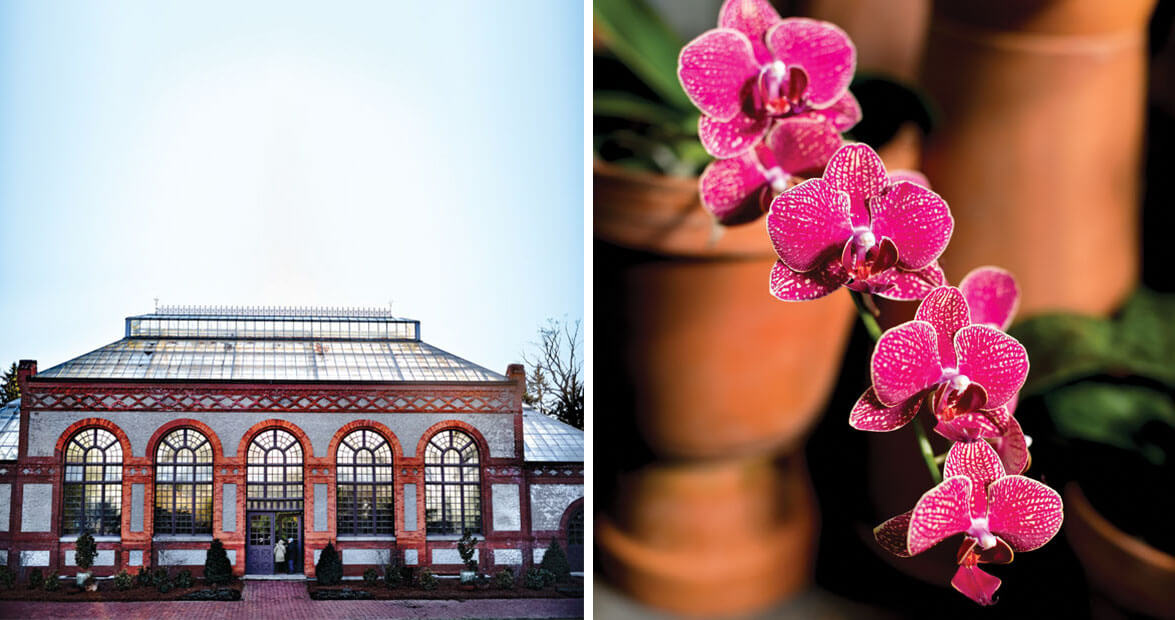 In Victorian England, the craze for collecting rare orchids was so intense that a term emerged to describe it: orchidelirium. Orchid hunters bushwhacked through jungles and forests — risking perils such as dysentery, tiger attacks, and tribal beheadings — to find the most stunning species for wealthy buyers back home. To possess a flower so sublime that it could only grow, say, on one slope of one mountain on one tiny Pacific island was regarded as more than a status symbol. It was a kind of human triumph.

Fewer orchids than orchid hunters survived the journey home, but those that did found new habitats in conservatories, the grand glass jewel boxes built on estates to display exotic plants from around the world. Horticulture standards being high in the 1800s, a gardener tending one of these man-made Edens might apprentice for two years before earning the privilege of watering the orchids. But for one orchid grower in 2019, those standards aren’t quite high enough: “I don’t let anyone else water my orchids,” says Marc Burchette, who oversees all things Orchidaceae at Biltmore’s Victorian-era conservatory. After 25 years of collecting orchids and five years of tending and expanding Biltmore’s collection, Burchette knows all too well that “some orchids are persnickety. Well, they’re all a little persnickety,” he admits. 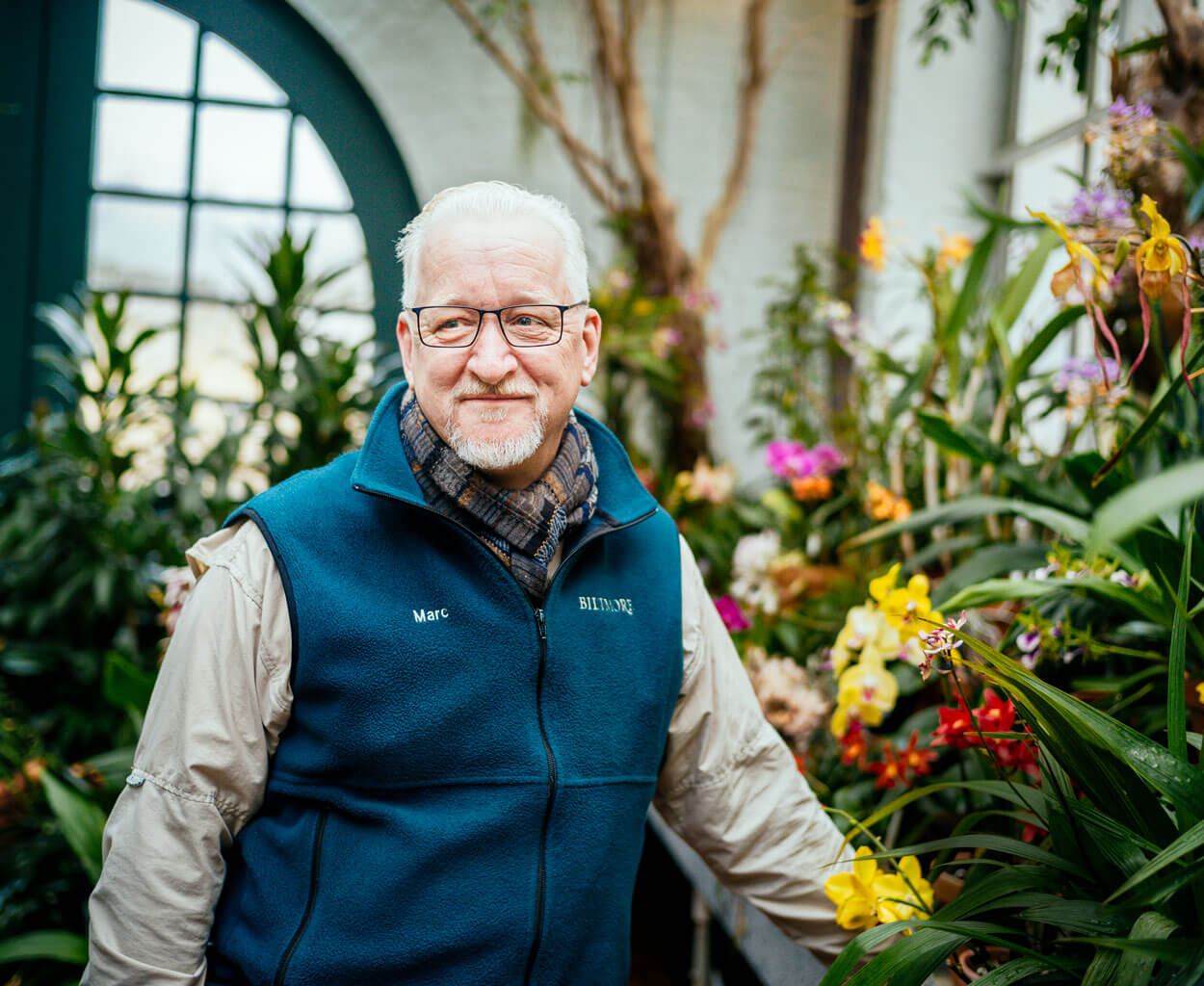 Burchette is part of the team that cultivates, coddles, and arranges the conservatory’s plants — from plump little succulents to towering palms to countless candy-colored blooms shaped like powder puffs and torches and tassels and wads of string and Georgia O’Keeffe paintings come to life. If not persnickety, it’s fair to say that these professional plant lovers are meticulous stewards of all that grows beneath the conservatory’s 40-foot ceiling. With each new season, plants from the estate’s greenhouses rotate into the 7,000-square-foot building, but only when they’re looking their best — foliage at its finest, buds about to burst. 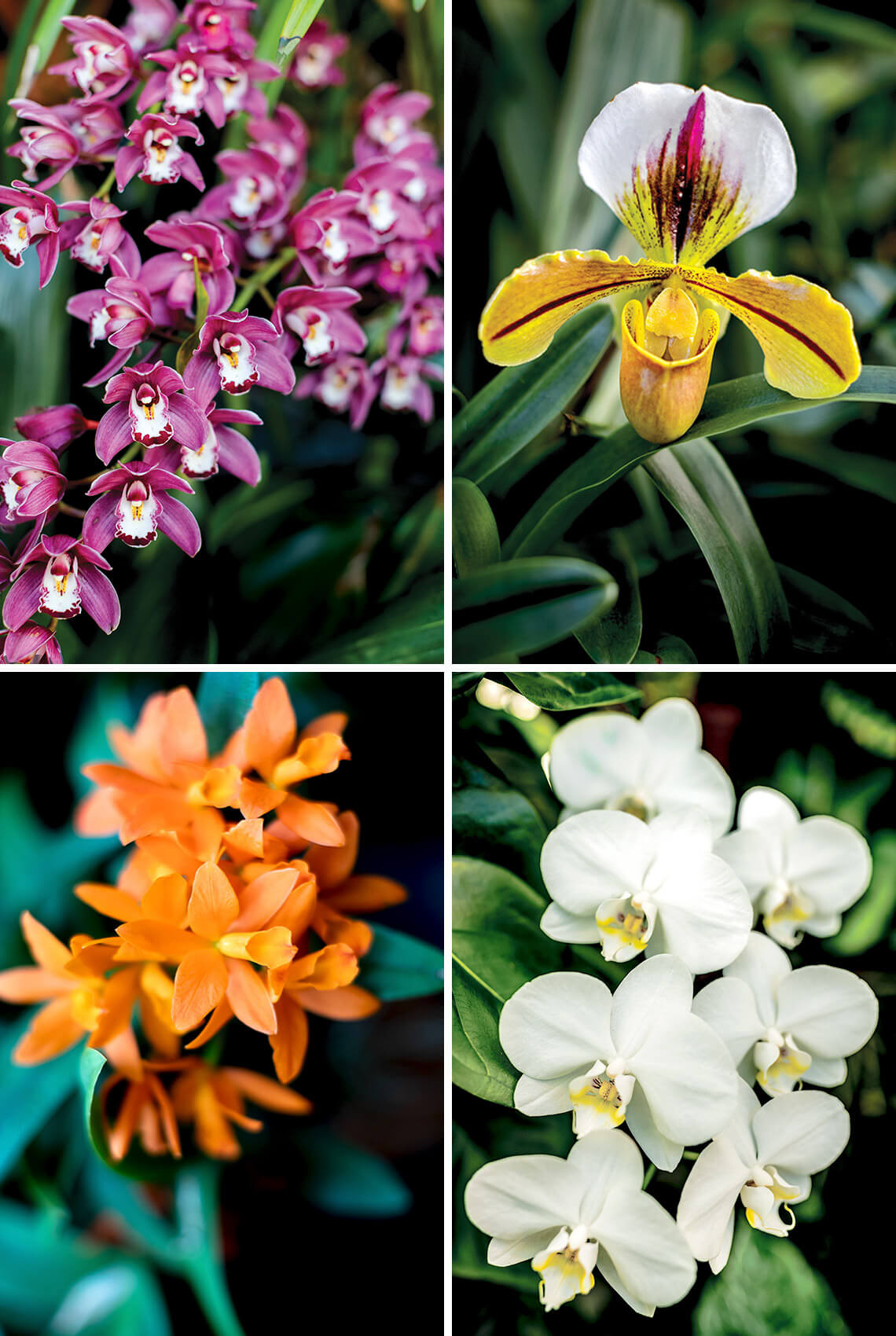 “We want guests to be amazed,” says Kathryn Marsh, a horticulturalist who shares an encyclopedic knowledge of tropical and subtropical plants with her conservatory counterpart, Todd Roy. “This building, this collection, is meant to teach and educate,” she says. “We try to make it a living portrait. A work of art.”

George Vanderbilt’s conservatory was never meant to be a practical garden: No edible fruit trees. No fragrant bunches of rosemary for the cook to snip. No tangle of melon vines or beds of beet tops or rows of frilly lettuces. In fact, when Frederick Law Olmsted, who designed Biltmore’s grounds (and, before that, Manhattan’s Central Park), suggested adding a sensible crop of vegetables, Vanderbilt balked, saying that he wanted only “a garden of ornament.” And so, a list was compiled of the fashionable plants of the day — azaleas, roses, violets, palms, and orchids — whose origins spanned the globe from the Himalayan foothills to the Amazon basin. And when George’s bride, Edith Stuyvesant Dresser, moved to the estate in 1898, she added her favorite carnations, chrysanthemums, and sweet peas to the roster. 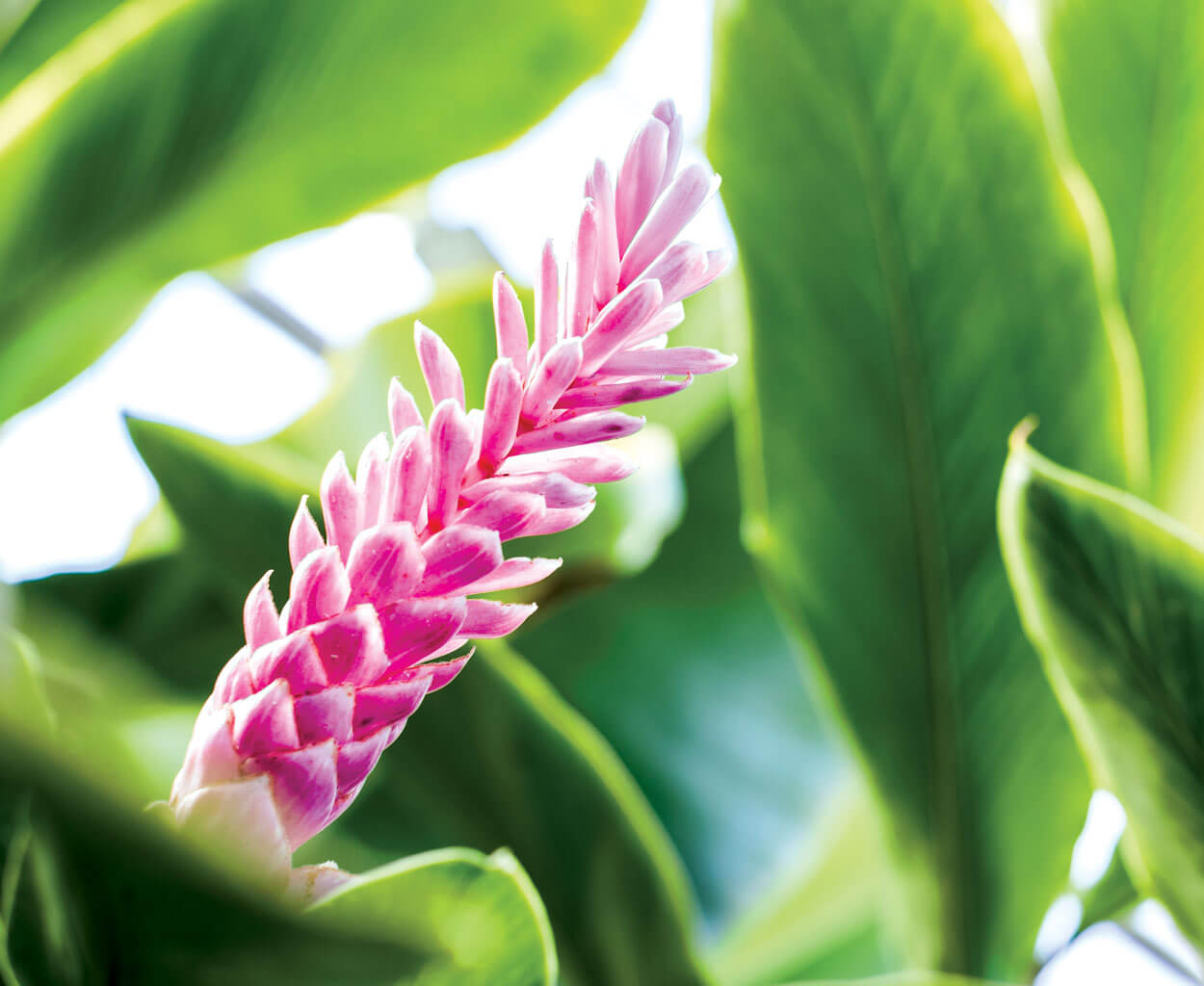 In the Palm House and elsewhere, the torch-shaped pink flower of the ginger plant adds a flash of color to the surrounding layers of green. photograph by Charles Harris

Today, the Vanderbilts’ vision remains mostly unaltered. The formal glass-and-brick structure, designed by the same architect as the main house, is a portal to a different era, a time when ornament was everything. The architect positioned the conservatory down the hill, past the terraced gardens, so that its imposing size wouldn’t compete with the scale of the house. Approaching it from the front, the tall, arched windows frame huge botanical shadows that are even more striking in winter, when it appears as though nature has inverted itself, growing indoors instead of out. 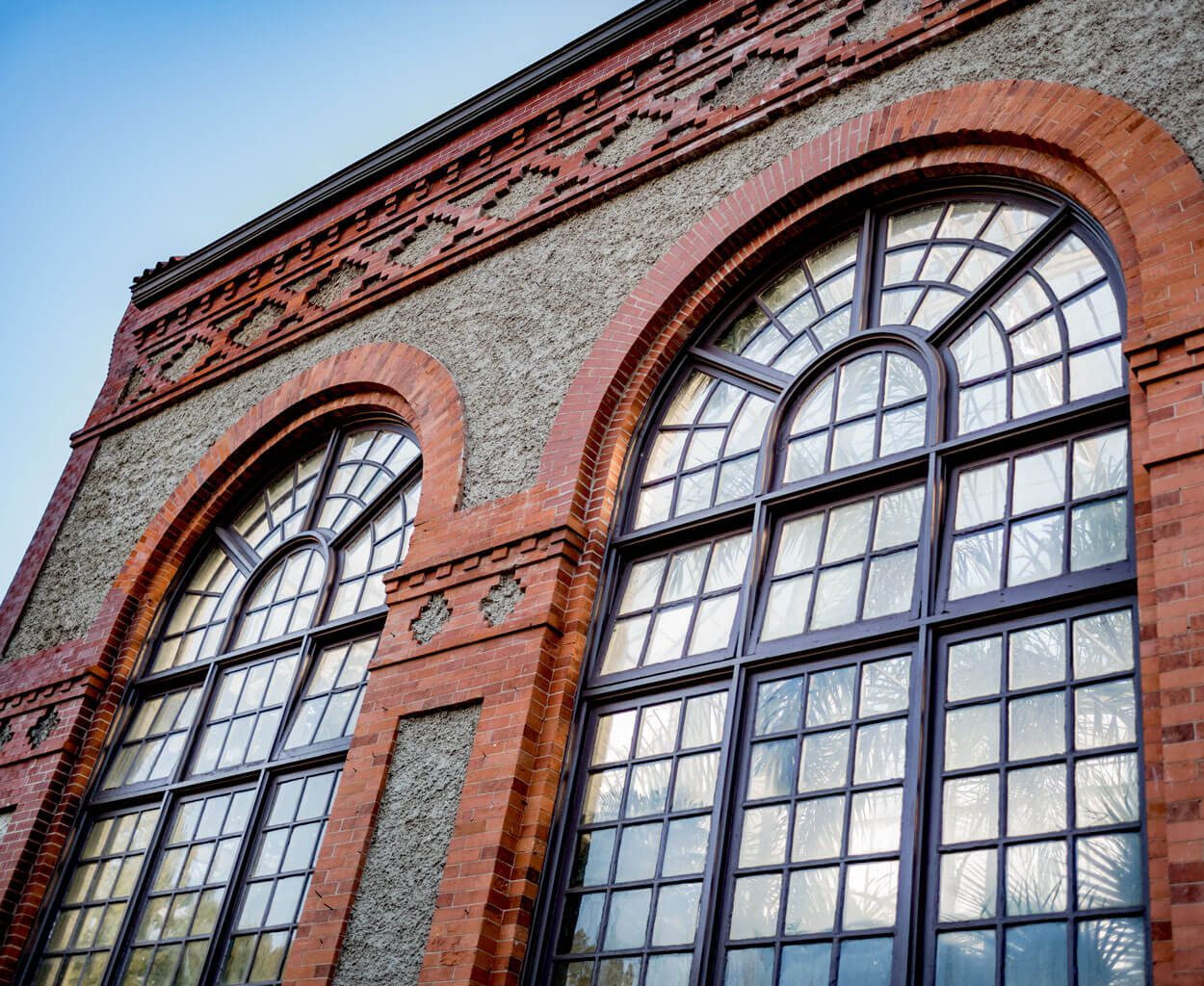 The five arched windows in the front of the conservatory offer a glimpse into the central Palm Room, a lush and steamy landscape of ferns and fronds of all shapes and sizes. photograph by Charles Harris

Inside, reading glasses fog up immediately. The air is dewy and loamy compared to the dry chill of a winter afternoon. Marsh mentions that regular visitors, like the long-married couple who brought breakfast pastries to share on a bench in the Sitting Room, especially love the quiet of the conservatory after the holiday crowds have dispersed. Laid out in an E-shape, the rooms and arrangements naturally flow into each other, and are conspicuously free of the Latin nomenclature plaques that clutter most arboretums. “We want something more relaxed,” Marsh says. “We want people to wander, ask us questions, just take it all in.” 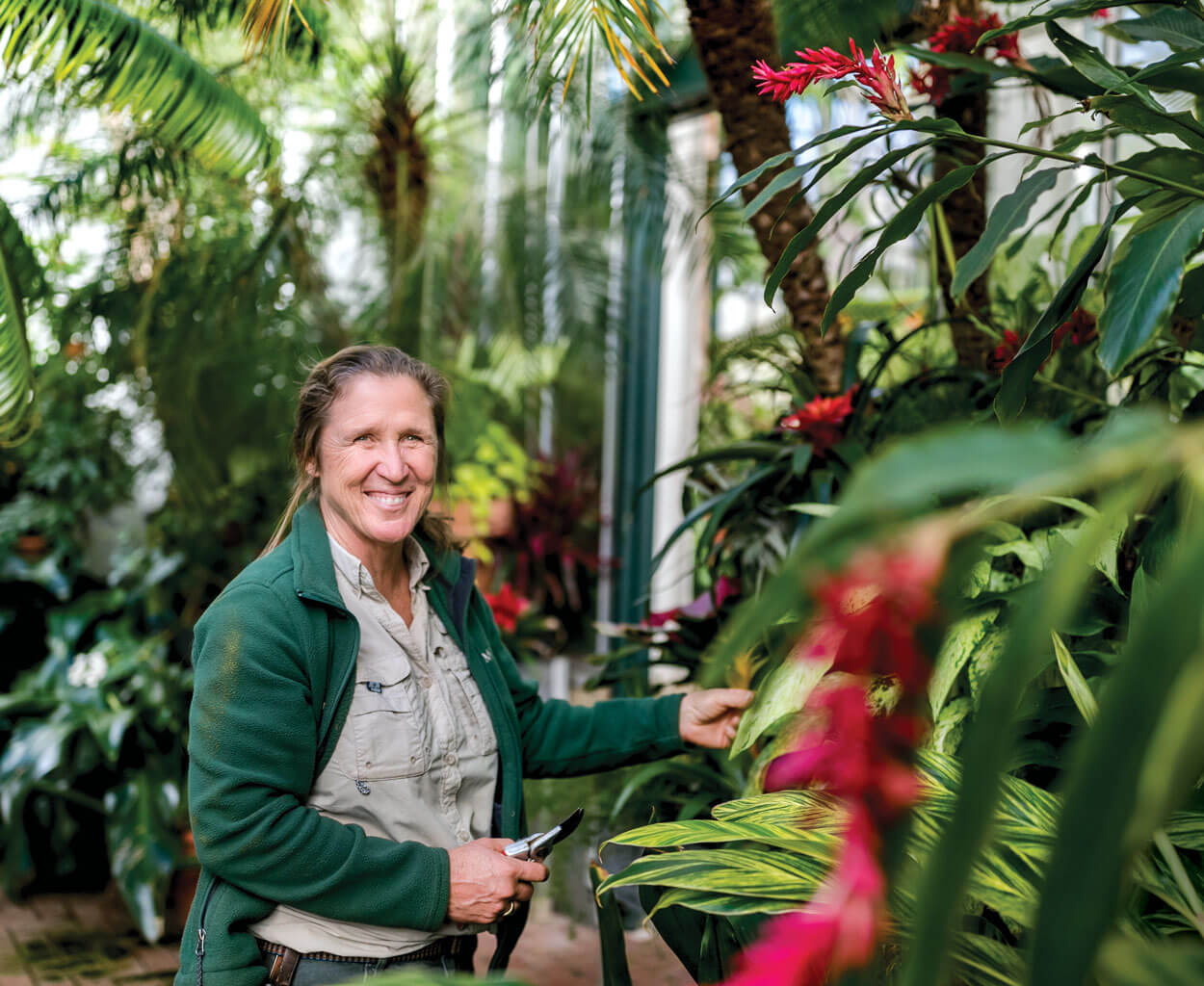 Beneath the 40-foot ceiling in the Palm Room, conservatory horticulturalist Kathryn Marsh is surrounded by her favorite family of plants: gingers. photograph by Charles Harris

The conservatory has gone through two renovations, so none of the original plants remain. But Marsh, Roy, and Burchette draw inspiration from the Vanderbilts’ original lists of species when they add to the collection. Biltmore archivists have even unearthed the list of 800 orchids that George requested in 1894. Some 300 different types of orchids rotate in and out of the Orchid Room today; most are hybrid varieties rather than the rare species hunted and coveted in the 1800s. Burchette nurtures his private collection of more than 1,000 orchids at his own 600-square-foot greenhouse, and many of those make it into the conservatory as well. “We’re kind of odd, orchid people,” he says. “We’re kind of like plant hoarders.” 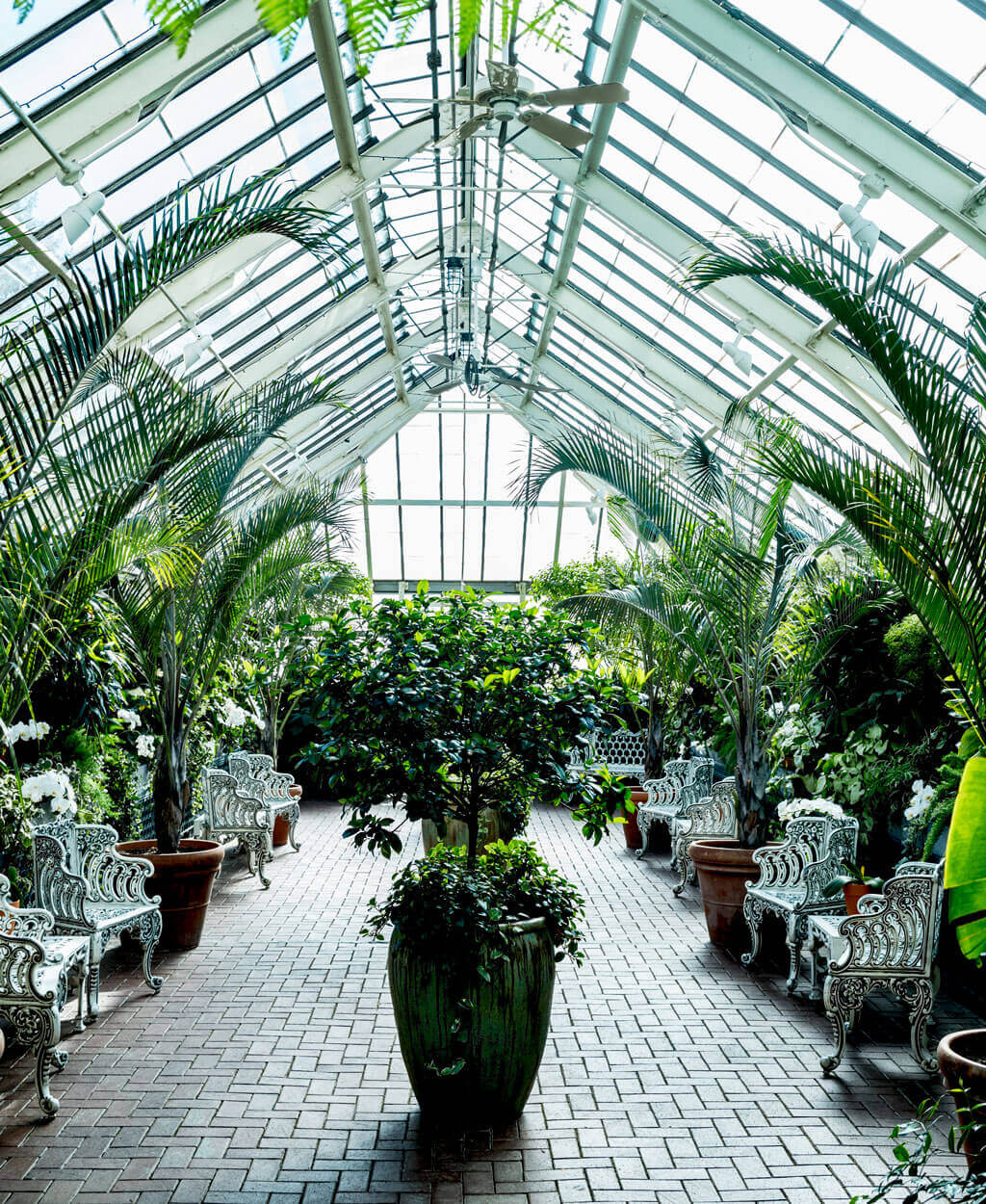 The Sitting Room, which was the original Orchid Room, gets a fresh rotation of plants each season — poinsettias at Christmas and forced bulbs like tulips in spring — making it a year-round oasis for visitors. photograph by Charles Harris

His orchid nursery at Biltmore is actually smaller than the one he uses at home — but packed with orchids just the same. “And I know every one of them,” he says with a chuckle. Here, the plants are mostly pre- or post-bloom, their slouchy green leaves offering no hint of the spectacular transformation to come. Rows of Phalaenopsis — the typical grocery store orchid — will pop with yellow, white, or purply-pink flowers. Miniatures, as tiny as a thumbnail, cling to mossy wood, while Vandas, a variety of hanging orchid, trail Spanish moss around their roots to hold in moisture. Some of the big, showy Cattleyas, the traditional corsage orchid, will soon bloom, too, and make their way, along with the others, to the Orchid Room. 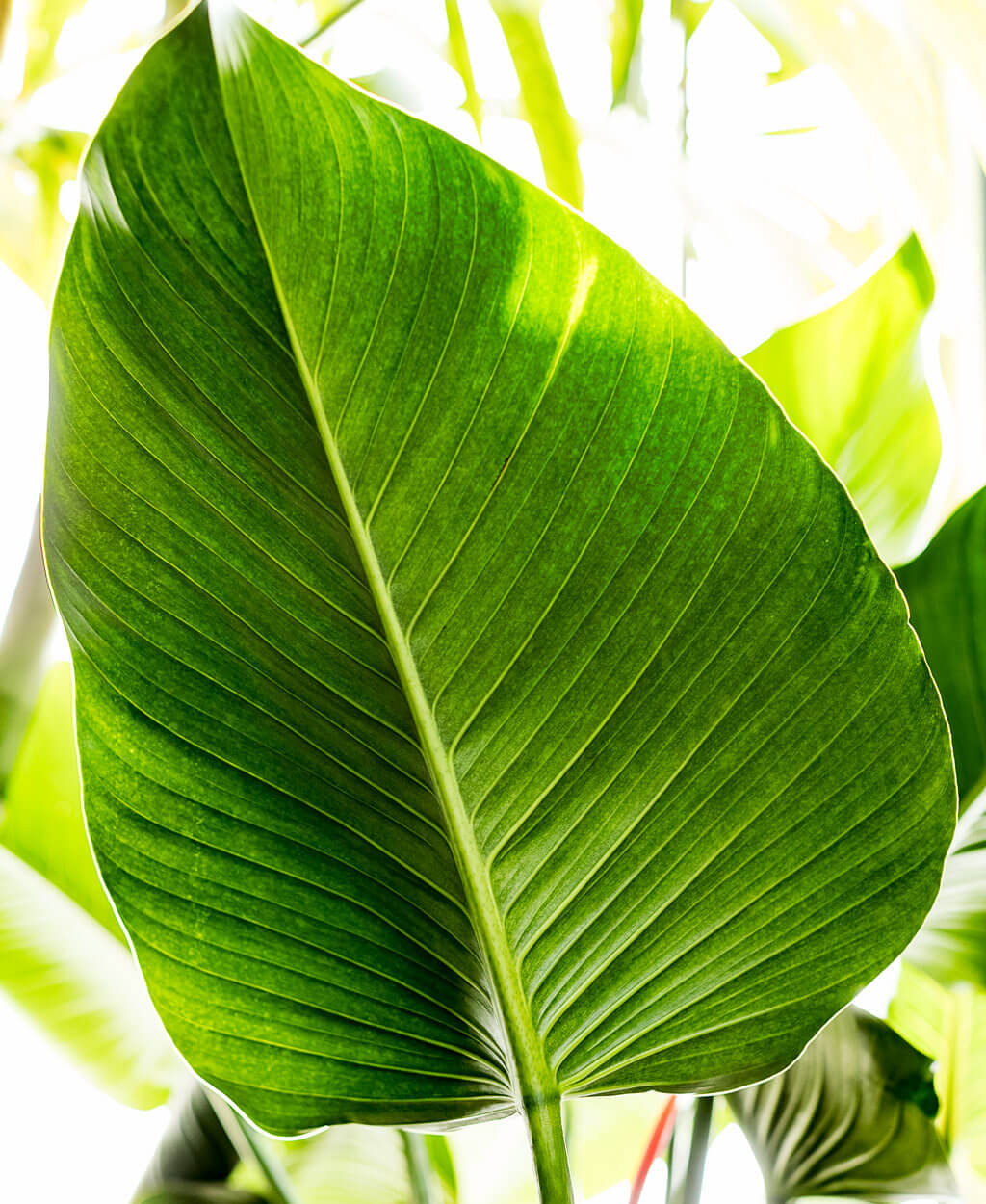 Most of the plants are native to tropical habitats around the globe. Displayed together, they form a seamless ecosystem where even this massive philodendron frond can fit right in. photograph by Charles Harris

“Here are my slippers!” Burchette calls out from behind a blockade of green. It’s taken many years to nurture his collection of Cypripedioideae, known as slipper orchids, from seed to maturity. Much of his orchid collection — and, at this point, Biltmore’s collection — has come from Burchette’s orchid-obsessed friends. One plant that’s three and a half feet across was given to Burchette by a local friend. Its stalks are nearly ready to burst into hundreds of tiny purple blooms. “Plant people are generous people,” he says. Last year, a guest left a nearly dead orchid for him to revive: “Just a bag sitting on the plant bench, and inside was this sad orchid in a pot. We brought it back to life.”

Saving orchids is as much a part of Burchette’s job as collecting and tending them. At the talks he gives in the Orchid Room from January to March, someone inevitably asks him how to get a seemingly temperamental orchid to flower again. Or, simply, how to keep the darn thing alive. “The biggest misconception people have is that all orchids are hard to grow,” he says. “People are really disconnected from how to grow things in general.” 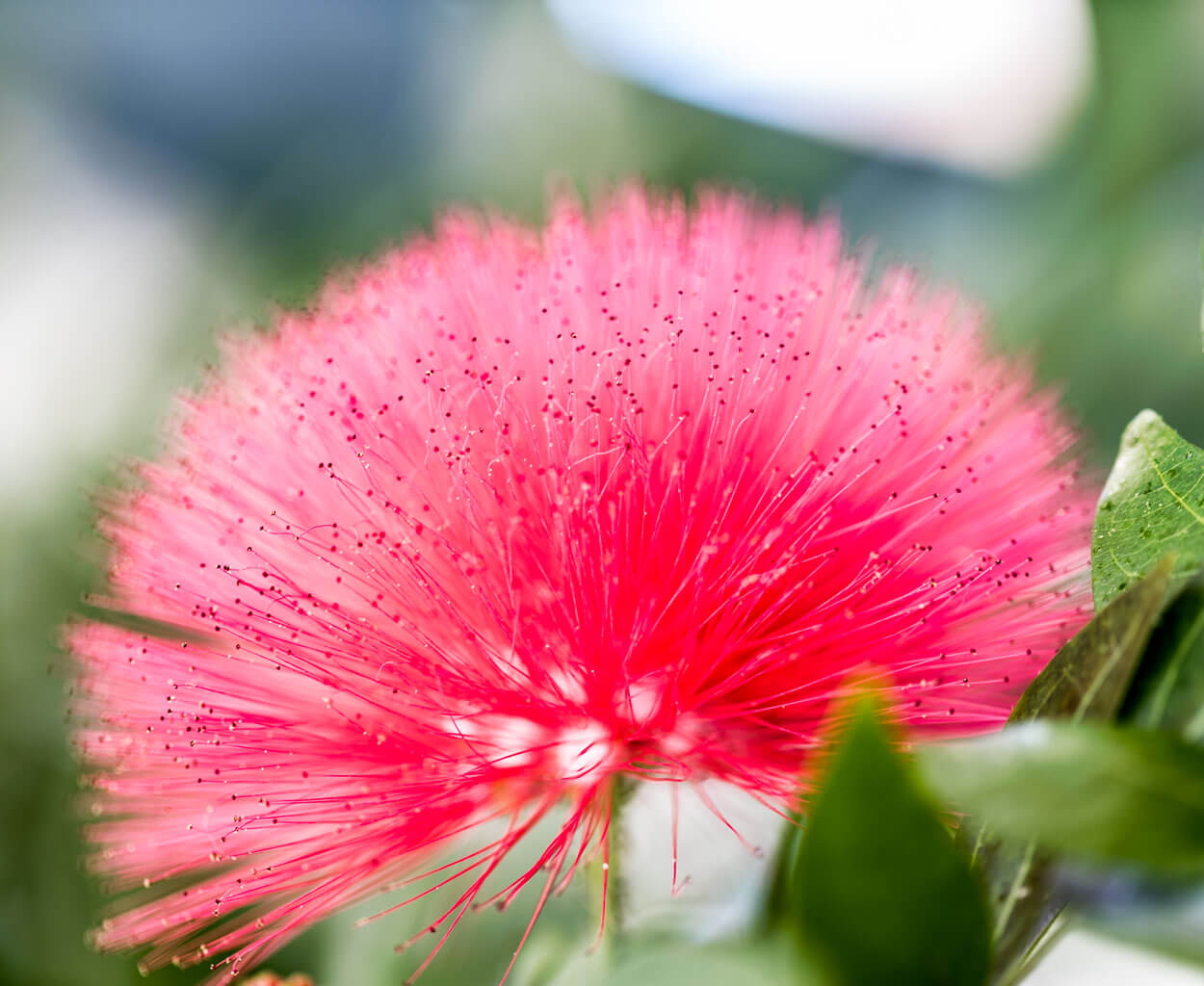 Orchids are not as fragile as people think, Burchette says. In the wild, they do just fine in all sorts of inhospitable climates, and they’re found on every continent except Antarctica. There’s even an orchid that grows in the Arctic tundra. To prove this point, conservatory guests are allowed to interact with the plants, smell them, gently touch their foliage — just not too much. Sometimes, Burchette finds bits of twigs or leaves that young guests have tucked in the lip of a slipper. And visitors have been known to walk off with fragrant vanilla bean pods — the fruit of a vanilla orchid. But the conservatory staff shares a philosophy that the displays in this special place should be as approachable as houseplants growing on a windowsill. “You could put everything behind barriers,” Burchette says, “but, really, how much fun would that be?”