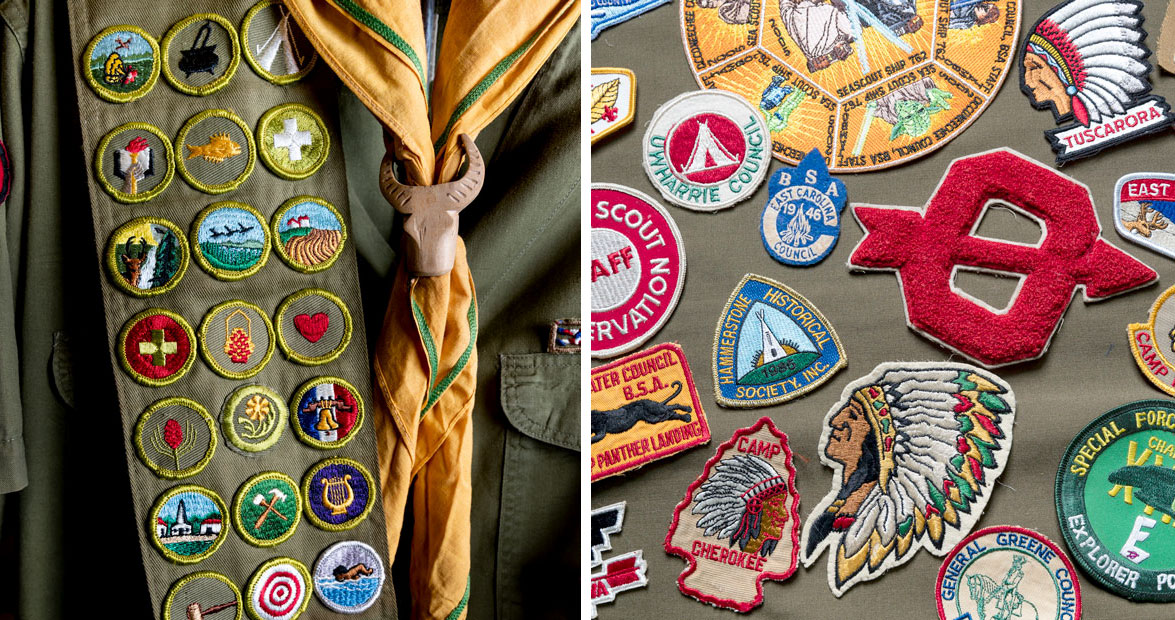 If punctuality had been included in the Boy Scout Law, my youngest son, Emmett, and I would be in flagrant violation. As it is, we’re bending the spirit of courteous — No. 5 on the Scout Law list — because Wayne Farrar’s museum is by appointment only, and we’ve kept him waiting in the heat. Wayne, fortunately, is the Scout code incarnate. He made Eagle Scout 40 years ago, which is less a momentary achievement than a permanent molding. He is friendly and cheerful and kind, despite our tardiness. He is also reverent, presumably toward his God and, more to the immediate point, toward the history of Scouting generally and North Carolina Scouting specifically.

Which is why I’m pulled off a country road in Lillington. Thirty-five years ago, Wayne and some friends founded the Hammerstone Scout Museum in what was a decrepit farmhouse that should have been bulldozed, except Wayne needed a place to put all of his Scout memorabilia, and his parents let him fix it up. In the decades since, it’s been expanded and stuffed with artifacts, hundreds of thousands of pieces that, together, tell a pixelated history.

Emmett is 10, a fresh recruit, still a Cub Scout, and I wanted him to see the whole sweep of Scouting, where it had been and where it could take him. I thought he’d want to see it, too. And the museum is a wonderfully chaotic accumulation, not so much displayed as accreted, a century of historic flotsam gathered from swap meets and eBay and the estates of Boy Scouts who became old men.

There are Scout uniforms — a hundred years’ worth — and mess kits and pocketknives and scrapbooks and souvenir coffee mugs, hundreds of them hanging from hooks. Outside, at the edge of the trees behind the building, there are even Adirondack shelters scavenged from Camp Durant in Carthage, including the one that Wayne and his brother graffitied with their names back in 1976.

And there are patches, thousands and thousands of them. If Wayne had to guess — which he does, because he’s never done a proper count — he’d put the number at about 50,000. Most are historic trinkets, tales of camps and Scout-O-Ramas and jamborees told in faded embroidery. And some are from his own Scouting life. “If you go to camp when you’re 11 years old and you get a patch,” Wayne tells me, standing over a big plexiglass-covered conference table full of patches, “10 years later, you can look at it and it means something. It brings back the memories.” 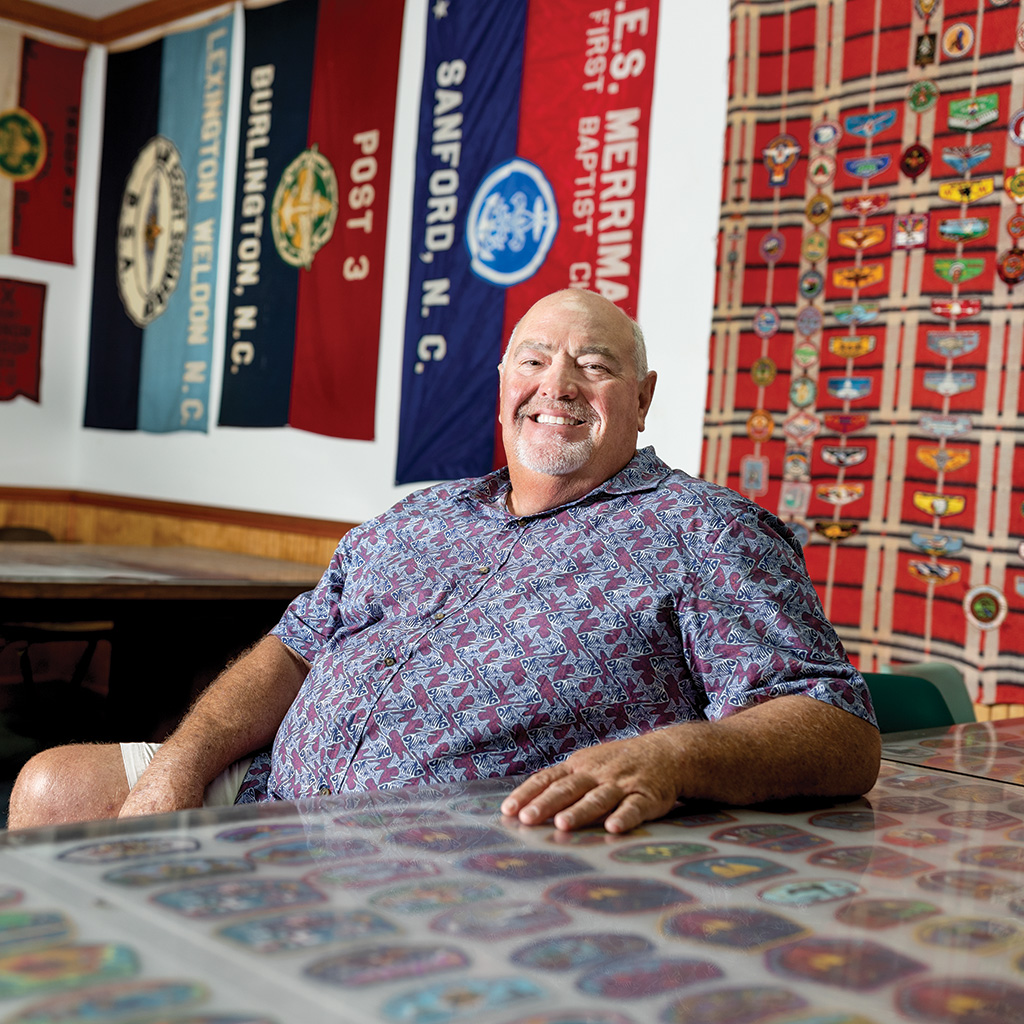 Wayne Farrar has collected some 50,000 Scout patches from around the world. The ones under plexiglass are from the 1993 National Jamboree. photograph by Charles Harris

He pauses, seems to consider that for a moment. “That Leave It to Beaver, Norman Rockwell image of America — I guess that’s where I’m coming from,” he says. “It’s not about me. I’m part of it, but the story of all this is about what Scouting has done for so many boys. And a lot of people who haven’t been a part of it, maybe they don’t know.”

I don’t know. I was never a boy scout, and to the extent that I thought of Scouting at all, it was only that the neckerchief was an unfortunate accessory. But then, last fall, Emmett announced that he wanted to be a Cub Scout. Despite the lack of family history, this did not strike me as odd: Emmett has always seemed like a Scout, at least in the way I imagined Scouts to be. He likes rocks and gems, and rocks that might be gems that he used to dig out of a big hole in the yard that he called his “mine.” He hikes. He used to climb out of bed at night and build spectacularly complicated machines with dental floss and masking tape and little wooden planks; for a brief while, floss and tape were delightful gifts. He likes to whittle and make stone axes and purify his own clay to make pinch pots and smelt aluminum cans into ingots. He asked for a real hatchet at 6, and he got one at 8.

We signed him up and bought him a uniform and took him to den meetings at a Methodist church. He’s assembled a first-aid kit for the family and built a birdhouse and figured out the placement of weights in a pinewood derby car well enough to finish third. He’s eaten an enormous number of s’mores. And I’m learning. I attached Emmett’s patches — his pack, his den, an American flag — straight and centered on the shoulder of his uniform. I figured out how to pitch a tent and learned charmingly dorky campfire songs like “The Jellyfish,” which involves physical contortions and what sounds like a German accent. I know to say “white rabbit, white rabbit” when the campfire smoke blows my way, though I still have no idea why. 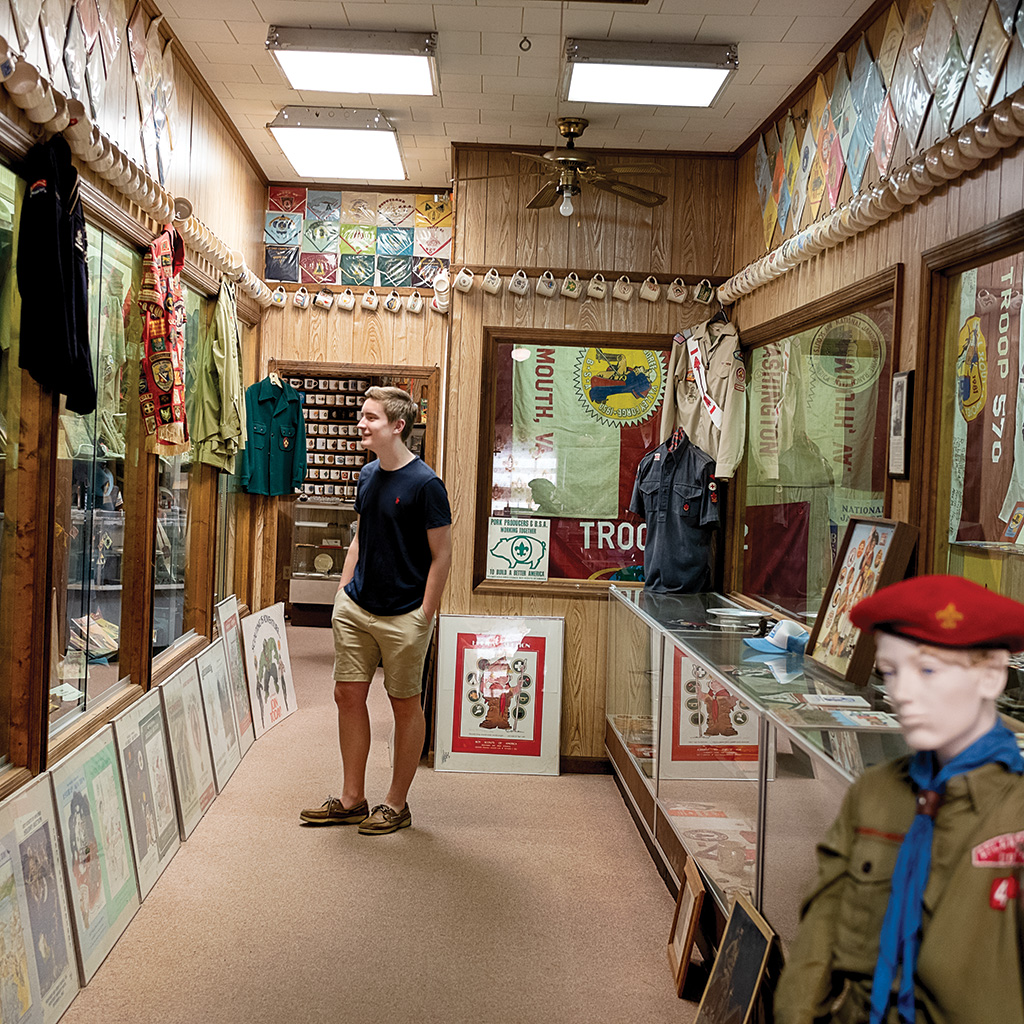 None of this was my childhood. But it will be Emmett’s, and I don’t want to screw it up. I can’t share any wisdom, can’t pass down any lore or even tell a good campfire story. I’m stumbling through it with him, still neckerchief-averse but otherwise game. This museum, I figured, could shave a few degrees off our learning curve. I imagined that, years from now, Emmett would remember that time he saw all the cool old stuff with his dad and Mr. Wayne, who told a million stories, and that’s when he knew, right then, that being an Eagle Scout would be awesome.

And Wayne did tell stories, the best and worst of which began in 1971, in the middle of his own childhood. Jordan Lake flooded his family off their farm, forcing them to relocate to Harnett County. Wayne was 9 years old, the new kid on the first day of fourth grade. There weren’t enough books to go around, and the teacher asked if someone would share. A hand shot up — Clay Knight. Clay introduced Wayne to his best friend, Reggie Rosser, and immediately they were all best friends. In March 1973, when they were 11, they joined Boy Scout Troop 762.

They went to camp for the first time that summer. They promised each other they’d be Eagle Scouts someday. That fall, a knot swelled on Clay’s neck. Leukemia. He died seven months later, on April 1. “Just one of those stories,” Wayne says. “Three little boys in a tent, pledging to earn their Eagle. Two of them did; one didn’t.”

Clay’s Scouting year is in the museum — a T-shirt from Camp Durant, applications for merit badges, sketches of knots, a program from the Occoneechee Council Scout-O-Rama in April 1973 — in a case in front of a display of Troop 762 memorabilia. Portraits of all of the troop’s Eagle Scouts are in a row on the wall above; Wayne is near the middle, flanked by his brother and Reggie Rosser.

I’m studying all of this, captivated by this time capsule of another man’s childhood.

Emmett is not. After 40 minutes, he’s not especially interested in anything at the Hammerstone Scout Museum, which is understandable because he’s 10. He was intrigued by the arrowhead collections, and the knives and hatchets, and he hustled out back to see the shelters after Wayne mentioned that a boy got hit by lightning in one of them. But by the time Wayne tells me about Clay, Emmett is curled up, watching the end of a Fred MacMurray movie called Follow Me, Boys! that’s playing in the little theater Wayne has set up in the back room.

We return to the room with the patches under plexiglass. Wayne gives Emmett a dozen or so patches, each in pairs — one to keep, one to trade — and a few of which are rare, like the ones commemorating the 1983 founding of the Hammerstone Historical Society.

Wayne is explaining that he’s concerned for the future of the society, of his museum. He’s only 56, but what will happen to his collection when he’s gone? He knows he doesn’t have a proper museum that can be easily relocated — “I’m not a trained curator,” he says. “I’m more an accumulator and a displayer” — but he doesn’t want it all to be abandoned or sold off piecemeal. “It’s more than just souvenirs. It’s memories,” he says. “Time-honored traditions. Because when you look back, it’s all just memories.”

Emmett is fiddling with a water bottle and his new patches. He’s bored by grown-ups talking about memories. Wayne can tell. He was a Scoutmaster. The local troop uses his property for its meetings and fund-raisers, and he’s got campsites scattered on his land. He looks at Emmett. “You like to fish?”

Emmett brightens, sits up straight. “Yeah,” he says. Then he lowers his eyes and blushes a little. “Well, I’ve never actually caught a fish.”

My heart breaks a little. But it’s true.

We follow Wayne a little ways up the hill, back behind the scuppernongs and muscadines he’s planted, to a stocked pond. He’s short on bait — ants got the crickets — but he finds enough to thread on to a hook. He casts a line out, gives Emmett the rod.

It jerks. Emmett jerks back, and reels in a bluegill as big as his belly.

And I’m beaming. Because I know that a decade from now, he’ll find that forgotten patch in a drawer, the one that says Hammerstone Historical Society, and he’ll look at it and it’ll mean something. He’ll remember the day he caught his first fish, and then, maybe, he’ll remember the two of us fumbling with tent poles at campsites, blowing our lungs out making fires, gluing patches to sleeves. Together.