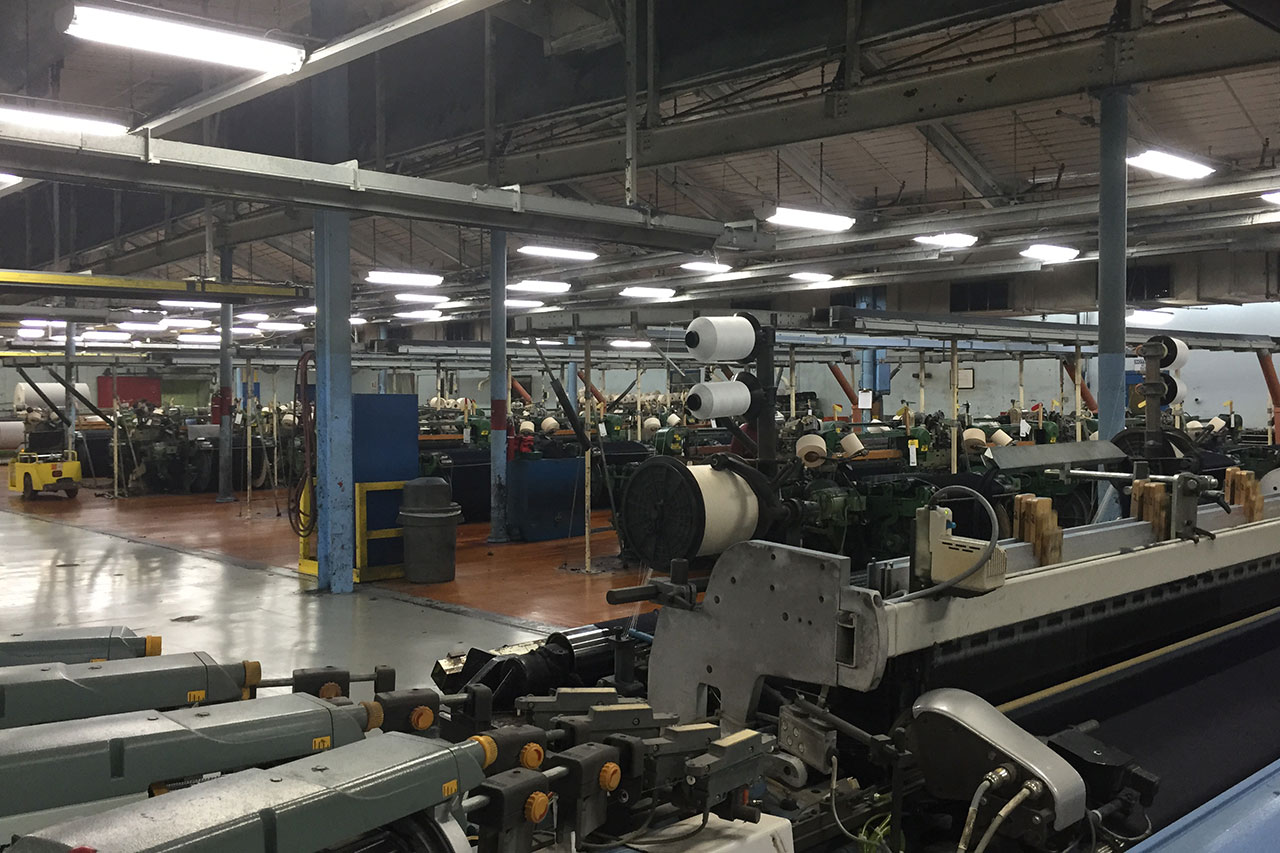 Last week, I got a look inside the Cone Mills White Oak plant on the east side of Greensboro for a story that’ll show up in the August issue of Our State. The place is enormous. Burnt-orange bricks and barbed-wire fences and gates and truck trailers are everywhere. Inside is a little museum that’s not open to the public, and to get there, they give you some foam earplugs and shuffle you across the production room floor. Here’s a taste of what that’s like:

That’s a high-speed loom turning cotton into denim. There’s a shuttle that whips back and forth and turns it all into a big roll of white fabric. At one point, Brad Johnson, who’s worked at White Oak for 27 years, leaned over and screamed into my ear to point out what was going on in front of me. I caught a few words. Brad explained everything kindly, but in a dry, expressionless tone, in a way that suggests that he knows everything there is to know about making denim and has explained this to people much smarter than I am. In a quieter place, I asked him if he could tell me, as simply as possible, why most denim is blue on one side and lighter on the other. He did, but not before cracking a monotone joke. “Well,” he said, “it’s gonna take more than five words.”

The weaving room is full of the sort of things you can gawk at, mouth open, for hours. The sheer complexity and speed of what’s happening in front of you, the belts, the bobbins, the shuttles whizzing back and forth in a flash, and the hundreds of indigo-dyed threads coming together into a dark blue roll of Cone denim, is mesmerizing. It’s a bit like staring at a campfire.

It also strikes me that this isn’t the sort of thing you see as much in North Carolina, or even in this country, anymore. Globalization is the biggest reason. Consider that, at one point, 40 percent of all North Carolina workers got their paycheck from some sort of textile work. Today, it’s closer to two percent. In Greensboro alone, Cone had four mills: White Oak, Revolution, Proximity, and Proximity Print Works (the last two now provide the names for a hotel in town and its accompanying restaurant). Now, there’s only White Oak. Even in the 1970s, about 2,800 people worked there. Today, it’s closer to 225. The plant, which has the equivalent of around 29 football fields worth of space, is currently using only about a third of it. They just don’t do as much work as they used to. At the turn of the century, White Oak workers pulled bales of cotton directly off the trains that picked them up from the fields of eastern North Carolina. Today, employees come in toward the middle of the process, using yarn from a factory in Virginia.

But, 110 years after White Oak opened, the lights are still on here, and the denim is still rolling out. Why? Selvage, which Our State took a closer look at in January 2013, is a slower-made, old-fashioned, strongly-woven denim that’s the current object of hipster affection, used in some high-end jeans from The Gap, J.Crew, and Levi’s. White Oak is the only place where selvage is made in America, on vintage looms from the 1940s that are among the last of their kind in the world. The White Oak Plant also functions as a sort of test lab for Cone. If the company wants to try something new, it’ll give it a go here before trying to produce it at a mill overseas, where Cone can crank out more of it more quickly and cheaply. And the pool of workers here has hundreds upon hundreds of years of experience. One guy, Frank Williams, has been on the job at White Oak for 60 years. He must be 80 or something, everyone says, but they only arrive at that age through the math, not the way he looks or moves. He’s still spry, they say.

These people are all working in a place where a product is being manufactured on a fairly large industrial scale, which is astonishing to see. I’m just not used to it anymore. When I was a kid in Ohio, my dad gave me a tour of the steel mill where he worked, and I remember it being the loudest, hottest, most dazzling place I’d ever seen, with glowing orange ingots and blast furnaces that rattled your bones. It’s long since closed, and that day feels so foreign to me now that it might as well be fictional. More recently, I took a look inside a new sort of factory, Facebook’s data center in Forest City, which was impressive in a much less raw way, with warehouse-sized room-upon-room of humming servers and blinking lights. In that place, the raw material consists of thoughts, pictures, and friendships instead of cotton, metal, and livestock. 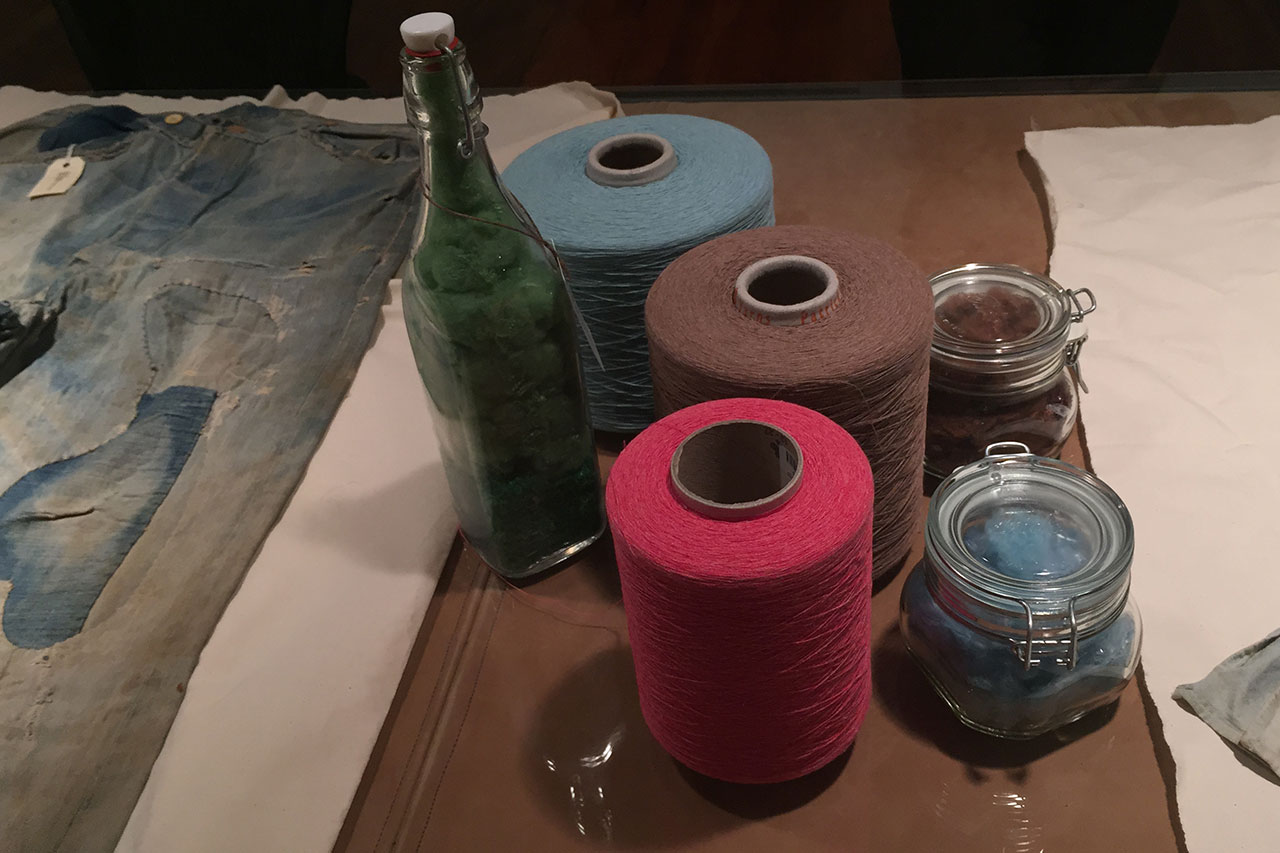 But even something as analog as thread is more complex than we’ll ever realize. Delores Sides, the Cone spokeswoman, showed me some rolls of thread, in shades of blue, brown, and red; threads made with bits of recycled coolers, beer bottles, and ketchup containers, respectively. And out in a hallway, Johnson pulled out a wad of stretch fabric and explained that part of it comes from old microwave food trays:

Back in the weaving room, the heavy old looms were still jerking back and forth, sending a constant vibration traveling down into the wooden floor and up into my legs. I lingered, watching it all happen, a bit dumbstruck at the complexity required to create an everyday fabric: denim. Even though the process isn’t something we see as often as we used to, it’s still something to see.