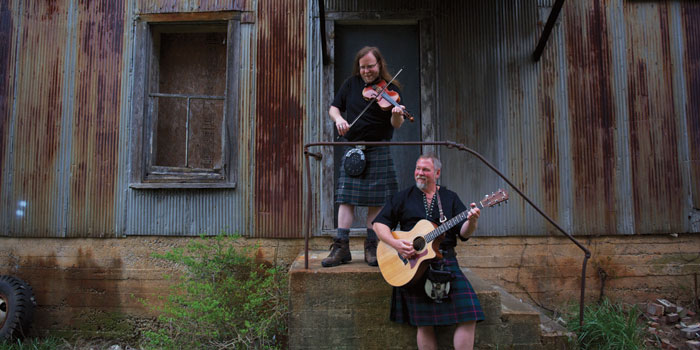 The duo walks on stage with boyish grins. Stage fright and nerves are a thing of the past. Since high school, they’ve made a living as musicians.

Trip Rogers, 48, of Matthews, and Tom Eure, 42, of Roanoke Rapids, step into the spotlight, greeted by the crowd. Their smiles widen. It’s the excitement of doing what they love that makes them beam — well, that and their kilts.

“Everybody wants to know what you’re wearing under it,” says Rogers, half of the Celtic band known as Thistledown Tinkers. They always give the same reply, “Boots.”

Both members grew up playing in bands through high school and college. Rogers played Southern rock, country, and blues. Eure played bluegrass and acoustic music. The two crossed paths, and they played together occasionally. But six years ago, Rogers and Eure came together to do something different.

Rogers attended the Grandfather Mountain Highland Games, and the celebration of Celtic culture fascinated him. So, he decided to give Celtic music a try.

“I ran across an opportunity to play some show with this kind of music,” Rogers says. “Then I needed somebody to play it with. And I knew Tom played a whole bunch of different instruments, so I called him and said, ‘We should really try this.’ ”

The pair settled on the name Thistledown Tinkers. “Tinkers have a connotation for being kind of shady, roguish creatures that travel around and fix things, and the thistle is synonymous with anything Celtic,” Rogers says.

And Eure agrees. “I liked the idea of something so fragile being hammered into shape,” he says. “That’s kind of what we are doing with Celtic music. Beating it into submission.”

Ali Rockett interned at Our State magazine during spring 2011.