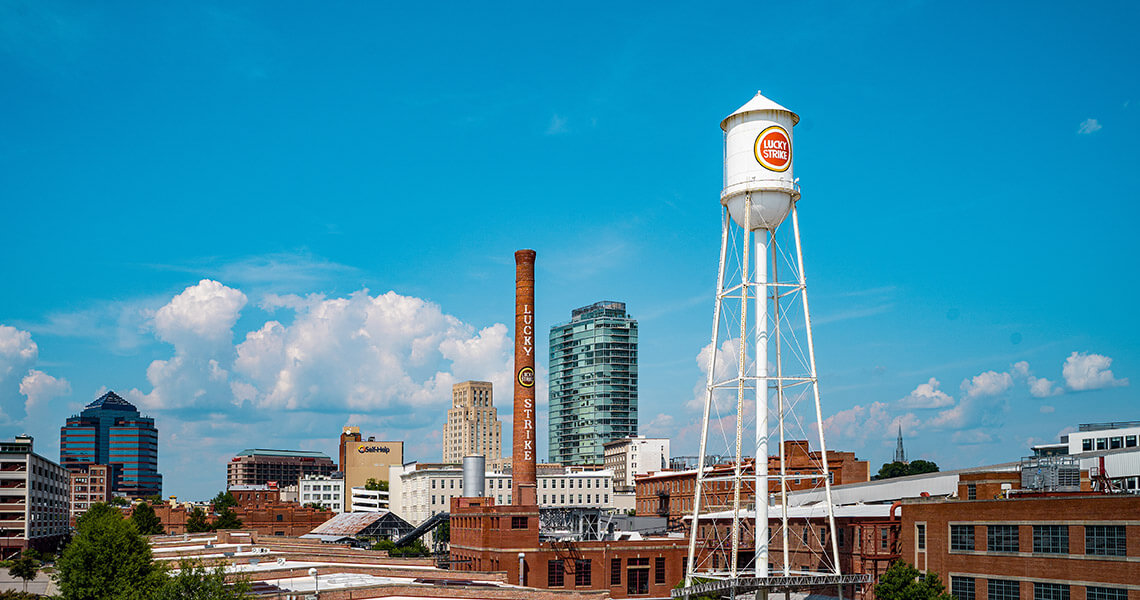 Durham — the world-famous tobacco town turned innovation headquarters — is a modern-day haven for bright minds, outstanding artists, and eclectic cuisine. But Durham isn’t turning its back on the past. Instead, the city — founded in 1869 — is continuing to honor the history held in its renovated red-brick warehouses and buildings downtown. There’s so much to see and do (and eat!) that it can be hard to know where to start — and that’s where we come in. Here’s how to spend a weekend exploring the Bull City. 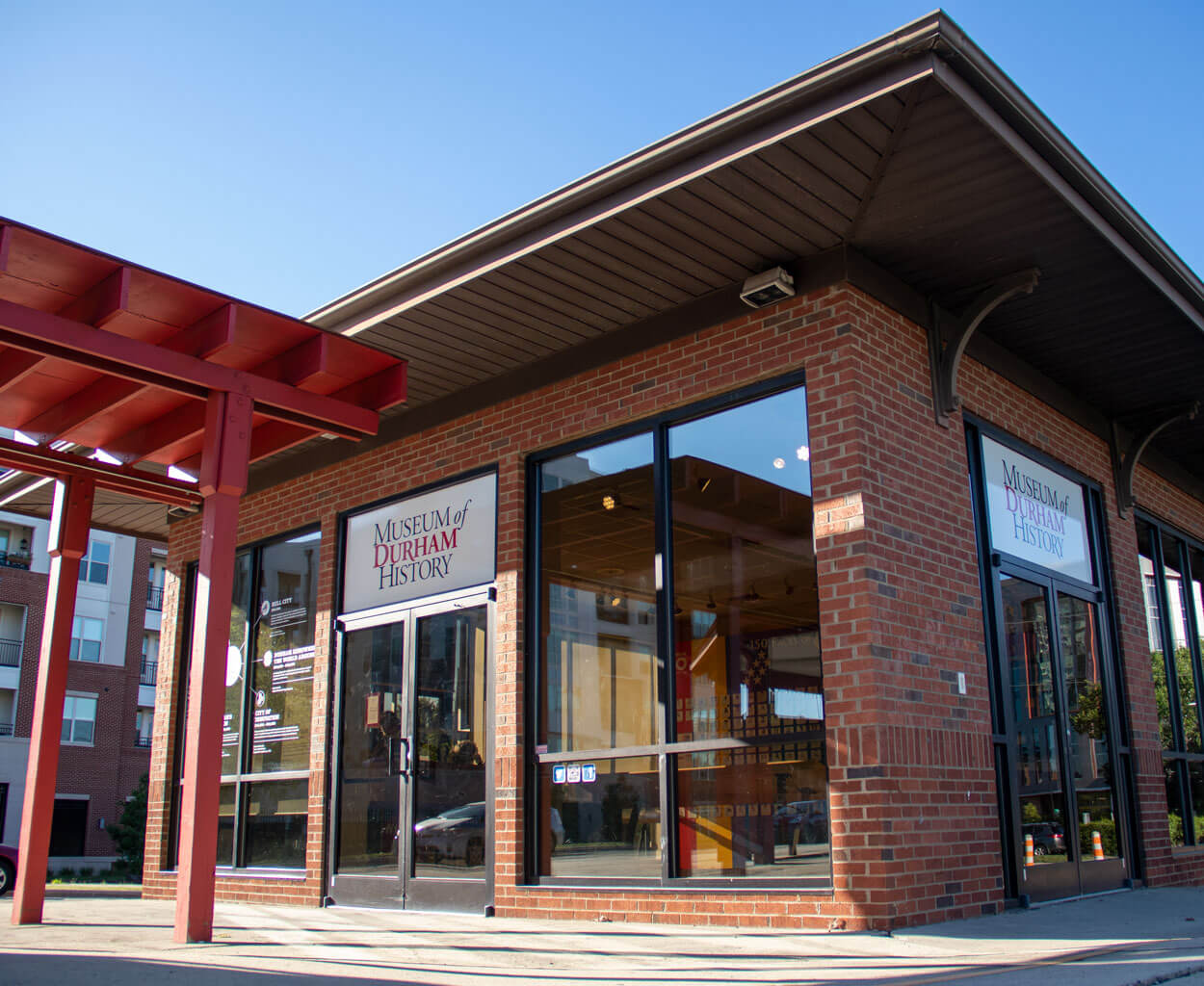 Learn all about Durham at the Museum of Durham History. photograph by Discover Durham

Get initiated at the Museum of Durham History

The Museum of Durham History, right on Main Street between downtown and the Brightleaf Square District, lets the city’s fascinating, complicated history unfold through the stories of those who remember it best. With regular events like live music, this museum is the best place to orient yourself in the Bull City. 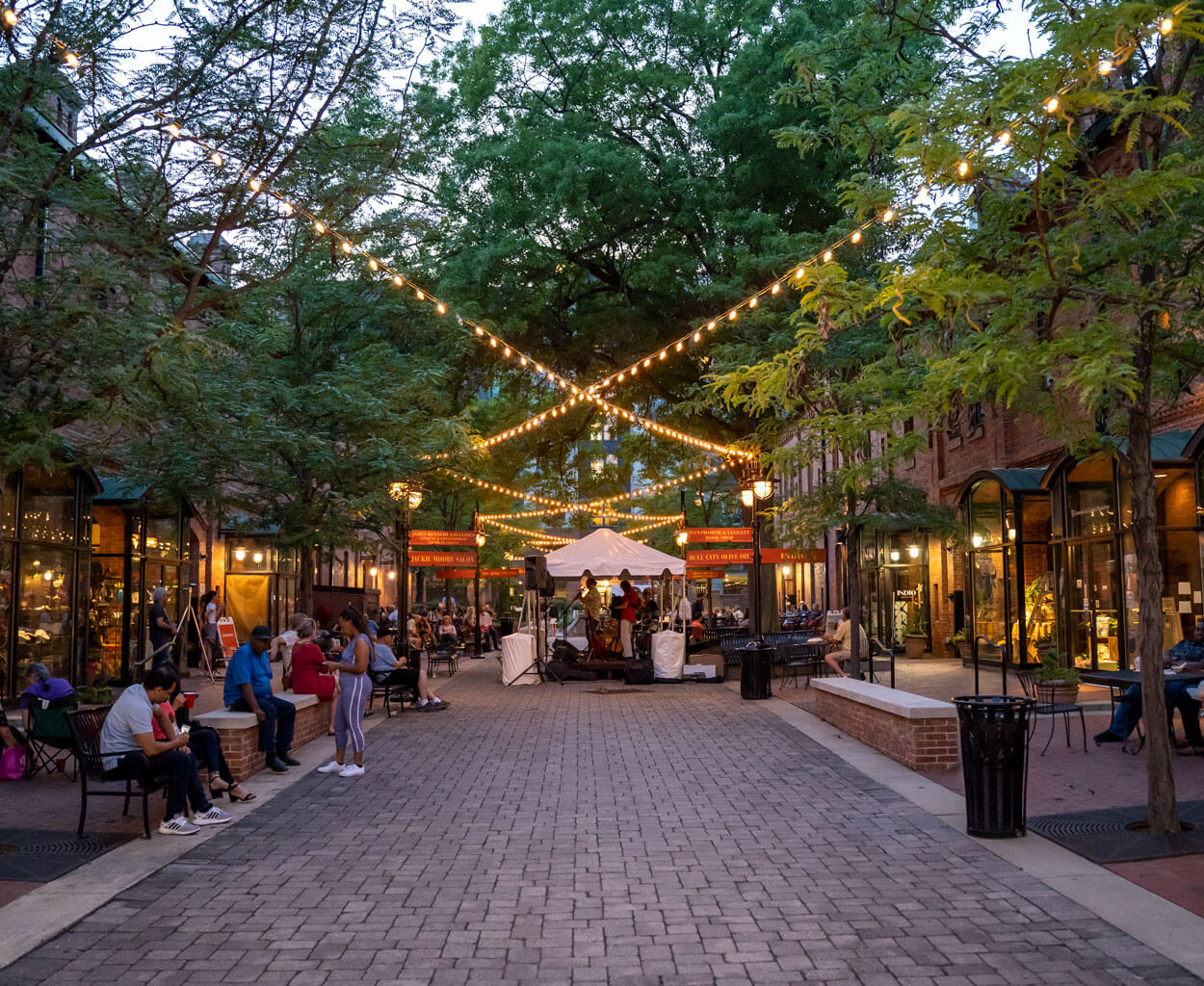 After getting acquainted with Durham’s history, see the past come to life: Explore the city’s renovated and repurposed tobacco warehouses at Brightleaf Square. Built in the early 1900s, the former Watts and Yuille warehouses still boast the enormous windows and rustic bricks and beams of the old days — but now, you’ll find delightful shops and restaurants inside.

Have a romantic dinner at Littler

At Littler restaurant downtown, expect a deliciously daring take on Southern food. Every part of this warm, cozy restaurant welcomes you and invites you to stay awhile. Strings of glowing lights dangle above wooden tables, and vinyl records crackle from behind the honey-colored bar. The menu changes with the seasons, but the food consistently stands out as sublime even in a city known for its top-notch cuisine. The restaurant is, as the name suggests, quite little, so be sure to make a reservation.

Grab a nightcap and get an eyeful at 21c Museum Hotel

The 21c Museum Hotel in downtown blends Durham’s storied past with its hip present. Walking into this luxury hotel, you’ll feel transported back in time, like you’re wandering into an old bank — and you are! Today, the old building’s bones remain: Admire the green-marbled foyer that stretches up to a silver-leaf ceiling, the huge windows, and the former vault — now a contemporary art gallery with a rotating cast of thought-provoking exhibitions. Grab a drink at the hotel’s chic bar and restaurant, Counting House, and explore the gallery, as well as the outstanding works scattered the space throughout the restaurant.

Rest your head (or float in a pool)

When it comes time to find a home away from home, stick with the past-meets-present theme: Float in a rooftop pool with a cocktail in hand at a historic former 1960s motel-turned-Unscripted Hotel; or retire to a former bank-turned-chic stay at The Durham or 21c hotels; an 18th-century plantation home like the Arrowhead Inn; or a tobacco VIP’s dream home like Morehead Manor Bed and Breakfast. Nearly any place you choose will offer an experience rich in history and luxury.

Here in Durham, you’ll find folks taking selfies in front of tobacco warehouses, traveling by foot or bike across a thriving downtown, and enjoying world-class live performances. Durham is home to immigrant-owned galleries, rainbow flag adornments, and so much more. 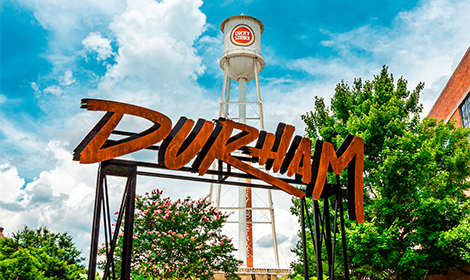 Toast the town at Toast

Grab a sandwich and soup from Toast. One of downtown’s flagship restaurants and a Durham mainstay, Toast is a paninoteca, which means that it specializes in tasty grilled sandwiches. Located in Durham’s Five Points area downtown, Toast has outdoor seats aplenty and is the perfect place to sit back and take in the busy Bull City at its best.

For more than 20 years, growers, crafters, confectioners, musicians, do-gooders, and nearly everyone else, too, have gathered at Durham Central Park for the farmers market. Get your people-watching fix (the park has a world-class skateboard park, where you can often spot boarders doing stomach-dropping stunts) and mosey along the market’s colorful rows. In addition to the usual fresh produce, you can also find local honey, fresh-cut flowers, local cheese, fresh pasta, and charming crafts. It’s a delicious place to window-shop — without the windows. The market is open each Saturday from 8 a.m. until noon and each Wednesday in the summer from 3 to 6 p.m.

Get to know the Central Park District, your new favorite neighborhood

Locals often hit up Durham Central Park for afternoon fun — think food truck rodeos, festivals, and live music — and just a short walk away from the park itself, you’ll find a tasty lunch spot: Geer Street Garden. This restaurant is located in an old Gulf station, and its fresh take on comfort food makes it a must-visit destination. (Don’t forget to save room for the banana pudding!) After you eat, spend some time wandering (and working off lunch), or head around the corner to Fullsteam Brewery for a craft beer made with fresh, local ingredients.

Admire the art at local universities

More than 13,000 works of art, ranging from ancient Mayan ceramics to abstract modern art, fill the galleries at the Nasher Museum of Art at Duke University. An afternoon at the Nasher promises to be one of color, wonder, and discovery. One exhibit you won’t want to miss: “David Levinthal: Baseball,” an installation of large-format Polaroid photographs that capture some of the most iconic moments in the history of baseball through Levinthal’s signature use of lifelike figurines. Babe Ruth’s called shot from game three of the 1932 World Series and Jackie Robinson stealing home in the 1955 World Series are among the moments rendered in the artist’s unique take on our national pastime. Admission is free for all thanks to a generous donation.

If you’re looking to enjoy more art, stop by the North Carolina Central University Art Museum — home to one of the most noted collections of works by African-American artists in the state. 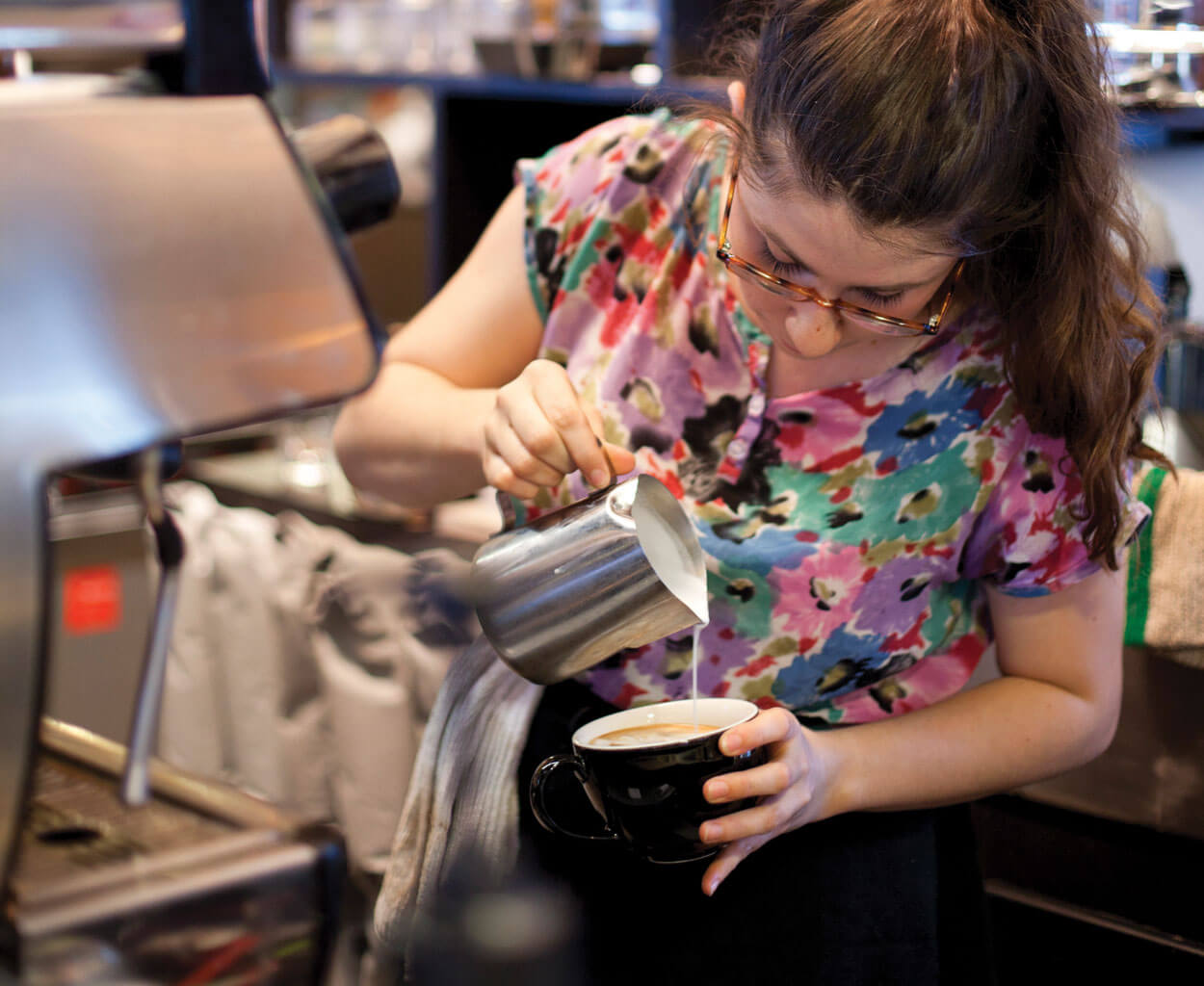 Treat yourself to a coffee and dessert at Cocoa Cinnamon. photograph by Jessie Gladdek

Get an afternoon boost at Cocoa Cinnamon

Let the afternoon linger with an after-lunch coffee — small-batch and perfectly roasted just for Cocoa Cinnamon — at the original Geer Street location of this beloved café, founded in 2013 by husband-and-wife team Leon and Areli Barrera de Grodski. The couple wanted to pay tribute to the key spices that have played major roles in the rise and fall of civilizations — in a delicious, authentic way. Try the La Frida, a latte made with mole syrup derived from Areli’s family recipe and garnished with rose petals, and take a seat on the pretty outdoor patio. For a dessert fix, try the specially crafted drinking chocolate. Yes, sippable, melty chocolate. You’re welcome. 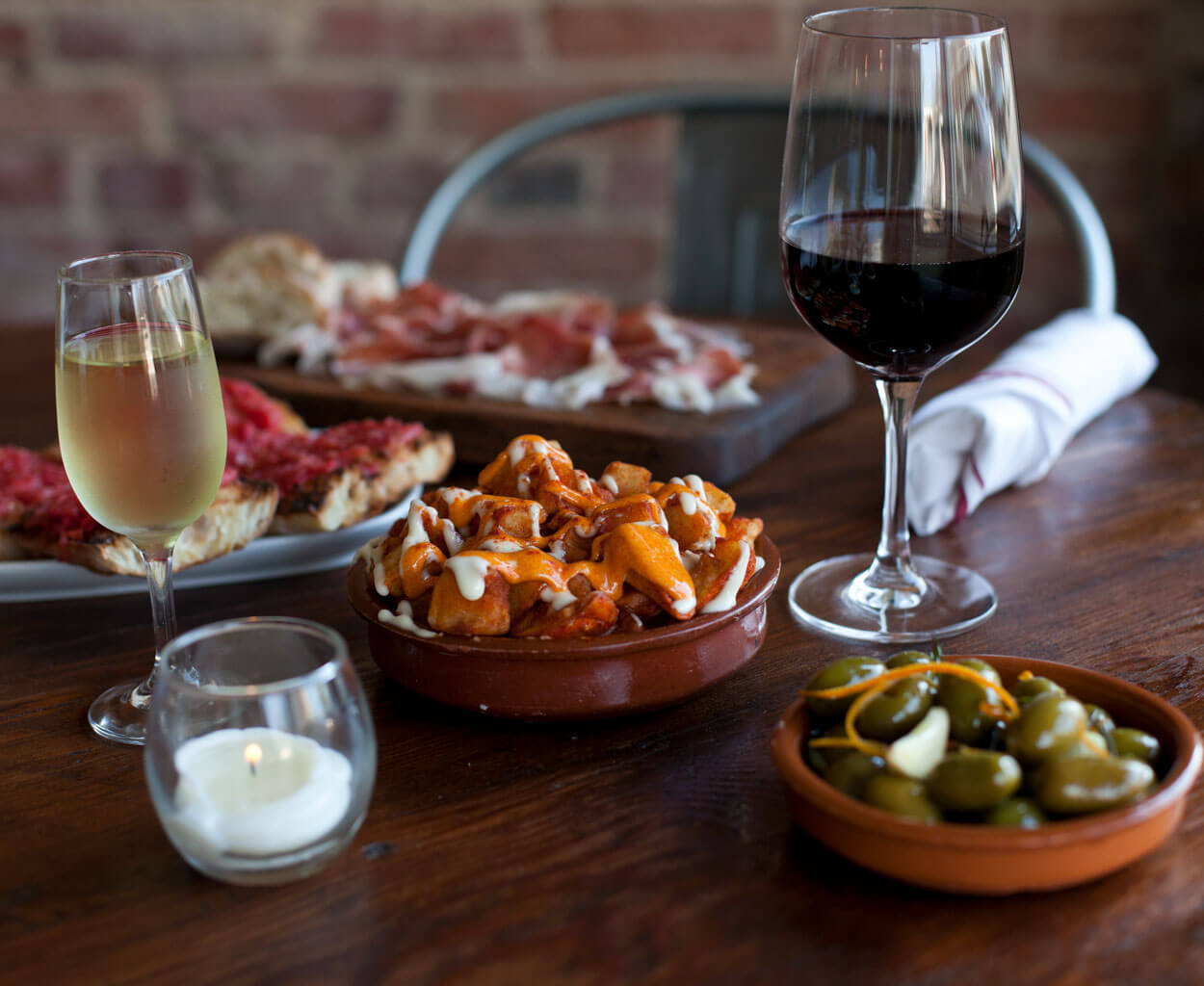 Experience a taste of Spain in Durham at Mateo. photograph by Jessie Gladdek

Dress up and delight in Spanish tapas at this upscale eatery located in a beautiful old brick building downtown. Chef Matt Kelly has been named one of the best chefs in the Southeast (four times) by the James Beard Foundation and is known for putting local North Carolina ingredients into foreign service, which means you’ll get a taste of the South and of Spain. There are dozens of delicious dishes to choose from, but the best part about tapas? You get to order more than one.

Walk among the flowers and wave at a Blue Devil

You don’t have to root for the Blue Devils to take a mid-morning stroll among the flowers in the 55-acre Sarah P. Duke Gardens. Then, explore beautiful Duke University. The splendid neo-Gothic Duke Chapel, with its 210-foot bell tower, is the centerpiece of campus, and offers an ecumenical Christian worship service open to everyone at 11 a.m. on Sundays. But even if you don’t go to church, try to swing by: A beautiful recital is played on the 50-bell carillon before and after the Sunday service, and every weekday at 5 p.m. — on Fridays, the recital is always the Duke alma mater, “Dear Old Duke.”

Have a bite at Beyú Caffè

Even before Durham’s revitalization was in full swing, Dorian Bolden wanted to honor the town he loved by creating a place for people to gather and celebrate their uniqueness, as well as all that they have in common — a place where you can “be you.” Today, his Beyú Caffè is the spot where locals gather for delicious cuisine and caffeine. And while the coffee bar will help you shake off sleep, the breakfast menu will really get your day started right: The Yard Bird sandwich layers fried chicken with avocado, egg whites, tomatoes, and pesto sauce inside an English muffin. And three French toast offerings — including sweet potato French toast served with crushed pecans and whiskey cream sauce — might make your breakfast decision even harder. Sit in one of the many window seats and watch Durhamites greet the day just like you.

One last sip before you leave …

Savor your last day in Durham at Rofhiwa Book Café, a Black-owned independent book store and coffee shop in East Durham that celebrates Black writers. On a hot summer day, order an iced chai latte or a cold brew — the coffee program sources from Three Keys Coffee in Texas as well as North Carolina-based Black and White Coffee Roasters — and peruse the recommended reads while you wait for your drink. Then settle in on one of the comfy couches with a good book. Now that’s a cool goodbye.