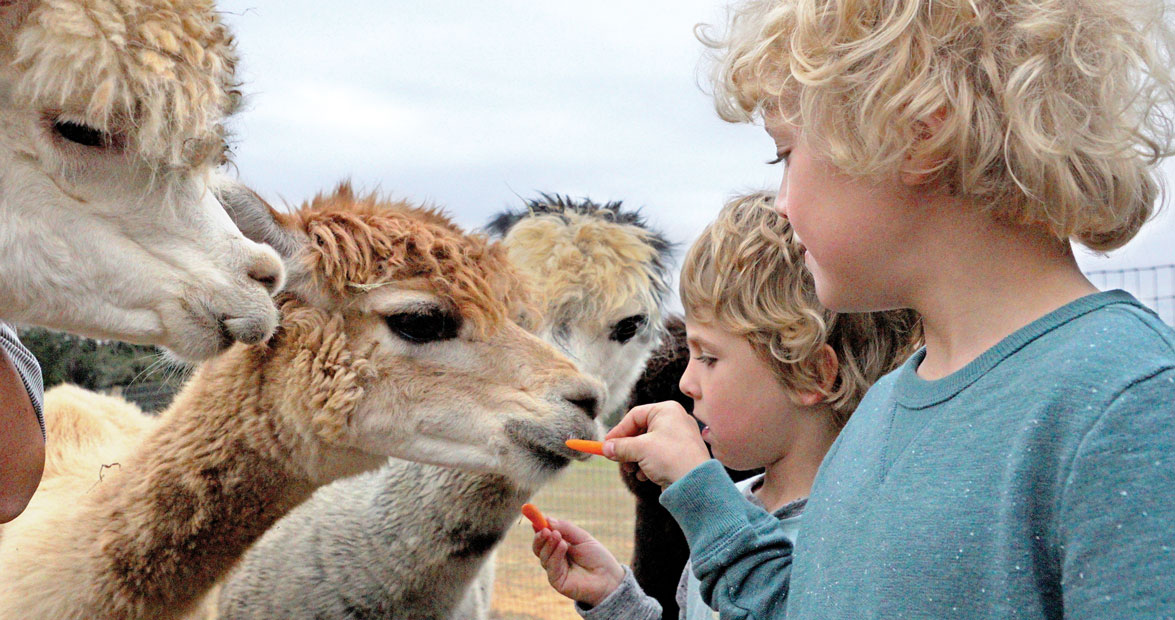 We’re standing in the south pasture of Denise and Spencer Yost’s Rita Dee Farms, an alpaca farm just outside Pfafftown. The land rolls away from us toward a hayfield, and a low, gray sky promises an April shower, or maybe even an April snow flurry. I’m thinking of a picture I keep on my desk: a 20-year-old snapshot of me grilling on the sidewalk in front of my grad school apartment, my old dog curled up nearby, wisteria blooming on the phone pole behind — though, like today, the weather’s cold enough to require long sleeves and a watch cap.

Something about this farm recalls the easy rhythm of those days, that weather, that dog. Or maybe it’s just that my two boys would never have warmed to anything like an alpaca without our new dog — so like that old dog — a dog with whom they’ve fallen in love. Spencer has let us through two or three pasture gates now, each time into a new clutch of alpacas, and each time, the boys have held their carrots out, giggling, mostly unafraid. That’s being around animals, I keep thinking. Living with animals. The thing you can’t teach.

There’s a game my wife and I play these days called “Dear 1997 Self.” We say it to each other after some particularly impossible-to-imagine sequence of events — like The Wee suddenly needing to measure everyone in the house, dog and stuffed animals included, marking heights on the wall with blue tape, while The Toad works on his new project, Top Bunk Comix, at the kitchen table. “Dear 1997 Self,” one of us will say, meaning: Hey, you. Kid in that long-ago picture. You won’t believe this, but about 20 years from now …

My boys have started trying to herd the alpacas, or chase them, anyway. I ask Denise and Spencer if I should reel them in. They’re probably fine, they tell me. Alpacas spit when they’re unhappy, and they might kick a little, but, Spencer says, “their feet are soft — padded like a dog’s — and they can’t do much damage.”

Dear 1997 Self: You will someday find yourself in a beautiful, serene pasture, hoping that a herd of alpacas doesn’t lose patience with your young boys and start kicking them gently. Actually, a good part of you will not be hoping that. A good part of you thinks: Best of luck, kiddos. Chase an animal larger than you are, no matter how docile, and you tend to get about what you deserve.

No boys get kicked in this story. Boys feed alpacas in this story, pat alpacas in this story, laugh uncontrollably at alpaca leavings in this story. But their behavior is, on the whole, remarkably good. Denise calls the alpacas therapy animals, and I believe her: In between poop jokes, the boys are calm. There’s something elemental about alpacas, perhaps. Beyond surface benefits like sustainability and flame-resistant fleece (Old Self, you’ll order fireproof socks for those boys from the farm store, because why not), just being out here with these animals brings stillness to a world that’s always hurtling forward.

We’re in with what Denise calls “her boys” now, young males only a year or two old. She shows me how soft their fleece is, and tells me it may not be like that in a few years: As some males age, their fur gets coarser. She pats one on his neck. “He’ll never be as good as he is right now,” she says, a kind of sorrow in her voice. Denise and Spencer and I all stare at each other, and then we laugh — partly, I think, to keep from crying.

My own soft boys are running along the wire fence at the western edge of the field. The alpacas get sheared the third week of April. They don’t look like themselves afterward, the Yosts say. They tell me other things, too, but I’m not sure what they’re saying — I just keep watching my boys laugh and run, these boys I could never have imagined. Maybe they’ll never stop, I think. Or maybe the alpacas will take them in. Dear 1997 Self: Someday, you’ll wish you could hold time, right here on this alpaca farm, forever.