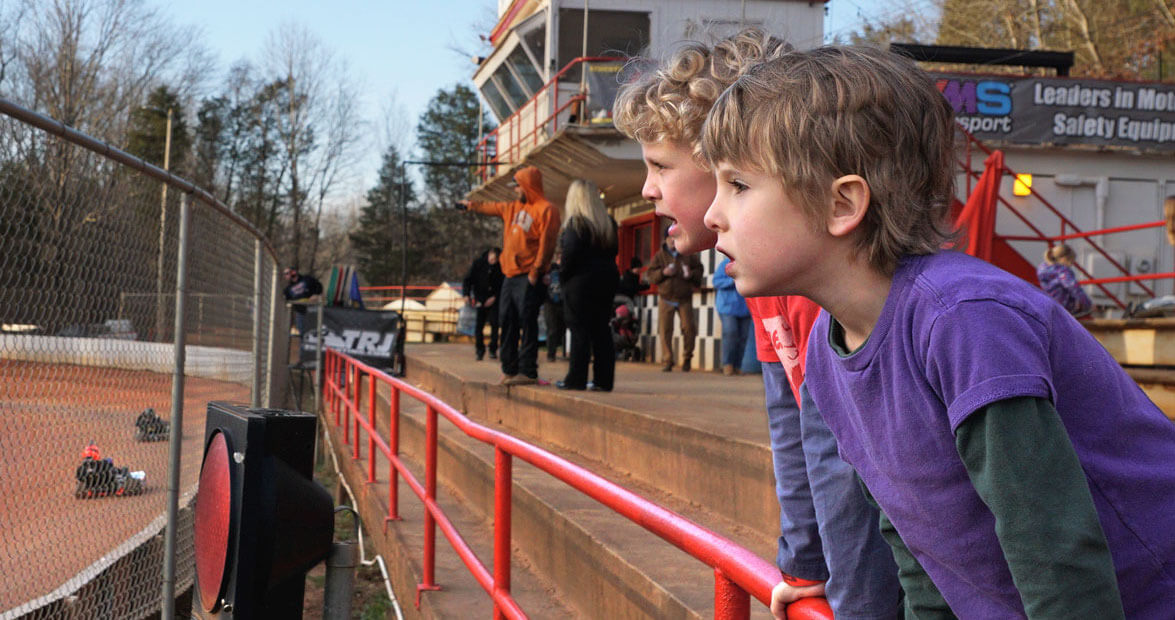 We’d never seen Nitro Flat Kart racing in person, and though we’d watched a few videos the night before, the effect was still startling. Imagine, please, either a fairly grown kid or a full-on adult sitting on the floor, knees drawn to his chest. Now, add a tiny metal-and-fiberglass frame slung a couple of inches off the ground on wheels the size of dinner plates, plus an outboard motor strapped on behind, and you’ll almost have it. Nitro Karts look like what would happen if you had an open Saturday afternoon, a few spare lawn mowers, two friends, and a bet. They look like what would happen if you gave either of my sons three wishes. The Toad came up over the first set of aluminum bleachers, looked out at the dirt track, eyes alight, and said, “Wait, are those things real? Is this the racing?”

We had their best friends in tow, two brothers the same age as my kids. The sound of absolute, unbridled joy? Four nearly feral boys hollering into the evening while race karts slide through turn three, drivers held into their seats by a combination of seat belts and pure chance.

Everything was perfect until the crash, which happened right below us. Two karts got tangled up heading down the front straightaway, and they hit the wall hard enough to make all four kids stand up and go quiet. I did the only thing I could think to do: I put my hand on each of their backs in turn, told them everything was going to be all right. That’s what the adults on the track did, too, untangling a couple of kids who were maybe 12 years old, and stacking the karts on flatbed trailers pulled by ATVs. “You’re fine, you’re fine,” I heard a track official tell a woozy driver who, the boys would later tell me, was bleeding from his elbow. (They saw him in line at the concession stand, and a hero was born.) And they were fine, all of them: The drivers walked off under their own power, and my rattled kids did their best to settle back in for a night of racing.

Afterward, though, the boys cheered almost exclusively for those drivers hanging back, out of the lead. “Let’s cheer for green!” The Toad said. “He’s making good decisions!” Later, The Wee led the pack in a chant: “More calm racing! More calm racing!” Most folks watch racing for the crashes. My kids and their friends, utterly wild in every other theater I could think of, cheered for the drivers most likely to set their blinkers before making left turn after left turn.

It was a strange and beautiful night: the beehive drone of the kart motors, the sodium glare of the track lights, the red dirt of the track itself, the foothills rising around us just west of Salisbury. The kids had their first solo concession stand run, could not believe their good fortune when I handed them cash and told them to stand in line, wait their turn. Newly cautious, they did not hazard the Walking Taco, a Millbridge Speedway specialty that consists of an open bag of Doritos smothered in taco meat, cheese, lettuce, and tomato. Instead, they brought back burgers and sodas and candy, screamed their lungs out for a girl driving a thoroughly tricked-out pink kart with pink shark teeth painted across the front. They sat in all three sets of bleachers. They stomped their feet. They pulled for the losers in every heat.

Another crash, this time in the far corner: A woman ran across the track, right through the racing. Oh, I thought right away. That’s his mom. It was, and this kid was OK, too, as were mine. Experts now, they reassured each other, offered up commentary about what might happen next. The busted kart got towed away; the racing went back to green; my kids and their friends cheered once more, as hard as they could, for the very last kart in line.