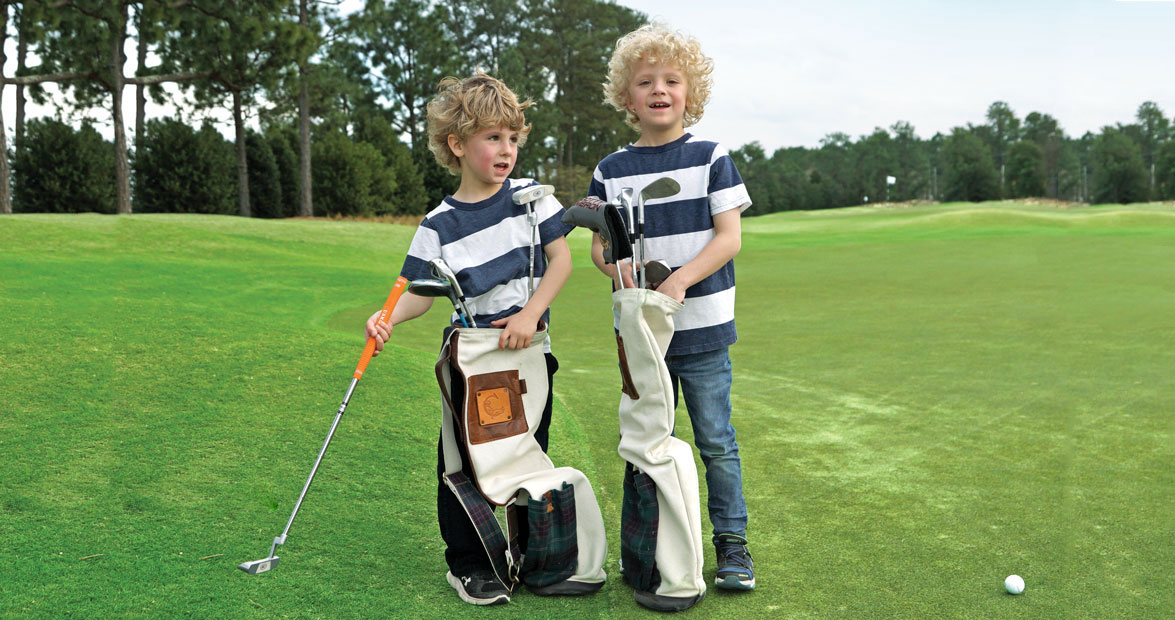 My 5-year-old, The Wee, has taken to watching golf on TV. On purpose. As in, he will climb into my lap, snuggle down, and pay actual attention for an actual period of time. It’s startling, and delightful, and it led to him wanting to know: Could we do that, too? Was there somewhere we could use real golf bats?

Oh, buddy, I said. Have I got the place for you.

The red-roofed clubhouse at Pinehurst, Donald Ross’s Sandhills masterpiece, rambles out toward the world-renowned No. 2, sure, but it also faces something a little more kid-friendly: a huge, 18-hole putting green named Thistle Dhu (This’ll Do), and The Cradle, the brand-new nine-hole, par-3 course meant to make the game seem a little less daunting than it might back over the rise. This is how my boys came to be standing on a tee box, holding kid-size drivers — The Wee calling his a “basher,” and The Toad insisting that it was a “whacker” — with me hollering at them to stop, hold on; golf is a game of rules. One of those rules? We need to hit the ball one at a time.

I don’t think I learned much about parenting at The Home of Golf. No crystalline revelations, no heart swelling with pride when first one child and then the other managed to chip the ball into the air and onto the green. Instead, even though chasing two boys around a golf course makes herding cats look like a promising career path, I just had fun. We caught a cool, breezy evening, and the light getting all long in the bunkers and the pines scenting the air put me at ease. So when The Wee hit a driver off the fairway on the fourth hole with me standing 30 yards ahead of him, his ball whistling by my ear, promising concussion, stitches, what have you — well, it just wasn’t that big a deal. I jogged back his way to tell him that another good rule is to make sure nobody’s in front of you when you take your turn.

Up near the green, his brother swung a seven-iron, peeling a serious chunk of Bermuda out of the manicured ground. I hustled back that way to caddie for him and replace his divot.

There’s a beverage cart at the top of the hill by the eighth hole, and the boys took a break with a couple of lemonades while we watched a father and his teenage son crack majestic, soaring shots from a raised tee to a green maybe 90 yards below. “Wow,” The Wee whispered. (I’d taught them that being quiet was good manners; I’d taught them the golf clap.) “Can I do that someday?”

“Maybe,” I told him. He’d seen me hit off the tee — the “golf peg” — back on the first, and while my shot was also soaring and majestic, it hit a tree that could only generously be described as close to where I was aiming. “Golf is hard.”

“No, it’s not,” he said, finishing his drink and grabbing his putter. “Follow me. I’ll show you.”

I carried their clubs back across to Thistle Dhu, and I watched while they lined up putts on their knees, while they failed to gauge the speed of the green, while they played through other groups with reckless, joyous abandon. I dropped one in myself from about 15 feet, and it felt like a miracle — because it was. “Do it again,” The Toad said, retrieving my ball for me. “Oh, I can’t,” I told him, and I didn’t hit anything from even close to that distance for the rest of the evening. It didn’t much matter, though.

The boys putted until the thrill finally began to wear off, and then they had chocolate milk back up at the clubhouse while I sipped an ice-cold beer, and we kept our voices down so folks finishing on the turtlebacked 18th green at Pinehurst No. 2 could bogey their way home in peace. Can we get our own real golf bats? they wanted to know, while we watched a woman chip to within maybe 18 inches. We clapped quietly for her. Maybe so, I told them, thinking of calamity, but also of more evenings like this. Maybe so.