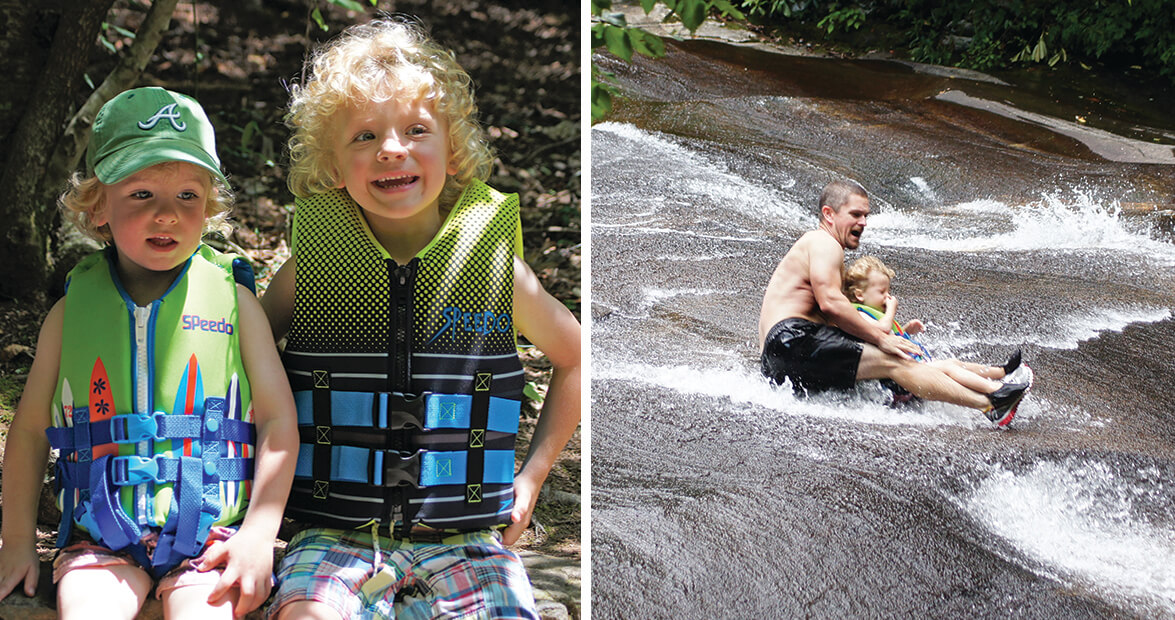 Lies quickly spread in line: I hear the water is minus-2 degrees. I hear there are snakes. Anything seems possible. Everyone under a certain age is seeking reassurance on the way up: You’ll hold my hand, right? We can go together? Everybody over that certain age is pretending that these aren’t their exact same questions, too. And everybody who’s already gone once or twice or 10 times? Those folks hold quiet. There’s a code.

I haven’t been to Sliding Rock in 30 years — not since I spent summers down the road at Camp Kanuga, one star in a constellation of summer camps around Hendersonville and Brevard. But the muscle memory is the same: the beat-up sneakers on your feet, the smell of the mud, the long line, the roar of the water. I think the lifeguards are new; in my memory, you were on your own. All the same, we get to the top of the falls, sit down in the water, and even before we slide, I think: Was it always this cold?

“Falls” is maybe the wrong word. Better to imagine a kitchen table — no, a whole kitchen floor, or several kitchen floors, tilted at a 20- or 30-degree angle and made of rock. Better still: Just imagine the rock, a 60-foot tongue of boulder channeling 11,000 gallons of icy water per minute into an eight-foot-deep pool at the bottom. Then imagine letting go.

It’s faster than I remember. By a good deal.

I’ve just looked up at my wife from here at the desk where I’m writing this and said, “I’m afraid you’re going to appear in this piece.”

The first time we hit the bottom, The Toad clings to my back like a baby monkey, and after we collect his brother and his mom, the four of us swim out. The Wee, 4 at the time, is crying. The Toad is 6, and is trying very hard not to cry. “That was so scary,” he says. “I never want to do that again.” My wife, who has lost her sunglasses and, yes, one shoe, says, “Don’t worry. We won’t.”

What she tells me that night, back home: She’s not a huge fan of (a) being extremely cold and (b) not knowing exactly what’s going to happen. As such, Sliding Rock is not, perhaps, her safe place. “I should have known that,” I say. “It’s all right,” she says. “The boys had a really good time.”

And they did. Not long after announcing he’d never go again, The Toad hazards that he would like to go again. Two times watching him come down is enough to convince The Wee to have another go himself, and we spend the better part of the next hour with two zillion (were there this many people here when I was a kid?) other carefree lunatics sliding again and again and again.

Nobody here’s not happy. Yes, there are the occasional sibling dustups (Toad and Wee included), but in essence, everybody’s on a giant rock slide in a mountain river. Even those folks who’d rather just watch are happy. On the way out, clumps of kids postgame their rides: which was the best, who did the craziest stunt, who slid the most times. I’m happy and sunstruck; my boys are already falling asleep. There is no sleep like the sleep following Sliding Rock.

In the parking lot: happy, soaked, bruised, 13-year-old campers. I watch them load onto the bus, and I’m washed into the thrum of the falls behind me, the people coming and going, my younger self on the bus, my own kids in my own car. Oh, you campers. Thirty years on, this place will still be important. You learned something here. You were briefly free. Hey — you might even bring your wife and kids someday. She will lose her glasses, and the kids might cry, but they’re your family, and they’ll stick with you anyway.