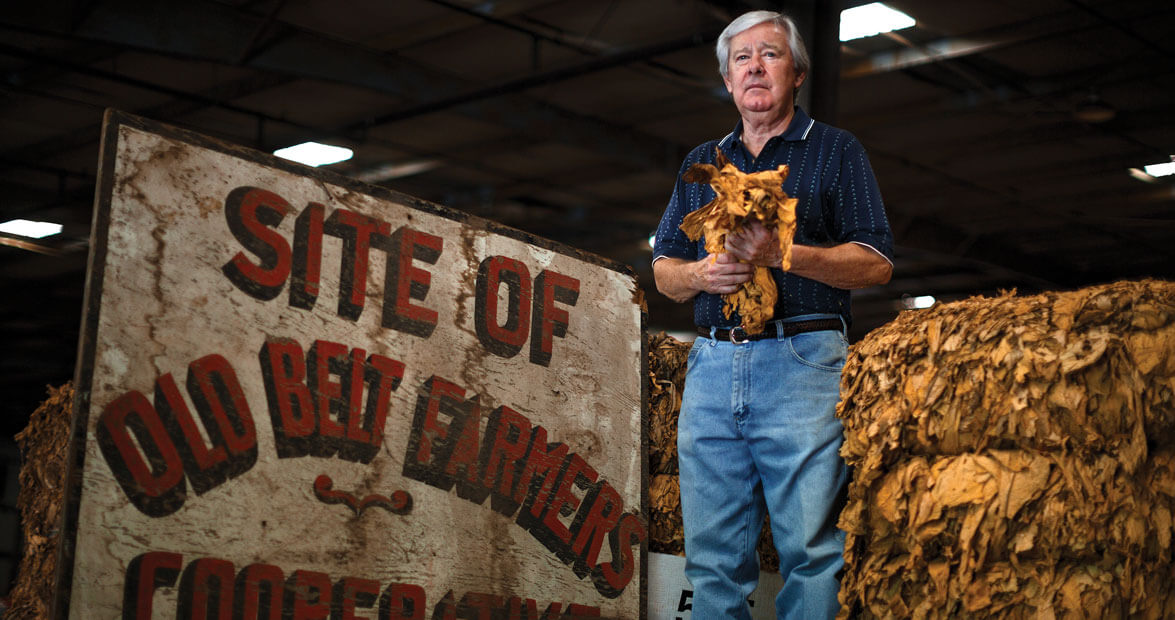 Auctioneer Chuck Jordan is standing in the Old Belt Farmers warehouse in Rural Hall, surveying rows of yellowy-green tobacco piles that stretch across an area the size of a football field. It’s just before 10 a.m., and the sweet smell of tobacco hangs in the air. Jordan, a silver-haired 71-year-old, never tires of the aroma.

“Back in the old days, you could smell tobacco all over this town,” he says. “It was the smell of money.”

Jordan is at the warehouse to lead a tobacco auction, an annual late-summer ritual. The auction used to be a big event, where politicians gave speeches, bands played, and tourists watched as the auctioneer sold the golden leaves. But today, it’s just growers and buyers. No fanfare.

Tobacco — called “’bacco” by everyone at the auction — has been under fire for decades as government regulation and e-cigarettes have cut into the market. Moreover, farmers are forgoing the auction system entirely, and contracting directly with cigarette manufacturers for their crop. All of which makes Jordan one of the last of a dying breed of auctioneers trained to sell the state’s signature crop.

“There’re only a few of them left, and all of them are old,” says Dennis White, who operates the warehouse in Rural Hall. “No one’s taking this trade up.”

Before the sale starts, the buyers walk the rows of tobacco. They pull out handfuls of leaves, looking at the quality. Today’s sale is “bottom stock,” or leaves from the bottom of the plant. Most of it is decent quality, but some of the piles — which weigh between 600 and 700 pounds — look brown and weathered. Jordan knows that it’s going to be tough to get the buyers to pay high prices for this load, but that’s his job. He works on commission, so the higher the price at which the tobacco sells, the more money he makes.

“It’s really an art,” he says. “Like a symphony when everything is going smoothly. You can almost dance to the rhythm.” He chuckles. “I can’t, because I have two left feet.”

Jordan, dressed in a polo shirt and jeans, leans over the first pile. White starts the auction by calling out a price. Five cluster around. “Who’ll give me eighty-one? Eighty-one, eighty-one, eighty, done,” Jordan says, his cadence song-like.

He calls out the buyer’s company and moves to the next pile in one seamless motion. A clerk carrying a plastic tablet scrawls the price and buyer on a tan ticket and tosses it on top of the pile.

Jordan began selling tobacco when he was 25. He got his start auctioning cars on Tuesdays while he was enrolled at High Point College (now High Point University). Selling cars was just practice. He wanted to sell the golden leaf.

“Tobacco auctioneers were always the king of the auctioneers,” he says.

In 1968, Jordan got his chance to sell tobacco as a relief auctioneer. At his first auction, he was supposed to only sell a couple of rows, but wound up selling 90 percent of the tobacco.

There’s pageantry to the scene as Jordan guides the buyers up and down the rows. The auction is a flurry of eyebrow twitches, hand taps, and fist pumps, all signaling bids. Jordan tracks each one, picking up even the subtlest signal.

In a few minutes, the ticket marker is three piles behind as Jordan kicks into high gear. He’s in a trance as he moves up the row, selling each pile in rapid succession. As Jordan suggested, the auction floats along like a symphony, with the buyers as the orchestra, and Jordan at the center as the conductor.

“I’ve got to keep the buyers interested,” Jordan says. “If I sound bored, they go to sleep. This is a challenge every day. Every row is a challenge.”

Being an auctioneer isn’t for the meek. The job is part showman, part referee. The auctioneer has to know the product, the buyers, and the auction rules, all while keeping the sale moving. Jim Venable, a tobacco buyer since 1985, says the success of the sale rests on the auctioneer’s skill.

“A good one kind of floats down the row,” says Venable. “A bad one makes you feel like you’ve been beat down the row. Chuck is a good one.”

In 38 minutes, Jordan sells more than 300,000 pounds of tobacco. Afterward, he’s not even winded. Standing near the last row, he tells a story about a young guy years ago who wanted to sell during an auction in Georgia. So, toward the end of the auction, Jordan let the fellow start a row. He sold only two piles before collapsing. “When do you breathe?” he gasped.

“At the end of the row,” Jordan told the man, and laughs at the memory. “You got to learn how to breathe on your own time.”

No young auctioneers are coming behind Jordan. “Tobacco was king, but it isn’t king anymore. There’s no need for new blood,” he says. “We’re dinosaurs. I hope I do it for the next 50 years, but I don’t think I will.” Chuck Jordan is one of the last masters of a lost art, and with each auction, the skill passes into history.