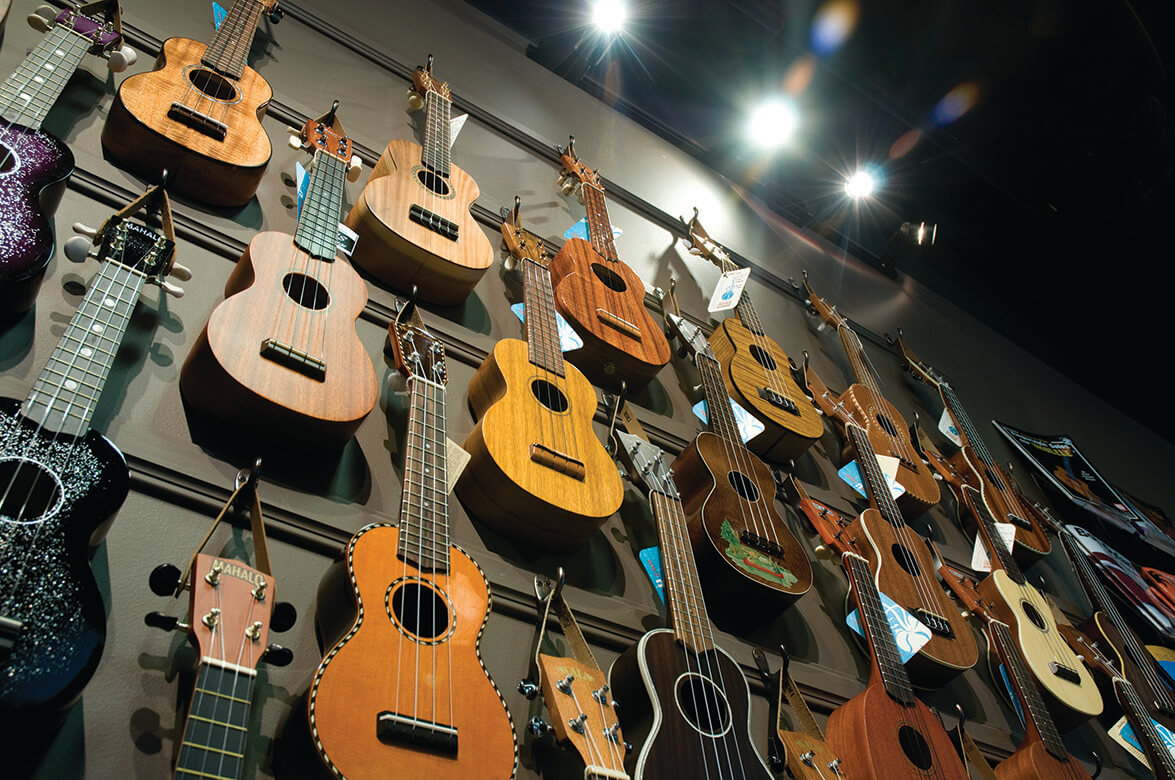 It is 7:45 in the morning, and Kent Knorr is strumming his brown Kamaka ukulele backstage at the large Port City Community Church in Wilmington.

Knorr is practicing “Somewhere Over the Rainbow,” the song he’ll play to open today’s Sunday services.

His face is serene, and he hums the lyrics to the song as his fingers dance across the instrument. In his big hands, the ukulele looks small, like a toy. But its sound is huge.

Dressed in a dark shirt, khakis, and flip-flops, Knorr walks onto the stage and settles himself on a stool. He looks out into the dark, crowded church. Almost every seat is full. By the end of the day, he’ll have played at four services to more than 5,000 people. And after each show, he’ll get questions about an instrument that looks like a little guitar from Hawaii that he never leaves home without.

It’s three years ago, and Knorr is eating crab cakes. He’s a real estate partner and coupon-book business owner, but tonight he’s gone out to dinner with his wife for another session of “wouldn’t it be cool if …”

They’d had these sessions regularly through the years. Knorr, who graduated from East Carolina University with a business degree, had always been a dreamer searching for his passions. He settled in Wilmington after college because he liked the laid-back, beach vibe of eastern North Carolina.

His first job was in advertising, selling ads for a tourist magazine. After three years, however, Knorr wanted to work for himself. He started a coupon book with his wife, a graphic designer.

“It was a little book with bright colors, great coupons, and a catchy logo,” Knorr says.

“But I was realizing that advertising wasn’t my true passion.”

Meanwhile, at night, he offered lessons, teaching ukulele and banjo to anyone interested in picking up the instruments. But when he became the partner in a real estate firm, he found that he had less time to teach or even play. He occasionally got a few minutes to strum the ukulele on the porch.

Then, over those crab cakes, he and his wife threw it out there: “What if we opened a ukulele academy?”

The conversation started off as a joke, but by the time their dirty plates were cleared, Knorr was intent on starting the academy.

Knorr sold his share in the real estate company, and a company in Carolina Beach bought his coupon book. Naysayers came from every corner. They laughed when he told them his idea. Some told him it wouldn’t work.

“It had never been done outside Hawaii or California,” Knorr says. “But the pluses were too big to resist: working for myself and finally doing what I love — music.”

When Knorr leased the space for the academy, he had to get insurance. He called his agent to get a policy and told her he was starting a music school. While his agent did the paperwork, she asked Knorr about the school.

“What kind of instruments are you teaching?” she asked.

And she just started laughing.

It’s 1987, and Knorr is 14 years old when he inherits his grandfather’s ukulele. In the years that follow, Knorr picks up skills on the guitar and banjo, and starts jobs in advertising and real estate. But always, he goes back to the ukulele.

Now, Knorr has played his grandfather’s ukulele so much that not only did he wear a groove in the neck, but he had to repair cracks in the body.

The ukulele, Knorr says, is an instrument that anyone can pick up and enjoy. Easy to play. Easy to learn. And versatile. In Knorr’s hands, it becomes an acoustic jukebox. He tends to play more than talk and shifts between classical music (he played Bach and Pachelbel’s “Canon in D major”) to jazz and even a few rock tunes.

Overlooked as a little four-string guitar, the ukulele is actually a plucked lute with a rich history. Created in Hawaii in the 19th century, it is based on a small guitar brought to the islands by Portuguese immigrants. Made famous by Hawaiian music, the word “ukulele” translates to “jumping flea” because of the way a musician’s fingers dance across the fret board.

The instrument caught on in the United States during the 1915 Panama-Pacific International Exposition in San Francisco and again in the late ’40s when World War II veterans returned from the Pacific. Then in the late 1960s, Tiny Tim came along with his plastic ukulele and his hit song “Tiptoe Through the Tulips.”

That almost killed the instrument.

“Tiny Tim did for the ukulele what Deliverance did for the banjo,” Knorr says. “For a while, it was thought of as a toy. As I was learning, I would run into a lot of people that thought it was ridiculous.”

It’s any weeknight, and Knorr is teaching a class.

Knorr has taught more than 300 people how to play the ukulele. His students range from toddlers getting their first taste of music to aging baby boomers who have returned to their dreams of learning how to play an instrument.

As class begins, it’s clear the days of selling ads are a distant memory. The store and ukulele academy look like a living room. And he treats his students with the same level of comfort. He is a friend to all of them.

“People bake cakes, send me postcards when they travel, and bring me back souvenirs from Hawaii trips,” he says. “People care about this place.”

One recent night, a woman came in for a Hawaiian-style lesson. She entered the academy sour from a bad day at work. When she left an hour later, she had forgotten the day, a changed person, peaceful and stress-free after just a little time strumming an instrument Knorr never leaves home without.