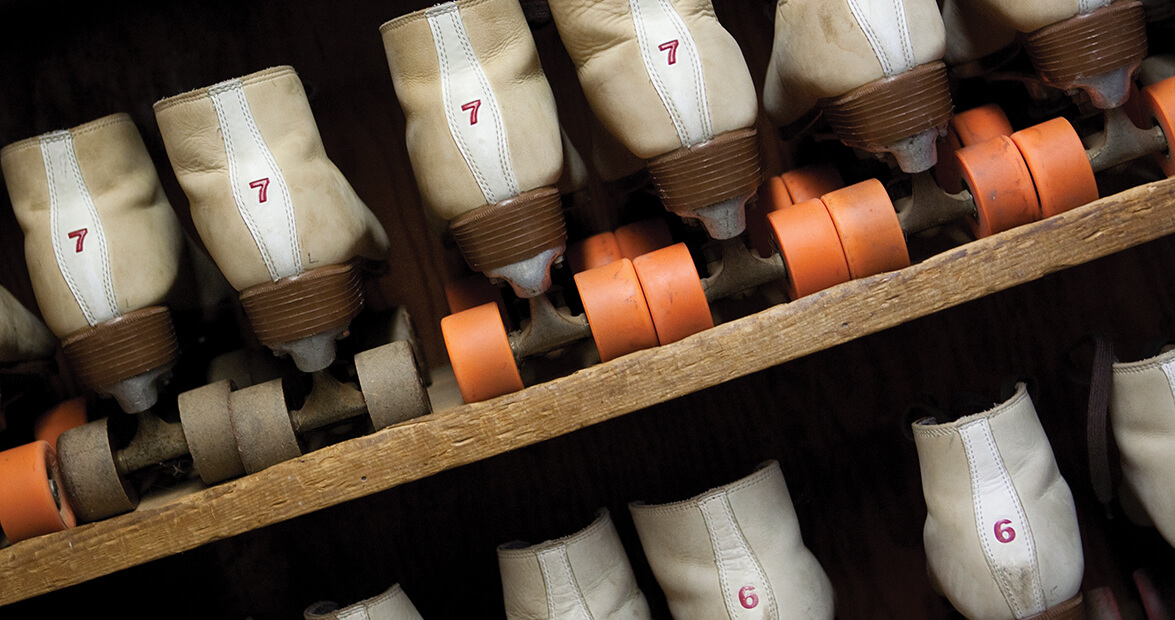 The first customers at Topsail Beach Skating Rink walk through the door at 7 p.m. Behind the counter, Dan Arnold, wearing his black, Riedell speed skates, answers questions and takes money.

“I can drop them off now and pick them up at 10?” the customer asks Arnold, nodding his head toward two kids.

The youngest boy, wiry and still growing into his body, points to the pile of 45-r.p.m. records on the counter. He complains about the current state of music, his taste older than his 15 years. He doesn’t like rap music. He wants Queen, maybe some Michael Jackson.

The skating rink is like something out of a time capsule. From the outside, the white, cinderblock building doesn’t look like much. Inside, the wooden floor is marked with scratches from years of skating. The ceiling is high, and you can see insulation tucked above the chicken wire. The office reveals rows of dusty skates and rusted suitcases filled with rollerblades kept here by once-regular customers, left behind by necessity, college, life beyond Topsail.

The metal railings for the beginners and the cautious are held together by Duct tape. The bottom of the stopping pole — the strong, wooden beam that anchors the place from floor to ceiling — curves in at the bottom, only about two inches of wood remaining, worn thin by years of skaters jamming their boots into it, wrapping their right arm over the beam and flying around it in slow circles.

In the daylight hours, the place is silent. But on nights like this one, you feel the beat of the music and hear the wheels — so many wheels strapped to feet, flying across that old wooden floor.

Doris Jenkins first learned to skate on her front porch in Folkstone when she was a young girl. Back then, you clamped on the roller skates to your shoes — there was no boot — and held the two together with a small key. You lost that key, you skated forever.

It seems like Doris has been skating that long. She and her husband, Joseph, first built the Topsail Skating Rink in 1964. Ten years earlier, he started running the only rink in town, located in the old Marine recreation building. But the owners sold the building, and Joseph and Doris bought their lot in 1963 and built their rink that year.

The couple imported the wooden floors from Japan. They bought their skates from the Chicago Roller Skate Company — back then, the only company. They hung black, cardboard cut-outs of women and men in skates on the walls. They bought a record player and installed speakers so skaters could hear the music thumping as they twirled round and round. And the last installment — a radiant, silver disco ball — guided the young boys and girls to the darkened corners at night to practice their kissing skills.

In those first years, Doris worked at the post office as a clerk and waited tables at a restaurant to help pay off their $14,000 loan. Joseph ran a construction business. At 7 p.m., she and Joseph walked from their house, located next to the rink, to open the doors. Sometimes, in the early part of the evening, they skated together holding hands, her white boots and red wheels flashing in the disco ball’s light next to his green velvet speed skates.

Joseph bought her the size 7 Riedell boots and red wheels when they opened the rink — $300 and worth every penny. “Once you get used to a wheel, it’s hard to go to a different pair,” Doris says.

Would she ever skate in another boot?

“No ma’am,” she says, her curly, cinnamon-colored hair shaking as she nods her head. “These will last me the rest of my life.”

In 1981, her nephew Dan Arnold persuaded Doris to change up the music. She played classical music usually, nothing much with words, except for “Brand New Key” by Melanie. A customer had brought her the record, telling Doris it was the perfect song for the place.

Doris gave Arnold a few dollars every Saturday to hunt for 45s at garage sales. He returned with armloads of Michael Jackson, Elvis, the Bee Gees, Elton John, the Rolling Stones, and Neil Diamond. Those few hundred records he collected over the years remain in stacks on the office countertop. Each night, a dusty nickel holds the record player’s arm down to keep those old records from skipping.

And as the years ticked by, the white, cinder-block building became the evening hot spot for local kids and a symbol of summer for Topsail beachgoers. The neighborhood boys and girls helped Doris behind the counter and skated for free in exchange. The helpers became a blur of faces and names to Doris. But they knew they could always come back, their skates still lining the shelves in those rusted boxes.

‘Freedom in the rink’

Arnold doesn’t hunt for records at garage sales any longer. He’s 44 with a family of his own in Jacksonville, and 9-year-old twin stepdaughters who would rather skate than walk anywhere. Many nights, though, he still drives to Topsail to help Doris run the rink.

“Lord, yes, I still skate,” he says, slipping on his black Riedells.

Tonight, Arnold is in charge, so he plugs his iPad into the amplifier and tunes the Internet radio station to ’60s music. “Like my Daddy said, it’s easier to get forgiveness than it is permission,” he says. “Aunt Doris would kill me if she knew I did this.”

Arnold grew up helping Doris find the records he knows she would be angry he isn’t using. Every summer, he and his cousins helped Joseph tar roofs and build decks. The boys hammered and nailed from 8 a.m. to 5 p.m., ate dinner, then found their freedom in the rink from 7 p.m. to 10 p.m. each night. “If a time machine existed, I’d relive the ’80s over and over again,” he says. “This helps a bit.”

On this evening, he smiles as he watches teenage boys race down the floor. He can still outskate them. Blake Alphin, a 14-year-old whose feet outgrow his skates every year, walks through the door. He’s Doris’s “buddy,” as she calls him. He sells his friends crackers and gum, takes their fives and ones, and skates for free.

And then they race to the center of the rink, their skates a rolling blur as they barrel down the old wooden floor, the white-haired man racing the pink-cheeked boy.

Doris is 75 now. Sometimes her back hurts. Sometimes she gets dizzy. Sometimes, she stays inside her home next door and rests while the kids skate their hearts out 100 feet away.

But on nights she feels well, Doris opens the skating rink at 7 p.m. She plays 45s on the player that drops the records, and skaters try to discern the songs through the two crackling speakers on either side of the rink. She sells chips and crackers for 75 cents a pack and sodas for $1. She slides money inside her rusted cash register, pressing the $5 button and listening for the ding that still rings out.

And at precisely 9:30 p.m., she slips on her white Riedell boots with her eight Canadian red wheels and Chicago plates and drops a whistle over her head. She grabs the wooden dice her husband carved and painted 50 years ago, and puts the needle on “Brand New Key.”

And as she rolls fluidly into the center of the rink, looking at the fresh, flushed faces of youth, she explains the rules of the game, all the while skating in circles, her scuffed boots holding her steady.