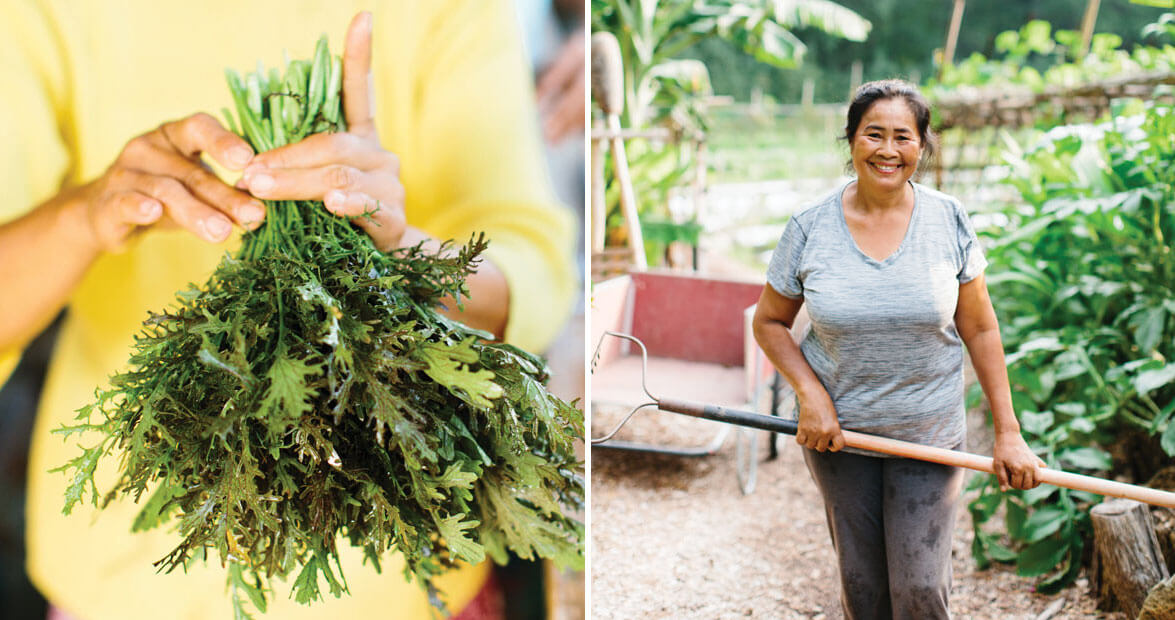 Inside a white tent at the Carrboro Farmers Market, Talar Hso, 17, and her friends Mu Eh Kee and Sofia Thein prepare to cook heaps of freshly picked okra over a portable stove. Hso peers out and quickly scoots back to the table. “I think we can start,” she says, and the girls begin to chop garlic and okra. “Are we going to do two batches?” Thein asks, arranging the okra rounds into a pile.

Hso nods. “That’s so it isn’t slimy,” she says, stirring hot oil with a wooden spatula. “That’s what we are avoiding. Maybe if you had read the recipe …”

Thein looks up. “I did read the recipe,” she says pointedly. The girls, who are students at local high schools, eye each other, and then burst out laughing. They’ve been working markets together all year, and they share that ineffable bond of teenagers left, mostly, to their own devices. “We have this friend connection,” Hso says. “Even on our messaging apps, we talk like that.”

The oil is crackling hot, and Kee tips in some garlic. Soon, the aroma of frying garlic, ginger, and chili pepper escapes the tent. A woman from the nearby voter registration booth follows her nose inside. “Gosh, it smells wonderful!” she says. The girls give her a sample of their Thai-spiced, stir-fried okra, the edges blackened and flecked with red chili pepper. Unlike the stalls offering the usual samples of pimento cheese or homemade jerky, here, the goal isn’t so much to lure as to reassure — something a little foreign, yes, but also familiar. It’s a critical message to convey, because among the girls’ baskets of typical North Carolina produce are many vegetables that shoppers might not recognize nywort leaves, and ridge gourds — all grown nearby at Transplanting Traditions. The nonprofit community farm is run partly by and entirely for refugees from Burma (called Myanmar by its ruling government since 1989) and their families. 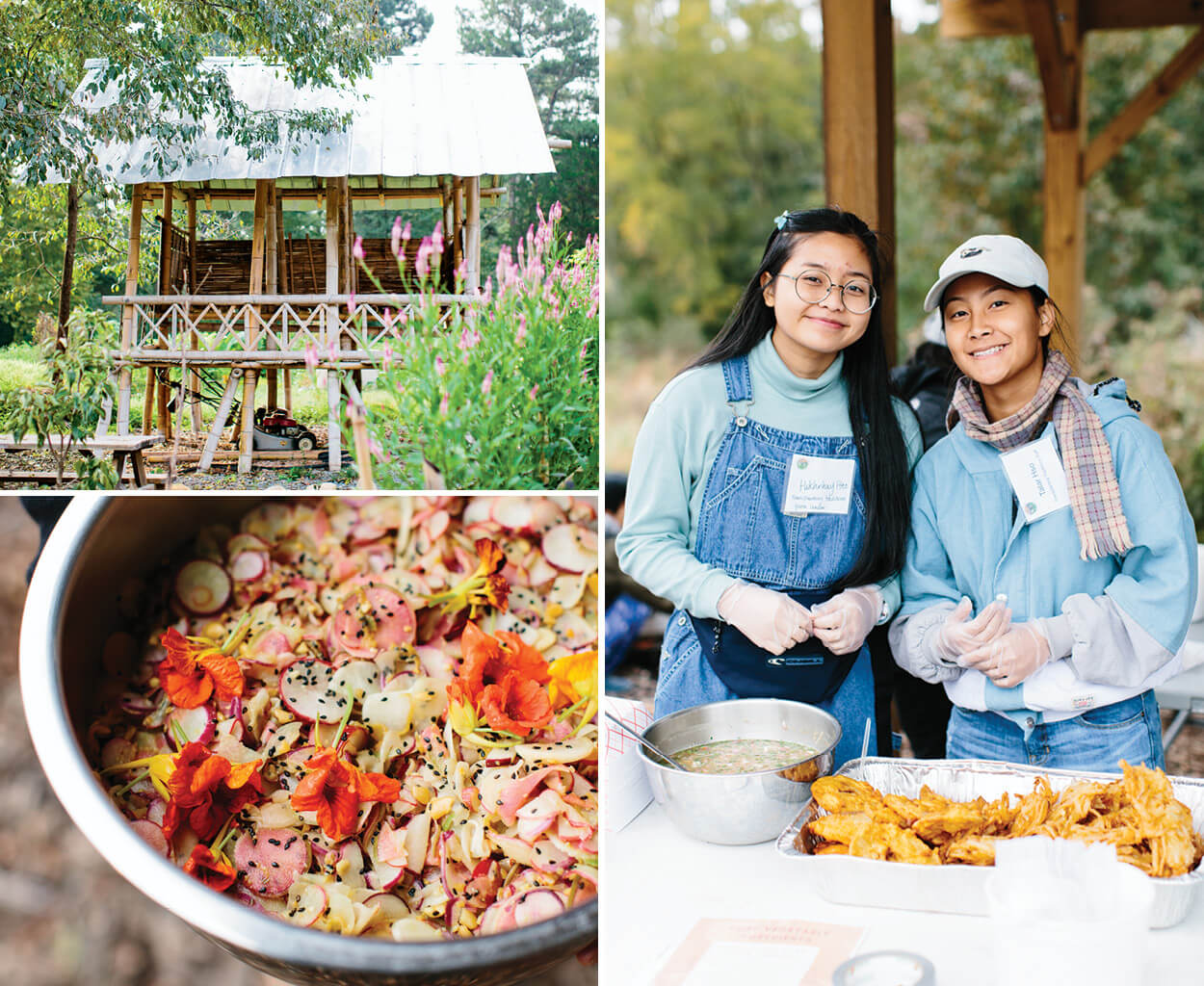 The farm’s bamboo house is a quiet spot to sample dishes — like fried water gourd and pumpkin with a radish and turnip salad — that are shared at events. photograph by Anagram Photo

The community farm began nearly a decade ago as a small gardening program for immigrants from all countries living in Chapel Hill. Kelly Owensby, the program’s founder, expected to serve mainly families from Latin America, but she quickly learned that refugees from Burma had the strongest desire to farm the flavors they knew and missed. “They just kept showing up,” she says.

Since its humble beginnings, Owensby’s garden program has transformed into a sprawling agricultural experiment in human and ecological adaptation. These days, three generations of families grow the produce of their homeland across eight acres of Orange County red clay. Hundreds of CSA boxes filled with their vegetables are distributed across the region and supply chefs, like Lantern’s Andrea Reusing and Snap Pea’s Jacob Boehm, with Southeast Asian ingredients that are locally grown.

Burma, as it’s still known today by the U.S. and other governments, is a land of geographic and cultural convergence. Its head rests in the Himalayas, its lingering tail in the tropical Andaman Sea; in between, the country swells to border China, India, Bangladesh, Laos, and Thailand. Though blessed with a rich history and natural beauty, since gaining independence from British colonial rule in 1948, the country has been embroiled in the world’s longest-running civil war. There are more than 100 distinct ethnic subgroups within its borders, and a string of authoritarian military regimes representing the largest group, the Burmans, has perpetuated cycles of repression and violence. With each wave of conflict, the ruling party has singled out a different ethnic group for intense persecution, which today sees hundreds of thousands of ethnic Rohingya fleeing the country.

“People tell me they always feel so much better after they’ve gone to work at the farm.”

Most refugees from the country end up in camps along the border in Thailand. Temporary cities that have existed for decades, these camps now collectively house close to 100,000 men, women, and children. After First Lady Laura Bush visited the largest camp, Mae La, in 2008, the Bush Administration decided to broaden U.S. support for resettlement of refugees from Burma. In the years that followed, more than 6,000 refugees resettled in North Carolina. Most of them had been farmers. For those who have found their way to Transplanting Traditions, the farm is the one place where the rules of their old life still apply, and the knowledge and skills that they inherited from their parents and grandparents still bear fruit.

“People tell me they always feel so much better after they’ve gone to work at the farm,” says Flicka Bateman, director of Orange County’s Refugee Support Center. A refugee can struggle to find work, learn to drive, speak English, and navigate our bureaucracy, she says. But on the farm, “growing things is concrete. Your hard work pays off.”

For Cingh Neam, the farm has become the focal point of her life in America. Neam grew up helping her family tend fields of rice, corn, mustard greens, and peppers beside their small village in Burma’s western mountains. The best time of the year was autumn harvest season, she says, “when the weather turns cool and your parents have more time to spend with you.” She fled her native country with her family more than a decade ago, after the government threatened her husband’s life. They spent a year and a half in Malaysia. From there, Neam, her husband, and their son were sent by a United Nations resettlement agency to live in North Carolina. She’s been trying to keep her hands in the soil ever since.

Early on, like many refugees from Burma, Neam found work in the late shift of the housekeeping service at UNC Chapel Hill. It was a good job, and she was grateful for it, but she was homesick for the outdoors. After learning about Transplanting Traditions through an announcement at church, she and her family applied for two beds to get started at the farm. Soon, she joined the other farmers in contributing to the CSA program. Eventually, she began selling at the Carrboro Farmers Market, where local high school students from the community, like Hso, Kee, and Thein, help out on weekends. “This is what we are used to,” Neam says, motioning toward the orderly rows of spinach and cabbage that she now grows on nearly an acre. “It brings back memories of home.” 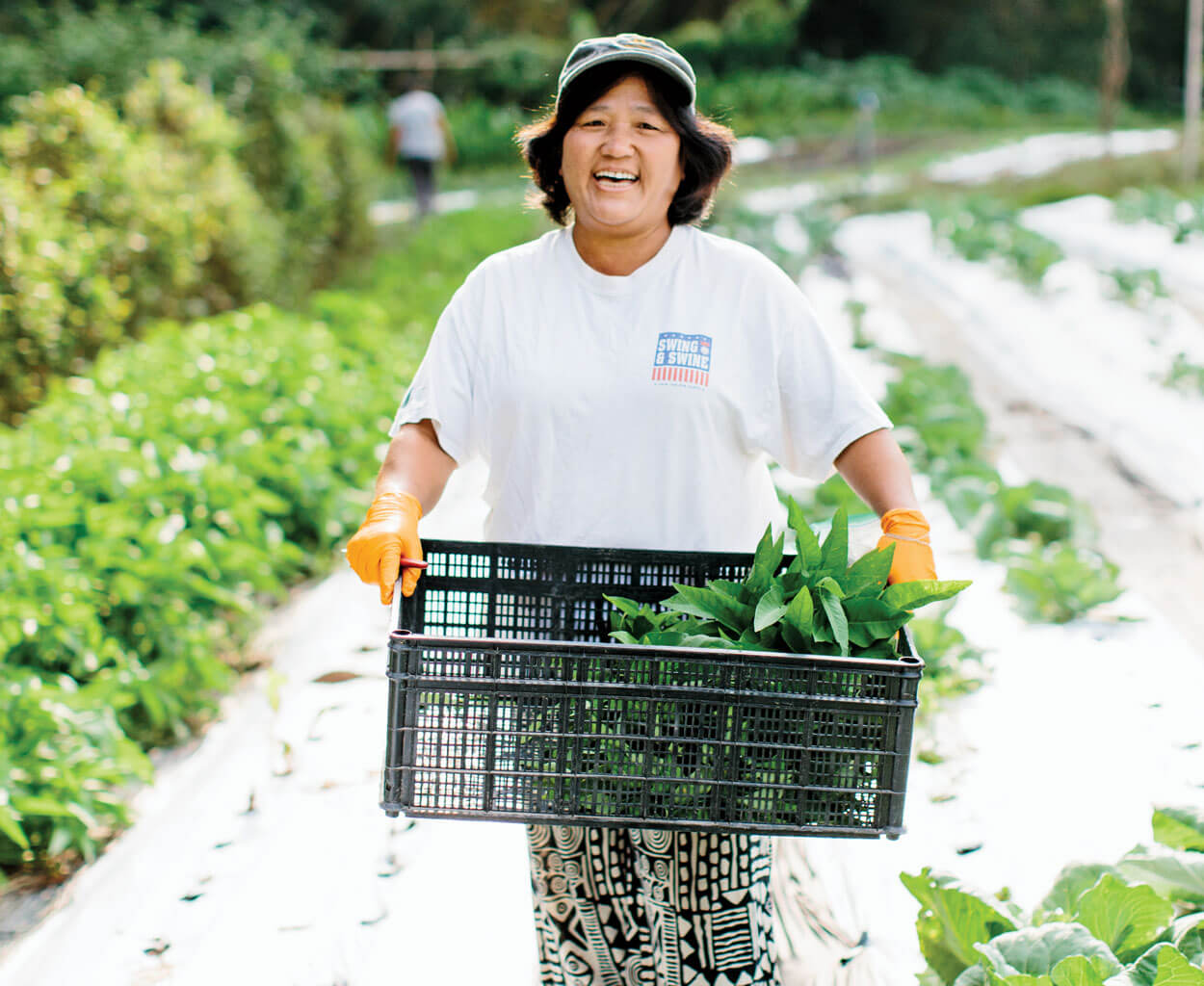 The ebb and flow of the seasons and the harsh realities of weather are also reminders of life before. When hurricanes tore through North Carolina last fall, the farmers here were resilient in the face of flooding and damaged crops. The broccoli and cabbage would take time to bounce back, but the tropical produce they’d planted was in full bloom after the punishing rains. What’s more, the bamboo huts that the farmers had built by hand years ago stood tall, unscathed. Banana trees, planted among the huts (for a look of home), were sending out towering new green leaves. Orange and yellow gourds dropped from bamboo lattices like swollen water balloons, and rows of taro plants fanned out their purple-edged, elephant-ear leaves.

Inside the farm’s greenhouse, a boat’s worth of tiny red Thai chili peppers dried on tall wooden benches, spread out in piles across slips of Chinese newspaper. The papers bore images of Typhoon Mangkhut, which had devastated the Philippines the same day that Florence reached central North Carolina.

After Florence, many farmers struggled to fill their produce orders. “All the farmers harvested what they had and shared,” says Tri Sa, one of Transplanting Traditions’ head farmers. (Sa and her family feed around 40 CSA members in Chapel Hill.) “If you are here and have a problem,” she says, “all the community will hear about your need.”

To do what you love — if you are lucky enough to have some choice — that is what matters.

Sa fled her country at age 17 and spent most of her adult life living along the Burmese border in Thailand, first under the belief that the move was temporary, and then, when forced to relocate away from the border to escape army incursions, with the knowledge that it was probably permanent. A problem like the weather doesn’t faze her. To work outside with others, to do what you love — if you are lucky enough to have some choice — that is what matters.

Raised in a farming family — tending fields of rice, okra, and tropical fruits like mango, papaya, and jackfruit — she is continuing the tradition in Chapel Hill. “Day and night, my parents grew vegetables outside, and I also survived and was happy in the fields,” she says. Now, her family’s farm allotment is one of the largest on the property. Like Neam, Sa first worked the night shift in housekeeping at the university — a job she still does in addition to farming. The extra income has gone toward her three daughters’ educations: Her youngest, Tha Da, is now in nursing school at North Carolina Central University.

When emigrants from Southeast Asia visit the farm, Sa is quick to offer advice on how to grow cherished, albeit finicky, homeland produce — bitter melon is a common request — and she’s just as quick to press into guests’ hands a bag of vegetables from the fields. She grows okra and tomatoes, kaffir lime leaves and na ga wah, a spicy herb akin to basil. “Even one day we cannot stay at home,” she says. “Out here, there is fresh air and exercise. Working with other people, talking together — I feel very happy here.”

She also feels hopeful that her daughters might choose to make a life in agriculture. “Farming is my family tradition, from my grandparents and my parents,” she says. “I see signs that my children will be the next farmers.”

There is reason for her optimism: Her eldest daughter, Mookho Paw, will take over as general manager at the farm later this year. To prepare, Paw attends a seminar at a Methodist church nearby to learn about organic pesticides; she’s also learning about spreadsheets and customer outreach — “the business side,” as she puts it. The Southeast Asian produce she was raised on will remain part of her crop rotation, but right now, she’s eager to learn how to grow beautiful flowers. Gorgeous, colorful Southern blooms. “I need to do my own thing,” she says. “Something new.”